I agree with the Irish left mainly on civil liberties (for example, the blasphemy law). I disagree with them primarily on the economy, crime, and foreign policy.

Some of the following have noble records in fighting for sexual and religious freedom in Ireland, the rights of gays and atheists, separation of church and state, opposition to censorship, and so on.

But that does not mean that their foreign policy or economic ideas make any sense.

Search for historical statements by the Irish left

For reasons I discuss elsewhere, the Irish left is far more likely than the Irish right to make embarrassing statements supporting foreign non-democrats (such as Cuba, Nicaragua, Palestine, Libya, Vietnam and the Soviet Union). Such statements need to be remembered.

Proinsias De Rossa in 2004 says that: "Growing up just after the second World War, I could not understand how the world stood by while six million Jews were gassed, burned and buried alive."
In 1956, De Rossa joined the IRA, the only Irish group that had supported the Nazis and had worked for the Nazis.
Not a brief error either. He stayed with the IRA until 1970.

His 2004 article above is also comparing modern Israel to the Nazis. 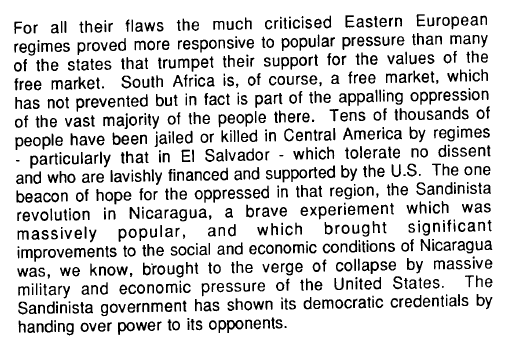 Proinsias De Rossa's support for communist Nicaragua.
From a 1990 speech:

He praises the Eastern Bloc for finally (after 40 years) letting its slaves go, and says the Eastern Bloc countries have therefore "proved more responsive to popular pressure" than the western countries which have allowed their people actually pick the government for all of those 40 years!

Clare Daly, TD and MEP, is a radical left politician with the usual left-wing hostility to the West and sympathy for its enemies. 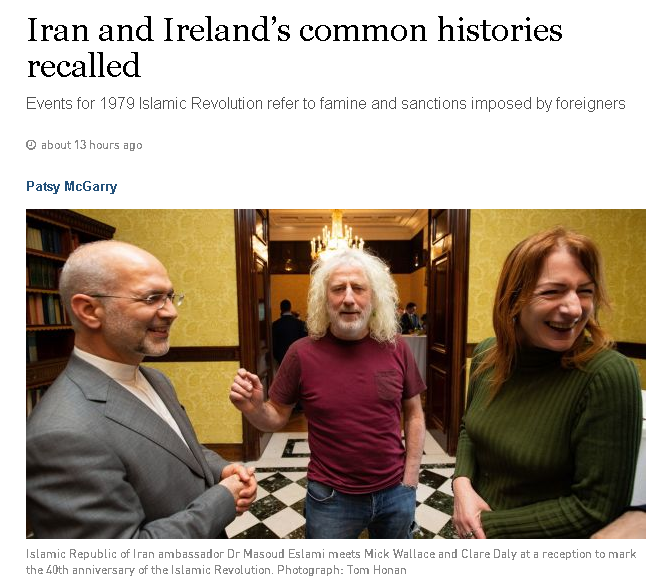 Mick Wallace and Clare Daly hanging out with a lackey of the Iranian regime, Feb 2019.
From here. 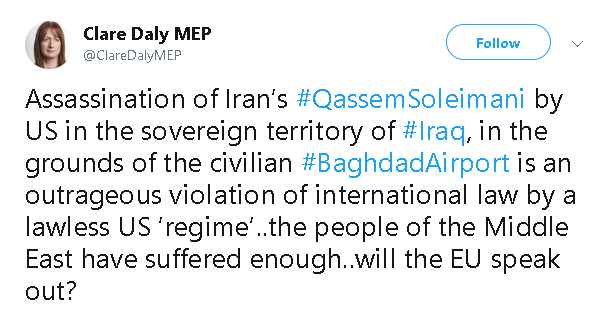 Clare Daly, 3 Jan 2020, is angry at Trump's daring assassination of Qasem Soleimani, the head of the terrorist Iranian Quds Force, a man with the blood of hundreds of thousands in Syria on his hands.
She describes the democratic US government as a "regime". While defending the unelected Iranian regime that jails and murders its critics.

Clare Daly and Mick Wallace visit Iraq in March 2021 in solidarity with the Iran-backed Popular Mobilization Forces, who have close links to Iran and Hezbollah.
"Feminist" Clare Daly comically wears the brutal black chador because her Shia religious maniac hosts want to (and do) force this on all women. She meekly complies because they hate America. 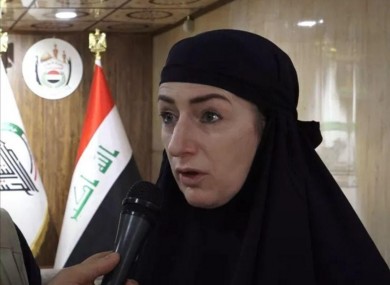 This is what the feminist-left-Islamist alliance looks like.
Clare Daly in above video. 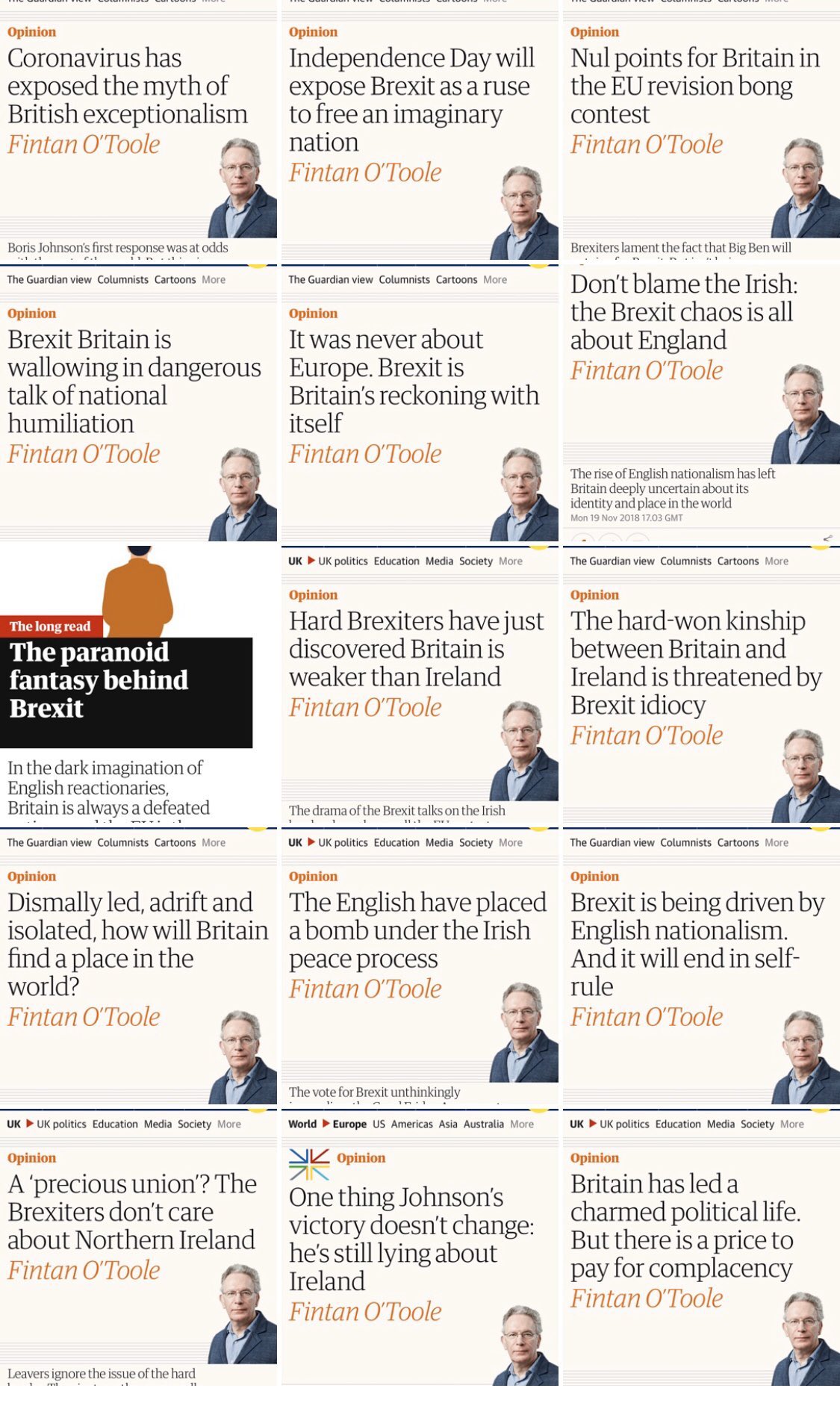 Fintan O'Toole changed after 2016. His sneering at America was largely replaced with sneering at Britain.
He was driven absolutely mad by Britain's decision to leave the EU. He became almost unhinged by hatred of Brexit Britain. He must have written a million words sneering at every aspect of modern Britain, abusing British culture and society and stereotyping British history.
Screenshots from here.

The tragedy of all this Brexit Anglophobia is that Fintan O'Toole has always been a strong opponent of SF-IRA.
This magnificent piece about the IRA is a work of art.
See larger.
From 18 Oct 2022, after the Irish women's football team were filmed doing an "Up the Ra" IRA chant.

Eamonn McCann is not all bad. He has been a pioneer in atheist secularism both North and South of the border. He has been fairly anti-sectarian on the NI issue.

But he is also a radical leftist who is anti-American, anti-Israel and, like so many left-wing "atheists", pro-Islam. He is a Trotskyist and a member of the pro-jihad SWP. He openly supports the Islamic religious jihad groups Hamas and Hezbollah. His solidarity with right-wing Islam abroad seems rather a betrayal of his left-wing secular ideas at home, to say the least. 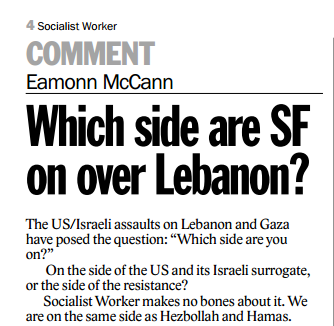 Eamonn McCann declares open support for the Islamic religious jihad: "The US/Israeli assaults on Lebanon and Gaza have posed the question: "Which side are you on?" On the side of the US and its Israeli surrogate, or the side of the resistance? Socialist Worker makes no bones about it. We are on the same side as Hezbollah and Hamas." 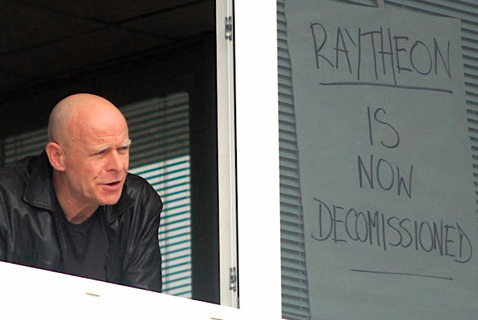 Eamonn McCann photographed with a mob looting the offices of US defence company Raytheon, Derry, Aug 2006, because it supported Israel.
Shame on him. 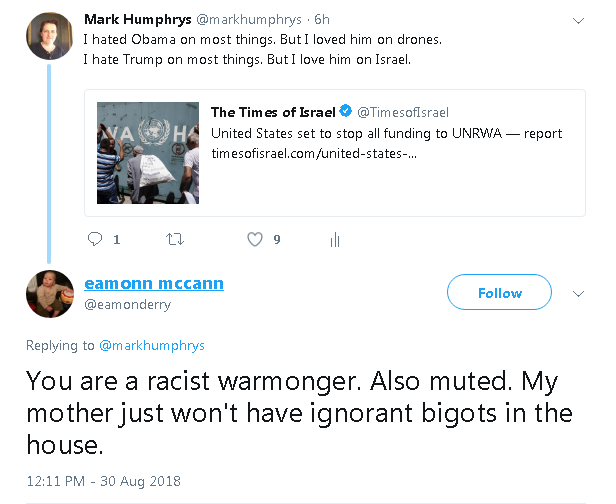 The anti-Israel fanatic Eamonn McCann, 30 Aug 2018, calls me "a racist warmonger".
Shame on the Irish Times for giving this libellous extremist a platform.


Vincent Browne, Oct 2012, says Israel is a "cancer".
He says that Israel, not Islamism, is the root cause of the global Islamist violence.
He says: "Israel is the cancer in foreign affairs. It polarises the Islamic community of the world against the rest of the world. And unless you deal with the problem of Israel and the problem of Palestinians in that part of the world there is going to be conflict".
This is what the left believes. This is why I am not a leftist.


Here's a good example of why in 2006 I said Mary Fitzgerald does a line in whitewash rather than exposure.
See the article: "Muslims divided on cleric's teachings", Mary Fitzgerald, Irish Times, October 6, 2006.

Azzam Tamimi in 2006 calls for the elimination of Israel: "anybody in the world, with faith or without faith, must come together in order to eradicate this cancer from the body of humanity."
In the article on Al-Qaradawi above, Mary Fitzgerald quotes Azzam Tamimi as if he is some reasonable commentator. 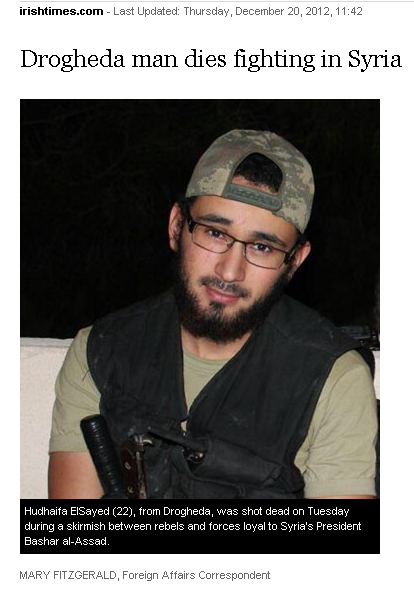 A 22 year old Irish Muslim is killed fighting in Syria in Dec 2012.
What is the one question most people would ask? That's right: What was he fighting for?
Does Mary Fitzgerald address that question in the article? No.
The article has an almost comically misleading headline: "Drogheda man"! How pee-cee can you get.

Fr. Joe Jones, Catholic chaplain at Dublin City University, praises the Islamic jihadist, 14 Feb 2013.
Em, are you sure you know what he was fighting for? 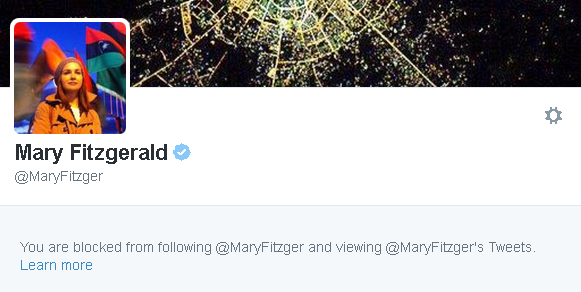 How Mary Fitzgerald responded to this page.
Pretty unimpressive. Why not try debating me?

Phoenix magazine mentions me in an article about Mary Fitzgerald in Sept 2010, and lies about me.

My section on Mary Fitzgerald on my site in 2009.
I never misspelled "Islamist" or "whitewash".
(Check the Internet Archive here and here if you don't believe me.) 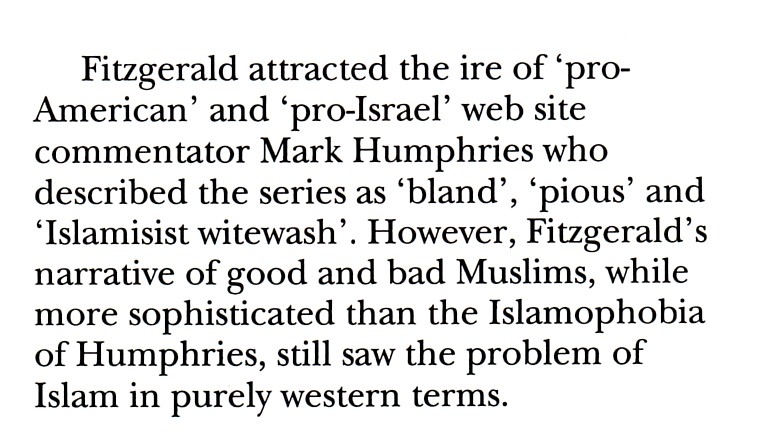