I opposed Barack Obama since the first day I heard about him in 2007.

I predicted his plan to scuttle out of the Middle East would lead to the jihad running rampant in Iraq, and that is exactly what happened.

Unforgiveably, he ignored the cries of the Iranian and Syrian people for freedom.

He was surely one of the worst US Presidents ever, and will be succeeded by another celebrity idiot.

If the Americans become like the Europeans, who will be left to defend the West against its enemies? 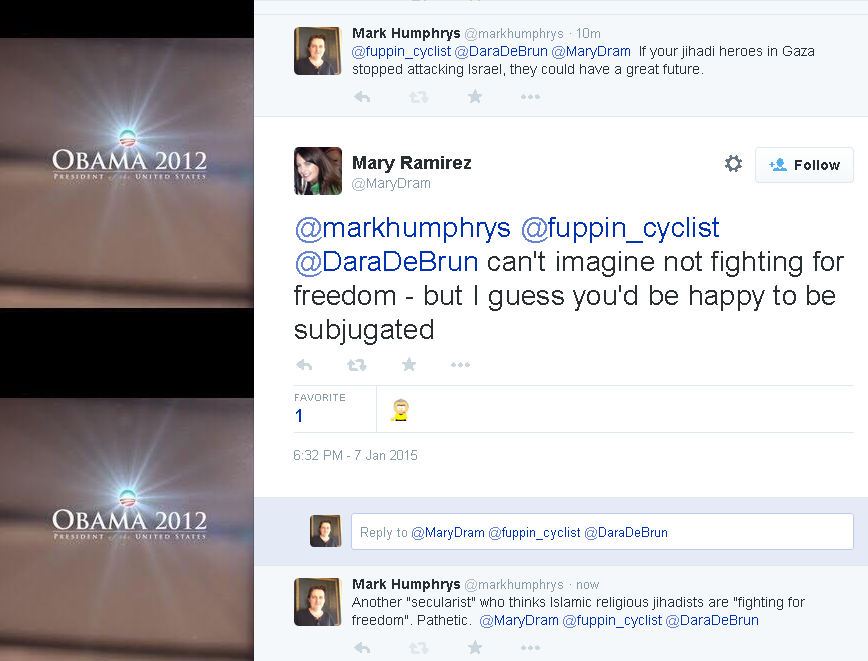 The kind of idiot that supports Obama: Irish-American Mary Ramirez.
A self-described "secularist" in Jan 2015 who thinks jihadis are fighting for a kuffar concept called "freedom".
Yes, that is her background. In 2015!
Obama supporters are truly the worst type of Americans. 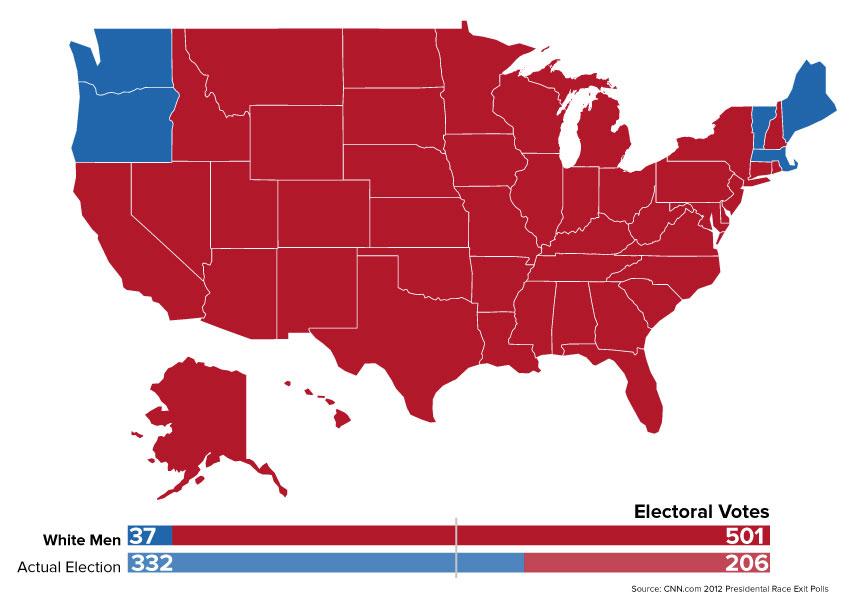 2012 US Presidential Election result if only white men voted.
From here.
At least white men aren't to blame for this mess!

Obama is a partisan, divisive figure

Obama fails to unite the country.
He is the most partisan first-year president in history (since Gallup started polling).
From Gallup.

Obama on the Cold War


Reagan speech on the 40th anniversary of D-Day, 1984, says what Obama doesn't have the guts to about Russia.
"In spite of our great efforts and successes, not all that followed the end of the war was happy or planned. Some liberated countries were lost. The great sadness of this loss echoes down to our own time in the streets of Warsaw, Prague, and East Berlin. The Soviet troops that came to the center of this continent did not leave when peace came. They're still there, uninvited, unwanted, unyielding, almost forty years after the war. Because of this, allied forces still stand on this continent. Today, as forty years ago, our armies are here for only one purpose: to protect and defend democracy. ... We in America have learned bitter lessons from two world wars. It is better to be here ready to protect the peace, than to take blind shelter across the sea, rushing to respond only after freedom is lost. We've learned that isolationism never was and never will be an acceptable response to tyrannical governments with an expansionist intent."
Reagan shows what a real American president should be like. Let us hope America survives its stupid fling with Obama.

In 2001-08, George W. Bush was very close to Tony Blair. British lefties and small-minded little Englanders complained about Blair being "Bush's poodle". For example, see the annoying The Trial of Tony Blair (2007) and the crap speech in Love Actually (2003).

The Queen tries to get rid of the iPod on eBay.

Guido Fawkes blogger Harry Cole calls President Obama "both a hypocrite and a coward" for refusing to back the people of the Falkland Islands.
BBC Three, "Free Speech", 27 March 2013. 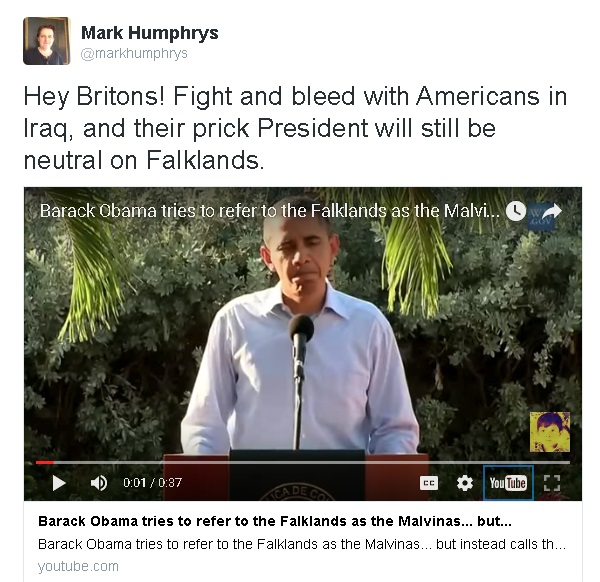 In defence of Obama

Can anything be written in defence of Obama? Yes. Despite his awful rhetoric, Obama's actions have been more cautious. He has continued the use of violence against the global jihad. He could be a lot worse.

It is interesting to consider that Obama is already a "war criminal" by the definition the left uses for Bush. Obama is assassinating jihadis from the air without trial, even sometimes killing their families and civilians as collateral damage. Yet why the silence from the left? Why no calls to arrest Obama and try him as a war criminal? He is doing exactly the same thing people condemned Israel for, yet we hear only silence.

Silence from the left, that is. The right doesn't mind that he is doing such things, and it did not condemn Bush and Israel for doing them. 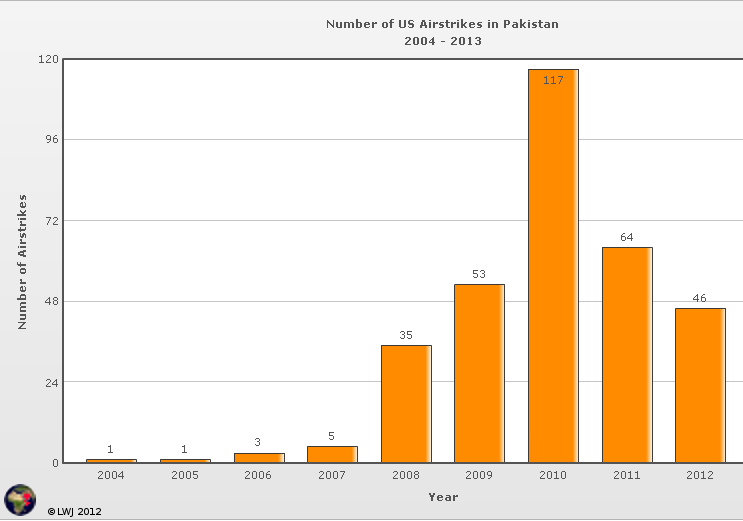 Air strikes in Pakistan have escalated under Obama. He's not all bad.
From The Long War Journal as at Jan 2013. (2013 bar removed since it is incomplete.) 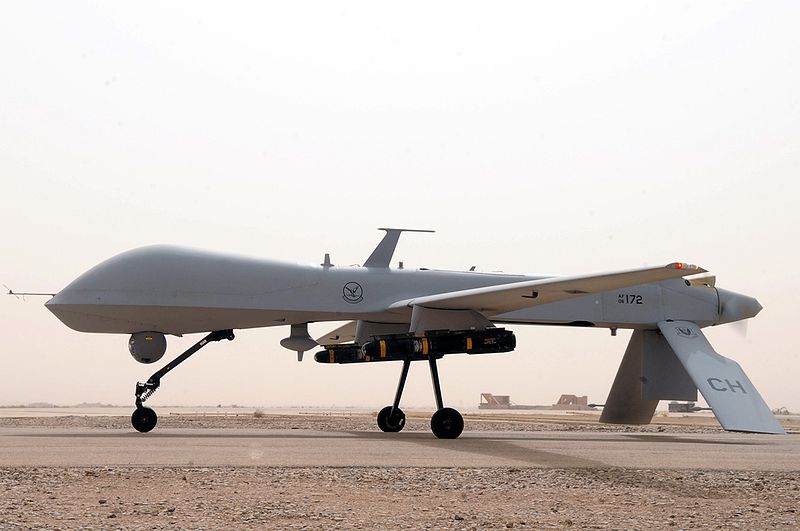 MQ-1 Predator drone, of the type that President Obama is using to kill jihadis without trial.
Image from here. More images here.

Obama isn't all bad. His rhetoric is dreadful (attacking Bush, Guantanamo, and all the pre-2008 security measures). But in his actions, he tends to just carry on Bush's work. It's hard to admire him because of his rhetoric. But I am glad he is a hypocrite. 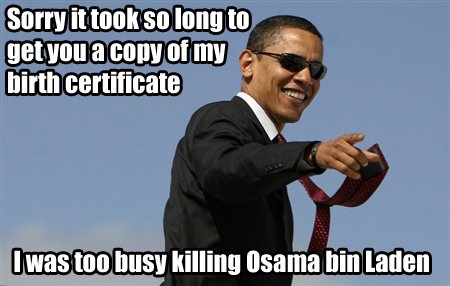 Pro-Obama poster, from lefties who suddenly support the War on Islamic Terror.
(And may even support it for days before returning to normal.)
(In fact, the very site that displays this, the viper-tongued, far-left Daily Kos, is the same site that, after the killing of US contractors, including a Navy SEAL veteran in Iraq in 2004, said: "I feel nothing ... Screw them." And now we're meant to believe these guys support the War on Islamic Terror?) 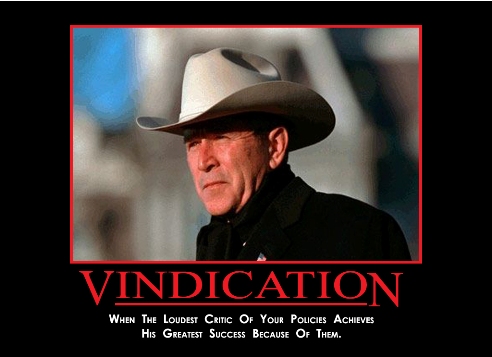 Pro-Bush reply, from people who have always supported the war. From here.

"Obama Supporters Actually Hate Obama's Policies".
Leftie group wearechange.org, Oct 2012, points out to Obama voters how Obama has carried on many of Bush's policies against jihadists.
They cleverly portray them as Romney policies, and then, once the Obama voter has condemned them, they reveal they are Obama policies.
Despite the awful rhetoric, Obama's not all bad. I like that he's a hypocrite.

Comparison of Bush and Obama

"Mr. Obama, you are a newcomer [to politics]. Wait until your sweat dries and get some experience. Be careful not to read just any paper put in front of you or repeat any statement recommended. ... [American officials] bigger than you, more bullying than you, couldn't do a damn thing [about Iran], let alone you."
- Enemy leader Ahmadinejad shows he is not afraid of Obama's America, Apr 2010. He has only contempt for the weakling.
A kinder, weaker America may make the left feel better, but to the thugs and tyrants of the world it means one thing: a green light.

Obama "has no feelings for Europe" and "prefers to look East rather than West".
- State Department cable leaked by Wikileaks in Nov 2010 nails what is wrong with Obama.
How did Americans elect this guy as the leader of the free world?
Search for original full text cable. If you know where it is, tell me here. 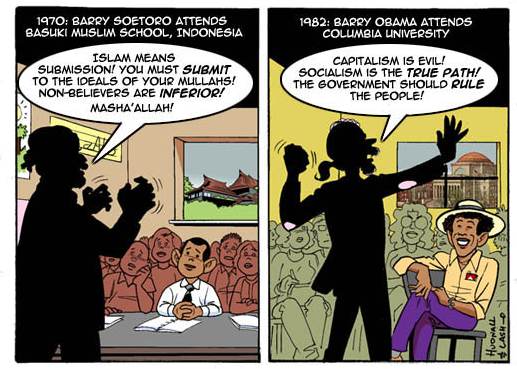 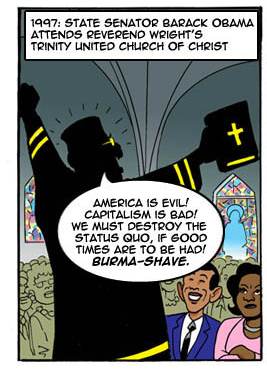 Obama's background explains everything about him.
A head full of crap ideas all his life.
What no one can explain to me is why Americans elected this guy.
"Obama Nation" cartoon from James Hudnall and Batton Lash.
See more cartoons (and search).