Before 2011, Michael D. Higgins of the Labour Party was one of the leaders of anti-capitalist, anti-American and anti-Israel politics in Ireland. For decades he attacked the free market, and attacked the West's two frontline states - America and Israel - with his trademark divisive, self-righteous rhetoric.

In 2011, he was elected as Irish President. The Irish Presidency is (or was) meant to be a ceremonial role, with little power, meeting and greeting people and promoting Ireland and not offending anyone. But since Mary Robinson in 1990, the position of President has become increasingly politicised. Presidents now feel the need to deliver pious and annoying little homilies, like Pope Francis or Prince Charles. And if there is one thing Michael D. likes, it is delivering pious and annoying little homilies.

But I must say it has not been as bad as I feared. He has been an incredibly annoying President. But he was worse before 2011. The position has put some restriction on his opinions. He was far more offensive before 2011. 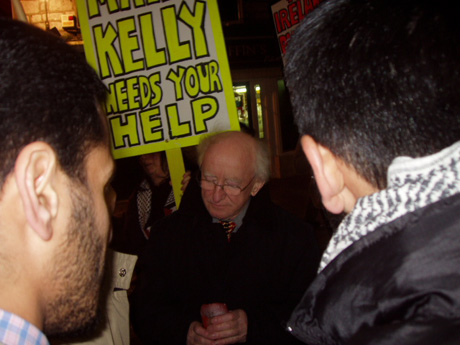 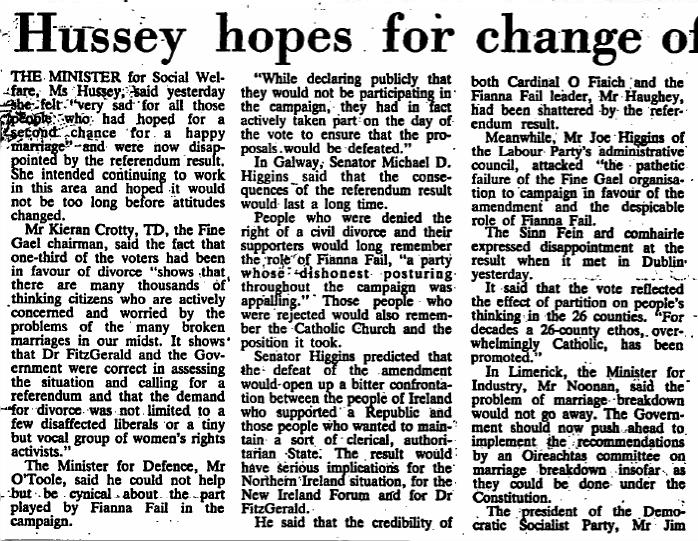 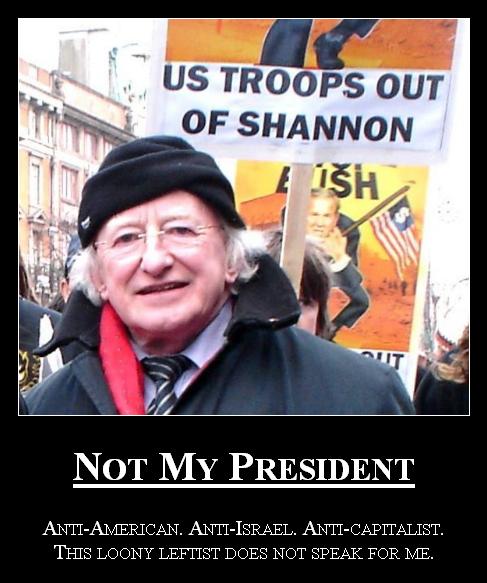 Like all politicians, he speaks for the people who voted for him.
He does not speak for all of us.

Michael D. Higgins has for years used his platform as President to attack the free market and promote his socialist ideas. Not my President. Not my ideas.

How the Celtic Tiger improved Irish quality of life.
From Daniel J. Mitchell's piece above.
"Maybe I'm just old fashioned, but I'd rather live in a "selfish" world that gives me doctors, cars, and central heating. But to a member of the political elite like Mr. Higgins, this kind of prosperity probably spoils people ... Better for people to live noble lives of poverty and deprivation." 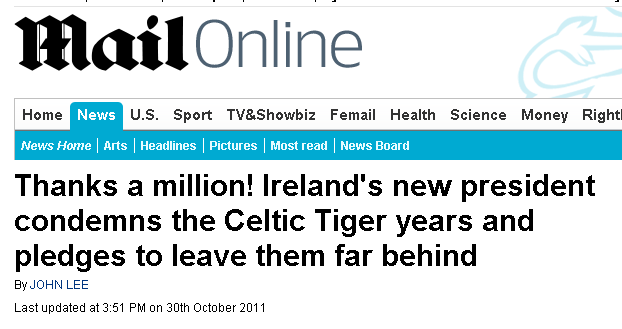 Here we go: Years of headlines like this, portraying a terrible image of Ireland abroad.
Michael D., you don't speak for me.

To me, Michael D. Higgins is the political heir of Eamon de Valera - the leader of an inward-looking, neutral Ireland that refuses to support our western democratic allies, but views itself instead (absurdly) as some kind of innocent peasant ex-colony that should be allied with the Third World.
Dev's 1943 St. Patrick's Day speech praising a frugal Ireland that rejects materialism sounds pretty much like Michael D.'s attacks on the greed of the Celtic Tiger. 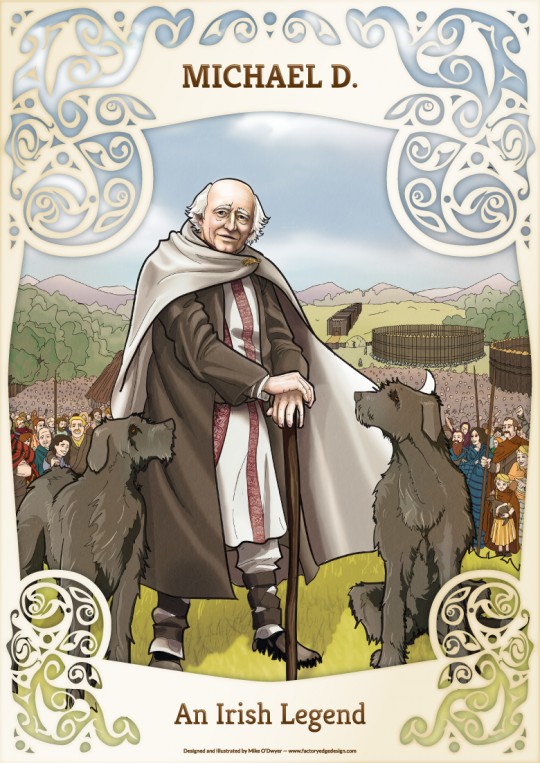 This poster is trying to celebrate Michael D. Higgins.
But in fact I think they nail what is wrong with him.
If you reject - like Pearse, De Valera and Higgins - Ireland's place as an ally of the democratic West, the West led by Britain and America that has fought titanic struggles against fascism, communism and Islamism to defend freedom, then what is left to you?
Irish nationalists that reject this narrative always end up portraying Ireland as some dull boring backwater of impoverished illiterate peasants, as this poster does. It is a deeply unappealing view of Ireland, and quite imaginary.
I prefer the modern, globalised, Celtic Tiger Ireland of US high-tech multinationals, booming city centres and soaring house prices (because everyone wants to live here). That's my Ireland.

"I am effete and proud of it. I am also a lefty pinko. I was told that by no less than our mutual friend, Kader Asmal, and coming from him, it was the greatest compliment I ever received in my life. Myself and Deputy Michael D. Higgins are two old lefty pinkos. I am an effete lefty pinko and I was part of the commentariat as well for a period."
- David Norris sums it up in his usual style in Mar 2007.