Islam in Ireland - The Clonskeagh mosque

The Muslim Brotherhood (founded 1928) is an extremist organisation devoted to the ideology of Islamism. It is the ultimate origin of a lot of the Islamic oppression and violence plaguing the world today.

It is a disgrace that anyone living in Ireland would support the Muslim Brotherhood or the ideology of Islamism. The Clonskeagh mosque is a symbol of Ireland's failure to criticise and confront Islamic extremism. 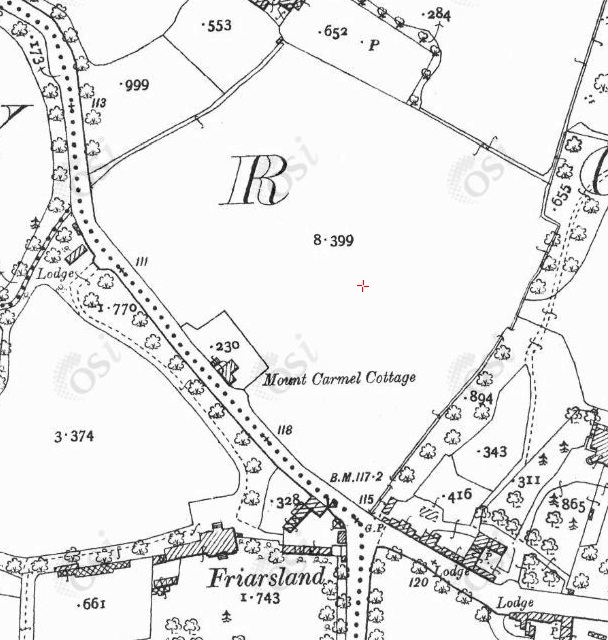 The Clonskeagh mosque site in the 1887 to 1913 period.
Has Ireland got rid of one oppressive religion only to invite in another?

Some pro-Halawa leftists claim that linking Clonskeagh to the Muslim Brotherhood is a "conspiracy theory". Some even say that the conspiracy theory comes from my website. So this is for them.

Here is a selection of people who say the Clonskeagh mosque, and its imam Hussein Halawa, are linked to the Muslim Brotherhood:

Extract from the original copy of: Egypt acquits Irish-Egyptian after 4 years in prison, Al Jazeera, 18 Sept 2017.
This used to say: "Ibrahim Halawa - arrested at age 17 ... is the son of a senior Muslim Brotherhood member".
They later removed that paragraph. 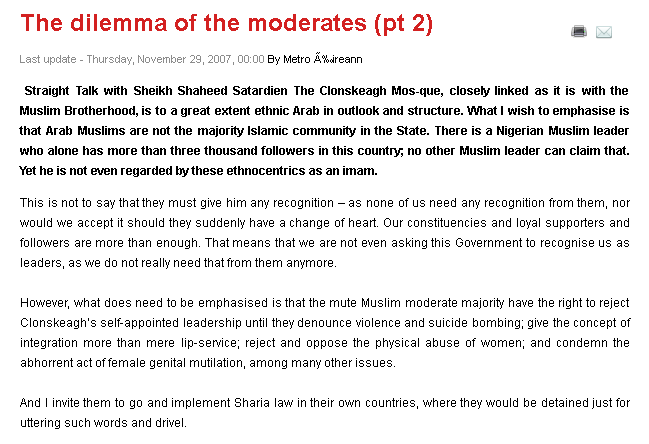 Shaheed Satardien says Clonskeagh is Muslim Brotherhood. So it's not just "Islamophobes" who say that.
See wider screenshot. From 2007 article.
See more articles. 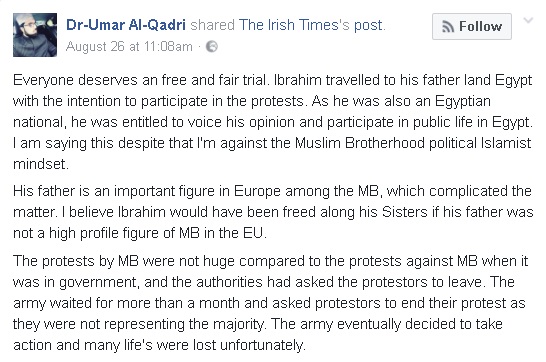 Umar Al-Qadri says Halawa is Muslim Brotherhood. So it's not just "Islamophobes" who say that.
See wider screenshot. From 2017 post on his facebook. 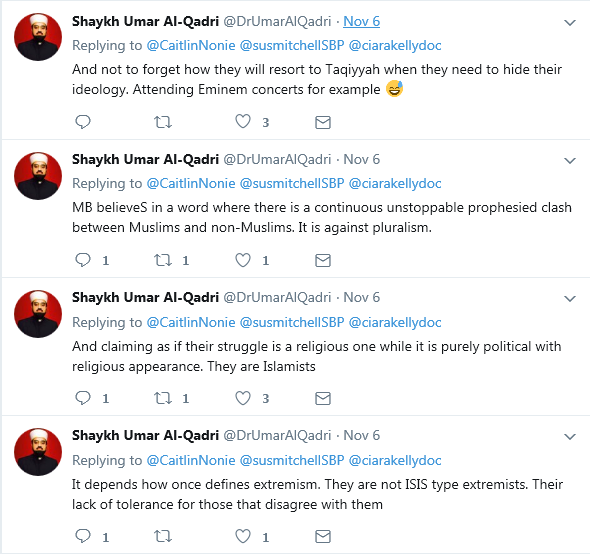 Umar Al-Qadri in Nov 2017, reacting to Ibrahim Halawa's claim on the Late Late Show that he planned to go to an Eminem concert but somehow ended up speaking on stage at a Muslim Brotherhood rally.
Al Qadri says: "they will resort to Taqiyyah when they need to hide their ideology". He said it, not me.

The Muslim Brotherhood and the "Free Halawa" campaign

The official Muslim Brotherhood can be found linked to the "Free Ibrahim Halawa" campaign. 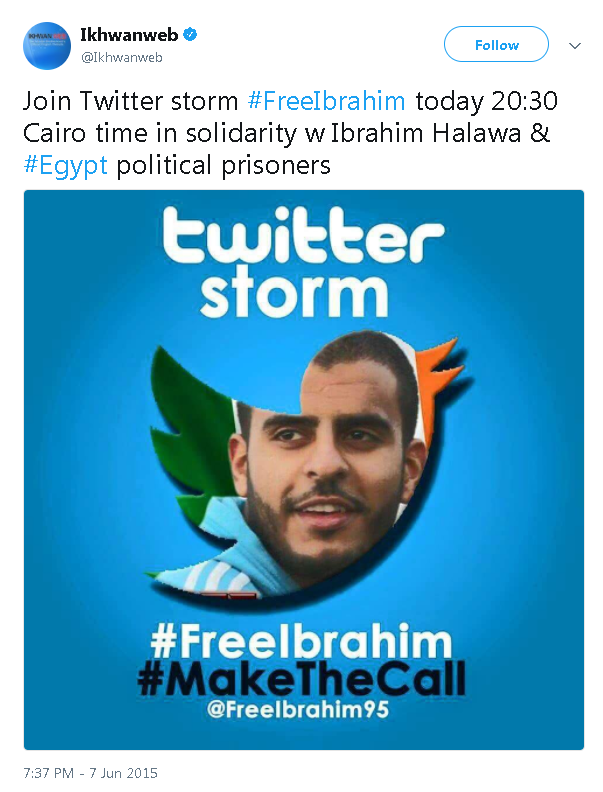 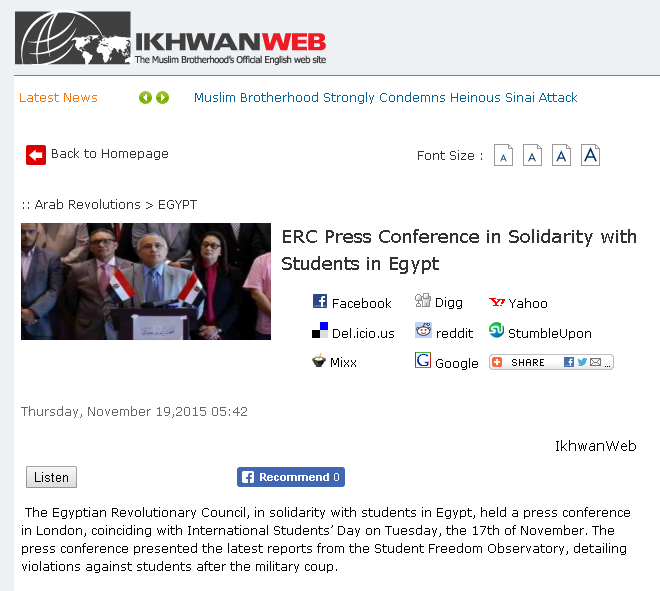 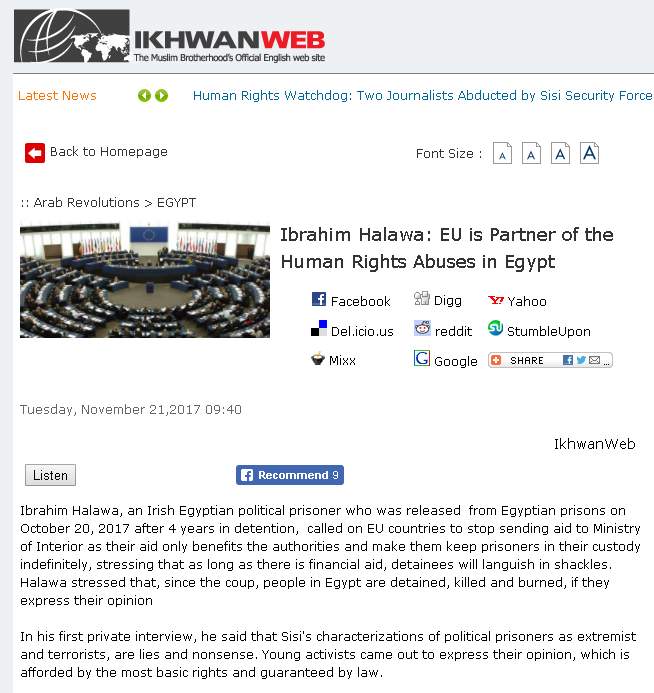 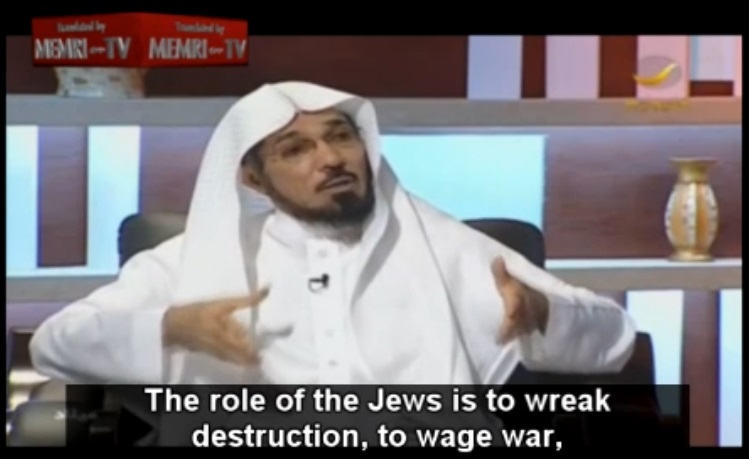 Anti-semitic hate preacher Salman al-Ouda spoke at Clonskeagh mosque in 2007.
Here in 2012, he questions the Holocaust, attacks Jews, and says Jews use human blood for Passover matzos. He says: "The role of the Jews is to wreak destruction, to wage war, and to practice deception and extortion."
Click to play. From MEMRI. See transcript. 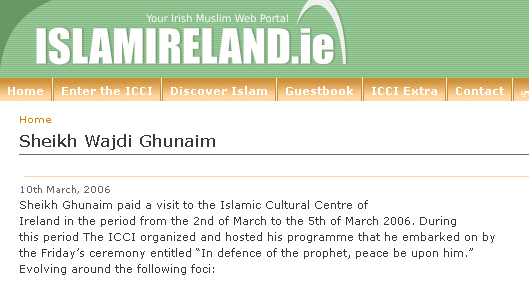 Muslim Brotherhood fascist Wagdi Ghoneim has repeatedly been invited to the Clonskeagh mosque. 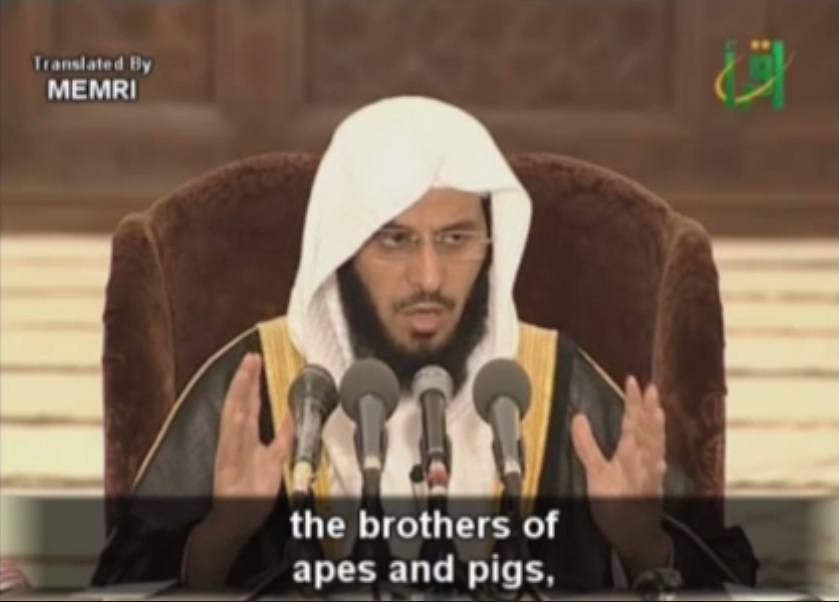 Saudi hate preacher Aid al-Qarni spoke at Clonskeagh mosque in May 2015.
In this 2005 video, he calls the Jews "the brothers of apes and pigs".
In Oct 2015, he called for knife attacks against the Jews.
Click to play. From MEMRI. See transcript.
See also: Saudi Cleric 'Aed Al-Qarni: Throats Must be Slit and Skulls Must be Shattered; This is the Path to Victory (pay to view).

"There is no such thing as democracy. Democracy is founded on principles of heresy. The ten principles of democracy constitute utter heresy: the freedom of religion, the freedom of belief - we have a punishment for apostasy ... In Egypt, there are 80 million citizens, only five million of whom are Crusaders ... They are a minority. A minority in a Muslim country has a certain status. Don't say everyone is equal. Don't tell me that every citizen enjoys equal and complete rights. Says who?! How can you possibly draw a parallel between the majority and a minority? ... There are 70 million of us! So how can you talk to me about equal rights? Whenever I build a mosque, he deserves to build a church?! Says who?"
- Muslim Brotherhood fascist Wagdi Ghoneim, Aug 2011, attacks democracy and freedom of religion.
And he supports the oppression of the Coptic Christians in Egypt. See image.
Wagdi Ghoneim has repeatedly been invited to the Clonskeagh mosque. He appears on Halawa social media.

Conspiracy theory: Hussein Halawa says Islamic terrorist attacks on tourists in Egypt are probably fakes, caused by "paid agents".
He blames "the hidden hands of the enemies of Egypt".
From Visa Is a Pledge of Security, "Sheikh Hussain Halawah, European Council for Fatwa and Research", 26 April 2006.

European Council for Fatwa and Research

Hussein Halawa is Secretary-General of the European Council for Fatwa and Research, based at the ICCI at Clonskeagh. 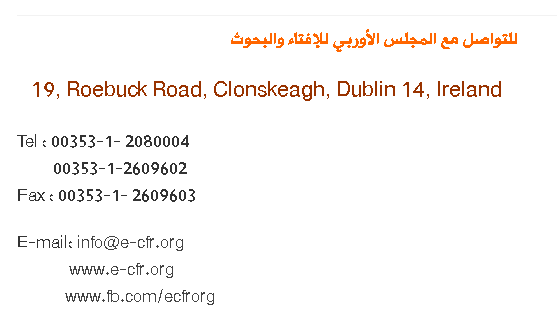 The ECFR itself gives Clonskeagh as its contact address. 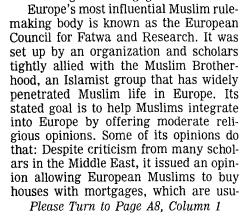 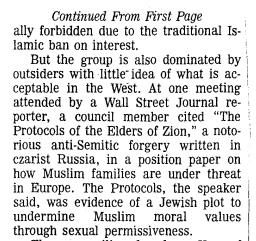 Article on the ECFR, Wall Street Journal, 4 Aug 2005.
Says the ECFR is Muslim Brotherhood.
Says the ECFR used the anti-Semitic forgery The Protocols of the Elders of Zion in its theological deliberations.

Yusuf Al-Qaradawi praises Hitler and the Holocaust.
Al-Qaradawi was until 2018 President of the European Council for Fatwa and Research.

Leading Muslim Brotherhood figure Salah Soltan (also spelt "Sultan") claims that the Jews kidnap people to use their blood for making bread.
Salah Soltan is also a member of the European Council for Fatwa and Research.

Qaradawi's International Union of Muslim Scholars (IUMS) issues a fatwa in 2004 calling for the killing of American troops in Iraq.
Note that Ireland's good name is dragged into the mud by this vile jihadi group: "Concluding a two-day meeting in the Lebanese capital, Beirut, the Dublin-based body said this kind of jihad does not necessitate a central command to organize military operations, but willing Muslims can do it on their own." 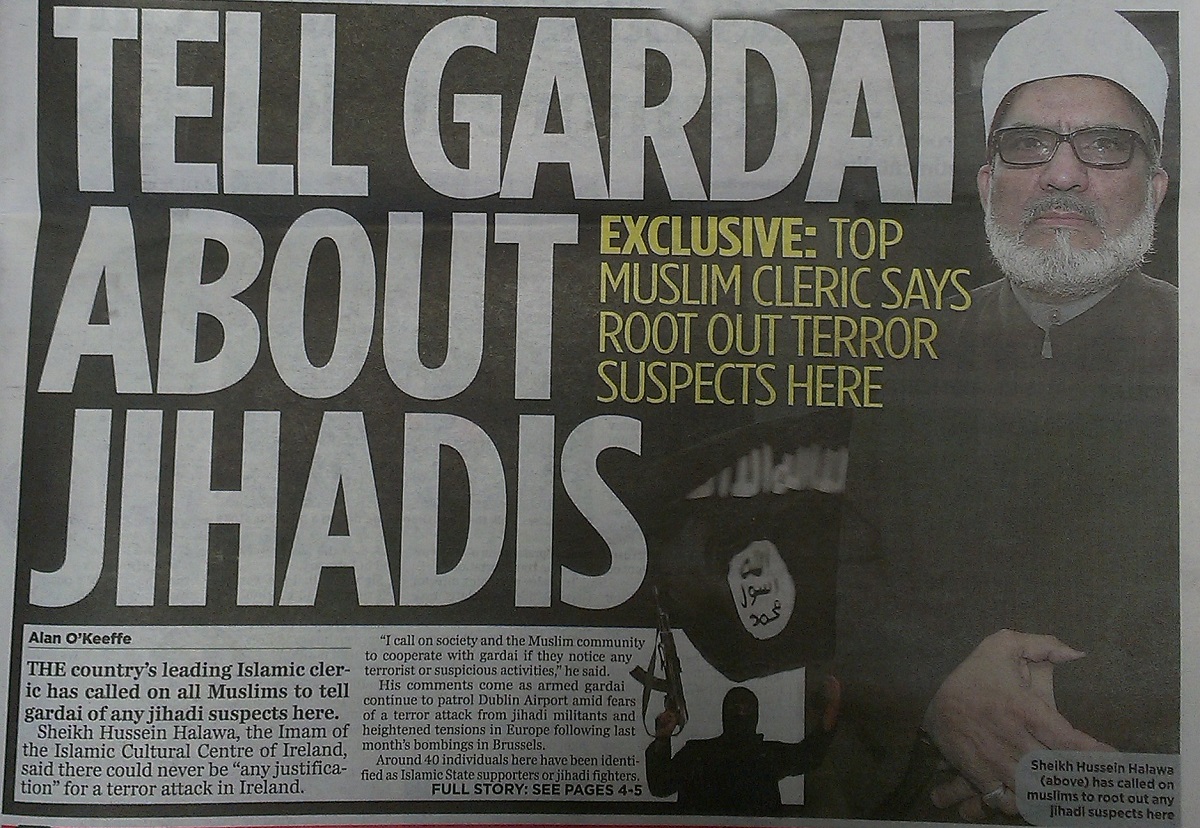 Ludicrous article, 7 Apr 2016, in The Herald, Dublin, claiming that Hussein Halawa is some kind of "opponent" of jihad. 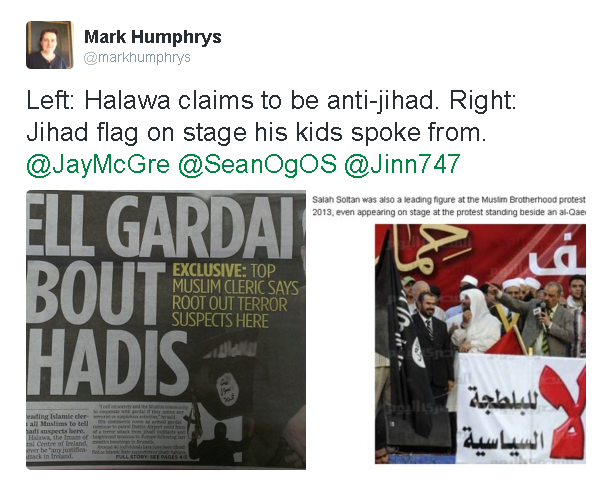 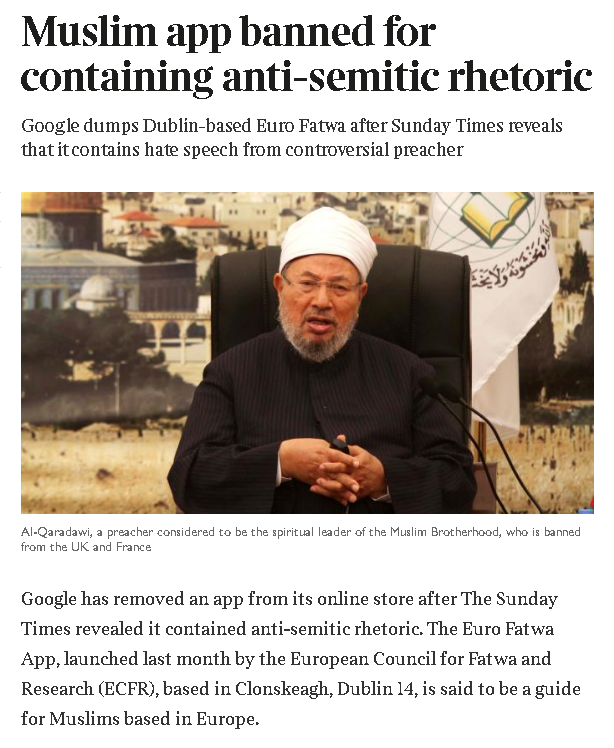 Death for gays. Death for apostates.

The ECFR apparently calls for death for homosexuals.
This Fatwa on Homosexuality and Lesbianism was published on Yusuf al-Qaradawi's IslamOnline in 2004.

The ECFR apparently calls for death for apostates.
This Fatwa on Apostasy was published on Yusuf al-Qaradawi's IslamOnline in 2003.

Wikileaks cables on the Clonskeagh mosque

RTE Prime Time, on the Clonskeagh mosque, 14 July 2016, is a breakthrough.
Finally, on Irish TV, we see:

Fair play to Richard Downes, whose previous work I had not been a fan of. 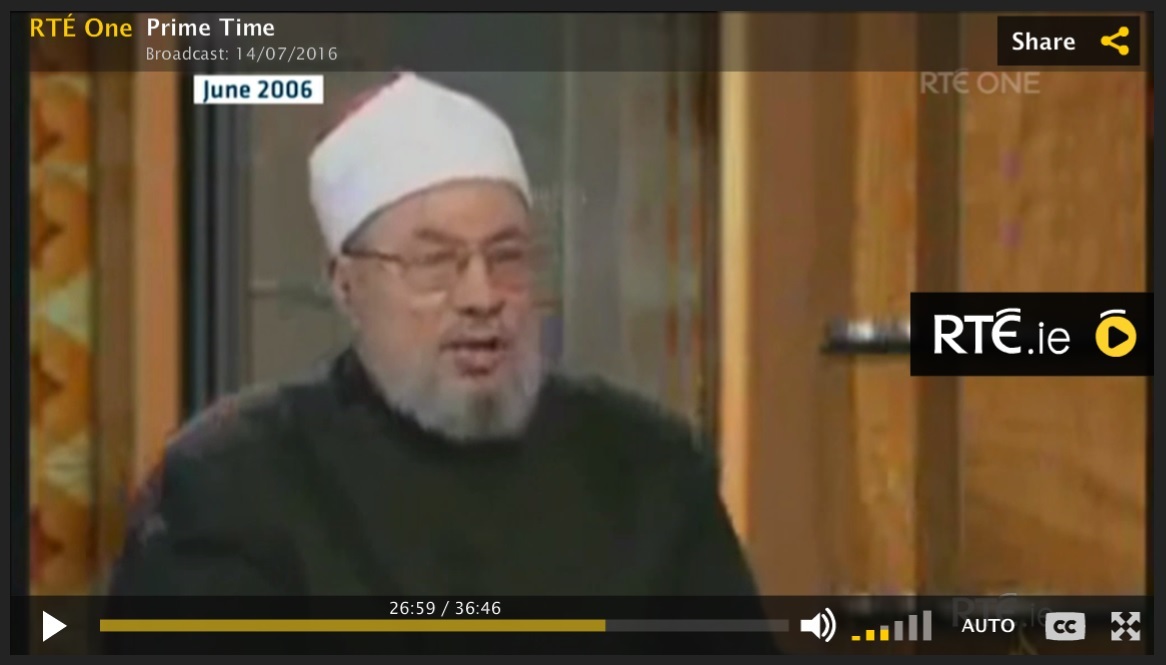 Finally, after 10 years, the 2006 video of Qaradawi calling for death for gays is shown on Irish TV.

The far-right religious conservative Ali Selim, general secretary of the Irish Council of Imams, is linked to the Clonskeagh mosque.
Ali Selim of the Clonskeagh mosque supports the blasphemy law, RTE, Prime Time, 12th January 2010. And see part 2.
He welcomes the law, and threatens our freedoms more: "I would be more delighted to see it going further and further. But it has taken the first step" [to enslaving Ireland under sharia].
Talking about Islam, he says: "We don't impose it on others", but then hypocritically says: "all that we ask others to do with it, do not degrade it, full stop." "If you say something offensive about my prophet, it's something that is definitely not going to be tolerated."
Ali Selim, quoted on 14 Mar 2010: "Thank you Ireland for the recent blasphemy legislation."
Is Dermot Ahern proud?

Ali Selim, Sept 2014, launches a book promoting Islam in schools.
Andrew McGrady, director of the Catholic Mater Dei Institute, launches the book, and he says it is "a brave step" for a Muslim fundamentalist to promote Islamic fundamentalism in schools.
I am not impressed.

Heroically brave Norwegian-Syrian lesbian Sara Azmeh Rasmussen travelled to Ireland and protested outside the Clonskeagh mosque in June-July 2011.
Why? Because it is the headquarters of the European Council for Fatwa and Research, which promotes the death penalty for homosexuality. 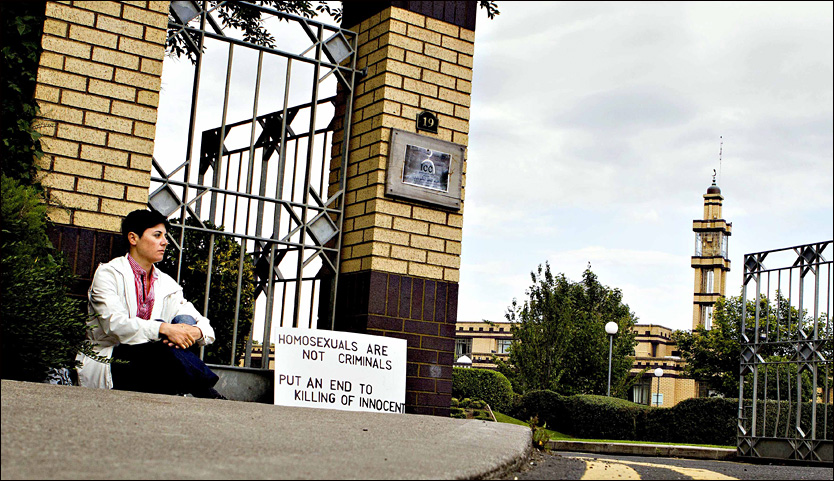 Sara Azmeh Rasmussen's protest at Clonskeagh in 2011.
From VG (Norwegian newspaper), articles of June-July 2011 (see links below).
It seems this was only covered in the Norwegian media. I did not hear about this in the Irish media at all! I heard about it through an anonymous Internet tip off from Norway. (Thanks!)

Hussein Halawa and death for gays

When Sara Azmeh Rasmussen protested above at Clonskeagh in 2011, she got to meet the head of the mosque Hussein Halawa. VG newspaper reported that he supported the death penalty for gays: 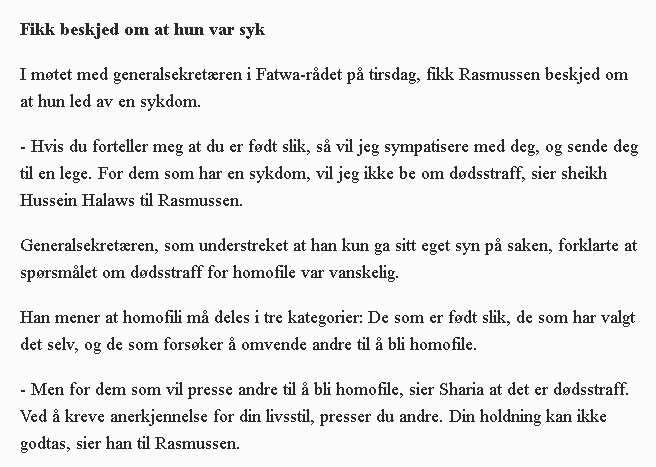 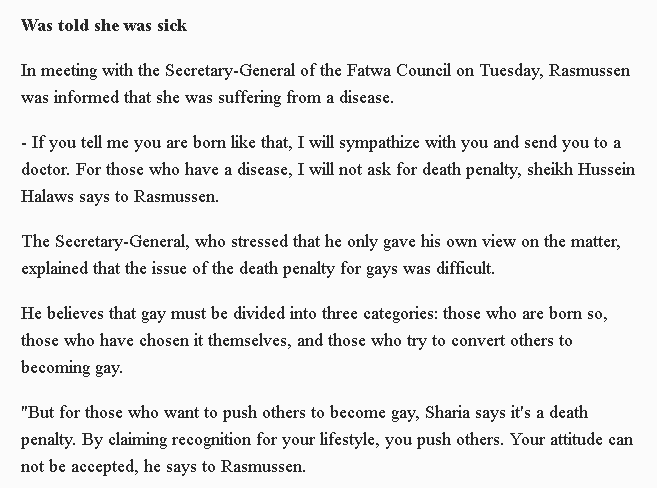 Auto-translate of the above.
"In a meeting with the Secretary-General of the Fatwa Council on Tuesday, Rasmussen was informed that she was suffering from a disease. If you tell me you are born like that, I will sympathise with you and send you to a doctor. For those who have a disease, I will not ask for the death penalty, Sheikh Hussein Halawa said to Rasmussen. The Secretary-General, who stressed that he only gave his own view on the matter, explained that the issue of the death penalty for gays was difficult. He believes that gays must be divided into three categories: those who are born so, those who have chosen it themselves, and those who try to convert others to becoming gay. "But for those who want to push others to become gay, Sharia requires the death penalty. By claiming recognition for your lifestyle, you push others. Your attitude cannot be accepted," he said to Rasmussen. 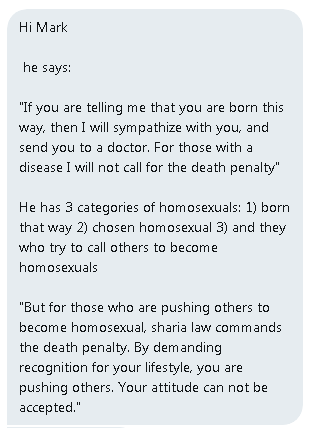 Sara Azmeh Rasmussen burns the hijab, International Womens Day, Oslo, Norway, 2009.
Cool, stirring music.
It is a wonderful thing to be free.
Why does the left not support the liberation of Muslim women and gays?

Despite being quoted in 2011 as saying gays should be killed, Hussein Halawa, head of the Clonskeagh mosque, is regularly invited to Irish state functions, and invited to deliver prayers at them. 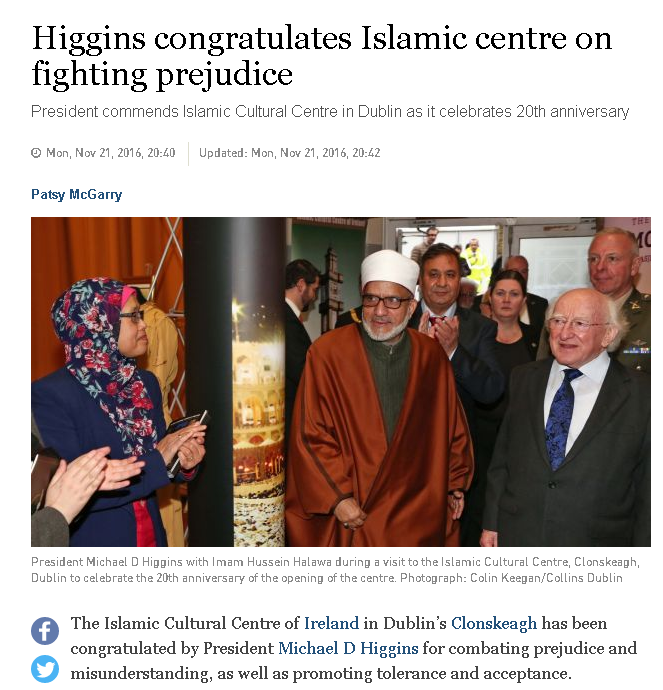 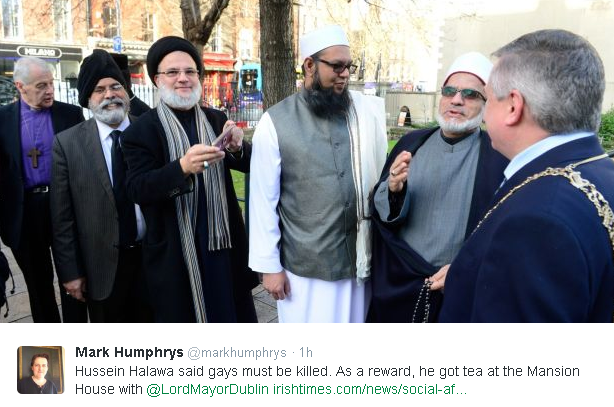 Saying gays should be killed is no barrier to getting invited to meet the Lord Mayor of Dublin at an "inter faith" event in Dec 2016.
The Lord Mayor said: "I call on all to reaffirm our traditions of being an open society."
Bad luck for the gays, though. 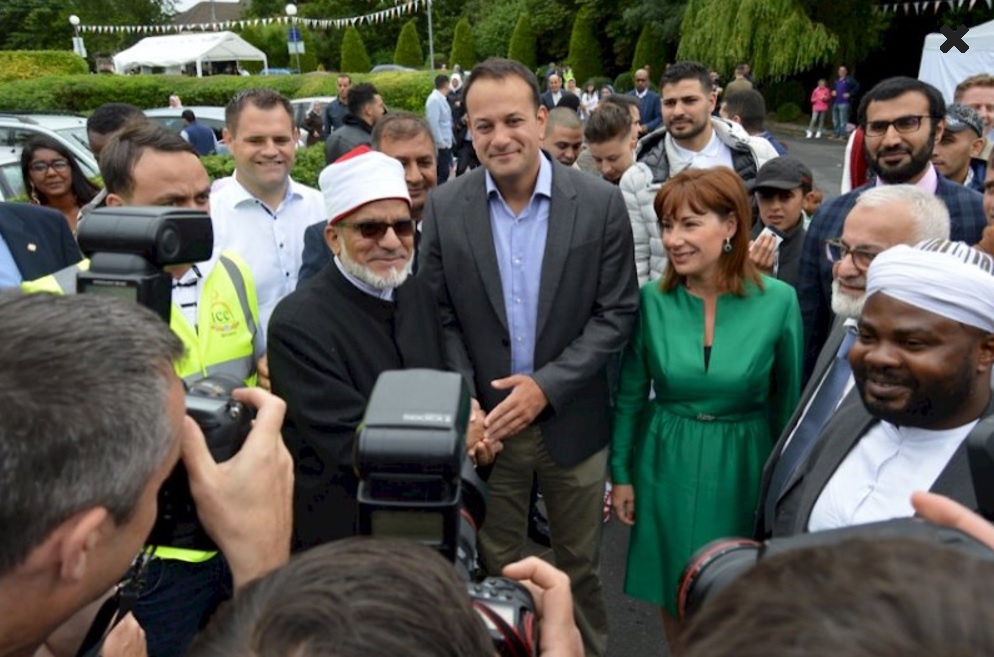 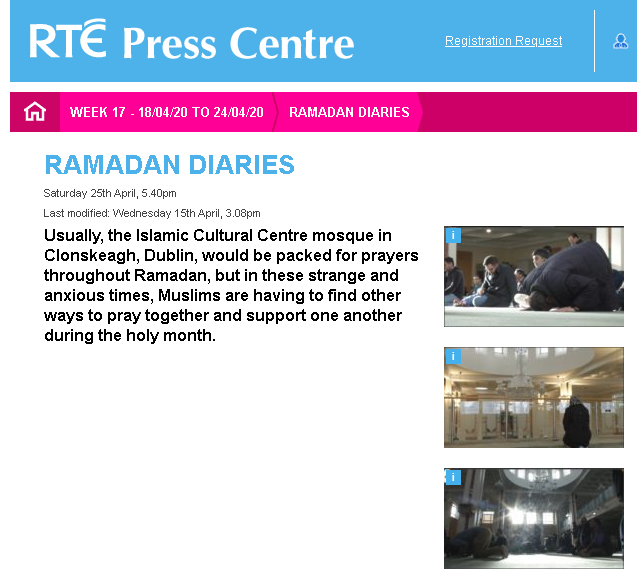 RTE promotes the Clonskeagh mosque in Ramadan Diaries, April 2020.
They wouldn't if it was a church saying gays should be killed.

After years of silence, Clonskeagh mosque decided to engage with its critics in Oct 2017. It lasted 6 days. 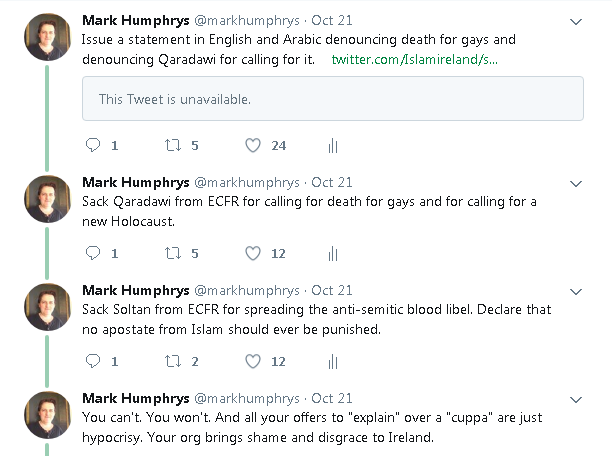 Someone at the mosque's Twitter decided to engage with their critics in Oct 2017.
I issued the challenge above. I challenged them to denounce extremism and expel extremists from the ECFR.
They made a few attempts at apologetics, and I thought we might get somewhere. But then they blocked me.

The most crazy example of this in Ireland is the treatment of the radical Halawa mosque by the Irish state and the Irish left. 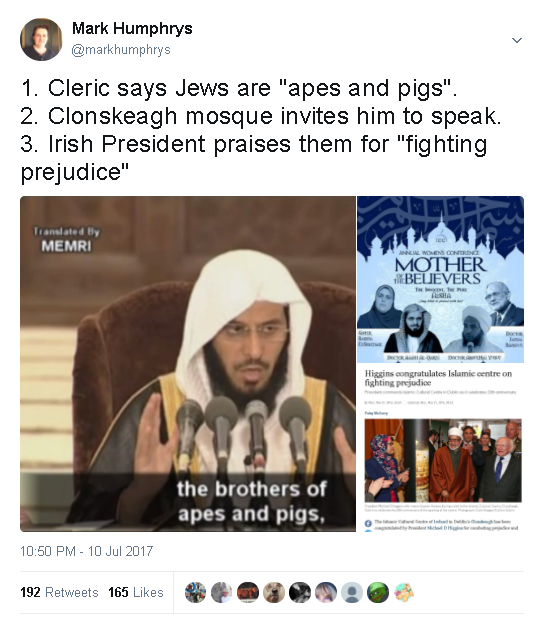 This sums up the world of the Clonskeagh mosque - and its relationship with the Irish state. 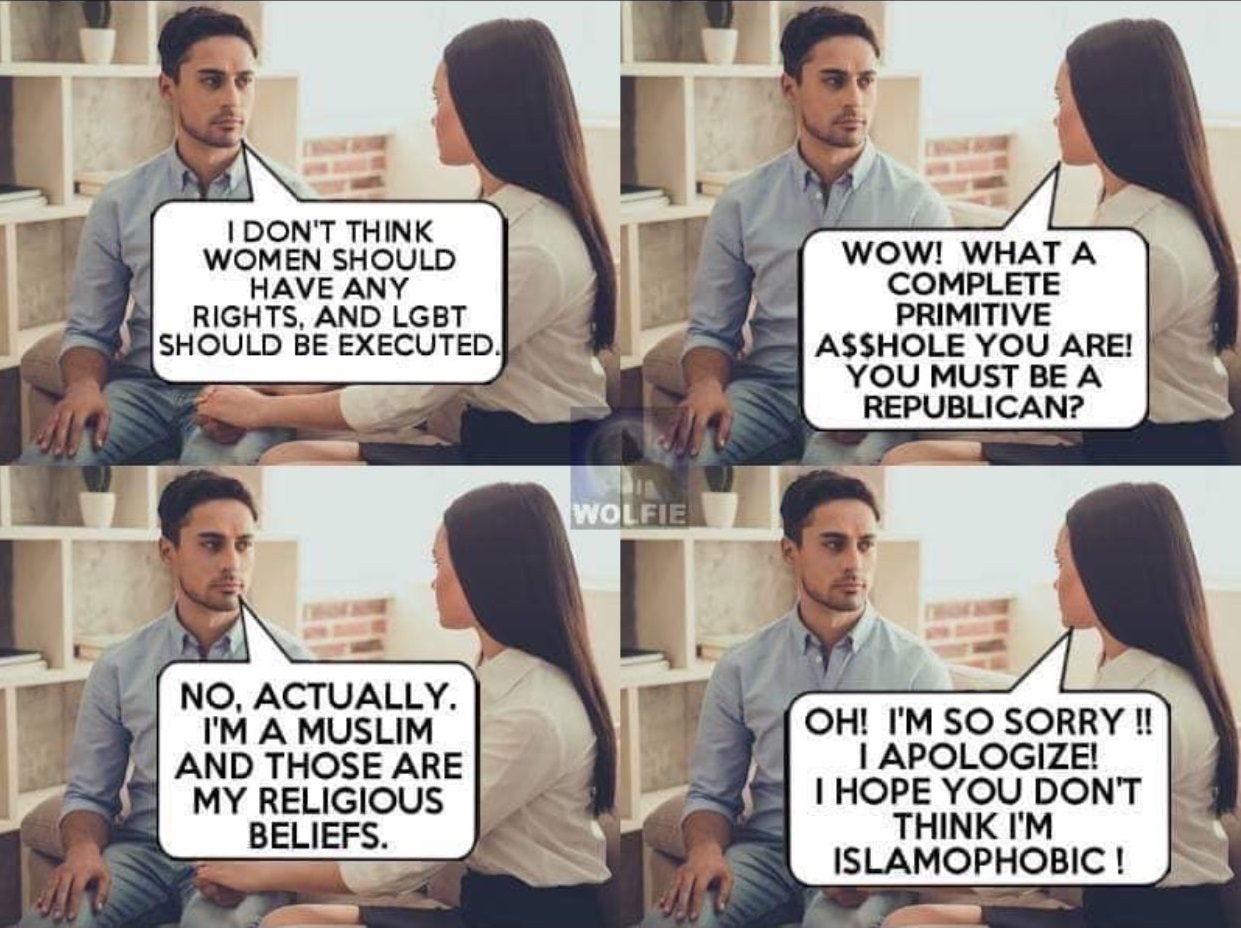 Clonskeagh mosque and its relationship with the Irish left.