Clip of Innocence of Muslims.
From "sam bacile" account.
It is not clear if a longer film actually exists. 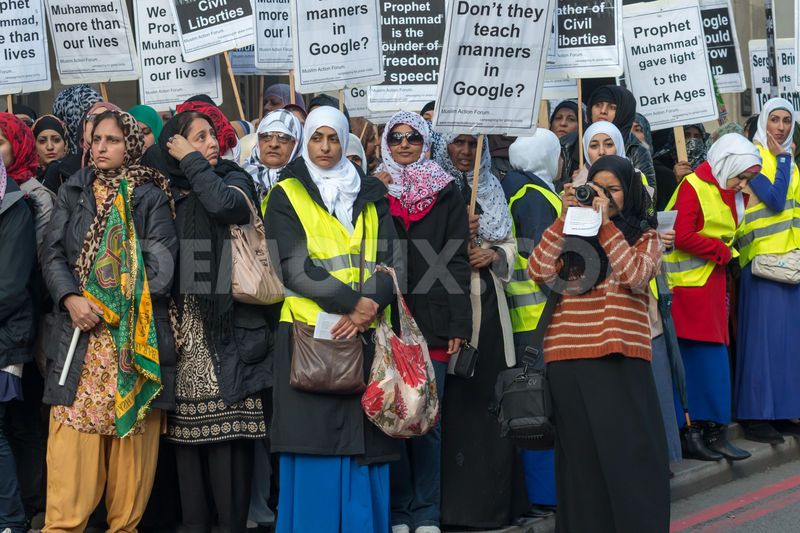 A huge protest against Google/YouTube in London, 14 Oct 2012, by Muslim fanatics who want the film banned in Britain. That is, they want Islamic sharia law applied in Britain.
Note the hilarious banner that says: "Prophet Muhammad is the founder of freedom of speech"! Yes, very funny.
Anyway, these people are opposed to freedom of speech!
And another comic claim: "Prophet Muhammad gave light to the Dark Ages", when Islam probably caused the Dark Ages.
To add to the comedy, these banners were held by the women, who were forced to hide around the corner in a separate protest to the men!
From here.

Topics covered in the film

Pious western leftists and dhimmis simply declared that the film was a libel against Mohammad. They never bothered to provide evidence of this.

President Obama declared it was "slander" against his childhood religion, Islam. But he never even addressed the topics in the film, let alone showed that the film was wrong. 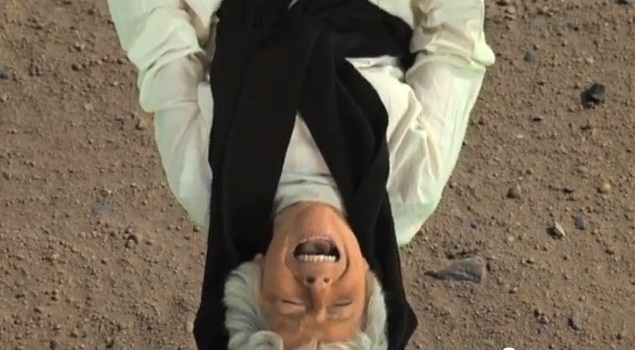 Clip from the amateurish film Innocence of Muslims (2012).
This is the scene where Umm Qirfa gets torn apart by being tied to camels.
Jump to 11m 12s. 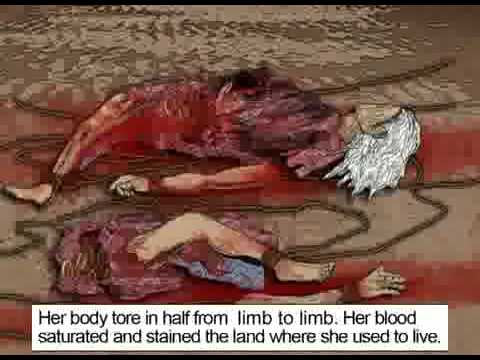 A better film about the killing of Umm Qirfa. 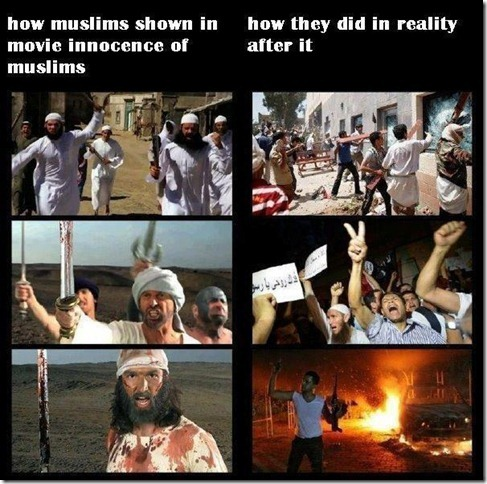 The film is obviously terribly inaccurate.
From here.

Islamic religious maniacs react the only way they know - with violence and killing. 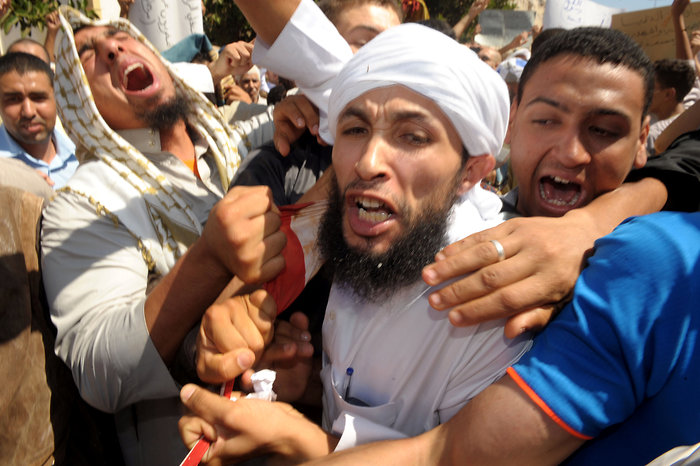 These guys in Morocco are hilarious.
Calm down, people. Wait till they find out their entire religion is not true!
Photo credit: EPA. From here.

Obama seems to agree with the mobs 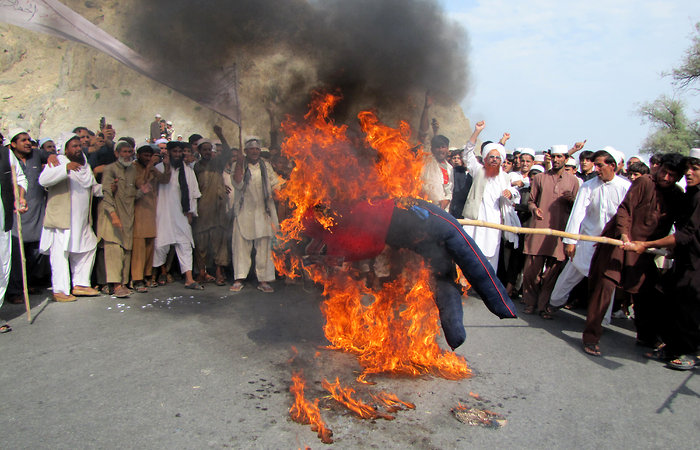 Afghan protesters burn an effigy of Obama. He's still not dhimmi enough for them.
Photo credit: EPA. From here. 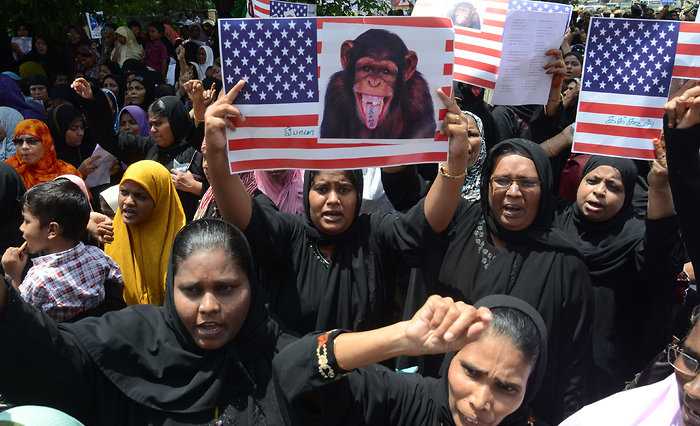 Indian Muslim protesters portray Obama as an ape. ("OBAMA" is on the chimp's tongue.)
Don't tell me third world people can be racist?
Photo credit: EPA. From here. 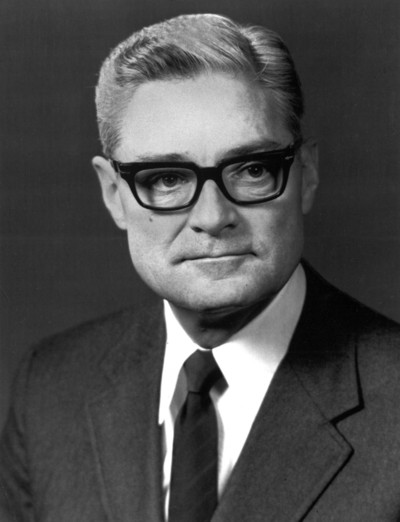 The US does not have a great track record in getting angry about the murder of its Ambassadors.
Yasser Arafat murdered the US Ambassador to Sudan in 1973.
The US soon forgave him for this. By the 1990s, no one mentioned it, and Arafat was a regular guest at the White House.
Image from here.

The film maker is arrested and imprisoned 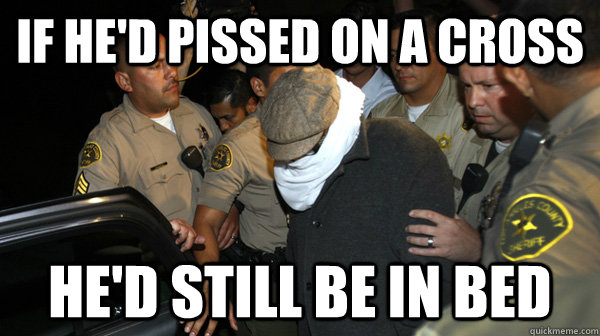 The defining photo of the Obama presidency?
The maker of Innocence of Muslims is taken away at night to discuss parole violations.
See many other captions. 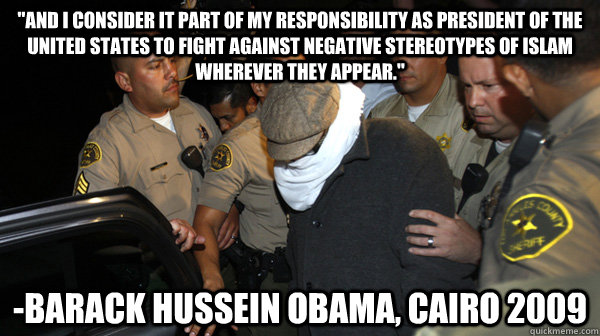 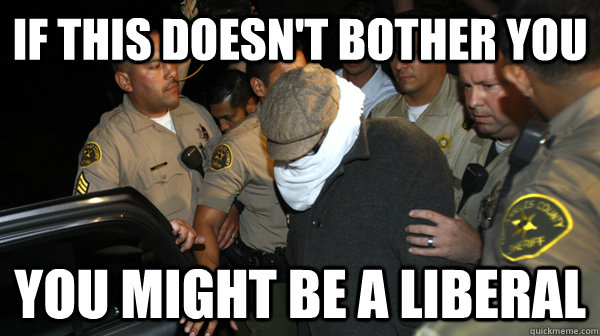 (In America, a "liberal" means a left-winger.)

I expected western dhimmis to attack the film and call for censorship. And that is what happened.

The Guardian attacks the film

The Guardian, the most pro-jihad newspaper in the English-speaking world, came out against the film. What a surprise.

The Guardian publishes Hamas, but condemns this film!

Christians are offended by blasphemy against Islam 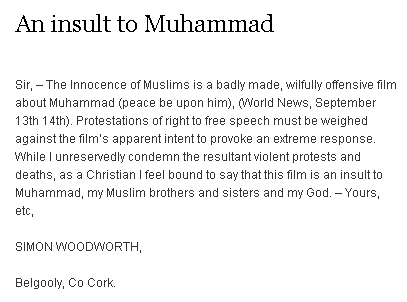 A well-meaning, pee-cee Christian is bizarrely offended by "blasphemy" against a religion he doesn't believe in.
Letter to Irish Times, 15 Sept 2012.
He declares "peace be upon him" about a warlord whose armies forced Christians to abandon their faith.
He declares that "Allah" is his God too!

A modern Christian dhimmi who actually wants sharia law!
An American "Christian" on YouTube says he wants the Muslims to kill a Christian for blasphemy against Islam.
You can't get more dhimmi than that.
From here. On this video. 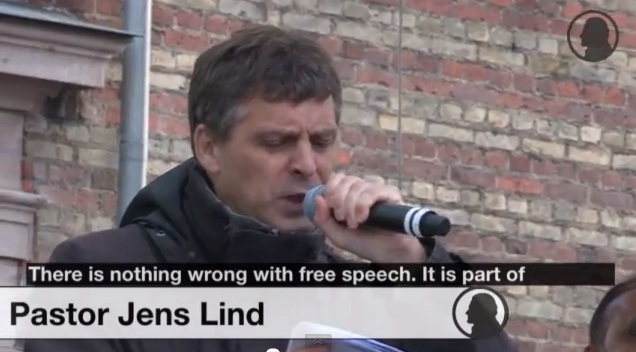 Christian pastor Jens Lind marches with Muslim fanatics against free speech in Denmark, 7 Oct 2012.
A Christian offended by blasphemy against Islam, and calling for Islamic law to be enacted.

Christianity understood Islam better in the past

"We’re going to have that person arrested and prosecuted that did the video."
- US Secretary of State Hillary Clinton allegedly said this on 14 Sept 2012 to Charles Woods, father of Tyrone Woods who was killed in Benghazi. According to Charles Woods.