Many Muslims (smart ones) come to the West to escape from sharia law. Others (idiots) decide that it would be a great idea to bring sharia to the West.

Across the West, various pre-Enlightenment and anti-Enlightenment Muslims are promoting religious sharia law. And many westerners are too weak to stand up for the Enlightenment secular state. This pattern has repeated in the UK and now in Ireland. Opinion polls show that a large minority (not majority) of Irish Muslims want Islamic sharia law in Ireland. And Ireland seems to be pandering to their demands instead of opposing them.

In 2009, the Fianna Fail government suddenly decided that the "blasphemy" provision in the 1937 Constitution protected all religions, including of course Islam. This was completely contrary to the intent of the Constitution, but Fianna Fail did not care. They introduced a law to make it an offence to blaspheme against Islam, thus making Ireland a laughing stock, and encouraging Islamic fundamentalists here and everywhere.

In 2018, the Fine Gael led government began to put this right by getting an amendment passed to remove the blasphemy provision of the Constitution. Now the 2009 law needs to be repealed. And we must guard against new "hate speech" laws introducing sharia via another means, as has already happened in Austria, where secular language is used to make it illegal to blaspheme against the prophet Muhammad. This must never come to Ireland.

The 1937 Constitution bans "blasphemy" (of course they mean against Christianity).
In 2009 the Fianna Fail Minister for Justice Dermot Ahern interpreted this as applying to all religions, including Islam.
The Defamation Act 2009 may be the craziest Act ever passed by the Dail.
The idea that any of the people who voted for the 1937 Constitution wanted to ban blasphemy against Islam is just insane. 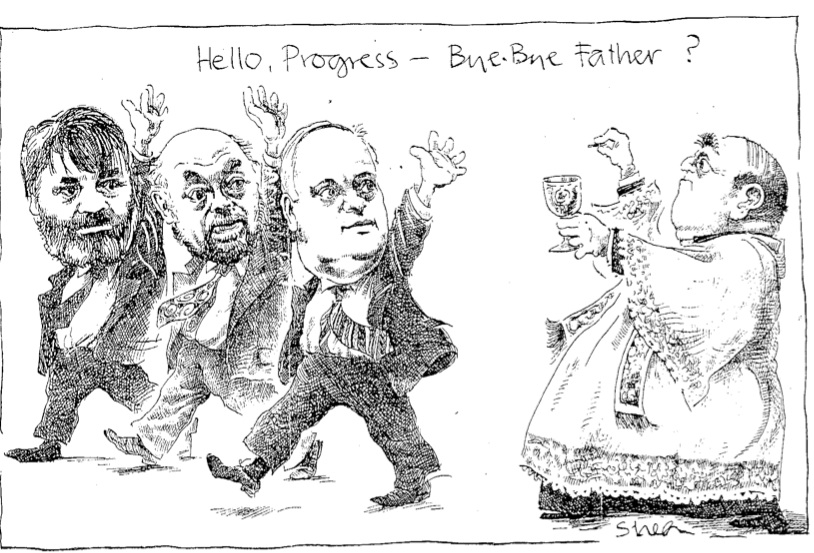 The cartoon that was the subject of the only attempt since 1937 to mount a prosecution for blasphemy.
After the 1995 divorce referendum, the Sunday Independent published this cartoon on 26 Nov 1995, suggesting the government was moving beyond the church. The tag-line is a play on the anti-divorce slogan "Hello divorce - bye bye daddy".
In 1999 a case against this cartoon came to court but was unsuccessful.
Scan from here.

If the above cartoon is thought blasphemous, how about this scene from Four Weddings and a Funeral?
Or the many Eucharist Desecration and Bible Burning videos on YouTube?

Éamon de Valera would be abolutely horrified at his Constitution being used by Dermot Ahern to ban blasphemy against Islam. He would regard Ahern as being in the grip of some kind of madness.

Past religious oppression in Irish law 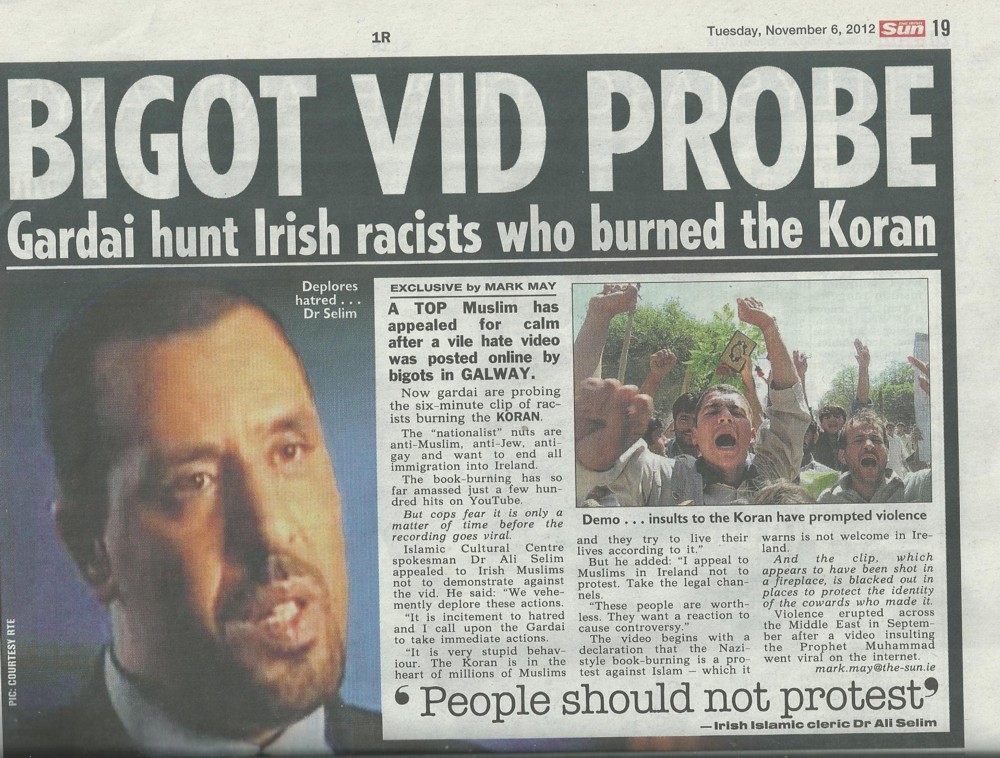 Someone in Ireland burns the Koran, and posts the video to YouTube here in Oct 2012.
The Sun claims he is a neo-Nazi, but that is not clear from the video, and may be confusion with someone else.
I've no interest in this person, but I am struck by the fact that the Gardai are investigating this.
Burning the Koran is illegal? Is burning the Bible illegal also? Is there a list of books that cannot be burnt?
Of course The Sun fails to tell us that Ali Selim believes in sharia law.

The Constitutional Convention was established in 2012 to consider various aspects of constitutional reform, including the blasphemy provision. Hopes that it would produce rational proposals were however dashed. 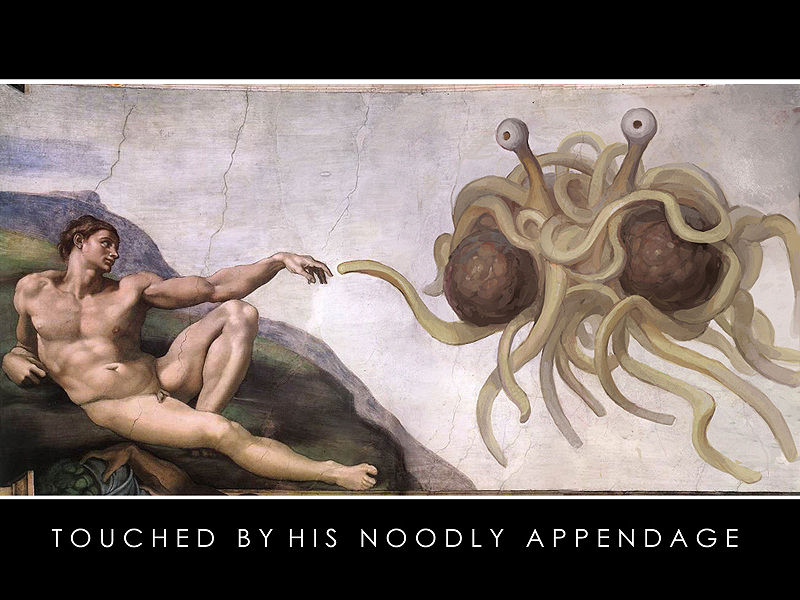 The Flying Spaghetti Monster.
Fianna Fail has made insulting him illegal.
Image from here.

Campaign to repeal the blasphemy law

Defend the right to criticise religion!
Stop Sharia law in Ireland!
The Blasphemy Challenge.
Refers to Mark 3:29.
See all responses. See Dan Dennett.
I certainly deny the existence of the Holy Spirit. 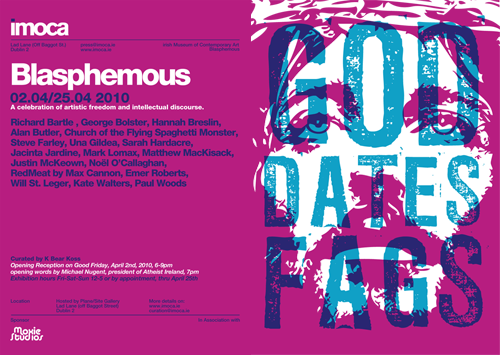 Many people in Ireland and the West want to bring in blasphemy laws under the form of "hate speech" laws.

If you believe in "hate speech" laws, please address the following.

From Ch.5 of the 1649 translation of the Quran (the first English translation). 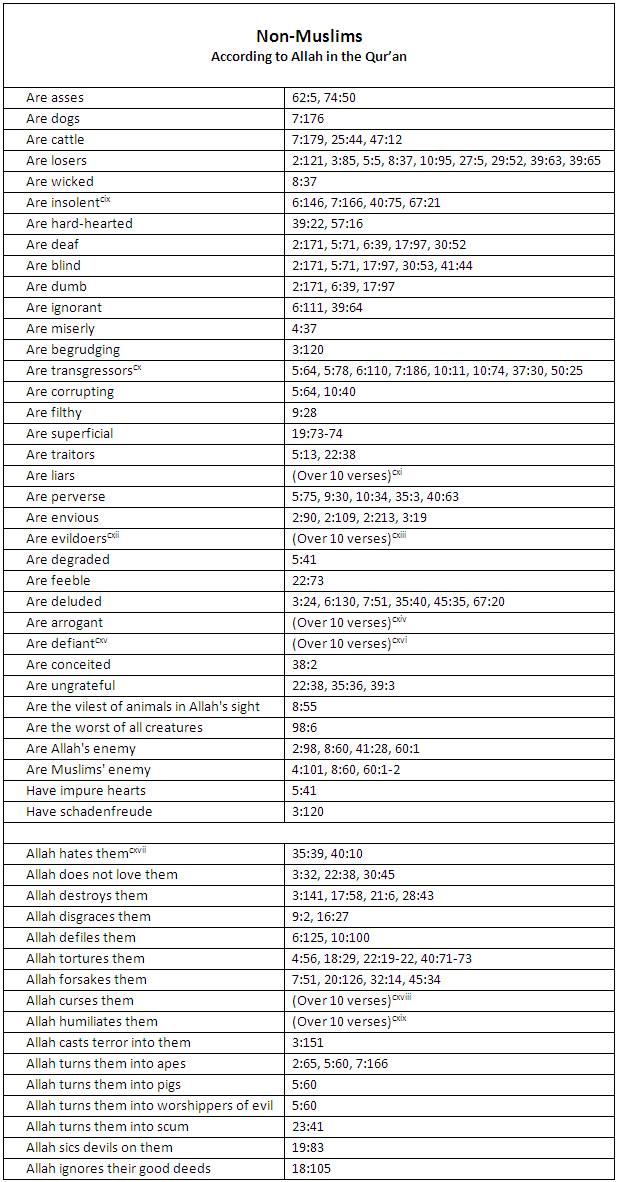 Hate speech against non-Muslims in the Quran.
If you believe in "hate speech" laws, please explain to me how they will not ban this book.
From here.