The unelected communist dictatorship of Cuba runs - like North Korea and the Soviet bloc behind the Berlin Wall - a prison state whose citizens are forbidden to leave the country. The communist dictatorship denies free speech, political opposition, and freedom of religion. It has wrecked Cuba's economy, and has killed 70,000 people so far, by executions, camps, and the deaths of refugees (boat people) trying to escape.

Communism has been a failure and it is time for Cuba to abandon it and adopt democracy, free speech, free enterprise and freedom of religion. 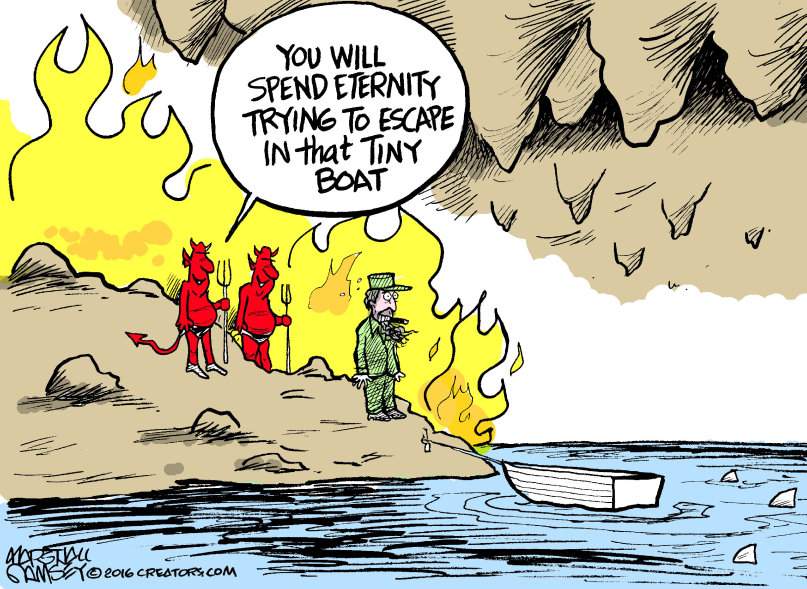 Cartoon by Marshall Ramsey at Castro's death in 2016.
From here.

From The Real Cuba. 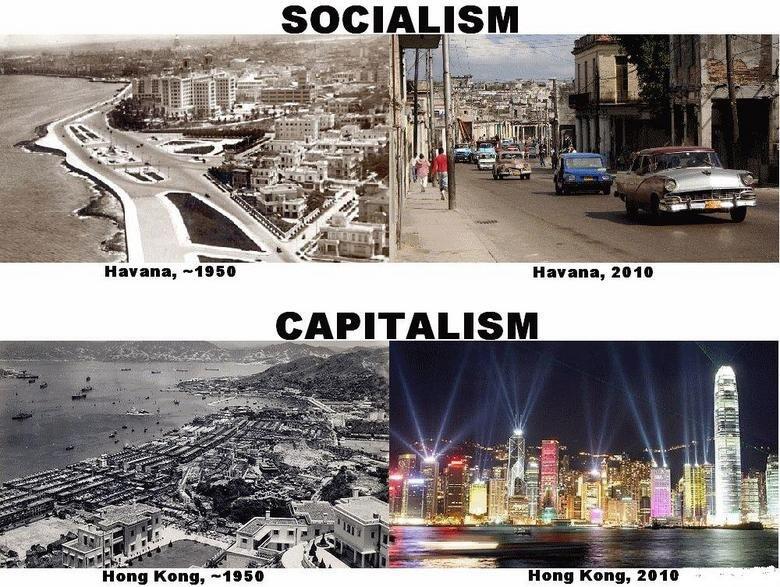 The brutal, unfree regime of Cuba threatened America and the free world with nuclear weapons in 1962.

If you don't believe my sources, at least take the time to look at the human rights groups' reports:

Cox and Forkum cartoon of 2003 on western idiots like Jimmy Carter, who are surprised when Castro executes dissidents. 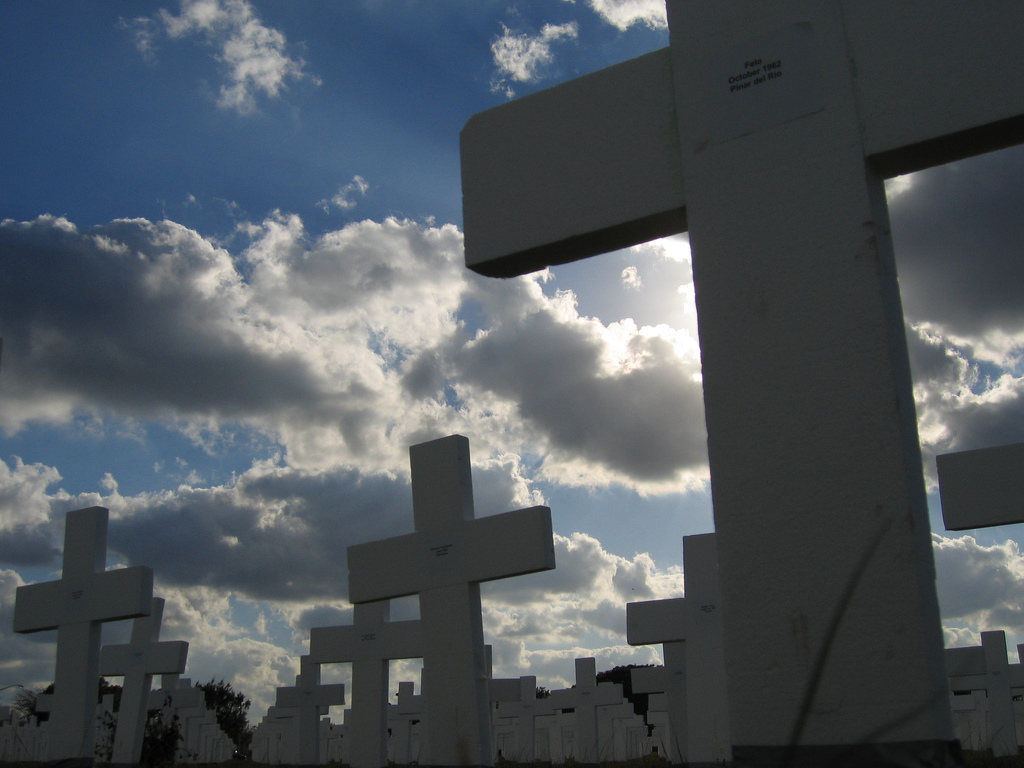 The Cuban Memorial, a temporary memorial at Tamiami Park, Miami, to the victims of the communist regime. A permanent memorial is now to be built.
Photo by Alexander Barreto 2005. See terms of use.

Even if Cuban healthcare and education was terrific, it would hardly justify crushing Cuban freedom for decades.

The Soviets had a great space program. The Nazis built great roads and automobiles. But few defend those regimes because of those things.

In any case, there is plenty of reason to be sceptical about the claim that Cuba has great healthcare and education.

His mother died in 1999 fleeing to freedom in America. In 2000 the Clinton administration sent him back to Cuba. 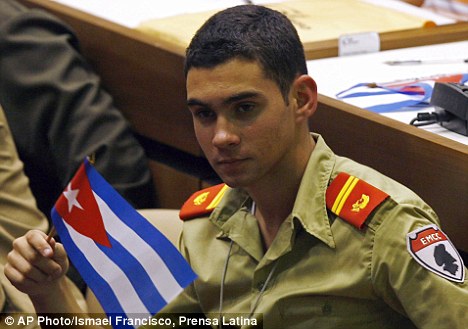 2010: Back in Cuba, the brainwashed Elian Gonzalez has become a young communist.
How sad. He has been taught to support the system that killed his mother. 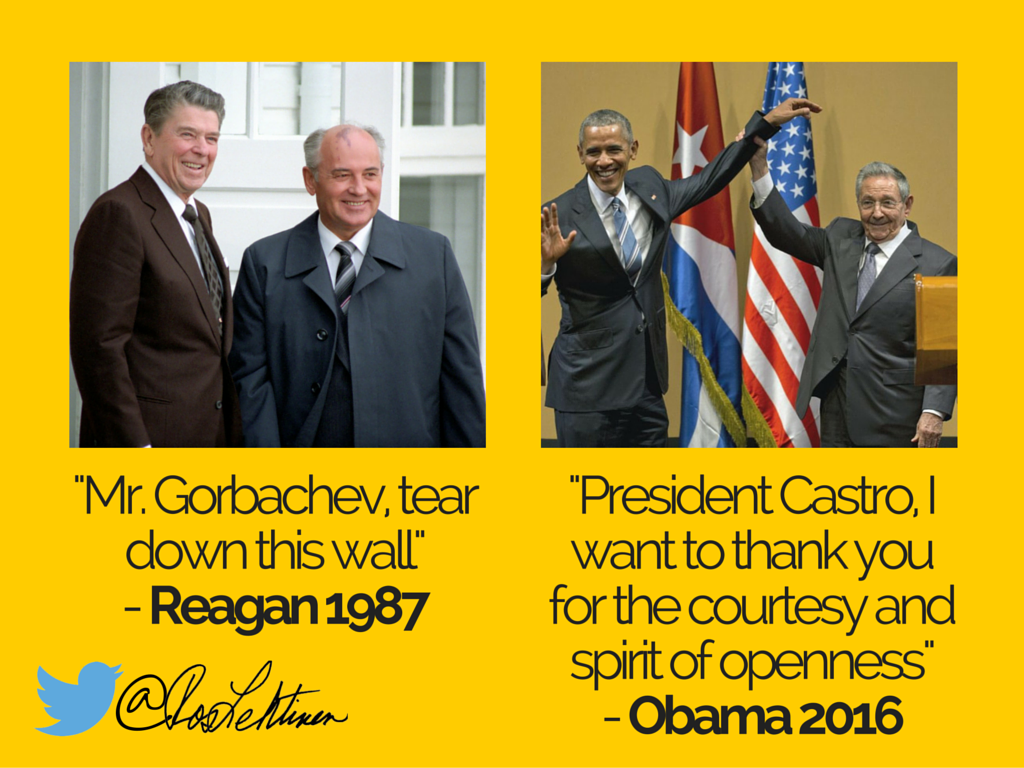 Dumbass American President visits communist Cuba, Mar 2016, and tells them they are great.
From Ileana Ros-Lehtinen. 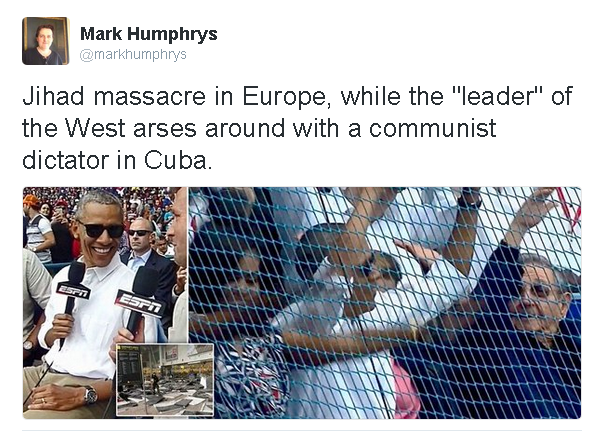 Obama arsing around with a dictator in Cuba while jihadis slaughter people in Western Europe, March 2016. 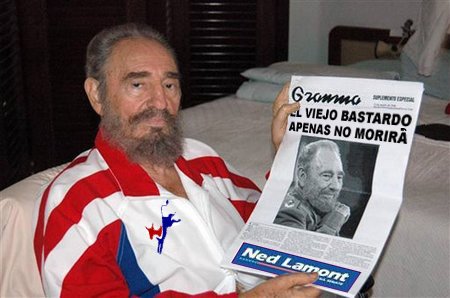 2006 parody newspaper headline: "The Old Bastard Just Will Not Die"
Photoshop by David A. Lunde of this image.
(He has also added a Ned Lamont ad and a Democratic Party logo.)

Castro, the persecutor of democrats, Christians and gays, lived a long life and died age 90. There is no justice.

There is no hope for Cuba until his revolution dies too. 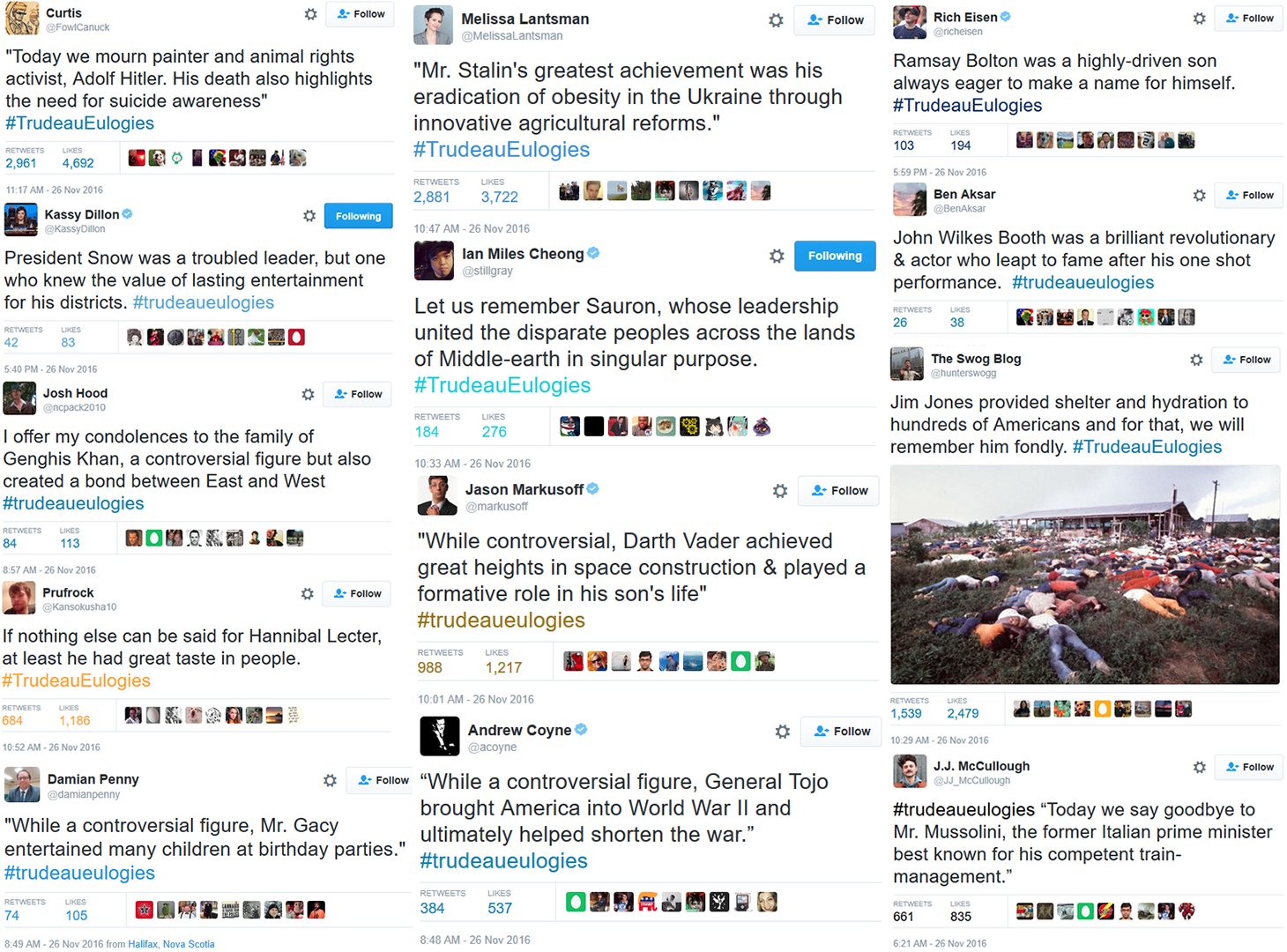 Leftist Canadian PM Justin Trudeau issued a dreadful fawning statement at the death of the dictator.
This was brilliantly mocked on Twitter under the tag: #TrudeauEulogies
See full size. 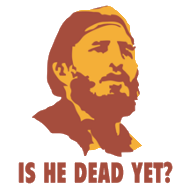 Yes he is dead now.
Now he is dead, will Cuban communism end? Will Cuba ever be free?
T-shirt from here.

If only Fidel's ashes had arrived in Santiago in 1959.

"we must follow the road of liberation even though it may cost millions of atomic war victims."
- Che Guevara, 1962.


"The trial had taken place at the height of the Cuban [missile] crisis and under the atmosphere of the threat of a third world war. Unquestionably my sympathies lay with Cuba. The rise of the first Socialist State in the western hemisphere, the revolutionary means whereby Fidel Castro had seized power, the rapid improvement in the living standards and conditions of the people within the first few years of a socialist society, Castro and his people's unequivocal opposition to colonialism and their full support for the liberation movements, had made a favourable and lasting impact throughout the world. The ability of a new and small state to defend its interests and its independence, to repulse repeated attempts by the mighty USA to destroy it, not only shows the popularity of Fidel Castro and his government, but demonstrates in no uncertain terms the superiority of socialism over capitalism."
- Communist tosser Nelson Mandela in the original manuscript of his book Long Walk to Freedom (1995).

"So long as there is a single rock in all the world's oceans without socialism, there will be boat people."
- Jean-Francois Revel sums up Cuba (and Vietnam, and North Korea, East Berlin, and all the other socialist hellholes).