Much of the Irish media is left-wing in the specific sense that I use - that they oppose the victory of western front-line states (like America, Britain and Israel) against non-western enemies.

For some of the Irish media voices below, it's open anti-Americanism. They hate America and want it to fail. They are hostile to democracies like Israel, and romanticise third world fascist revolutionaries like the Palestinians. They hate capitalism and long for socialism.

For others below, it's not so much open anti-Americanism as just general negativity - endless carping and criticism of America, Britain and Israel, the three countries that have leadership or frontier roles in the defence of western liberal civilization. These journalists believe it is the duty of a journalist to be slyly cynical and negative about everything the Western powers do.

There is some merit in this, of course, but it is not the same thing as a dispassionate search for truth. In particular, if you believe that some or many of the actions of Western countries against non-Western enemies are brave, noble and heroic, then the media's endless negativity is hard to take. For anyone who supports the victory of Western values over their Islamist and other opponents, much of leftist commentary is just tedious, pointless and demoralising to listen to. It is the criticism of people who don't seem to care, who don't seem to really want the West to win. It is the negative criticism of enemies and neutrals, who wish you ill, rather than the positive criticism of friends. 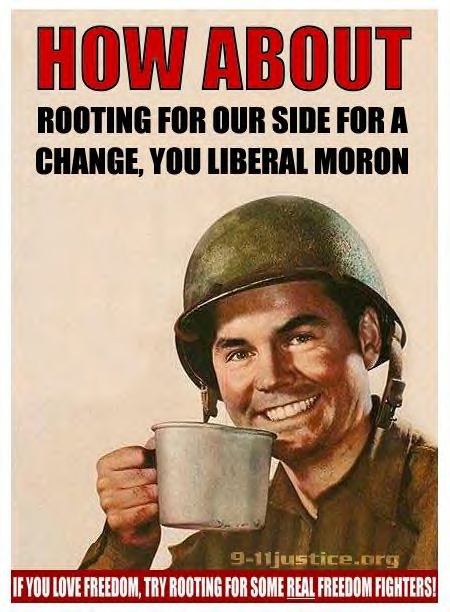 3 year old Jew Adelle Biton is paralysed by stone-throwing Palestinian racists, March 2013.
Irish journalist Colette Browne, 15 July 2013, thinks it is important to point out that the child lived in an alleged "illegal" Jewish town.
"acc to that piece" is apparently short for: "according to that piece". 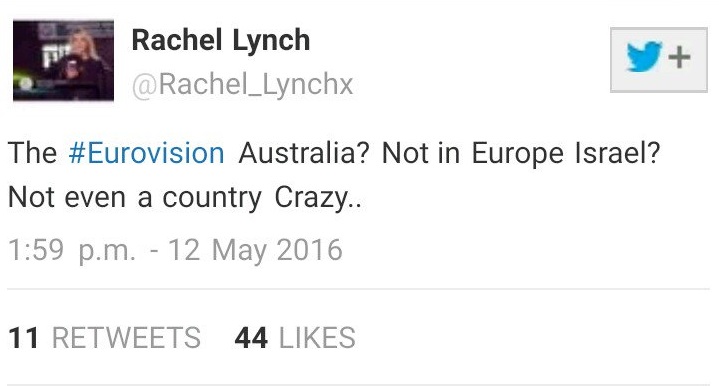 Disgusting tweet on 12 May 2016 from sports journalist Rachel Lynch.
She says Israel is: "Not even a country". Very sinister language about a country of over 8 million people.
The tweet was here but she deleted it after criticism.
I don't know why. She has left up plenty of hateful tweets about Israel, including: "Israel are scum of the earth." See screenshot and screenshot.

The music magazine Hot Press also does a line in politics. Unfortunately, they run a lot of bad politics.

Eamonn McCann is the dominant political voice at Hot Press, spreading his poison to their young readers.
He even has his own entire sub-menu under their "politics" menu.

Disgusting tweet from Hot Press writer Olaf Tyaransen at Ariel Sharon's death, 12 Jan 2014: "What a piece of human trash."
The left regularly uses such language about their political opponents in western democracies.
It is rare to hear the left use such language about actual terrorists (such as, in this case, Arafat).
How confident he is of his left-wing view of history.

Anti-American, Anti-Israeli - And I am forced to pay for it by law.

Shona Murray of Newstalk radio is horrified at Israel arresting teenage stone throwers.
Jews should just accept youths throwing rocks at them, apparently, even if some Jews get killed.

The person she re-tweets is a Holocaust denier and a jihadist supporter of killing all Israelis. 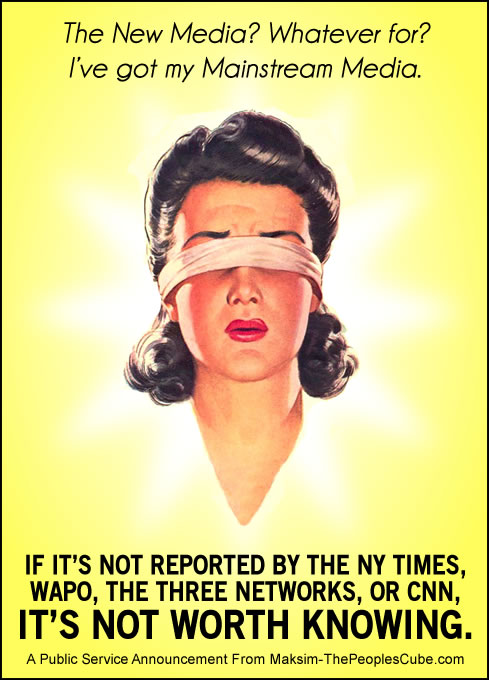 From here.
Obviously you have to be sceptical of the world the Internet has opened up for us - a world of blogs, foreign media, foreign organisations, direct access to press statements, original documents and other raw material. Otherwise you will start believing 9/11 truthers and Iranian TV.
But the educated Irish reader should not simply accept what RTE and the Irish Times tell him. He should augment it with background reading online.
One of the great wonders of the Internet age is the emergence of sites attacking the media for bias and omission. The media can be incredibly annoying, even more annoying than politicians. And if you want relief for your anger and annoyance at the media, you really have to go online.

Are RTE and the BBC centre-left? 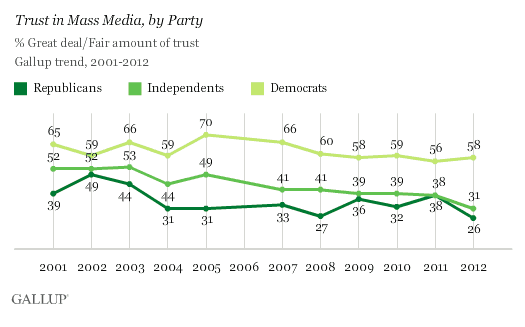 Definition of the left: The left are the people who believe what they read in the papers and see on TV.
US surveys show how Democrats believe in the media, while Republicans and Independents don't.
From Gallup.
Interesting how the media were broadly trusted on all sides just after 9/11.
But the Bush-hatred years and the Obama-worship years have shown Republicans and Independents that much of the media is not to be trusted to tell the whole truth.

The poverty of Irish media

A snapshot of how Michael D. Higgins got an easy ride and won the election:
Karlin Lillington and Ian Dempsey and Graham Linehan and Rubber Bandits and Adrian Weckler and Des Bishop and Glen Hansard react to Michael D.'s alleged "victory" in the debate on Israel against Michael Graham.
I couldn't find any Irish media or entertainment figures on Michael Graham's side.

I must admit I don't read left-wing Irish blogs much. Why bother when you get the same analysis on RTE and in the Irish Times? Whereas the right-wing Irish blogs offer something different to the mainstream discourse.

I've stripped down this list a bit, since I realised that for many of these sites, years would go by without me ever looking at them. 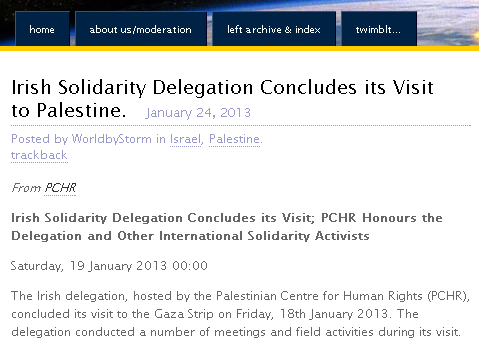 Mere days after complaining that I called them anti-Israel, the CLR put up this post, 24 Jan 2013!
See NGO Monitor on the PCHR.

On sites like politics.ie, lefties may be forced to encounter dissenting opinion from horrid right-wingers.

So Political World provides a useful function, as a "safe space" where lefties are safe from hearing any right-wing thought. 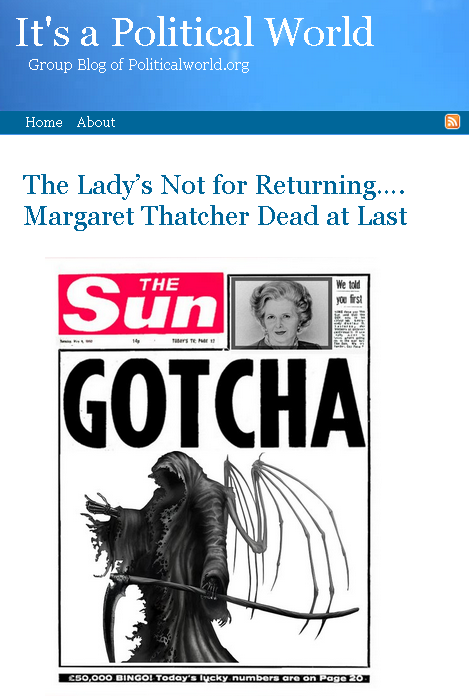 I notice that "fluffybiscuits" of Political World, who wants me sacked or disciplined for speech, had the above morally-depraved response to the Woolwich jihad attack in May 2013: "Could the attack on the soldier tonight be seen as an expression of fight back against imperialism and invading forces?"

The "Media Bite" site is interesting because it shows the view of the Irish media from the intelligent but extreme left.

Now there's gratitude for you!
450,000 Britons died to protect Ireland from Nazi Germany.
And Irish leftie David Manning of Media Bite just sneers at them, 9 Nov 2011.

"The mentality of the English left-wing intelligentsia can be studied in half a dozen weekly and monthly papers. The immediately striking thing about all these papers is their generally negative, querulous attitude, their complete lack at all times of any constructive suggestion. There is little in them except the irresponsible carping of people who have never been and never expect to be in a position of power."
- George Orwell, "England Your England", 1941, The Lion and the Unicorn (also here).
The negative, defeatist, hypercritical whining I hear on my radio, my TV, and in my newspaper is perfectly described by Orwell.
I really understand why politicians pay so little attention to negative whining critics like the above.


"Throughout history, civilizations rise and fall. They fall for the same reason ... the lack of will to defend her, a cancer which starts not from the bottom but invariably from the top. ... It has always been this way. If you feel you see it happening now, before your very eyes, well .. you are not alone. A society unwilling to enforce the laws that civilize it, that is unable or unwilling to see the advantages of civilization, a society led by the pampered, the narcissistic and the corrupt, is not long for this Earth. Our enemies look at us and see precisely these symptoms, and the symptons are worsening. ... One thing they do not see, however - also there. They do not see the Remnant. They do not see the power and resilience of what the irreplaceable Victor Davis Hanson has referred to as "the Old Breed." Nock and Isaiah believed that the purpose of the Remnant was to rebuild a new civilization from the ashes of those destroyed by their own masters. And certainly to date this has always been their main function. But there is something different -- just perhaps, something fundamentally different this time around. Because today, for the first time in human history, common people can communicate directly with one another. We are no longer dependent on spineless politicians and the jaded masters of the press to color our opinions of the world. For the first time in human history, the Remnant can reach out to each other on these gossamer threads of a world-wide web. I believe - utterly - that this ability for the common person to communicate with other common people, this internet, will allow us to end-run the cycle of civilization. I believe it in my bones. My friends, Western Civilization is not on its last legs. Western Civilization is going to the stars. Count on it."
- Bill Whittle, May 21, 2007.
The fantastic thing about the modern world is that we are no longer dependent on the media.
For example, when, in any previous war, could one read, whenever one liked, positive, morale-boosting, optimistic propaganda by those who wished the troops well? (I do not use "propaganda" here as a negative word, but rather to describe writing that is open and honest about being subjective and partisan.) One could never read such happy propaganda easily in Vietnam, the Cold War, or even WW2 or any previous war, except dull state propaganda written by the civil service. But now one can everywhere read optimistic, pro-troops propaganda written by private individuals for free as a labour of love. This is something new, that the Internet has enabled, and that old media had suppressed.