Frank McDonald is an Irish Times journalist who was for a long time the Environment Editor. Some of his work on other topics is perfectly reasonable.

But unfortunately he has a sideline in vicious hatred of Israel.

Frank McDonald, 1 Nov 2015, weeps for a dead jihadi terrorist who attacked IDF soldiers and wouldn't stop.
It is "brutality" and "murder", apparently, to shoot jihadi terrorists who won't surrender.

Frank McDonald, 8 Nov 2015, weeps for an injured female terrorist who tried to kill an Israeli security guard.
He complains that Israeli security do not immediately rush to treat her wounds after she is shot. (Because she might be wearing explosives.)
Don't worry, Frank, she lived. 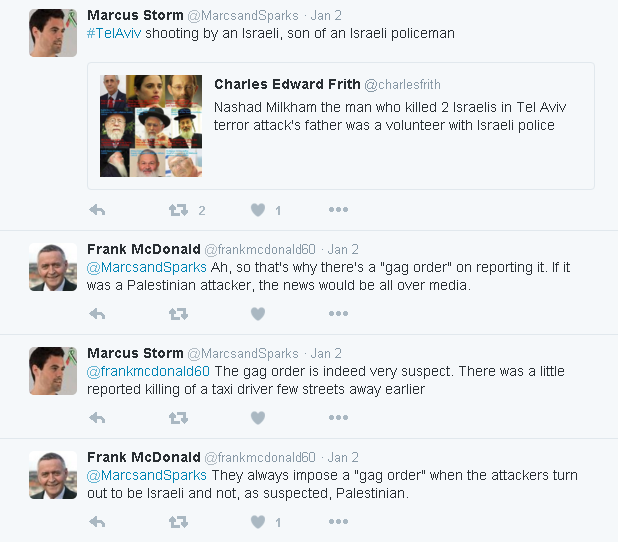 Frank McDonald, 2 Jan 2016, thinks he has worked out the secret code that indicates the Tel Aviv shooter is an Israeli Jew.
Unfortunately for him, the shooter turned out to be an Israeli Arab Muslim who was motivated by "a jihadist ideology".
Note how McDonald doesn't bat an eyelid at the appearance of notorious Holocaust denier Charles Frith in his timeline. What the hell kind of people is he hanging out with on Twitter?

I tweeted the above out to @irish4israel on 11 Jan 2014 and we started a terrific Twitter firestorm from Israel supporters.
Celebrating a Jewish prime minister's death and comparing the Holocaust to trivial things: You have to expect some kind of response.

Comparing Israelis to the Nazis

I had some debate with McDonald on Twitter before he blocked me. 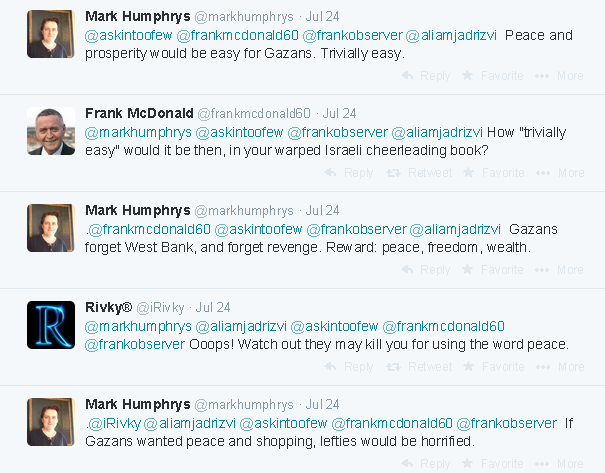 Apology - I am fooled by a troll impersonator

What makes this guy a troll, not a parody, is that he really tries to fool people, even his own "side", that he is the real McDonald. He jumps into McDonald's conversations with sneaky tactics so you think McDonald has replied.

I was embarrassed and angry to be told in July 2015 that one of my criticisms of McDonald, on my site since Aug 2014, was in fact a fraud. I was quoting the troll.

I want to apologise to McDonald for attributing the words of the troll to him. Apologies.

So above a troll got me to slander McDonald, for which I do apologise.

However, McDonald is also slandering me. He claims (based on no evidence, for there is none) that I am the troll.

He needs to apologise to me also. 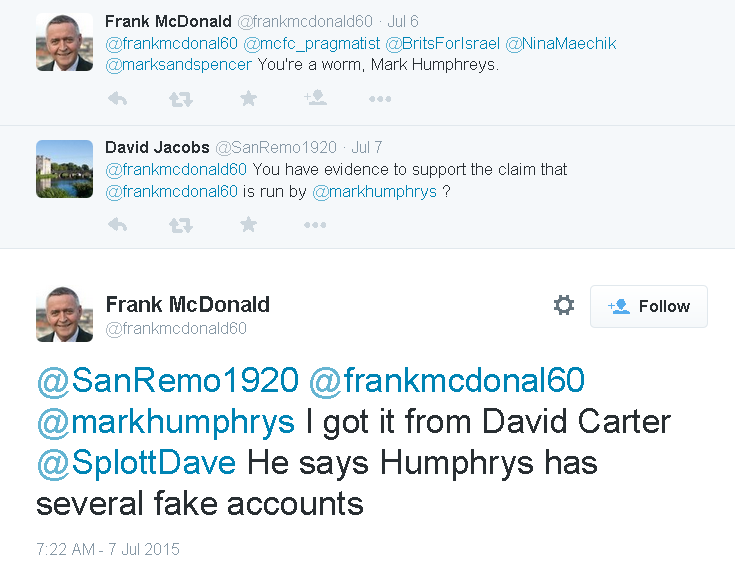 Frank McDonald lies about me, July 2015.
He claims I run the above troll account.
No evidence is presented. (None could exist.) 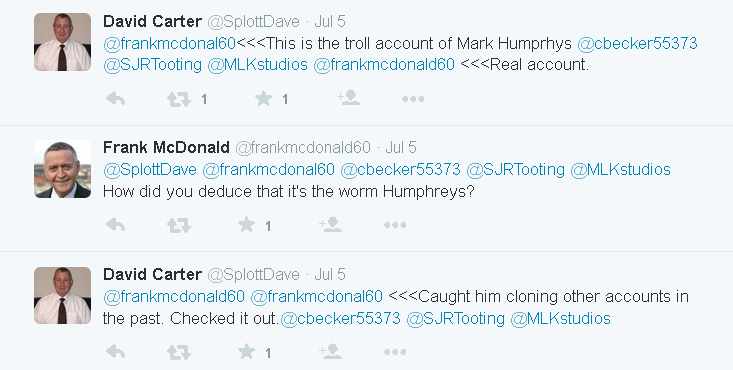 McDonald got his "information" from an Israel-hater called David Carter.
David Carter simply lies about me.
He just makes stuff up. Not a scrap of evidence is ever presented. (None could exist.)
Frank McDonald believes him and spreads the lie.

David Carter claims that I run another troll account!
He claims that I run "MLK_studios", which impersonates his friend "MLKstudios".
No evidence is presented. (None could exist.)
I have never heard of either of them.

McDonald's source is a Holocaust denier

Frank McDonald's source for his slander about me, David Carter, is a Holocaust denier. No, I'm not kidding. 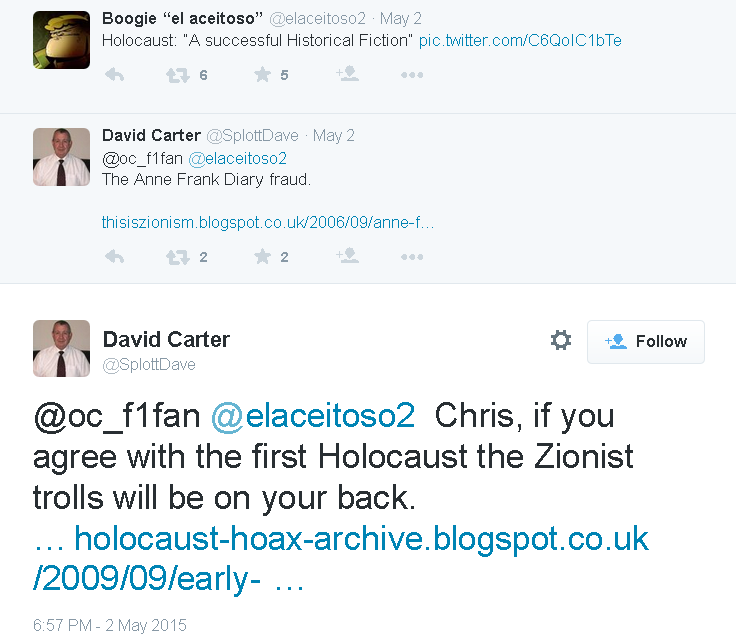 David Carter is a Holocaust denier.
This guy is the source of Frank McDonald's information about me!

He's not shy about his Holocaust denial.
Search for more.

Incredibly, David Carter is not the only Holocaust denier among Frank McDonald's friends. 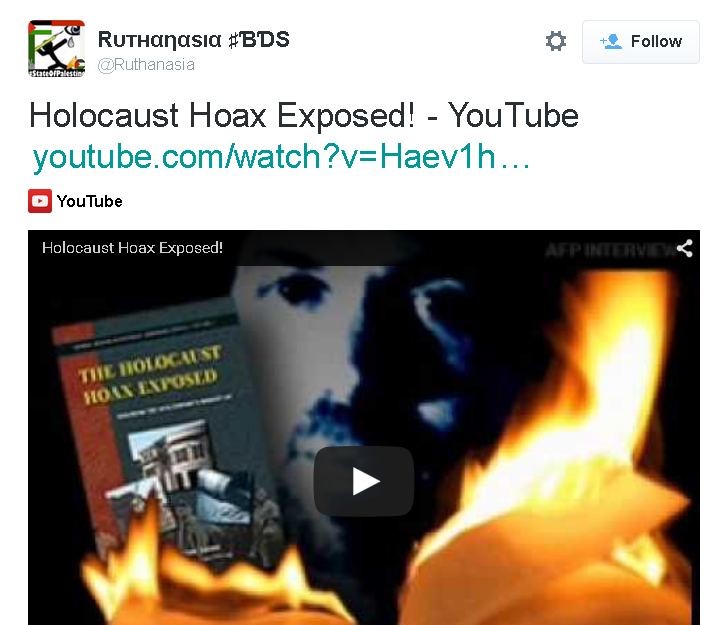 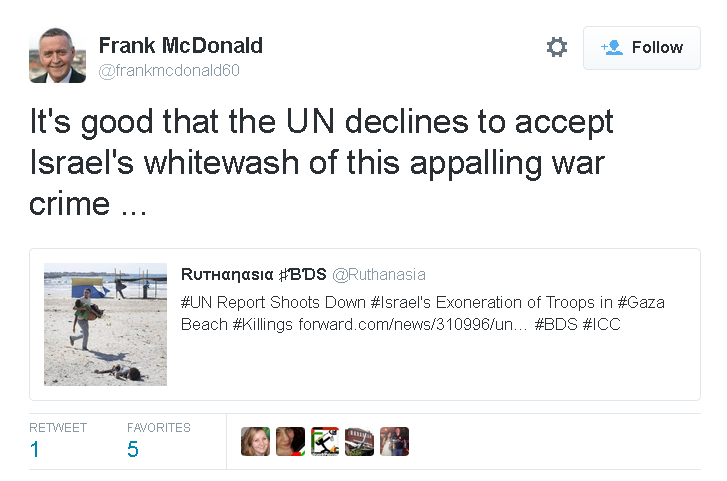 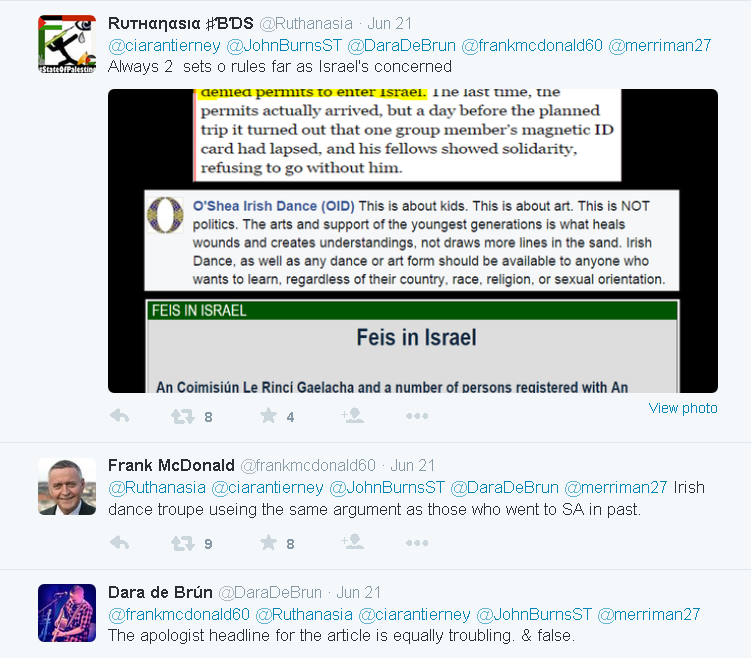 More twitter searches show they are friendly.
Above is from here.

In fact, the above are not the only Holocaust deniers among Frank McDonald's friends. There are still more. 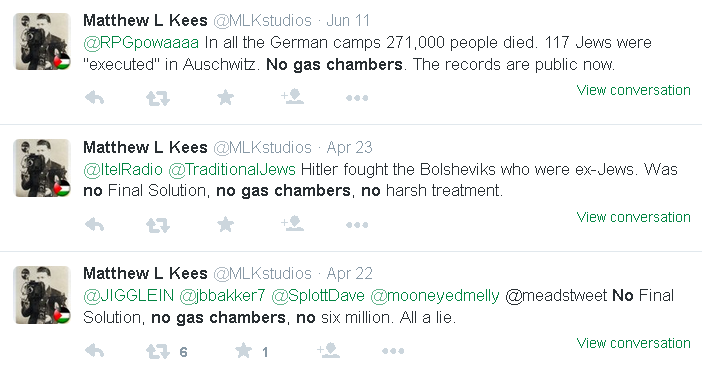 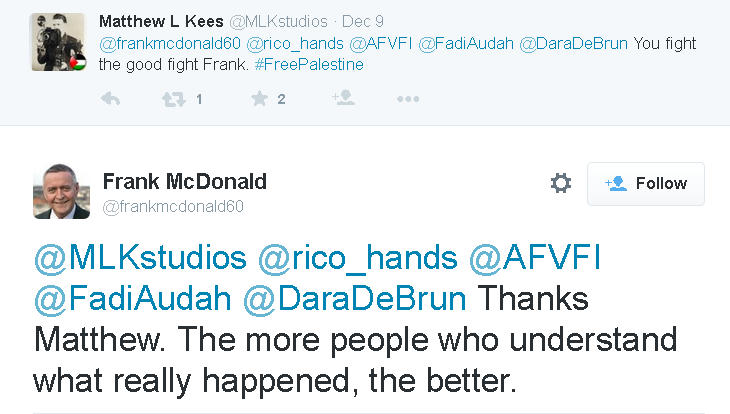 Frank McDonald, however, does hang out with such filth.
And the filth admires his work: "You fight the good fight Frank." McDonald thanks him for the praise.
So we have a 3rd Holocaust denier among McDonald's friends. 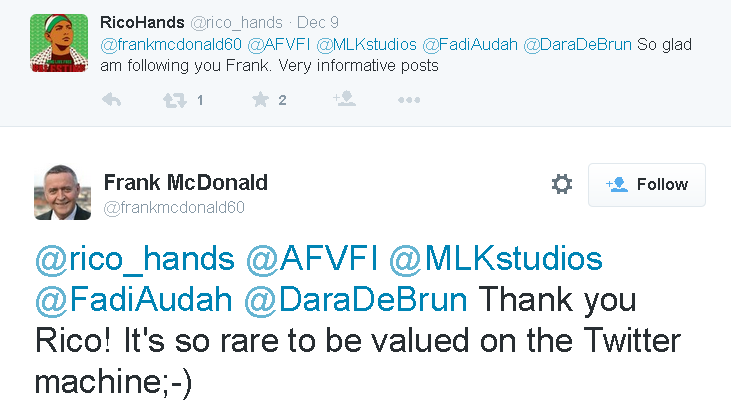 McDonald is also friends with anti-semite "ricohands".
The anti-semite admires his work: "So glad am following you Frank. Very informative posts". 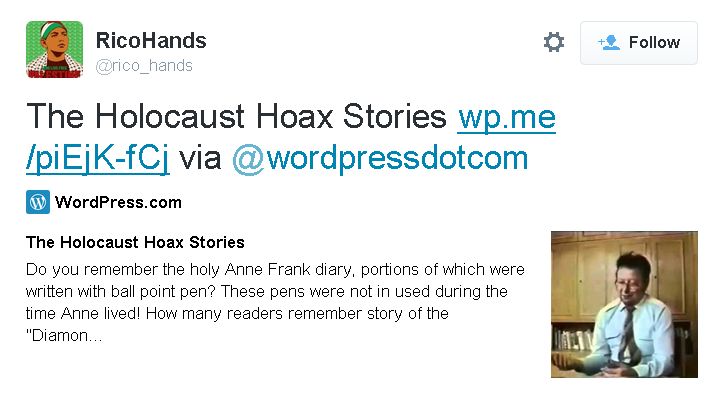 And guess what "ricohands" is?
Yes, this is a 4th Holocaust denier among McDonald's friends.
And McDonald follows him.

"ricohands" says I am Jewish "trash", May 2014: "we all know u from rag peddler fraudster stock".
Alas, I reply, I do not have that honour.
Frank McDonald follows this guy.

McDonald has had limited but friendly interaction with a 5th Holocaust denier, Charles Frith (more here).

Yes of course, McDonald may not know that Frith is a Holocaust denier.

Charles Frith is a Holocaust denier. 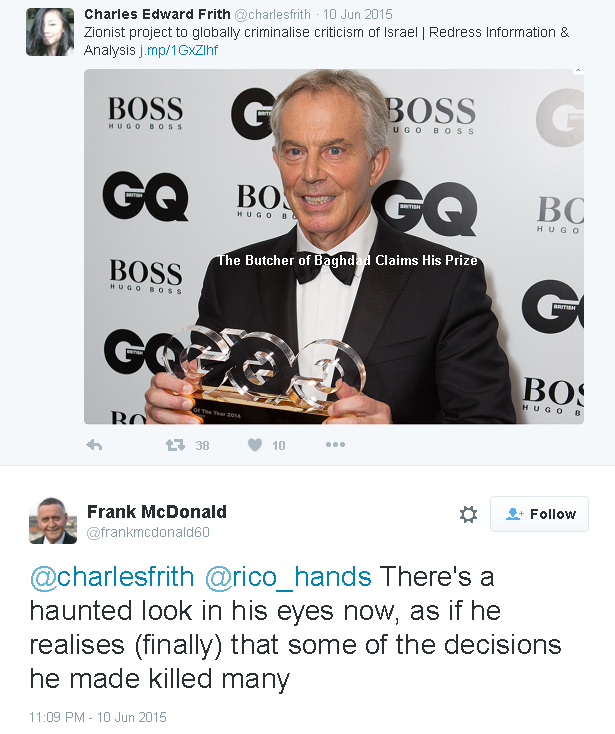 As shown above, Frank McDonald associates with a lot of disturbing people online. As a result, it is no surprise to see other things creeping in, like 9/11 conspiracy theories.

McDonald sends me abuse, 18 Aug 2015.
I think by calling me a "scumbag" he has now put everyone's minds at rest about his associations with Holocaust deniers. 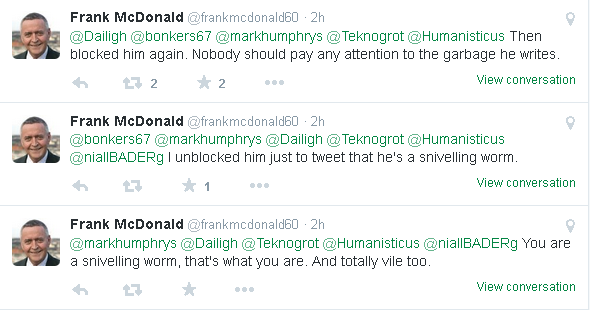 Every now and then, he hops out of block, insults me, and then blocks me again.
And this is a senior Irish journalist!