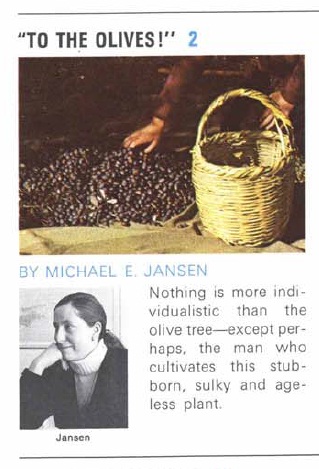 Michael Jansen in 2007.
From Palestinian Academic Society for the Study of International Affairs. 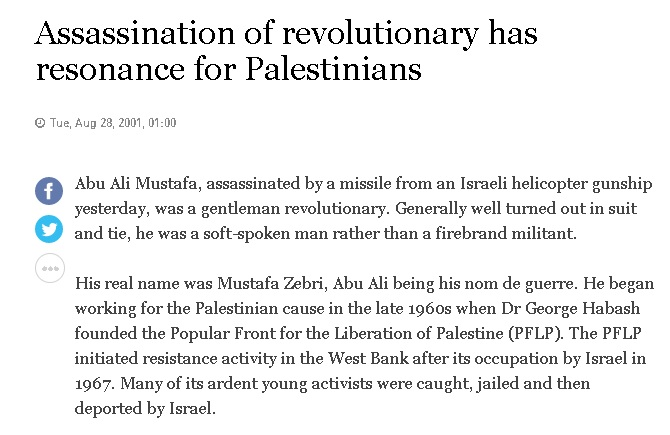 Absolutely shameful piece by Michael Jansen, Aug 28, 2001, where she describes the Jew-killing terrorist Abu Ali Mustafa as "a gentleman revolutionary".
We are supposed to appreciate the Jew-killer because he is "a soft-spoken man" and he wears a "suit and tie" while killing Jews.
Shame on the Irish Times for publishing this.

Netanyahu's magnificent speech to the U.S. Congress, May 2011.
Michael Jansen claimed this would alienate Arab democrats. But she was unable to quote any Arab democrats who were alienated.

Michael Jansen is a convert to Islam

Michael Jansen converted to Islam in 1967. The Irish Times thinks we don't need to know that.

For 25 years, the Middle East correspondent for the Irish Times was a Muslim. And they never told us.

Yes, of course, a Muslim could still have sensible opinions about the Middle East. Jansen doesn't in practice, but some Muslims do (see this list).

But that's not the point. The point is the patronising approach of the Irish Times in not telling us. They have hidden this from us for decades. It's like how they hid from us for decades that their American correspondent, Seán Cronin, was the Chief of Staff of the IRA.

Tom Carew discovered this in Nov 2010, though it took a while to confirm it. I had thought for years that Michael Jansen was just another anti-Israel leftie. I was amazed that the Irish Times never saw fit to tell us that the person attacking Israel for years in their pages was a Muslim. 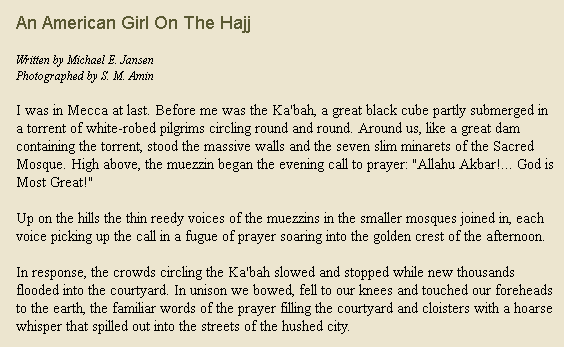 Tom Carew discovered this article in Nov 2010, but we weren't totally sure this was her.
Further research by me in Feb 2012 finally confirmed this is the Irish Times writer.
All sources agree that the following is all the same person: 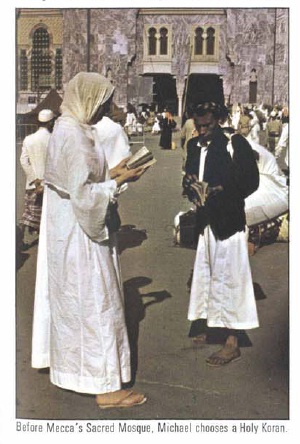 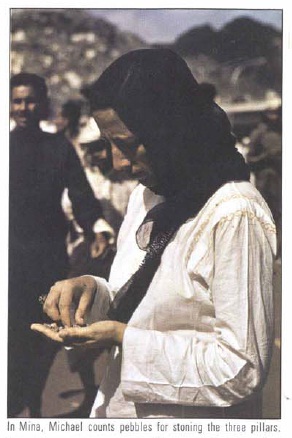 Photos from the above article.
"I formally declared my adherence to Islam."

Here are the sources that prove that the convert to Islam is the Irish Times writer.

Gives her year of graduation.

Profile at site of Embassy of Cyprus in USA. 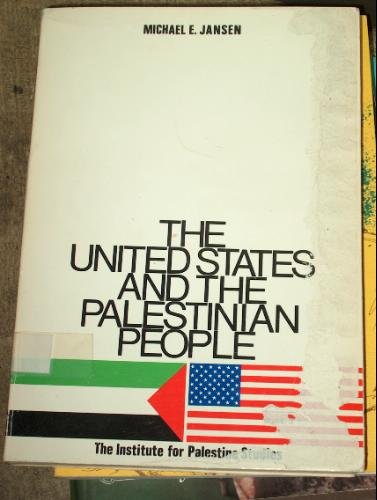 The profile above lists her as author of The United States and the Palestinian people (1970).
The cover shows her name as "Michael E. Jansen".

Profile at the anti-Israel UCC Palestine Solidarity Campaign site.
This site says: "we aim to provide as much information as possible on the background of the people whose opinions are in the database, so that readers can make up their own minds on the credibility that they wish to attach to these opinions." They tell us that Alan Shatter is Jewish. I wonder will they now tell us that Michael Jansen is Muslim? 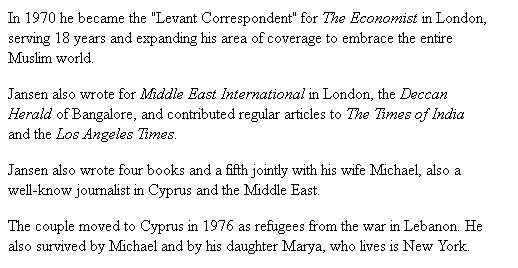 Obituary of her husband Godfrey Jansen (born 1919, died 1998).
He was an international journalist and a Muslim.
He is mentioned by her in her tribute to Edward Said, Irish Times, December 29, 2003.

Dedication of Godfrey Jansen's book Militant Islam (1979).
This confirms his wife's old name as "Michael Elin".
Note "binti" means "daughter of".
And "Hajja" is the title given to a woman who has completed the hajj.

Highly negative review of Godfrey Jansen's book Militant Islam by the great Daniel Pipes in 1980.
He points out that Godfrey Jansen really ought to declare that he is a Muslim.
To which could be added that Michael Jansen really ought to declare it too.
Pipes says the book has terrible politics: "The reformist groups who are the heroes of Militant Islam include the Muslim Brethren in Egypt, al-Maududi's Jama'at-i Islami in Pakistan, and "with reservations, the Libya of Colonel Qaddafi" ... Jansen sympathetically reviews the activities and doctrines of these groups and takes it upon himself to convince Western readers that their efforts are "laudable or at least understandable.""

A Muslim could have sensible opinions about the Middle East

Yes, of course, a Muslim could have sensible opinions about the Middle East. But Michael Jansen doesn't.
As a refreshing reminder that not all Muslims are like Michael Jansen:
The brave radicals of British Muslims for Israel.
"Israel is here to stay. It is a democracy, it is a place where people can live freely together, and it is exactly the sort of civic society and system that we should be replicating across the Middle East."
If only the Irish Times could hire Muslims like this to write for it!

As a refreshing reminder that not all Arabs hate Israel:
Israeli Arab Rania Fadel explains why she loves Israel, the country where she can be free.
If only the Irish Times could hire Arabs like this to write for it!

Arab Muslims who love Israel and serve in the Israeli army.
This clip includes the twin brother of Bedouin IDF soldier Omar Sawaid, age 27, married with two children, who was abducted by Hezbollah in 2000 and murdered.

Nonie Darwish of Arabs for Israel is an Egyptian Muslim who was raised to hate Israel.
She rebelled against this, converted to Christianity and became pro-Israel.
In contrast to Jansen, she risked her life by doing this.
What is it about the left-wing mind that makes someone like Michael Jansen more appealing to them than someone like Nonie Darwish?