Saddam's 30 year tyranny fell in 3 weeks when it came up against the U.S. military and its allies in 2003. Saddam has been captured and executed and his sons have been killed.

Given this stunning record, no "resistance" has the slightest chance of defeating the U.S. military, ending democracy, and restoring tyranny. The resistance can't win an open military fight. They can't win an election (because nobody supports them). So why do they exist?

They exist because of fantasy Islamism. Fantasy jihadi Islamism is a suicidal, messianic belief system that will fight the free countries forever (or at least until Islamism's destruction), because it is in its nature. The chances of success do not seem to matter. They do not seem to care that the vast majority of Iraqis hate the resistance and support the elections. They do not care that 90 percent of Iraqis support U.S. military attacks on the resistance. They do not care that nobody in Iraq wants the totalitarian Islamist state that they are fighting for.

The jihadis are coming to Iraq because this is where the front is in the war on the infidels. It is depressing that these people exist, but maybe this was inevitable. The war had to take place somewhere, and better here than in the streets of America. Islamism will always want to kill the infidels. It is its very nature. If not here, then somewhere else. It will never end, until Islamism is destroyed.

Showing it is everything to do with Islam, and nothing to do with "occupation" or American "crimes", the Iraqi jihad continues long after the Americans have left Iraq.
Suicide bomber blows up truck in primary school playground, Iraq, Oct 2013. 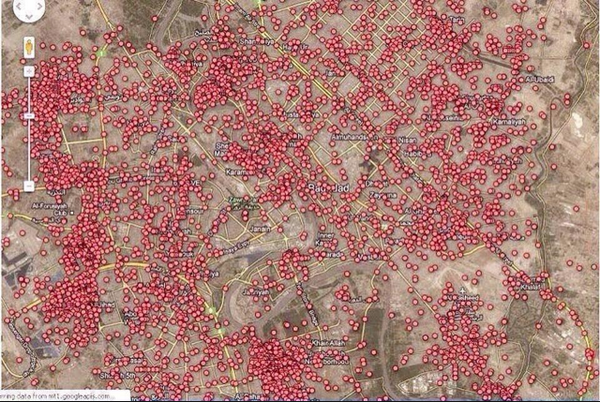 This claims to be a map of every car bomb in Baghdad 2003-2014.
From here. The source is unclear (see discussion at the above link).
But the barbarism of the Iraqi resistance is clear.

The nature of the "resistance"

The killing of Nick Berg

The killer of Nick Berg was the religious psychopath Abu Musab Al-Zarqawi. Justice came calling for him in June 2006.

The left's support for the Iraqi fascist "resistance"

After 9/11, few leftists came out openly in support of the Islamist attacks. As the War on Islamism progressed however, they became bolder. The post-war "resistance" in Iraq by Baathists and Islamists marked the real emergence of the left as open supporters of the Islamist killing.

What is the Iraqi "resistance"?

The leftists above seem confused about what the Iraqi "resistance" actually is. So let us re-cap.

This is what these people support. And no one should take anything they say seriously ever again. 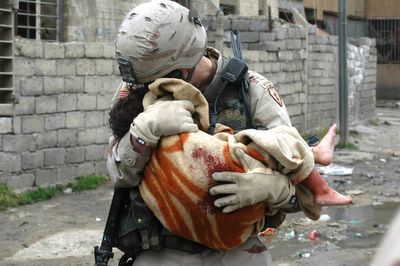 A defining image of the Iraq War.
U.S. soldier, Major Mark Bieger, tries to save a little girl killed by the Iraqi resistance, Mosul, May 2005.
Photo by Michael Yon.
See also here and here.

"60 guys from Al Qaeda kidnapped an interpreter's sister. She had a baby boy, 6 months old. They raped her, all 60 guys. Then they cut her to pieces and threw her in the river. They left the 6 month baby boy to sleep in her blood. We found him on a big farm south of Baghdad. All that was left was his legs and his shoes. The dogs ate him. ... These people are like animals who came from another planet."
- Iraqi Interpreter interviewed by Michael J. Totten, August 07, 2007.

"Marines from Golf Company said they recently fished two bodies out of the local river: a man had been decapitated, and his 4-year old tied to his leg before both were thrown into the river and the little boy drowned. The killings were a product of Al Qaeda terror."
- Andrew Lubin, Feb 2007, sums up this war of good versus evil in Iraq.

"a toddler was kidnapped in Baghdad in October 2006. The mother could not afford to pay the ransom, and so the kidnappers killed the child. They returned the body to the mother. The little child had been beheaded, roasted and was served on a mound of rice."
- What the brave mujahideen warriors of the Iraqi resistance do to Iraqi Christians. Report from the Barnabas Fund.