9/11 made me finally break with the left-liberal worldview and start agreeing with conservatives on foreign policy (I had already long ago agreed with the right on economics). I finally converted from liberal-left to libertarian-right once I read the latter's arguments in 2001-02.

Introduction - What is the right?

What does "right" mean in the modern world? Let me suggest a definition:

By "right" on this page I mean people that generally support the west against its enemies. Not all of the links on this page could be called "right-wing". (I'm not even necessarily "right-wing" myself.) But none of these are anti-west.

According to this definition, there are many right-wing groups and individuals I disagree with and oppose, such as religious conservatives. There are even self-described "right-wingers" who do not support the west against its enemies, such as isolationists and Israel-haters. For a full discussion see:

Fancy a 50 minute introduction to what the right is, and how it differs from the left?
Here is one, covering a range of topics, from the brilliant Thomas Sowell. 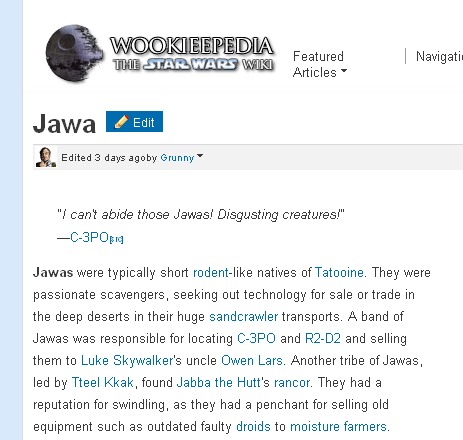 (Left) From Google. (Right) From Star Wars Wiki. Neither from the Jawa Report.
The Saudi-funded Frankie Martin knows nothing about the Jawa Report blog, so he Googles it, finds a hostile claim that it is a "weblog comparing Muslims to Jawas", and reprints this as if it is the blog's self-description!
He then Googles Jawas, finds this Star Wars Wiki, which is nothing to do with the Jawa Report, and reprints its descriptions of Jawas as "typically short rodent-like" creatures, and "disgusting", as if the Jawa Report used this language when talking about Muslims!
This apparently is "scholarship" when you are funded by Saudi Arabia.