Obama and the War - Obama and Iraq

The very first day I heard about Obama in 2007, he was opposing the Iraq War effort.

He opposed the Iraq War from the start in 2003. He opposed the 2007-08 "surge" that brought about an incredible victory. Bush ignored the advice of hostiles like Obama and instead won the war. Bush handed Obama victory when he took over, and all he had to do was keep it.

But Obama deliberately abandoned Iraq and deliberately threw away that victory for no reason. As predicted by his critics, the jihad (in the new and satanic form of ISIS) took over large parts of Iraq and began a genocide. The ISIS genocide of Christians, Yazidi and Shia is a direct consequence of the American voters electing this appeasing fool of a President in 2008 and again in 2012. He promised to throw Iraq to the wolves, and the American voters liked that and elected him, and he did throw Iraq to the wolves.

The genocidal reign of the Islamic State is Obama's legacy. And he did it all for no reason.

In 2014, I recall the first day I heard of Obama in 2007.
He was slagging Australia off about the Iraq War. (See above.)
I never believed in him. I always thought from the start that he would be a terrible President.

Obama was wrong on the surge.
See what Obama said about the surge in 2007.

Full round-up of Obama's shallow, changeable, poorly thought out, and endlessly shifting positions on Iraq.
Why did Americans want this weak, naive, inexperienced young man in charge of the war? 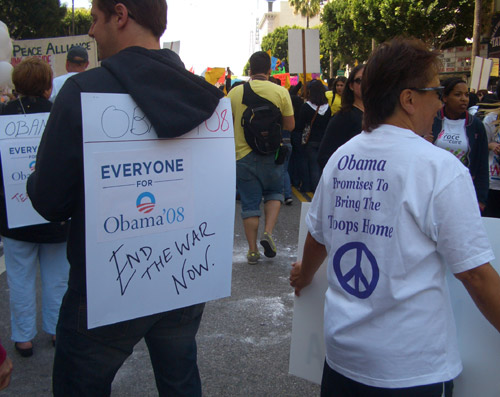 Anti-War Protest, LA, March 2008.
They believed Obama would help lose the Iraq War.
They were right.

Bush's victory in Iraq. Obama takes credit. (Then wrecks it.)

By the time Obama arrived, Bush had won the Iraq war. It seemed hard for Obama to wreck that, but he did. 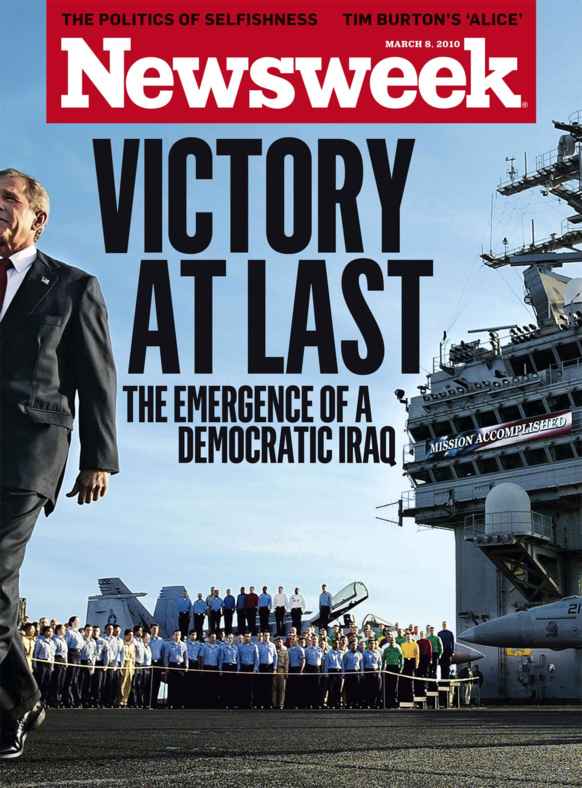 Victory has many fathers. Defeat is an orphan.
Even Newsweek (issue dated 8 Mar 2010) now thinks Iraq has been won.

Obama pissed away victory in Iraq.
But if you tell that to leftists now, like Charles Johnson here in June 2015, they deny there ever was a victory.
But that's not what their man Obama was saying in 2010.

Obama throws away victory in Iraq

And yet Obama threw it all away.

Obama's stubborn decision to leave no US bases at all in Iraq meant Iraq quickly fell back into chaos and bloodshed again.

America voted for this. 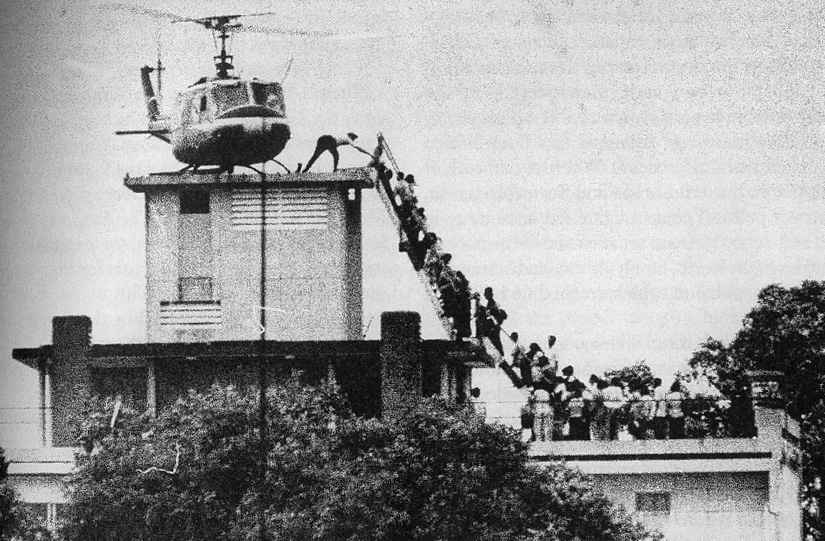 America abandoned Vietnam to the wolves in 1973. It fell to the communist darkness in 1975. Vietnam is still a communist dictatorship today.
Now Obama's America abandons Iraq to the jihadi wolves. 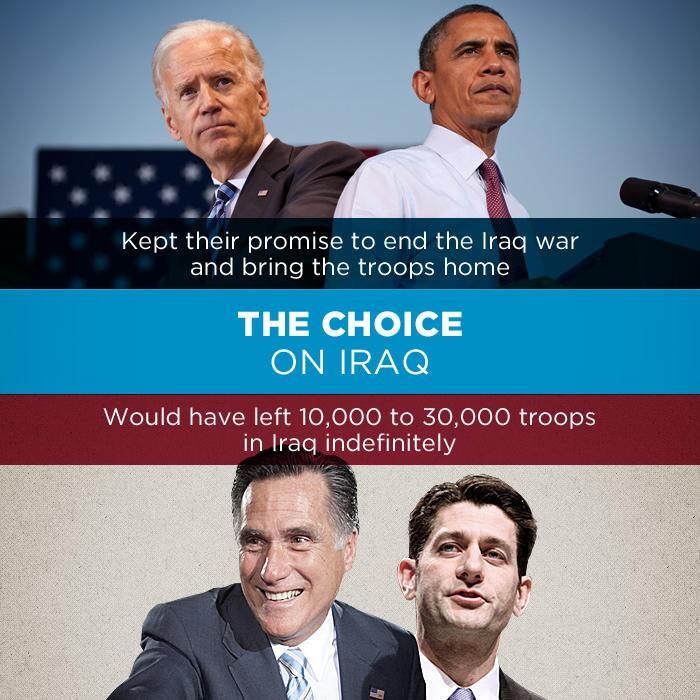 Obama election ad in 2012 celebrates throwing Iraq to the wolves, and criticises Romney for wanting to keep US bases and influence there.
It should read: "Kept their threat to lose the Iraq war". 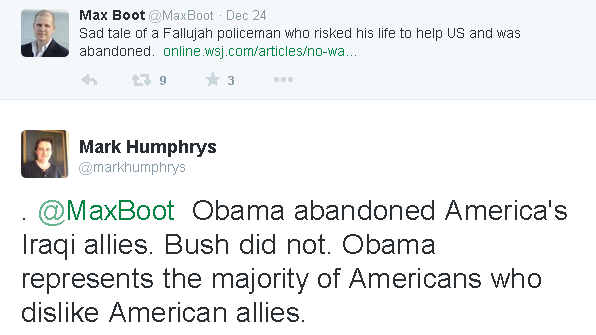 Max Boot on America abandoning its allies to death in Iraq.
The real problem is that Americans voted for this.
Obama represents the majority of Americans who dislike American allies.

A turning point: Obama orders airstrikes on ISIS to prevent genocide, Aug 2014. Glad to hear it. But this sickening disaster is the consequence of Obama abandoning Iraq and Syria to the wolves.

John Nolte here and here sums it up.
Obama made this happen.

My thoughts on #ThankObamaIn4Words as he hands over to Trump in Nov 2016.

"I am not persuaded that 20,000 additional troops in Iraq is going to solve the sectarian violence there. In fact, I think it will do the reverse"
- Barack Obama, Jan 2007, on the surge.

"this war is lost and the surge is not accomplishing anything"
- Harry Reid, leader of the Democrats in the Senate, April 19, 2007, expressing how the Democratic party basically gave up on the war.

Question to Obama, July 2008: "If you had to do it over again, knowing what you know now, would you support the surge?"
Obama: "No", followed by lots of waffling justification [click on the link to see].

"Let's look at just one example at a lifetime of principled stands that John McCain's brought about: his support for the troop surge in Iraq. The Democratic Party had given up on Iraq. And I believe, ladies and gentlemen, when they gave up on Iraq, they had given up on America. ... In the single biggest policy decision of this election, John McCain got it right, and Barack Obama got it wrong."
- Rudy Giuliani, 3 Sept 2008, on history's judgement on Obama and the Democratic party.

"Now, we know the surge has worked. Our men and women in uniform know it has worked. And I promise you, above all others, Al Qaeda knows it has worked. The only people who deny it are Barack Obama and his buddies at MoveOn.org. Why won't they admit it? Because Barack Obama's campaign is built around us losing in Iraq. ... Last summer, we came within two votes - two votes - of a congressionally mandated surrender. One Democrat, one Democrat broke with his party to support the surge. Ladies and gentlemen, thank God for Joe Lieberman. It was John McCain's voice and credibility that stopped the Democratic Congress from losing this war. Gen. Petraeus' plan will be a model for generations to come, and our troops will be heroes for the ages. Those who predicted failure, voted to cut off funding for our troops, and played politics with our national security will be footnotes in history. ... While Barack Obama expresses appreciation for our troops' service, he refuses to acknowledge their success. They have worked too hard, they have sacrificed too much for a patronizing pat on the back. ... Not once - not once was Barack Obama's eloquent voice ever raised in support of victory in Iraq. Not once was it used to rally our troops in battle. Instead, he inspired those who supported retreat and would have accepted our defeat. We should all be grateful, ladies and gentlemen, that Barack Obama was unable to defeat the surge."
- Lindsey Graham, 4 Sept 2008.

"Years of debate over Iraq and terrorism have left our unity on national security issues in tatters, and created a highly polarized and partisan backdrop for this effort."
- President Obama's hypocritical speech on his Afghan surge, 1 Dec 2009.
Um yes, wasn't it you, and people like you, that caused this lack of unity and partisan division? It was people like you who attacked Bush for 8 long years over Iraq, Afghanistan and national security. And even today, the Republicans will support your Afghan surge. It's your own party that will oppose it.

"I am very optimistic about - about Iraq. I mean, this could be one of the great achievements of this administration. You're going to see 90,000 American troops come marching home by the end of the summer. You're going to see a stable government in Iraq that is actually moving toward a representative government."
Vice-President Joe Biden, Feb 2010, tries to claim credit for Bush's success in Iraq.
Biden and Obama then threw away the hard-earned victory, and let ISIS emerge.