The Irish Times has long been a quality newspaper in Ireland, in terms of in-depth coverage. While its editorials and opinion are slanted to the left, and it spins the news to the left, it used to, under Conor Brady and Geraldine Kennedy (1986-2011), have a tradition of providing some non-left-wing voices.

Unfortunately, this tradition has recently been abandoned. All of the centre-right voices are gone.

Tony Allwright surveys letters to the Irish Times after the Gaza flotilla clash of 31 May 2010.
It is hard for a young person growing up in Ireland to realise that the Israelis are the good guys.
It takes a lot of independent thought and standing against the crowd, often including one's own parents and teachers.


This hilariously biased CNN report on talk radio, Oct 2009, reminds me of the patronising way the Irish Times often spins the news.
Instead of wondering why people prefer talk radio to CNN (or blogs to the Irish Times), they bring on New York psychiatrist Gail Saltz to explain what is wrong with their brains.
(By the way, I did some Googling and discovered to my surprise that Gail Saltz is a donor to the Democrats.)
As Greg Gutfeld says, this report is pure bias: "CNN Perplexed By Talk Radio ... Now, only CNN could do this with a straight face. According to the network, some say talk radio is "viciously partisan," without of course defining "some," as "people who work at CNN." And so the segment began, with CNN using a shrink to examine the typical listener, as though he belonged to a rare breed of lizard that dines only on feces."
Comment: "Am I the only one who is at the point where I simply roll my eyes when I see / hear this crap? Do those tools really think people are that stupid?"

Irish Times front page, 25 Apr 2018, says Trump triggers "concerns" that the US will withdraw from the Iran nuclear deal.
"Concerns". Not "hopes".
A classic example of how newspapers write opinion into the news pages.

Irish Times writers include some of Ireland's leading leftists. 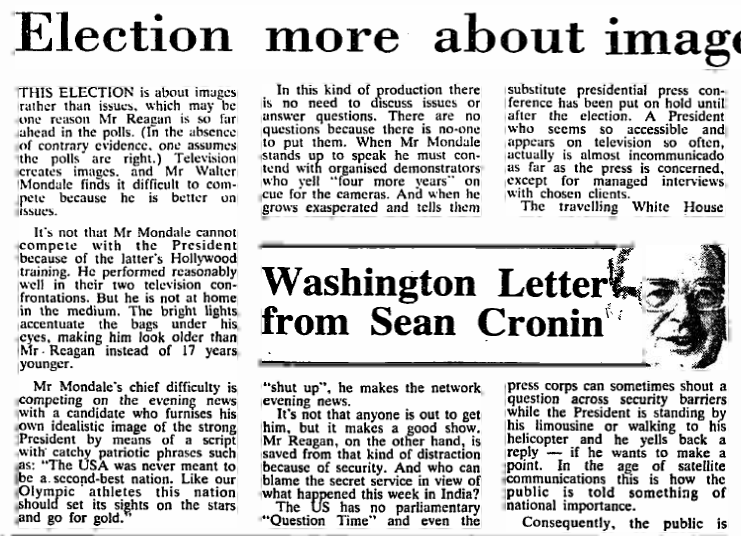 Sean Cronin sneers at Reagan's stunning 1984 re-election, Irish Times, November 3, 1984.
Cronin says (in an echo of the later sneering coverage of George W. Bush in 2004) that the Americans re-elected him basically because they are stupid.
Cronin was the Irish Times' voice on America for decades.
And now they tell us he was Chief of Staff of the IRA?

"Morning in America", Reagan's 1984 re-election ad.
Still moving, even today, long after the sneers of Sean Cronin are forgotten.

John McManus has been writing about business for years. Unfortunately, he has recently started writing about the jihad, and his opinions are absolutely hideous.

A typical headline from 2014 during the Syrian civil war, as Assad tortured and killed 100,000 or more.
"an industrial killing machine not seen since the Nazis".
Tom Clonan visited Syria, and understood nothing.

A common Irish Times trope is for its writer to visit some repressive tyranny - like Laos, Syria or the UAE - and completely ignore the fact that it is a tyranny.


"Last Christmas" (1984) by Wham!
To me (and I am sure to the people of Laos) vulgar consumerism means freedom.

The Irish Times has a particular genius in spinning the news in its headlines:

"Fears that" (something good will happen) 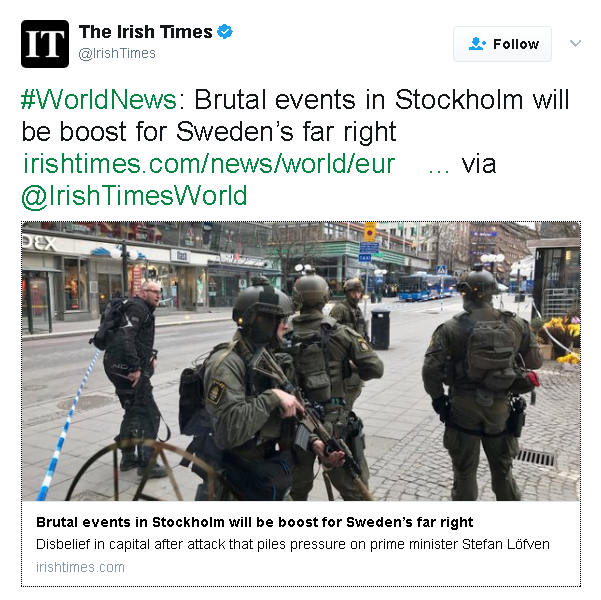 Headline after Stockholm truck attack, Apr 2017.
After a horrific jihad attack in Sweden, the Irish Times is worried that this will boost the fortunes of people who dislike jihad.

The Irish Times' prejudice against Bush 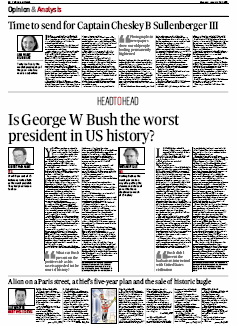 Head to Head: Is George W Bush the worst president in US history?, Irish Times, January 19, 2009. Also here.
Arguing the Yes side is .. someone who hates Bush.
Arguing the No side is .. someone who hates Bush. What a debate!
And that is not to even mention the choice of topic. Why not: Head to Head: Will Obama wreck Bush's achievements in Iraq and Afghanistan?

Wouldn't a headline like this have been more relevant in Jan 2009?
But that would have taken imagination, and thinking outside the centre-left box.
From here. 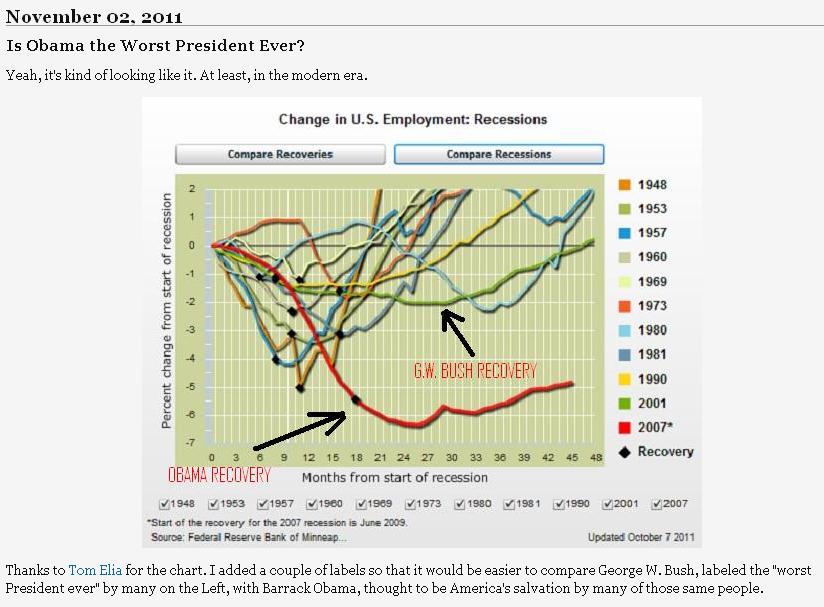 From The Jawa Report. Chart from here.
Don't expect to see this question asked in the Irish Times. 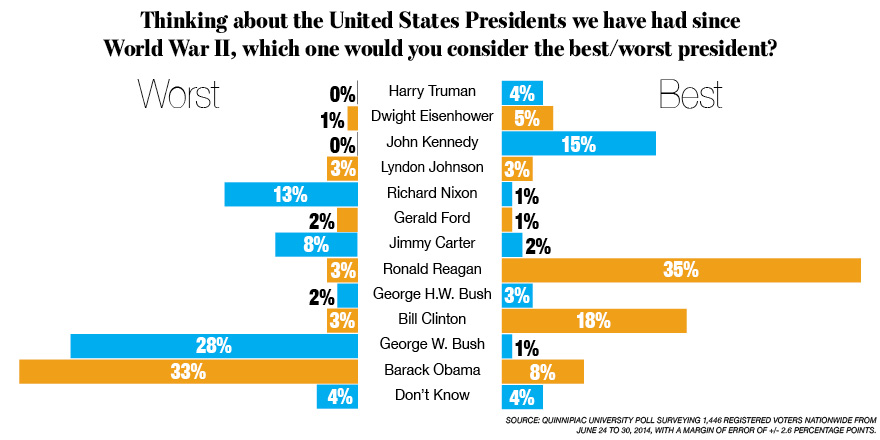 Poll of Americans, July 2014, finds they think Obama is the worst President since WW2, and Reagan is the best. I would agree on both counts.

The Irish Times' bias for Obama

Like most of Ireland, the Irish Times loved Obama from the start. They have indulged him and praised him, and given him the benefit of the doubt in a way they never did with George W. Bush. 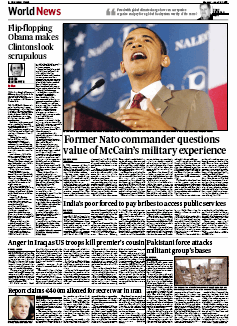 This made me laugh in derision:
30 June 2008 (during the US election campaign): "Former Nato commander questions value of McCain's military experience" Also here.
Ooh, that sounds bad. Until you realise (as the headline hides from you) that this is Wesley Clark, well-known partisan Democrat who ran for the 2004 Democrat presidential nomination.
But somehow "Democrat criticises Republican" doesn't have the same ring to it!

Another headline like the previous.
President Obama, 23 May 2011, at the time of his visit to Ireland, is highly praised.
"not since president Kennedy "have we had a president of which we could be as proud"."
Who said this? Why, the chairman of the Irish branch of Democrats Abroad. Incredible!
But somehow "Democrat praises Democrat President" was not the headline.

Bias for Obama in the 2012 US election

The Irish Times spun hard for Obama in the 2012 election, and their man won. 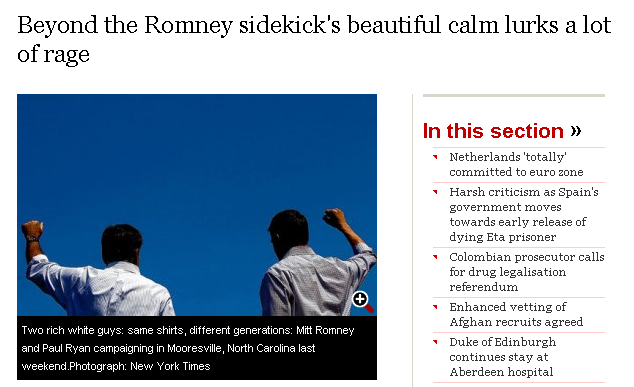 The Irish Times, 20 Aug 2012, sneers at Romney and Ryan as "Two rich white guys".
When did the Irish Times ever call Kerry and Edwards "Two rich white guys"?
Never, of course. Because they were Democrats.
And "white"? As Victor Davis Hanson points out, it is the Obama supporters, not his opponents, who have introduced this unpleasant racial labelling into US politics. 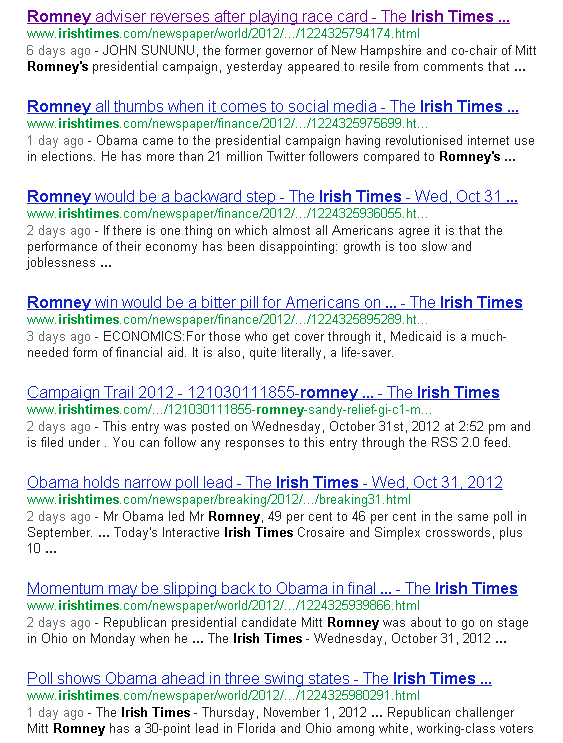 In the tank for Obama!
A Google search for "irish times" romney restricted to the last week before the election yields these headlines.
Every single one of them is anti-Romney. 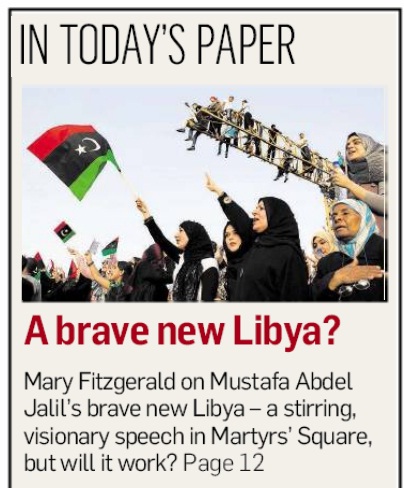 How the Irish Times, 14 Sept 2011, p.2, previews a speech by the head of Libya's interim government promising to enslave Libya under sharia law.
Regime lackey Mustafa Abdul Jalil was Minister of "Justice" in Gaddafi's brutal dictatorship.
Now in this speech he says Libya will be "a state that will have Islamic sharia law as the main basis of legislation".
Brave?? Stirring?? Visionary??
"but will it work?" Will sharia oppression work? I'm sure it will.

The Irish Times has so many anti-Israel writers many of them have separate pages. 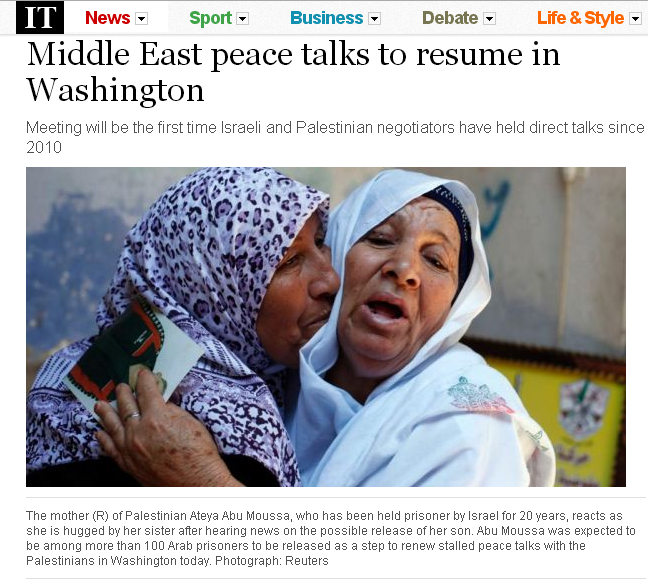 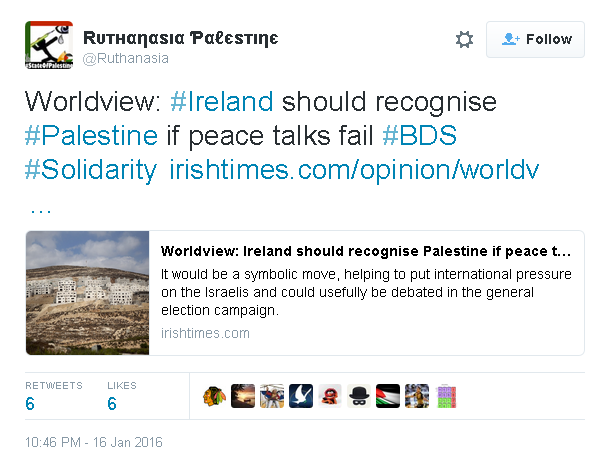 Holocaust denier "Ruthanasia" likes an Irish Times article on Israel by Paul Gillespie, Jan 2016.
From here.
That makes sense to me. But maybe the Irish Times should have a think about this.
If Holocaust deniers like what you say about the Jews, maybe you're on the wrong side. 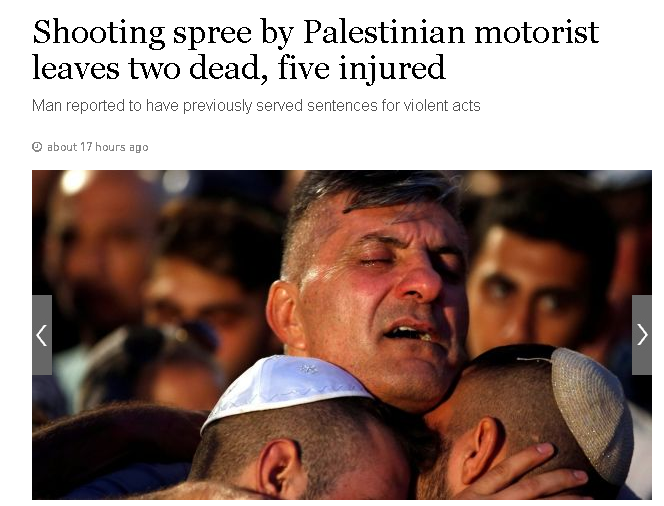 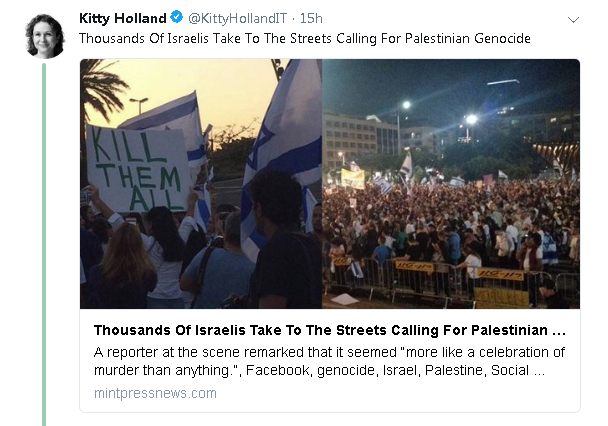 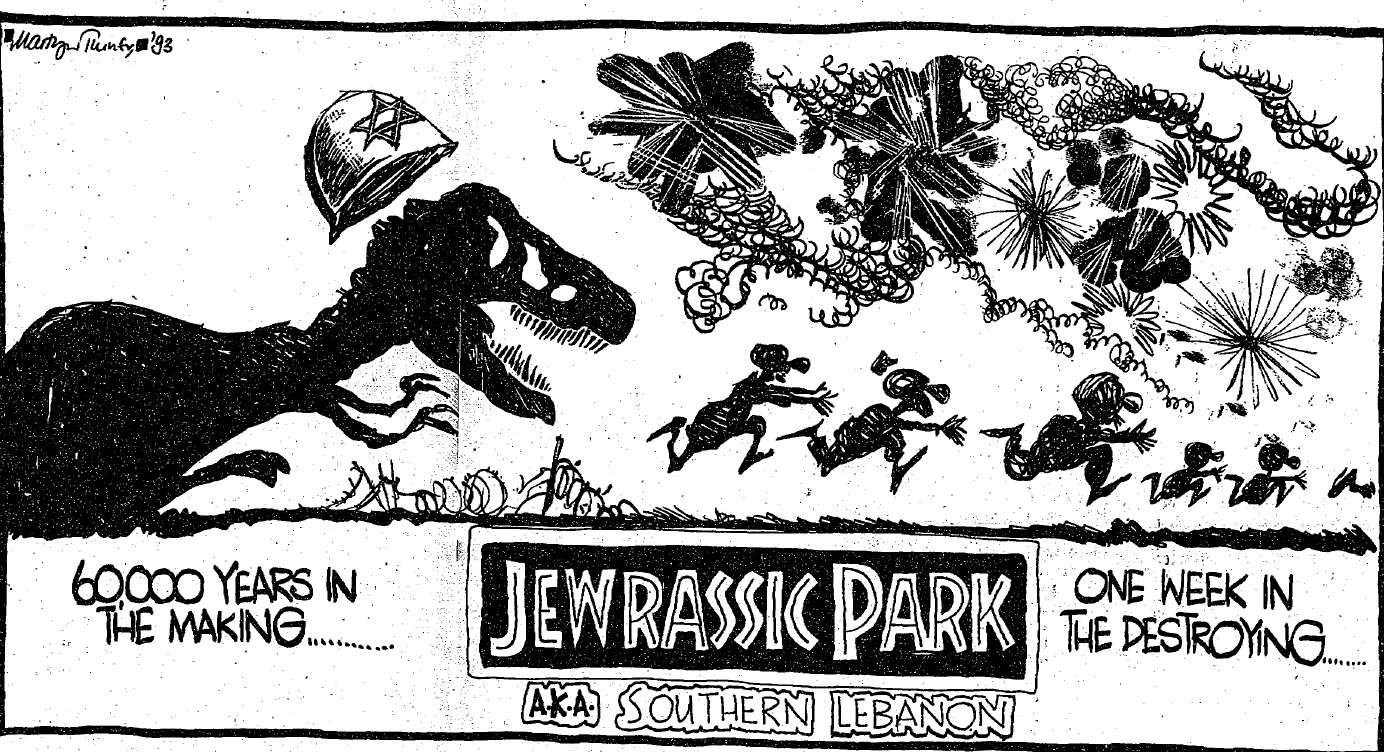 "Jewrassic Park", anti-Israel cartoon by Martyn Turner, Irish Times, July 31, 1993.
This was during Operation Accountability, launched by Israel in response (of course) to Hezbollah and PFLP terror attacks from Lebanon.
The Anti-Defamation League actually protested this cartoon.
Martyn Turner projects Hezbollah's world view onto the Israelis.
Hezbollah, of course, regard all Jews as targets, and responded to Israel by bombing the Jews of Argentina in 1994. 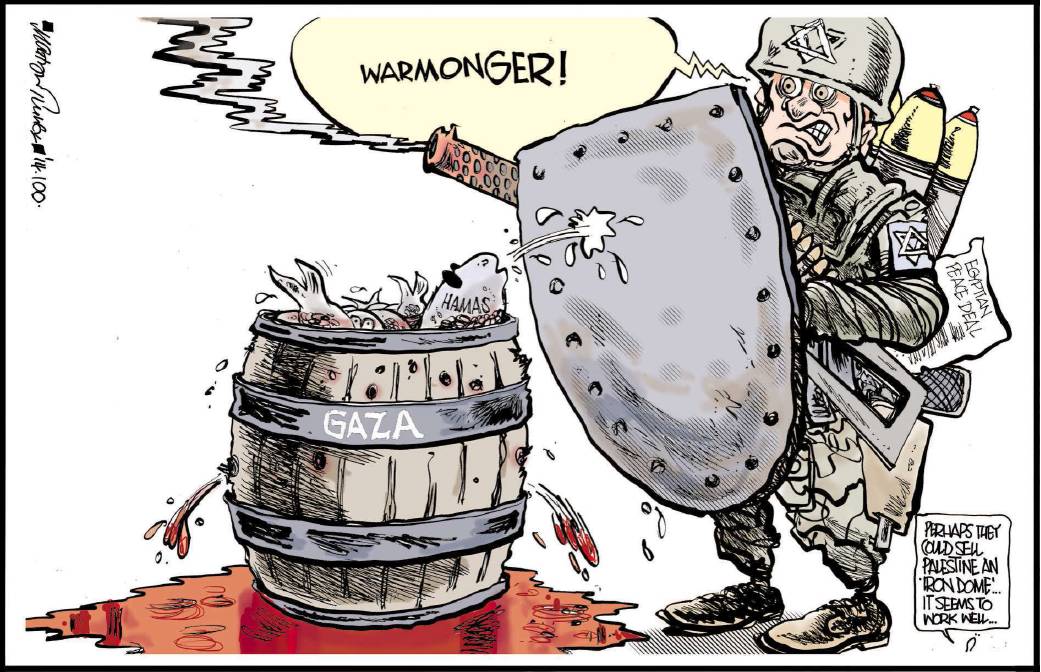 Martyn Turner has spent decades attacking Israel and running spin for the jihad.
Here he is again in the 2014 Gaza war attacking Israel and the brave IDF (who lost 66 soldiers killed).
From Irish Times, July 16, 2014.
What a one-sided fanatic.
See CiF Watch commentary. 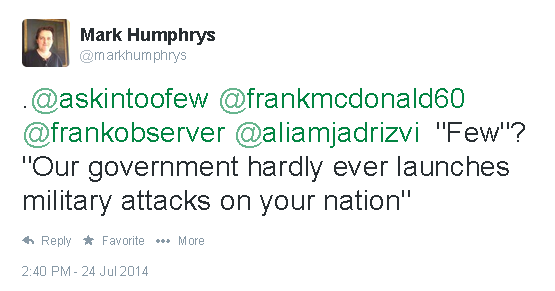 Martyn Turner above has Hamas merely "spitting" at Israel.
And lefties often say that rocket attacks are no big deal, since only modest numbers of Jews are killed.
Above I reply to a leftie who says rocket attacks are "few". Apart from being inaccurate (there have been 11,000 rocket attacks since Israel left Gaza) it is a ludicrous argument: "Why are you angry? Our government hardly ever launches military attacks on your nation."