Cinema and the war

A page about the coverage by cinema (and TV drama) of the modern War on Islamism, the great story of our age.

The law of media diversity: The more expensive media have less intellectual and political diversity 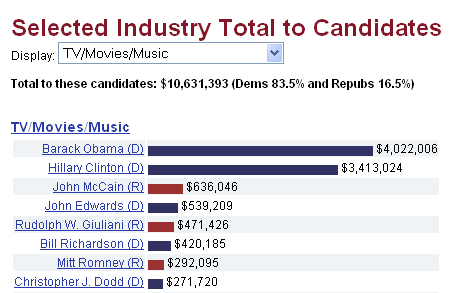 The extreme lack of political diversity in American cinema, TV and music.
Politicial donations to the 2008 US presidential election.
From opensecrets.org.

What movie has ever been made about ..

Cinema has the least diversity of all forms of media. There is almost no political diversity in cinema in the world.


Andrew Klavan on the kind of movies that Hollywood never makes, including:
The Surge, Oliver Stone's film about a lonely Bush's brave decision to stand firm against the media and the defeatists like Barack Obama, and press on to victory in Iraq.

Journey from the Fall (2006). Vietnamese with English subtitles.
A movie about the North Vietnam communist democide.
Why in 40 years has Hollywood never made a Vietnam movie about this topic?

The failure of cinema

As I say, cinema is the least intellectually and politically diverse of all media. A very narrow range of political thought gets made into movies, and as a result, movies simply do not address a large number of topics.

Bollywood has made a few movies that touch on Islamic terror. They tend to be a bit inaccessible (subtitles, very long films, musicals, culture gap, etc.).

I have yet to see any of these, so can't say what they are like.

As I say above, TV is more diverse than cinema. TV has been covering the war since 9/11. It's cinema's lack of diversity I'm criticising here. 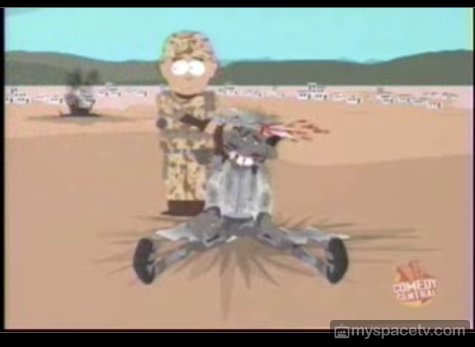 The mass murderer Osama Bin Laden gets finished off in Afghanistan in South Park's "Osama Bin Laden Has Farty Pants" (2001).
Not until 2012, 11 years after South Park, did we get a single Hollywood movie supporting the American military fight against Bin Laden and Al Qaeda.

The worst of TV

The best of TV

Novels also attempt to depict the future nightmares we all dream of but that Hollywood cannot or will not depict.

(1996), directed by Roland Emmerich, unwittingly demonstrates Hollywood's bias.
In the movie, the hero President (making the great speech above) is a fighter pilot (very much unlike the Democrat President in 1996, Bill Clinton).