Barack Obama - The worship of Obama

The worship of Obama

The left-wing politician Barack Obama has been worshipped like a God since he emerged in 2007. The worship does not seem to be based on any accomplishments. In fact, he was worshipped before he had done anything at all. It seems to me like a mass delusion.

Obama is just a bog-standard left-wing defeatist. I cannot see why people are so excited about him. 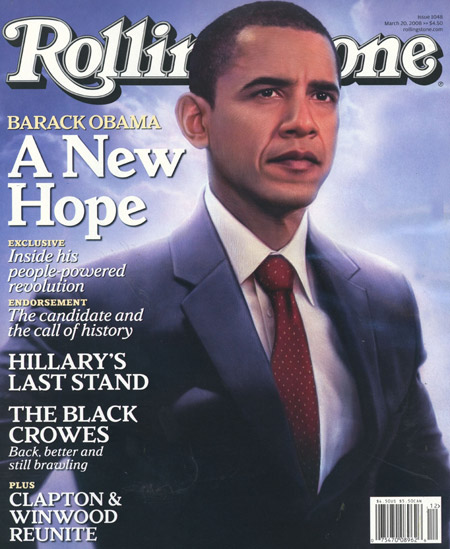 Could anything be more uncool than Rolling Stone magazine's worship of Obama? 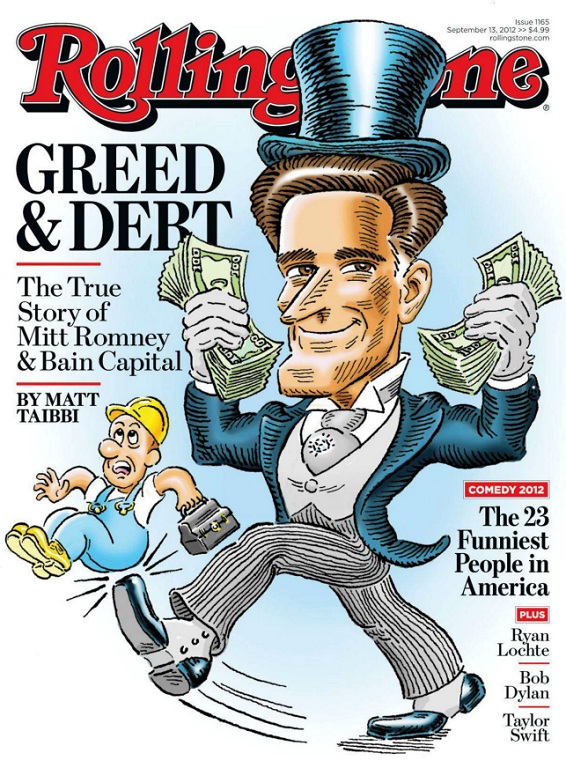 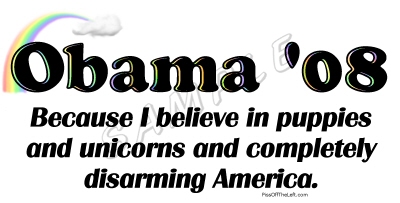 
"He ventured forth to bring light to the world", Gerard Baker, The Times, July 25, 2008, ridicules the Obama worship.
"And so it was ... the Child ventured forth - for the first time - to bring the light unto all the world. He travelled fleet of foot and light of camel, with a small retinue that consisted only of his loyal disciples from the tribe of the Media."
From here. Posted here.

"The One" - The McCain campaign has a bit of fun with Obama's absurd image of himself.

OK this is just really funny.
"The Obamessiah Chronicles, Volume I: The Adulteress".
The "Obamessiah" is asked what to do with the woman caught in adultery.
From The Nose On Your Face.com.

Why young people think the neo-conservative ideas of destroying religious fascism and bringing freedom to Arabs and Muslims are offensive, and why people think Obama's ideas of abandoning foreign Arabs to jihad and genocide are inspiring and idealistic, is something I guess I will never understand. So these videos leave me cold. To say the least.
The "Yes We Can" song.


The "Yes We Can" song. The Reagan version.

From Cuban-American Pundits.
Libertas: "Obama's no Reagan. Reagan inspired talking about the greatness of America not the greatness of "change," Reagan talked about the promise of America, not the promise of "hope." But the biggest difference is that Reagan was always talking to us as fellow Americans not as his followers. Reagan was about America. Obama's above wearing a lapel flag. Reagan was an optimist about America. Obama's a doom and gloomer."

The ludicrous Boy George pro-Obama song "Yes We Can".
I like the tune, but what's the message? Drug-addled brains support Obama? Well, I guess they had the last laugh since they won. 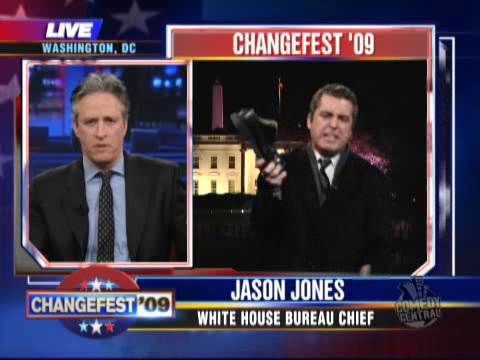 The Daily Show, Jan 2009, brilliantly points out that what Obama said at his inauguration, praised as if it was the wisdom of the ages, is the same as what Bush has been saying for years, receiving only abuse in return.
Image links to a search, since online copies have vanished or are not visible from my location.

The most ludicrous examples of Obama worship


Barack Obama commemorative plate.
"His confident smile and kind eyes are an inspiration to us all."
Search for more copies of this hilarious ad.

"I Voted for a Black Person".
Hilarious spoof of the above.

"The Presidential Pledge", Jan 2009.
Original here.
"I pledge to be a servant to our President and all mankind because together we can, together we are, and together we will be the change that we seek."
Fucking hell, is all I'll say. It's like Maoism.
My favourite bit is when some tattooed thug pledges "To care for America's elderly". Is that a promise or a threat?


"Hope: The Obama Musical", a musical worshipping Obama, from Germany, 2010.
The musical says that Obama "is presented less on a political level, but rather as an emotional person who fights for a new, more forgiving and peaceful world and a better future. ... The people are given new hope by the new spirit of the age."
Mother of God. 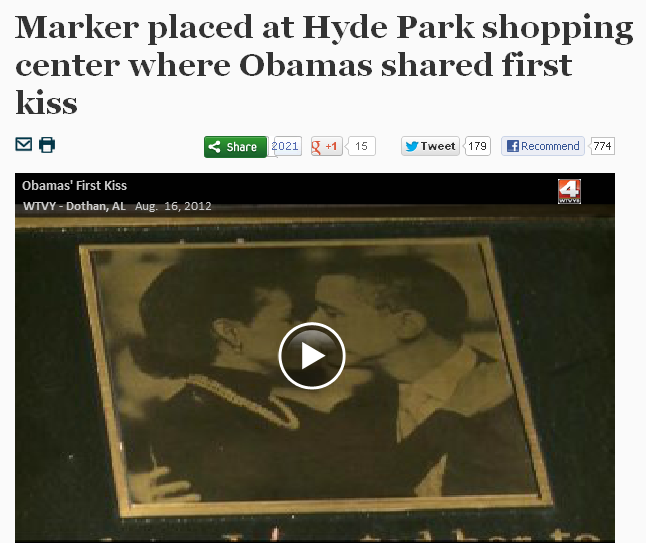 "On this site, President Barack Obama first kissed Michelle Obama."
Report of plaque unveiling, from Chicago Tribune, August 16, 2012.
This is not The Onion. Incredibly, this is real life.
There are hilarious comments, including: "Where is the rock for Obama getting to 2nd base located?"

Comedian Chris Rock says President Obama is like our boss and our dad and we should listen to him, Feb 2013.
Yeah, I'm sure he said that about Bush.
Classic tweet from Jim Treacher, 6 Feb 2013: "Shut up and obey the government, says edgy comedian Chris Rock".

Perhaps more disturbing than the many Americans (and others) worshipping Obama is the thought that Obama himself has an equally high view of himself. 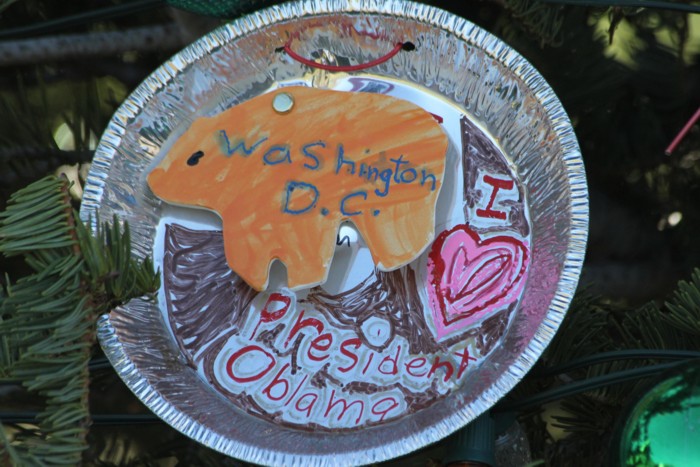 Decoration on the official Capitol Christmas Tree in Dec 2011. 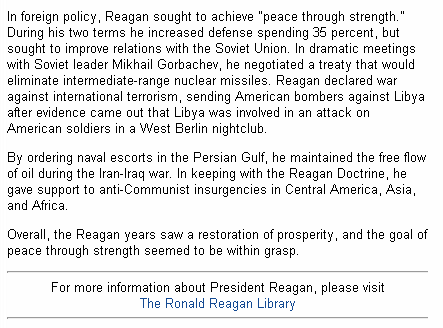 The neutral biography of Ronald Reagan on the whitehouse.gov website during the Bush era (Jan 2008 here). 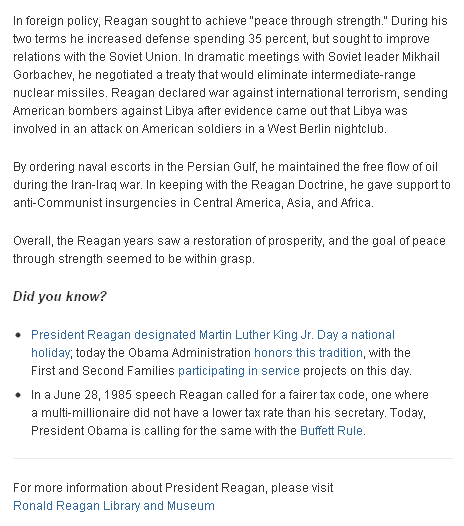 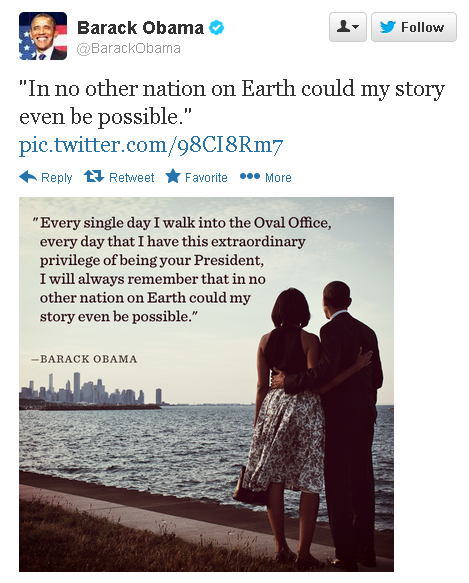 He sure does love himself!
Obama tweets on 31 Jan 2013 about his favourite topic - himself.
Commentary here.

"As for running for president, look, there's a guy in office right now who is smarter than almost anyone you know, who's nicer and who has more compassion than almost anyone you know. And he's having an almost impossible time governing. Why would anybody volunteer for that job?"
- Incredibly handsome Obama-worshipping actor George Clooney, Aug 2011.
His "contribution" to the struggle against the jihad was Syriana.

"as time passes, you start taking it for granted that a guy named Barack Hussein Obama is president of the United States. But we should never take it for granted."
- President Obama worships himself, Mar 2011. What an ego. What a narcissist.

"There's nothing new about Obama: been there, done that. Nothing could be less hopeful, or less of a change. He's the land where we grew up, with its union bullies and marginal tax rates and government automobiles and general air of decay all re-emerging Brigadoon-like from the mists entirely unspoilt by progress. It's like docking at Ellis Island in 1883, coming down the gangplank, and finding everyone excited about this pilot program they've introduced called "serfdom.""
- Canadian-born immigrant to America Mark Steyn, in After America (2011).