In March 2008 we discovered (thanks to a combination of old and new media) something very sad - what Obama's church is like. Obama was meant to be something new and fresh. A modern, colour-blind, post-racist man. But it turns out that for 20 years he has been attending a radical, race-obsessed, anti-American church, where the most appalling hard-left, black separatist, political vitriol against America has been spewed from the pulpit on a regular basis.

In my opinion, no one who attends Wright's church is fit to be US President. Sadly, most Americans did not agree.

The preacher at Obama's radical anti-American church, Rev. Jeremiah Wright (and search), who married him, baptised his children, who seems to have brought him to Christianity in the first place, and who he has credited many times in print and in speeches as an inspiration, turns out to be a nasty, hard-left, America-hating fanatic. Wright says the U.S. government invented AIDS to kill black people. "The government lied about inventing the HIV virus as a means of genocide against people of color." He says the U.S. government sells the drugs that destroy black communities. He says the U.S. had 9/11 coming because of its terrorist policies. "and now we are indignant because the stuff we have done overseas is now brought right back to our own front yards. America's chickens are coming home to roost." He says America is responsible for world terror, wars and poverty: "America is still the No. 1 killer in the world". "We are only able to maintain our level of living by making sure that Third World people live in grinding poverty." He says the U.S. and Al Qaeda are the same thing "under a different color flag". He says the U.S. government knew Pearl Harbor was going to happen. He calls the USA "an oppressive society" against blacks. He tells his audience (including children) to regard the police as corrupt. And on and on, with endless grievance against the whites, as if Obama isn't richer than most of the whites in the world (Obama is far richer than me, for example). Wright himself drives a Porsche and is moving into a 10,000 square foot mansion.

Wright says about America: "Racism is how this country was founded and how this country is still run. No black man will ever be considered for president, no matter how hard you run Jesse [Jackson] and no black woman can ever be considered for anything outside what she can give with her body." Rather ignoring: (a) that Obama is being seriously considered for president, and: (b) that the Republicans appointed a black woman as Secretary of State. Apart from all the anti-white whining, Wright is just so obviously stupid and poorly read it makes you wonder about the intelligence of anyone who would follow him.

It is very sad. Obama was meant to be the post-racist candidate, the one who was over the past and wanted to move on. The one who was grateful for his privileged Ivy League education and his wealthy millionaire status. The one who had no interest in the whining grievance culture, victim mentality and race confrontation of previous black Democrat candidates like Jesse Jackson and Al Sharpton. And now we discover that Obama's mentor is exactly that type of person. And Obama exposes his family to precisely that type of mentality week after week. 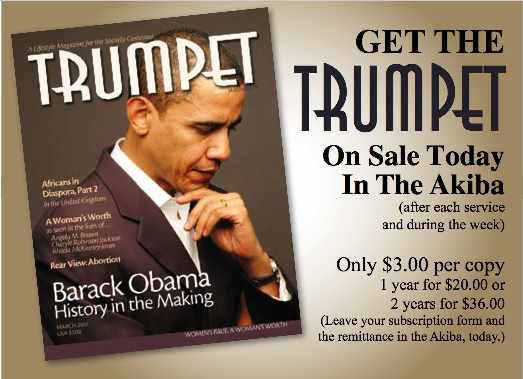 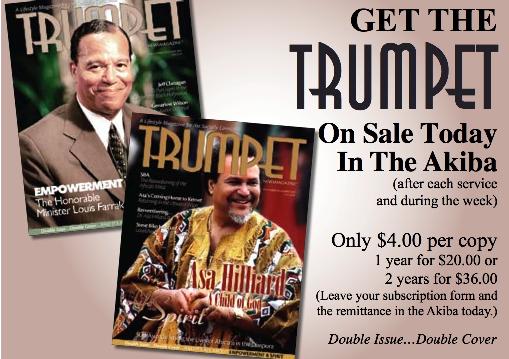 Nation of Islam crackpot and hate-monger Louis Farrakhan on the cover of Trumpet, 2007.
See full size.
Image from this roundup of covers, which says: "Besides Wright himself ... I found only one person who put in as many cover appearances as Obama in the bulletins I currently have available. ... That person would be 'The Honorable Minister Louis Farrakhan' "
Hate-monger Al Sharpton also appeared on the cover in October 2006. 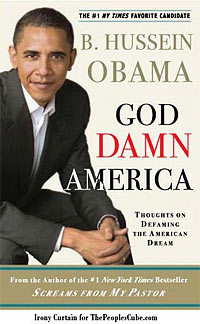 A spoof of Obama's book.
From here and here.