Media - The media bias for Obama

From the moment Obama emerged as a candidate in 2007, the media - both in Europe and America - have disgraced themselves with their partisan behaviour. Fawning and uncritical coverage. A refusal to ever examine Obama's past, his career, his grades, his publications, his religion, his racist church, his terrorist friends. Endless slurs of "racism" against his critics. Has there ever in the history of European and American media been more bias in favour of a candidate and President? In my country, the Irish Times spins for Obama even harder than he spins for himself!

The contrast with the abuse President Bush got from the media is incredible. 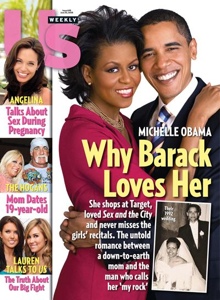 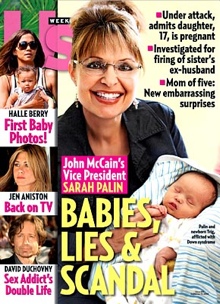 Two pictures from the 2008 US election sum up the unthinking left-wing bias of much of the US media.
Look at the treatment by Us Weekly celebrity magazine of Barack Obama versus their treatment of Sarah Palin.
From here.
As John Nolte says: "Barack's cover could've just as easily read; REZKO, AYERS, & RACIST CHURCH." 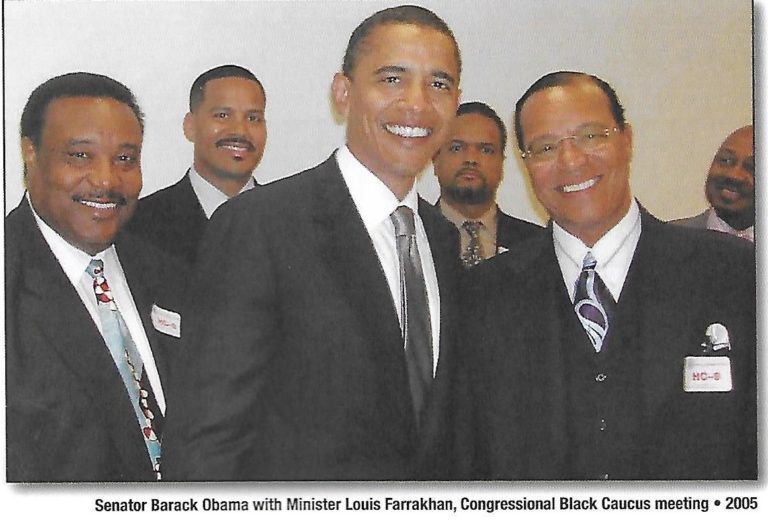 One photo sums up the entire problem with the western media.
Journalist Askia Muhammad took this photo in 2005 of Obama with Nation of Islam hate-monger Louis Farrakhan.
He then agreed to hide it for 13 years so as not to damage Obama's career, only revealing it in 2018 after Obama left office.
That really sums up the modern media!
From here.

Media bias in the 2008 election

Survey of voters, Oct 2008, in the last stages of the 2008 US election.
Voters say the media is more biased in this election than in any previous one.

It is obvious that Palin's questions are not only harder, but the interview is more hostile.
And she was only running for Vice-President! Obama was running for President!
See discussion here.

The media bias for Obama as President

The pro-Obama bias has continued after the election. The media has too much invested in this guy to change anytime soon. 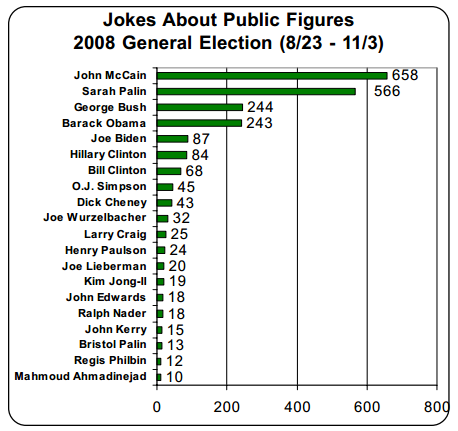 Survey of jokes by late-night comedians in 2008 election: 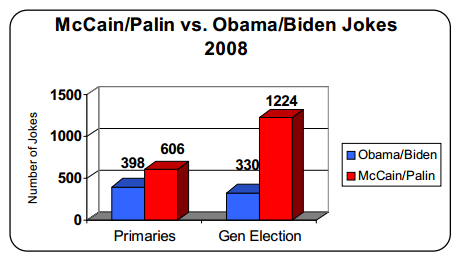 As the campaign moved from the primaries to the general election, the comics told less jokes about the Obama ticket.
And they told double the number of jokes about the McCain ticket.
From survey above.

Media bias in the 2012 election

The Democrats, the left and the media threw a bizarre hissy fit about posters of Obama in 2009 comparing him to Hitler or The Joker.

Bizarre because they had for almost a decade ignored this being done to Bush. 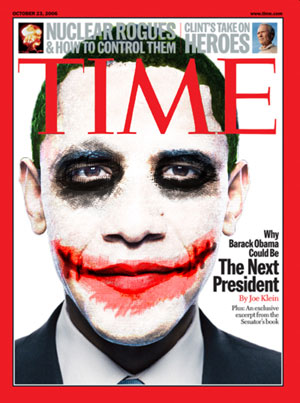 The original image.
From this Flickr feed.
Amusingly, contrary to the confident assertions that the image was racist, it turned out to be the work of a young left-wing Palestinian-American, Firas Alkhateeb (or Firas Al Khateeb or Firas Khateeb).
In an interview he says he prefers Obama to Bush, and doesn't like the way someone added "socialism" to his picture. "To accuse him of being a socialist is really ... immature. First of all, who said being a socialist is evil?"
Flickr censored the above image on spurious grounds. Try search. 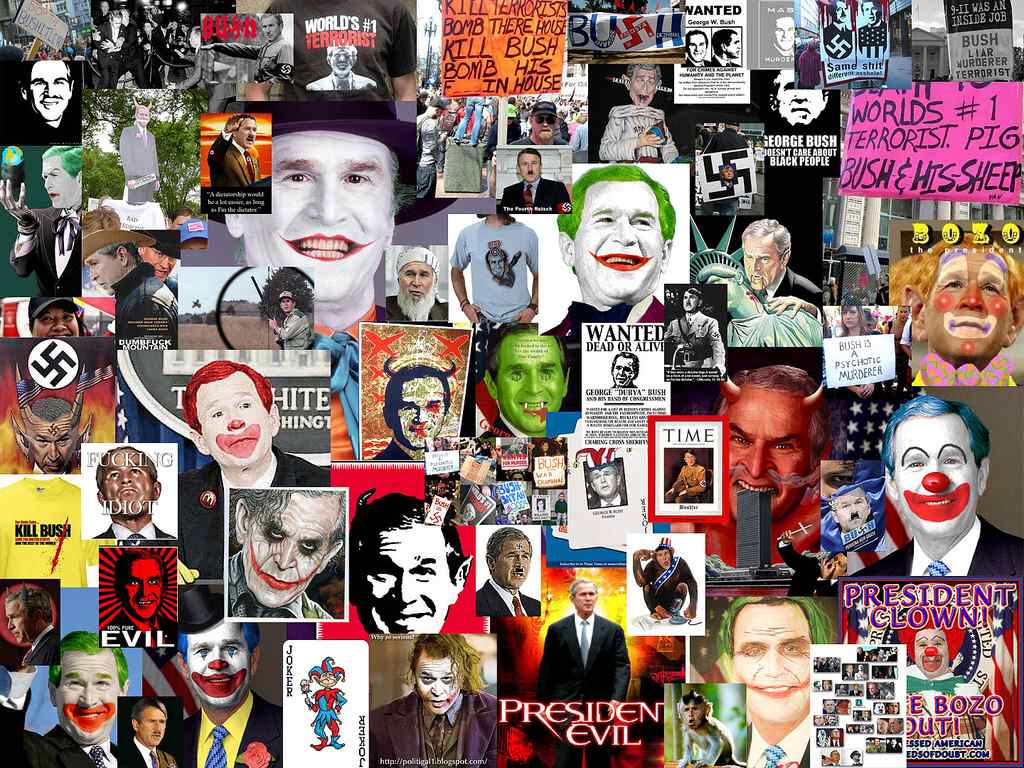 Montage of Bush demonisation over the years.
See original. From here. 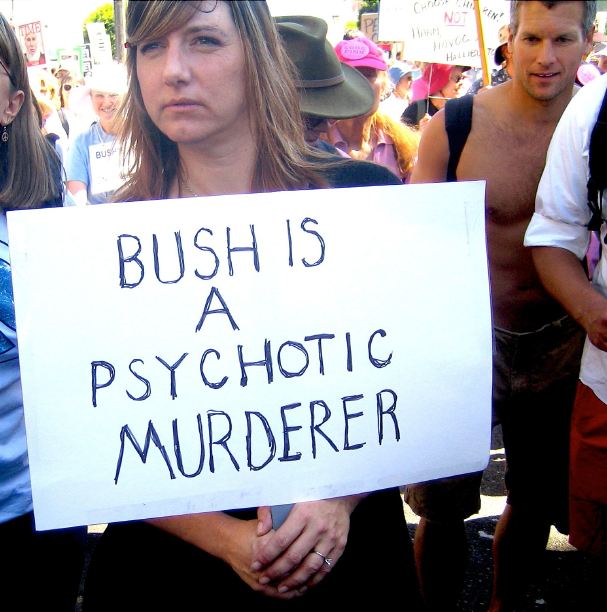 This one really makes me laugh.
From here. 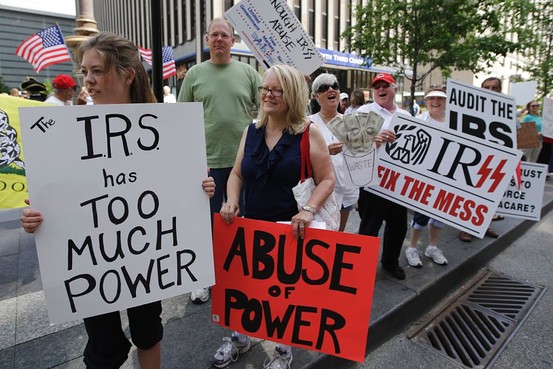 The left goes insane if anyone uses "Nazi" language about them or their friends.
Here is a Tea Party protest, May 2013, about the IRS scandal where the IRS under President Obama targeted conservative groups.
One of the protesters unwisely says "IRSS" comparing the IRS to the SS.
But look at what happened next:

Bush is blamed for Abu Ghraib. Obama is not blamed for pissing on Taliban. He is even regarded as the victim!

Here is a picture perfect juxtaposition from here. 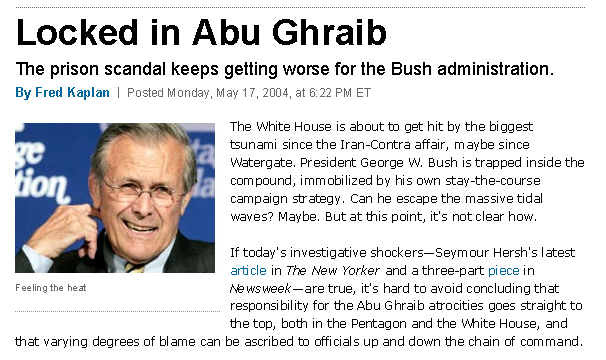 2004: Bush is blamed for the Abu Ghraib scandal. 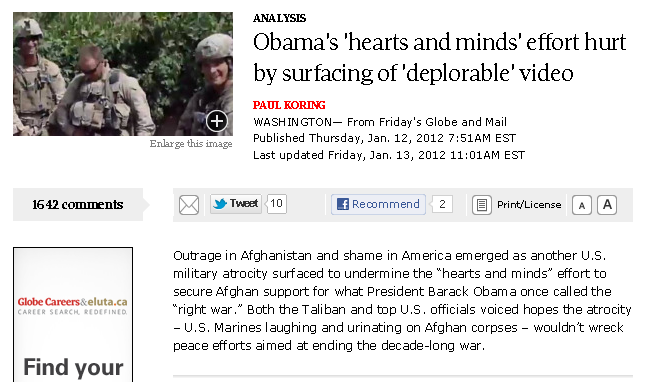 2012: Obama is portrayed as the victim in the Taliban urination scandal.

"The Daily Show" with Jon Stewart tries desperately to save Obama before the Nov 2010 mid-term elections.
His leftie "Rally to Restore Sanity", 30 Oct 2010, featured an appearance by Islamic extremist Cat Stevens.
Jon Stewart's lowest moment, 30 Oct 2010.
Not only does he hold a rally to save Obama (how uncool), but he invites Cat Stevens.
Ironically, he calls it a "Rally To Restore Sanity".
Nick Cohen: "If members of the Tea Party said that American intellectuals who renounced Christianity deserved to die for their apostasy would Stewart be fine with that too? Of course he wouldn't."

Reason.tv interviews the loony left crowd at Jon Stewart's "non-partisan" rally.
My favourite is the woman at 3:19 who condemns the demonisation of Obama: "You don't see reasonable people putting Hitler moustaches on people's faces." When challenged about the billions of Bush=Hitler signs over the last decade she says she agrees with that. "No, but really, if there should have been a Hitler sign on somebody, it probably would have been him, I hate to say it."

Bill Maher's crude abuse of Sarah Palin, while he donates $1 million to re-elect Obama (how uncool).

Newsweek has been one of the most slavish of all the Obama worshipping media. They almost parody themselves. 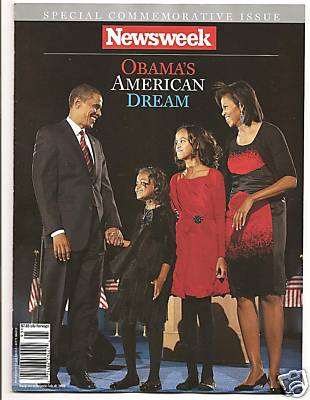 After his win, Newsweek produced in Nov 2008 an 84-page commemorative issue on The Messiah, for the love of Pete. 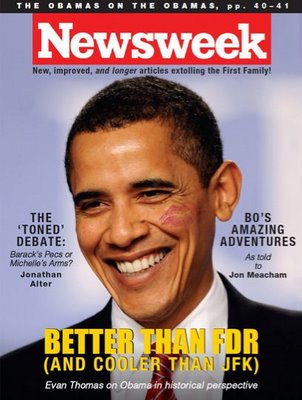 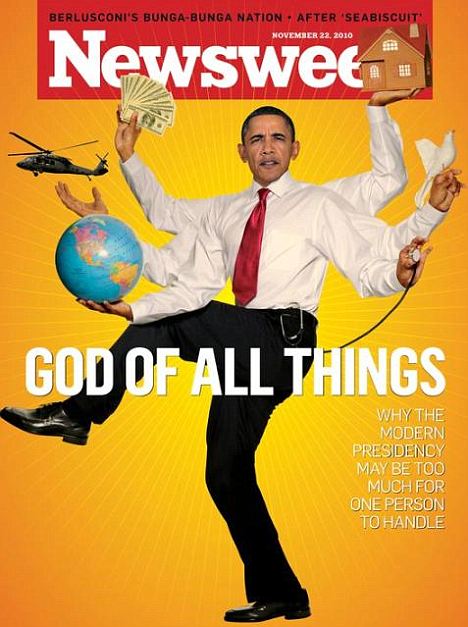 Newsweek, Nov 2010, starts to make excuses for their hero.
So now the Presidency is too hard a job for one person? Yes, I recall their cover saying that about Bush. 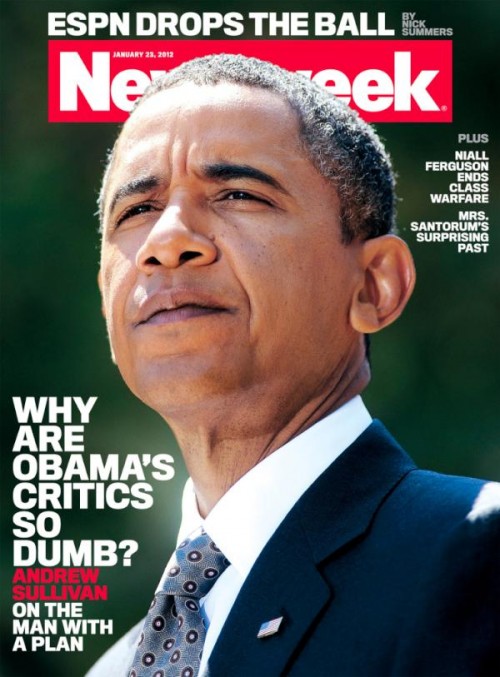 A double whammy:
Newsweek spin for Obama, Jan 2012.
And a reminder of the sad decline of Andrew Sullivan. 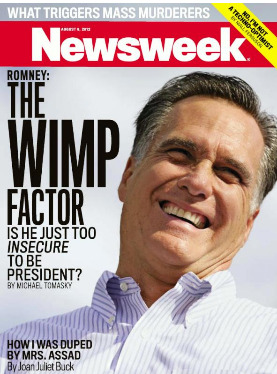 Newsweek working hard for Obama in the 2012 election. 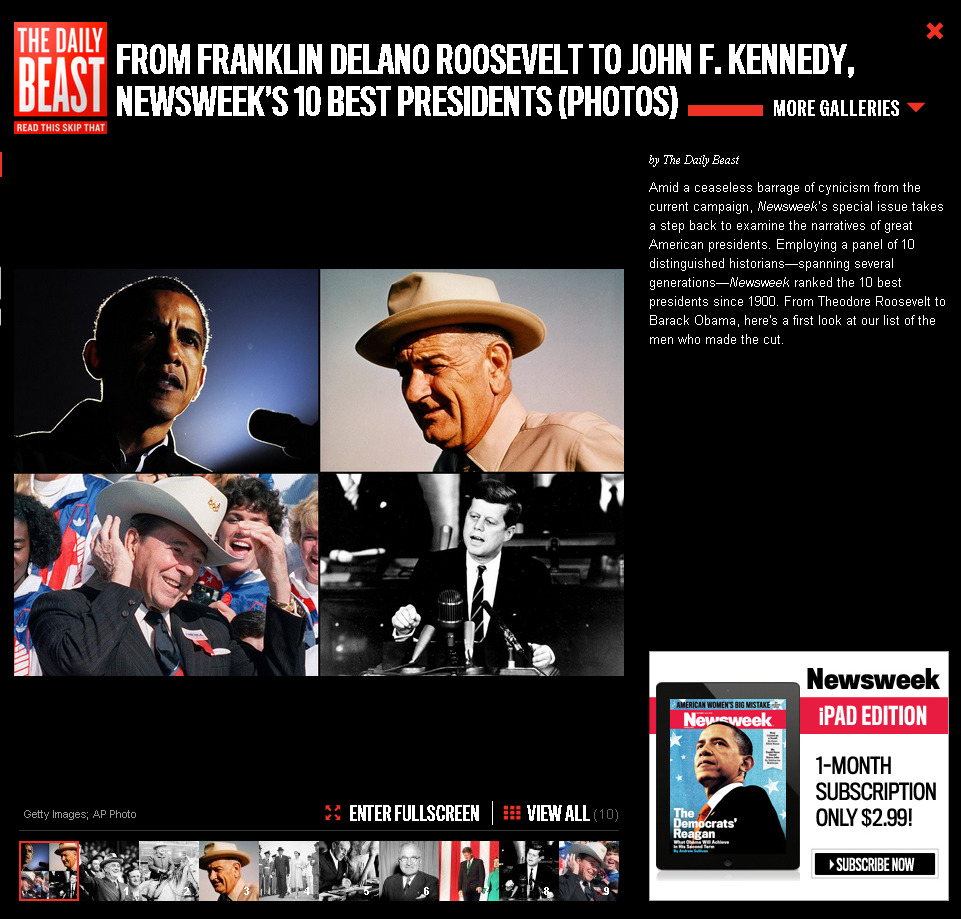 Newsweek pulls out all the stops for Obama in Sept 2012.
It produces a left-wing list of the 10 greatest presidents out of the 20 presidents since 1900.
Reagan is down at no.9, behind Clinton at no.7!
It's bad enough that Obama is on the list (at no.10). But the image department then puts him as the first photo!
And see also the drooling cover by the once-great, but now sad, Andrew Sullivan.

MSNBC news anchor Chris Matthews (of the absurdly named "Hardball") is perhaps the most comical media worshipper of the Obama era.

Chris Matthews is famous for saying in Feb 2008, listening to one of Obama's stupid speeches: "I have to tell you, you know, it's part of reporting this case, this election, the feeling most people get when they hear Barack Obama's speech. My, I felt this thrill going up my leg. I mean, I don't have that too often."

The right calls him "Tingles". 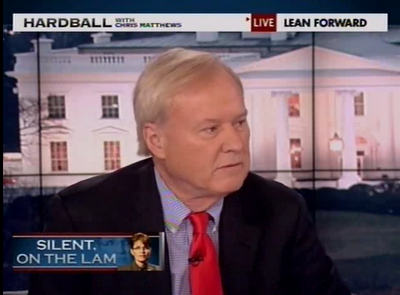 Blood libel against Sarah Palin at MSNBC after the Tucson shooting in Jan 2011. 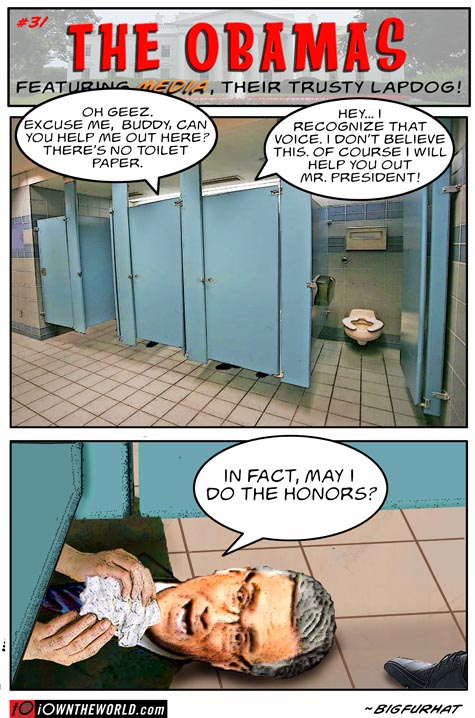 "I have to tell you, you know, it's part of reporting this case, this election, the feeling most people get when they hear Barack Obama's speech. My, I felt this thrill going up my leg. I mean, I don't have that too often."
- Chris Matthews, Feb 2008, listening to one of Obama's stupid speeches.

"We may never know if religion was a factor at Fort Hood."
- Chris Matthews, Nov 2009, on the Fort Hood Islamic terror attack.

"I didn't see a lot of warmth in that crowd out there. The president chose to address tonight and I thought it was interesting. He went to maybe the enemy camp tonight to make his case."
- Chris Matthews describes Obama's Dec 2009 speech to the US military as a speech to "the enemy".

"I was so proud of the president there, I must say. This has nothing to do with partisanship. This is a commander in chief meeting with the troops, as it was right out of "Henry V", actually, a touch of Barry in this case in the night for those soldiers risking their lives over there."
- Chris Matthews, 1 May 2012, hilariously compares Obama to Shakespeare's Henry V at Agincourt.
I note that the US troops are now apparently not "the enemy", now that Obama is running for re-election.

"Obama [whining about Fox] is like a quarterback complaining about the one cheerleader who won't [sleep with him]."
- Greg Gutfeld, Jan 2013.