The media - The media and Israel

The left's bias against Israel and sympathy for the Palestinian cause is a historic mistake. It is a betrayal of liberal principles.

It is the same mistake the left made in the 20th century when it supported communists around the world.

Much of the western media promotes this left-wing narrative against Israel, including media like the BBC and RTE that pretend to be "neutral". Taxpayers in the UK and Ireland are forced by law to pay for anti-Israel state media.


"The Huffington Post: Bias In Pictures." graphically shows the kind of bias in reporting on Israel that is found throughout the western media.

The media bias against Israel

Some excellent sites cover the endless media bias against Israel in both news reporting and opinion.
I particularly recommend CAMERA and Honest Reporting. 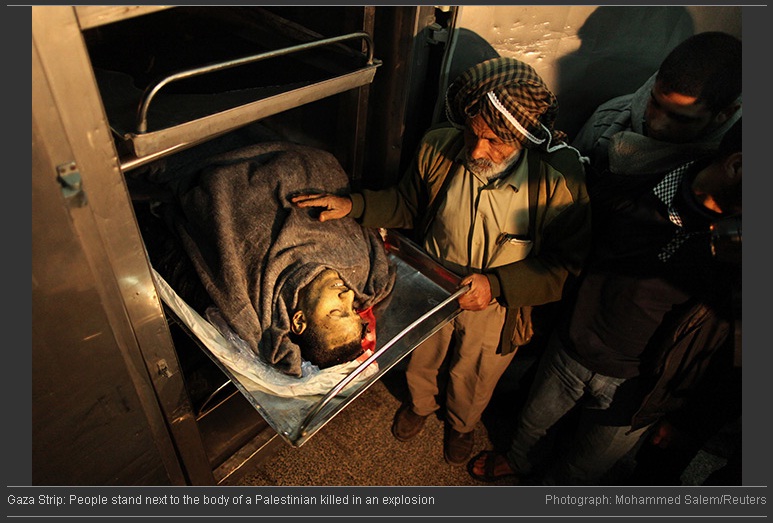 Typical anti-Israel spin in The Guardian.
This picture of an unnamed dead Palestinian appears in "24 hours in pictures", The Guardian, 28 December 2011.
As CiF Watch asks, why did the Guardian omit the information that this guy was an Al Qaeda-linked terrorist who was killed by the brave IDF.
If you want the full story, you won't get it in The Guardian. 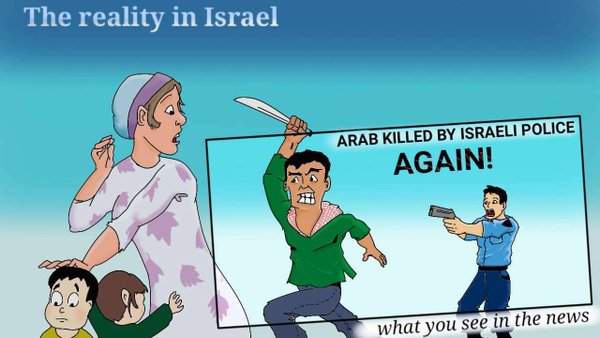 Cartoon attacking the distorted media coverage of the "stabbing intifada" in 2015-16.

"Muslims fearful after Muslim attack on non-Muslims".
Al Jazeera English spins a Muslim terror attack on Jews into a narrative where Muslims are the victims.
Palestinian Muslim jihadis carry out the most depraved killing of Jewish children at Itamar in Mar 2011.
Any objective media outlet would focus on the racist beliefs held by the Palestinians that would allow them to stab a little 4 year old boy and a baby to death (and then celebrate the killings). The clip could look for example at the constant Jew hatred on Palestinian TV, in mosques and in schools.
But no, after yet another Muslim slaughter of the most innocent and defenceless non-Muslims, the closing message is: "Muslims fearful of retaliation after Muslim attack." Of course. 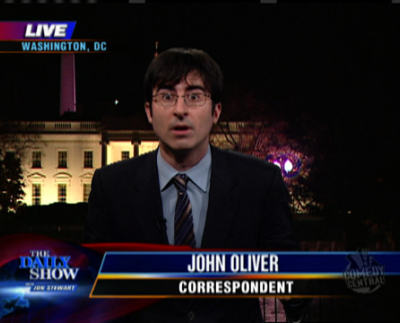 John Oliver was good after the Mumbai massacre in 2008.
He was on the The Daily Show, December 1, 2008. Unfortunately I cannot find any video of it any more.
Anyway, he summed up the jihadis, fighting for a fantasy world that nobody wants. Killing innocent people is meant to attract the world to the virtues of a global Islamic tyranny. "We hate and kill everything you stand for - Join us!"
Their solution to everything is violence. World poverty - The solution is to suicide bomb a hotel. And so on.
It was a good speech. And genius at the end: "One final question: When will these motherfuckers go away?"

John Oliver in 2021 seems the opposite sort of person.
Angry with Israel during the Gaza war of 2021, he produces a video attacking Israel on all sorts of fronts, using of course many of the arguments the jihadis use. Almost every sentence is garbage.
John Oliver answers the question: "When will these motherfuckers go away?" with: "Not as long as people like me promote their analysis."

Have I Got News for You tells a racist, antisemitic joke for no reason, 9 April 2021. 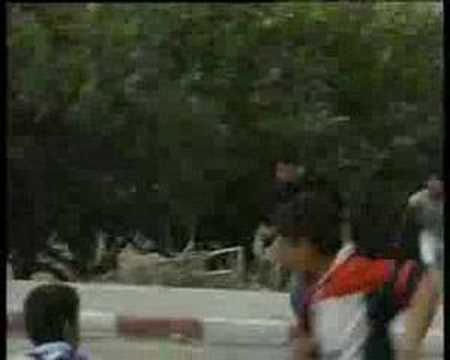 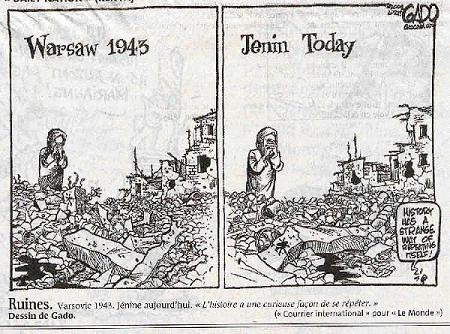 Revolting cartoon in Le Monde, 2002, lies about The Battle of Jenin.

The laws of reporting

Former AP correspondent Matti Friedman does a very good job of explaining how and why western reporters get Israel so wrong.

The Over-reporting of Israel

The use of language

The distorted use of language, especially in headlines, is a key feature of Western reporting of Israel. Once you realise how things could be phrased differently, you start seeing it everywhere. 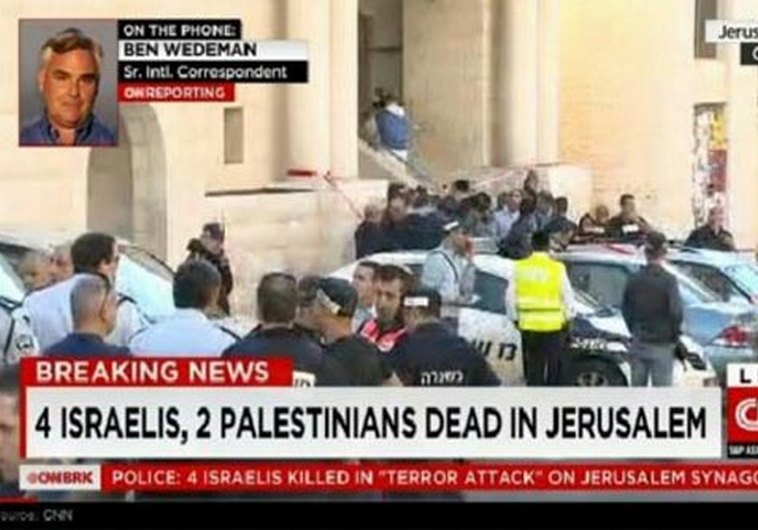 How CNN covered the synagogue massacre, Nov 2014, in which two Jew-killers were shot by police.
"4 Israelis, 2 Palestinians dead in Jerusalem".
See other hopeless media headlines of the attack. 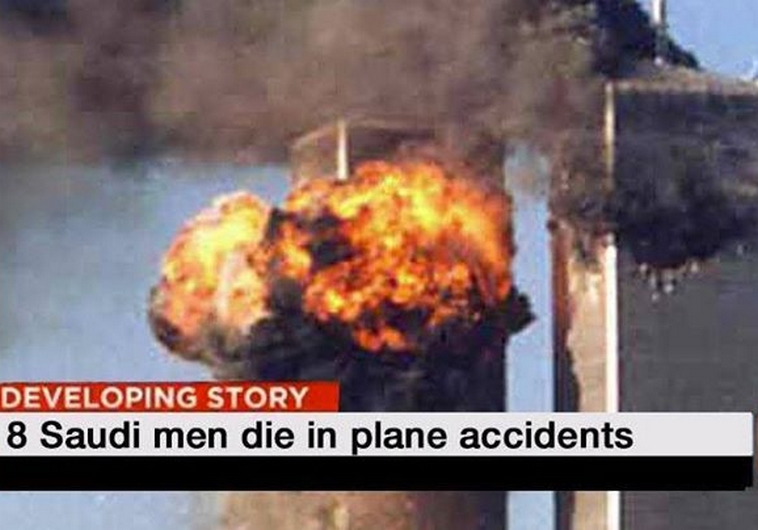 The above spawned parodies showing how CNN would cover other events. 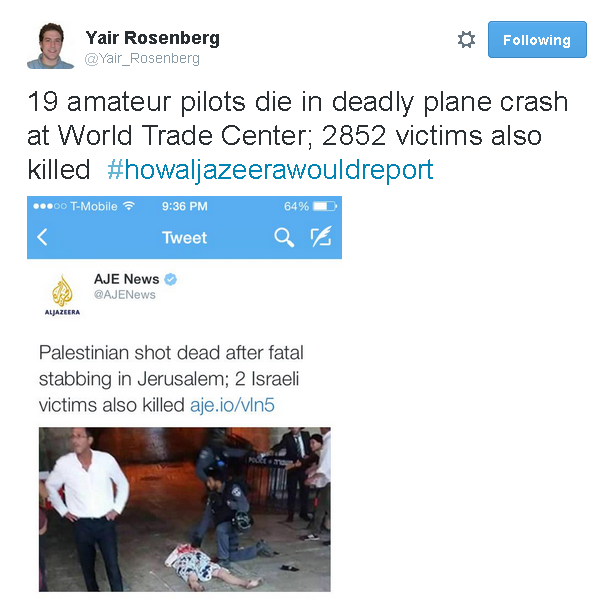 Al Jazeera is mocked for this outrageous headline.
The headline is about the knife attack on a Jewish couple and their infants in Jerusalem in Oct 2015. (The father was killed, the mother critically injured, and their 2 year old was also stabbed by the racist attacker. Another Jew was also killed.) 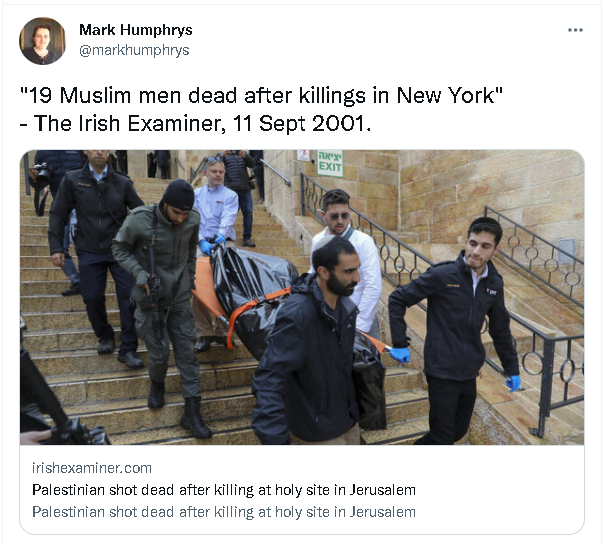 A Hamas terrorist opens fire on random people in Jerusalem, killing one, Nov 2021. Police kill the terrorist.
And this is how the Irish Examiner titles it: "Palestinian shot dead after killing at holy site in Jerusalem". 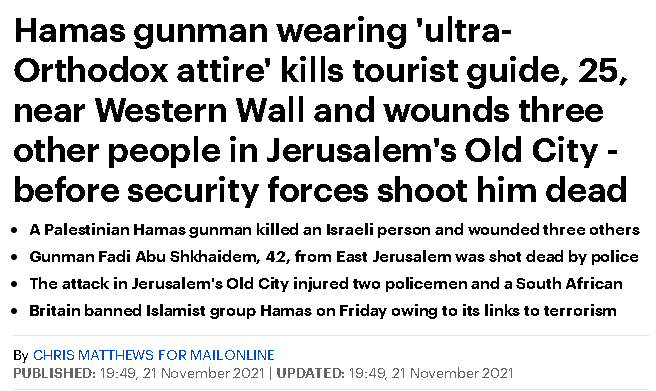 It is possible to be actual journalists rather than propagandists.
Here is how the Daily Mail titled the terror attack above. That is journalism.

Tears for Yassin. No tears for Bin Laden.

Israel was demonised for killing Sheikh Ahmed Yassin in Mar 2004. Yet when US President Barack Obama killed Osama Bin Laden in May 2011, he was widely applauded. Tom Gross compares the reactions: 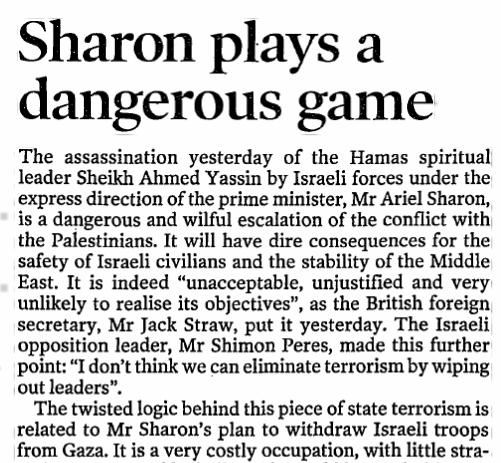 Tears for Yassin in the Irish Times in 2004.
Their editorial of 23 Mar 2004 describes his killing as "state terrorism". 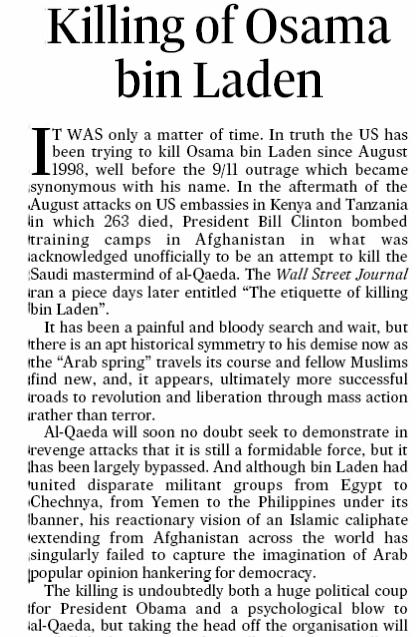 But no tears for Bin Laden in the Irish Times when their hero Obama kills him in 2011.
Their editorial of 3 May 2011 notably does not describe his killing as "state terrorism". 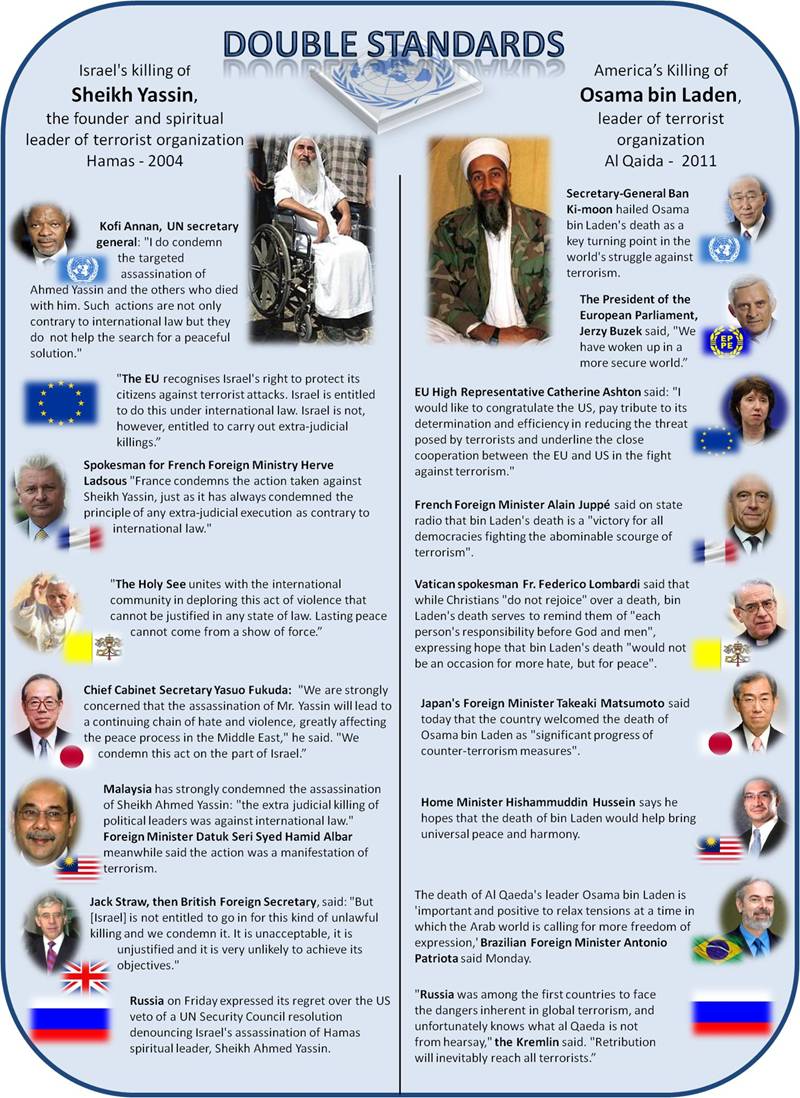 A graphic summary of the double standard.
From here.

Survey of letters about Israel in the Irish Times after the Gaza flotilla clash of 31 May 2010. 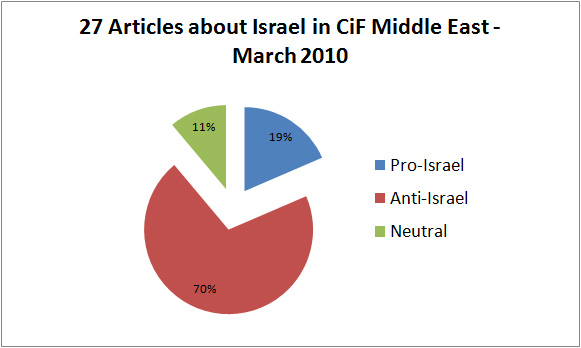 Survey of articles about Israel on The Guardian's "Comment is Free: Middle East" section in March 2010.