Islam - Islam in the West - Ireland

Now I believe in treating people as individuals. Many Muslim immigrants love the West. Many are fleeing from sharia law and Islamic dictators. Many have some (sometimes confused) admiration for non-Muslim societies and economies.

This is to be celebrated. However, there is a substantial minority (10-20 percent) of Muslim immigrants who threaten our western freedoms. They are Islamists - essentially religious fascists who want to impose their religious beliefs on the rest of us. What to do about these aggressors is one of the questions of our time. As in the UK, there is a lack of moderate liberal Muslims in Ireland brave enough to stand up to the Islamists. As in the UK, most of the running is being made by infidels.

Ireland and the Muslim Brotherhood

The major Islamic centres of Ireland are all said to be linked to the far-right, pro-sharia, Islamist organisation, The Muslim Brotherhood.

The Irish state treats the extremist Muslim Brotherhood as representing Muslims in Ireland.

The South Circular Road mosque in Dublin (the Islamic Foundation of Ireland) is said to be linked to the Muslim Brotherhood.
Jan 2015: After the Charlie Hebdo massacre, the French-Tunisian cleric Béchir Ben Hassen approves of killing those who insult the Prophet.
From MEMRI. See transcript: "Even blind people, who lost their sight, avenged [the honor] of their Prophet. Therefore, the punishment for anyone who curses the Prophet Muhammad is to be killed. He should be punished by execution. His killing is sanctioned by a number of Quranic verses, by the Sunna, and by the consensus of the scholars of the past."
See more. Video also here.
Nov 2017: The South Circular Road mosque hosts Béchir Ben Hassen as a speaker. See image.

Kuwaiti preacher Othman Al-Khamis says (2015) that non-Muslims can be attacked and enslaved: "Those who do not want to worship Allah should be enslaved, forced to pay the jizya poll tax, convert to Islam, or fought against. .. Don't feel sorry for them. They are infidels who refuse to worship Allah."
In 2019, he says apostates must be killed: "Apostates are committing a crime, just like adulterers. .. A person who commits apostasy is killed. However, he is left [unharmed] if he repents."
Othman Al-Khamis invited to speak at South Circular Road mosque, March 2016. 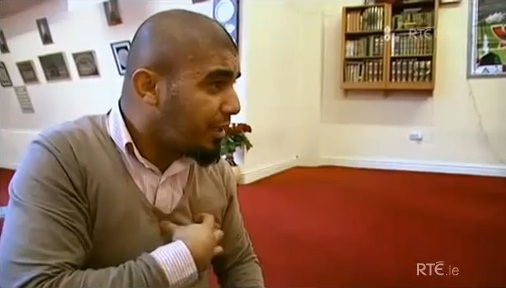 Ian O'Doherty does a TV show, "Now It's Personal", 15 Nov 2011, meeting Ireland's Muslim community, and has some interesting encounters.
Here, Adnan Hameed of the Talbot St mosque comes across as pleasant, but then declares that people who blaspheme against his religion should be jailed, or even attacked violently.
"If you drew a cartoon of the prophet Muhammad I'd probably knock you out".
About the cartoonist living under death threat: "They should have put that guy away, not given him bloody 24 hour security. They should have put him away in prison". 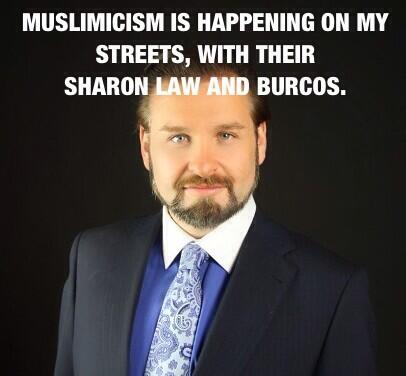 It is hilarious that the left, the media and O'Flynn all missed the real story, which is what does this centre actually believe in?
Do they believe in sharia law? The answer, of course, is yes.
Above, the Cork Dawah Centre "likes" Peace TV, the channel of preacher Zakir Naik, who says apostates and proselytizers should be executed.
If the Cork Dawah Centre disagrees, and condemns the sharia punishment of apostates, I'd love to hear it. Tell me here.

The Cork Dawah Centre "likes" Hamza Andreas Tzortzis, who has called for an Islamic state, and says: "We as Muslims reject the idea of freedom of speech, and even of freedom."
I could go on, but there is enough evidence there for a sceptical media (if only one existed in Ireland) to grill the Cork Dawah Centre on its "likes" and demand it say whether it agreed with sharia extremism or not.
Conclusion: Allan Cavanagh and Victoria White do not know what they are talking about.

I told Allan Cavanagh about this research that makes his meme look ignorant.
Oddly enough, he did not thank me for making him look a fool.
He responded by blocking me.

Left-wing, anti-Israel academic Gavan Titley takes a different approach.
When presented with evidence that does not fit his world view, he simply ignores it.
No reply at all. Simples! 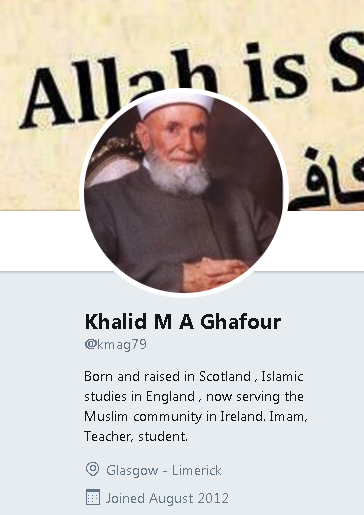 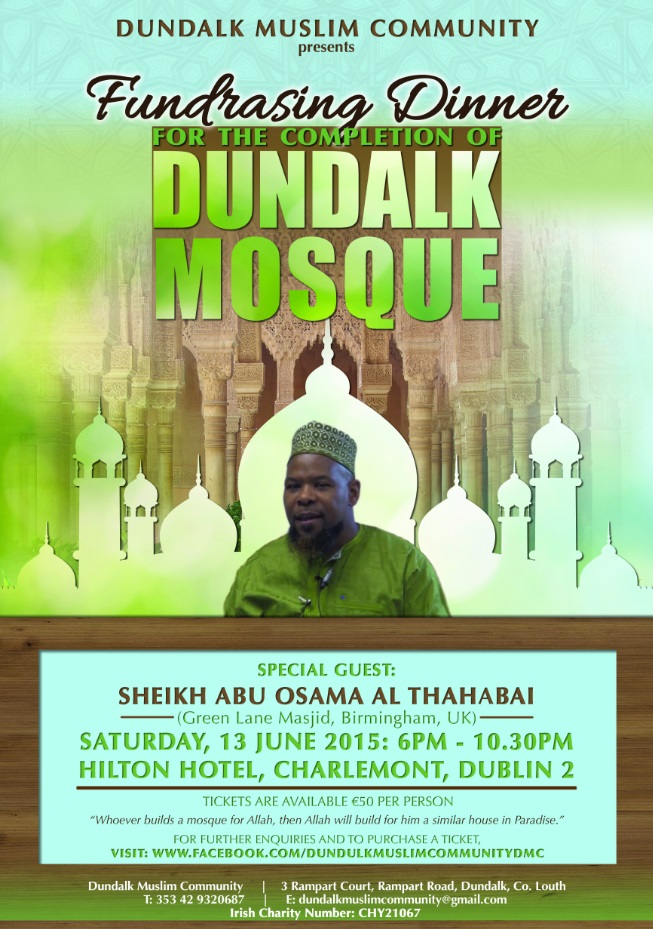 Dundalk Muslim Community invites extremist Abu Usamah at-Thahabi to speak in 2015.
See hate speech from this extremist.
He was filmed by Undercover Mosque (2007). He supported executing apostates and gays.
From here. 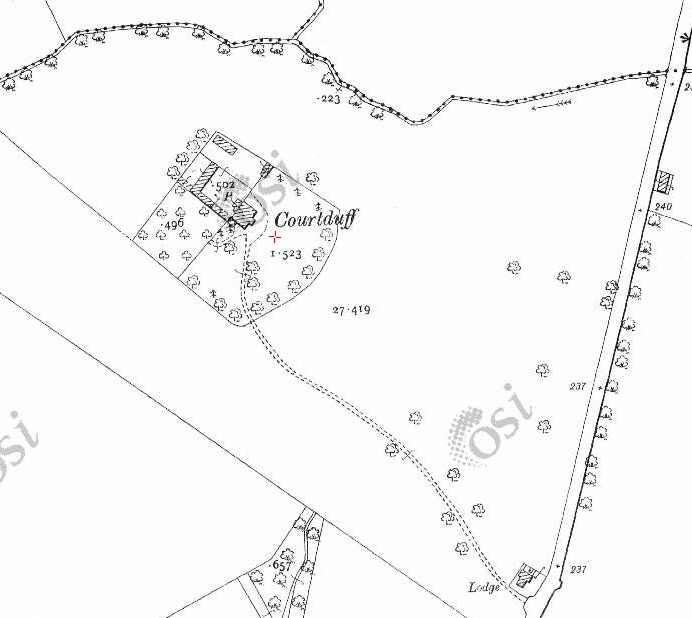 Warrenstown House (then called "Courtduff"), Corduff townland, N side of Blanchardstown, Co.Dublin.
Note that "Courtduff" is a different building from "Courtduff House" to the S.
From 1887 to 1913 map.
Now the proposed site of a huge new (apparently fundamentalist) mosque. 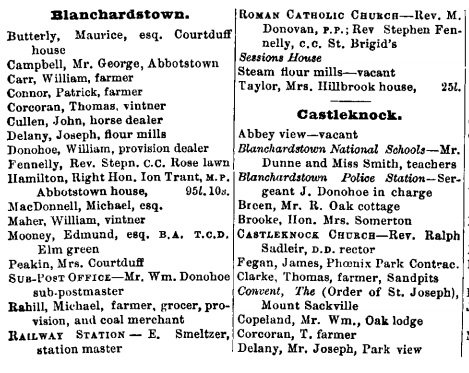 Ireland's largest mosque is proposed for Clongriffin, Co.Dublin. The Irish media shows no interest in what kind of Islam would be preached there. The signs are this would be a Saudi Wahhabist mosque. 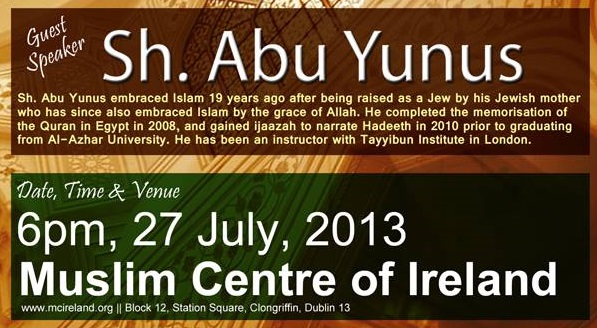 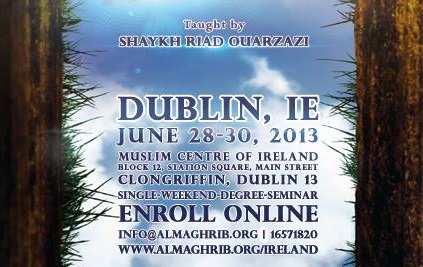 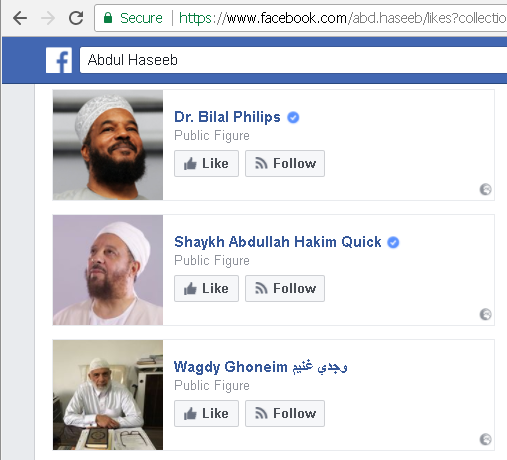 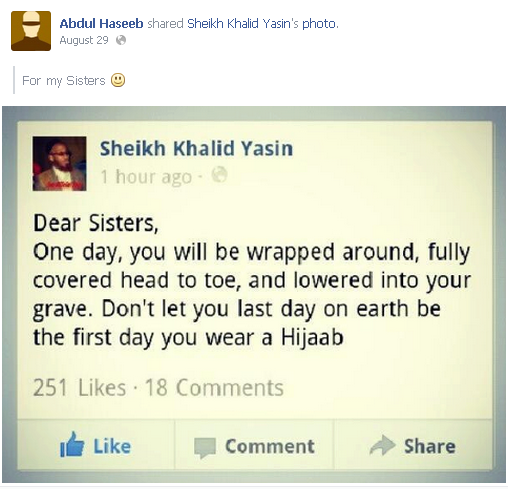 Other groups and individuals

Troubled singer Sinead O'Connor (born 1966), after a lifetime of religious searching, converted to Islam in 2018.
Imagine being angry with the Catholic church, and yet embracing Islam!

Zakir Naik says it is allowed to rape female slaves and women captured in warfare.
Well done, Sinead. You got angry with the Catholic church ... and ended up promoting this guy.

Irish convert Imam Ibrahim Noonan, of the Ahmadi mosque in Galway, discusses the age of Muhammad's wife Aisha.
First he denies the clear hadith that says she was age 9 when 53 year old Muhammad had sex with her.
But his version is not much better. He says she was around 12 or 13. He apparently says it is ok for a 53 year old man to have sex with a 12 year old girl if she is "mature".
See source for first and second and third tweet.

Ibrahim Noonan is apparently a 9/11 truther.

Ibrahim Noonan hates Israel, and got angry with me in March 2022 for supporting Israel.
He said Israel shot dead an innocent woman, Mai Afana, in June 2021.
I pointed out that Mai Afana was carrying out a terrorist attack.
Noonan was so angry at me pointing this out that he targeted my employer. So I had to block him.
Why do people behave like this?

Challenge to Muslims in public life in Ireland

If any Muslim in public life in Ireland can answer the following challenge, tell me here.