The modern right - What am I?

I would describe myself as a moderate libertarian or a neo-conservative or a classic liberal.

So what am I? Much of the political dialogue in my lifetime has been based on the illusion that political parties can be classified along some 1-dimensional line from left-wing to right-wing. But if so, why are the extremes - communism and fascism - so similar? The answer is that the whole 1-dimensional left-right division is (and always has been) rather inaccurate and misleading.

The libertarian David Nolan defines a much clearer, 2-dimensional, terminology, where one axis measures free-to-unfree on personal liberty, and the other axis measures free-to-unfree on economic liberty. See discussion. This model is made for someone like me - a common voter type who is disillusioned with the "1-dimensional" parties. I like left-wing parties' commitment to personal liberty (sexual liberty, freedom from religion, anti-censorship, etc.) but am turned off by their lack of support for capitalism. I like right-wing parties' support for a strong capitalist economy, but am turned off by their social conservative and religious conservative wings. I want to vote for parties that support a free market and a free private life - I can never understand how you can be in favour of one of these and against the other, as most left-wing and right-wing parties are.


This is all about domestic policy - what kind of society one wants to live in. One could expand to 3-dimensions by considering foreign policy - whether one should spread the model to countries that do not have it (my answer: yes), or be isolationist unless attacked (most doctrinaire libertarians, e.g. the Libertarian Party in the US).


So in conclusion, what am I? I am obviously not left-wing. I think the left is wrong about almost everything. I would like to call myself a "liberal", but the meaning of that term has changed since the 18th-19th century, and now tends to mean someone hostile to capitalism and supportive, like the left, of a powerful state. The modern liberal also tends to be hostile to America and Western supremacy and often supportive or defensive of third world tyrannies. So I am not a liberal, in the modern sense. I agree with conservatives on many things (notably capitalism, crime, foreign policy) but ultimately I am not a conservative since I believe in a free private life. I guess I would describe myself as a moderate libertarian or a classic 18th-19th century liberal. 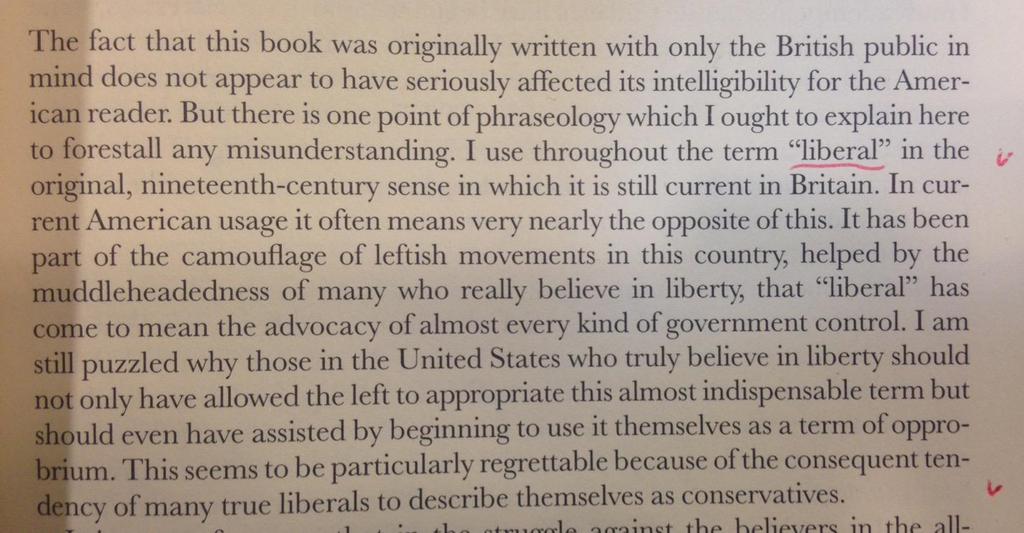 Hayek in The Road to Serfdom describes how the word "liberal" has been corrupted in America to mean "leftist".
Scan from here.

The Political Compass rates Irish parties.
I am in the bottom RHS corner.
I liked the PDs, but they are now gone.
The rating leaves out foreign policy, which is where Labour (and all the left) fail for me, and so I would go for FG or FF.

The Political Compass rates UK parties.
I am in the bottom RHS corner.
The rating leaves out foreign policy, which is where the Lib Dems fail for me, and so I would go Tory or Labour.

I am a libertarian, not a conservative

I am not a conservative myself. My understanding of classic conservatism is that it does not believe in a free private life. Whether it is the banning of contraception in Ireland, the banning of "pornography", the War on Drugs, the oppression of homosexuals, or the forcing of religion on non-believers in schools (like creationism).

I am not a conservative. I am a libertarian or a classic liberal. However, on issues such as the economy, crime and foreign policy, I think the conservative analysis is pretty much right.

The right are the idealists now

If I could be considered in the conservative camp, it would be as a "neo"-conservative:


These set themselves in opposition to "paleo"-conservatives such as:

It is true that the neo-cons do contain members of one of the above groups - namely neo-con religious conservatives like Reagan and George W. Bush, and even neo-con creationists. Obviously I am a neo-con on matters of politics only. When it comes to questions of science and religion, I have no particular interest in what the neo-cons have to say. Instead, I read other writers.

Nazis hate neo-cons for their anti-racism, and their support for the Jewish democracy of Israel.

I had another rather uninteresting encounter with extremists in Oct 2006.

Has the BNP "reformed"?

Right-wingers who support the BNP may also like to consider that their economic policies are socialist.
They also may appear to fight Islamism but they oppose the allied war effort in Iraq and Afghanistan and describe the UK-US troops as war criminals.
The BNP is a left-wing, economic socialist, anti-War on Terror, anti-Israel party.
From The Political Compass.

The EDL - uneducated street rioters.
I can't see Edmund Burke at the above protests, can you? 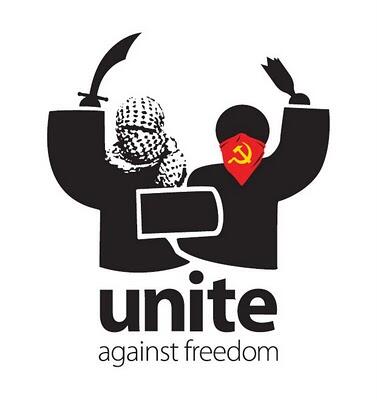 I am no fan of the loony left Unite Against Fascism (UAF) though.
One of their leaders is Islamic extremist Azad Ali. See here.
They are not very concerned by Islamic extremism: "On telephoning UAF's office to clarify the group's position on Islamic fascism, One Law for All was told by a UAF representative that there was "no such thing"."
Graphic from here.

Robert Spencer's support for the EDL 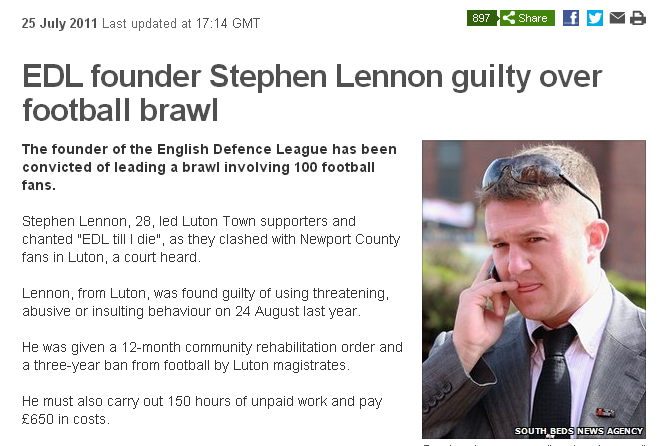 I can't see Edmund Burke getting involved in football violence either, can you?
This is the leader of the EDL, "Tommy Robinson" (Stephen Lennon), being convicted for the most shameful football hooliganism in a fight between Luton Town and Newport County in Aug 2010.
Seriously? Football hooliganism??
And defenders of the Western Enlightenment are meant to support this guy? 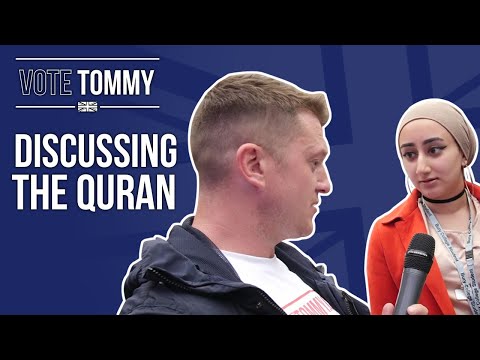 "Tommy Robinson Chats to Muslim Lady on Campaign Trail", May 2019.
Amazing example of Tommy Robinson being intelligent, and not fighting with the police.

Britain First is a BNP-like organisation with a simplistic and illiberal reaction to Islamic extremism.

It has carried out thuggish "invasions" of mosques. 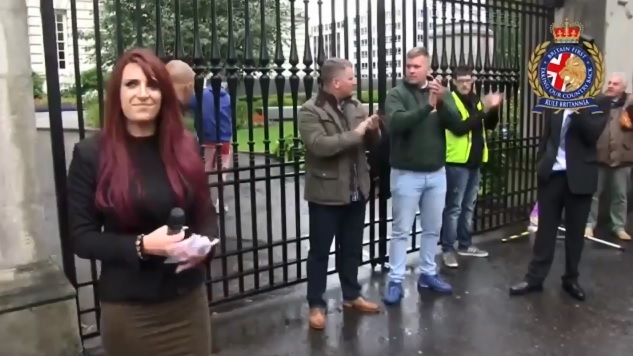 Jayda Fransen of Britain First was arrested in Nov 2017 for this speech in Belfast in Aug 2017.
The speech is terrible. She says there are no moderate Muslims. (Opinion polls prove her wrong.)
She says that every Muslim is commanded to kill the non-Muslims. (Which is sort of true, in theory, but few Muslims believe that, especially in the West.) She paints every single Muslim as a violent threat.
She opposes religious freedom. She opposes the building of any mosque. She paints every single mosque as a threat.
A nasty, nasty speech.

I am suspicious of Pegida also.

I don't think Pegida are Nazis, but I am sceptical. They propose restrictions on freedom of religion. I disagree with such ideas. 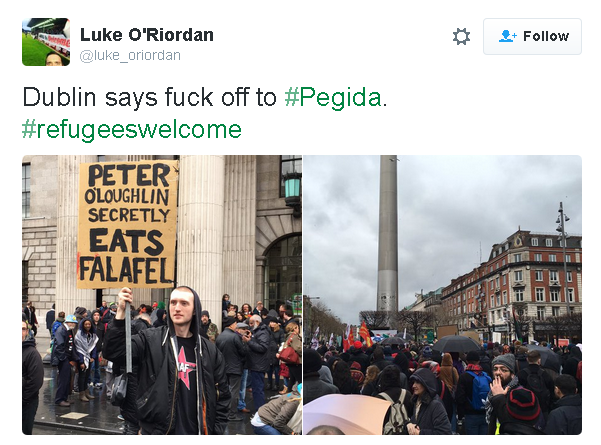 The anti-Pegida protesters tend to include some hideous people.
Here an anti-Pegida protester in Dublin, 6 Feb 2016, wears a Red Army Faction terrorist shirt.
This is tweeted out by Luke O'Riordan, a production executive with the Irish Sun.
I pointed out the shirt and he was so angry he blocked me.
He later went to work for Sinn Fein, so maybe he would have blocked me anyway.

I don't think Pegida are Nazis. However, the two popular accounts which have used the name "Pegida Ireland" on Twitter, "jackthelad347" and "ladd84202", are Nazis.

After their posts were exposed, both of these accounts dropped the "Pegida Ireland" branding. 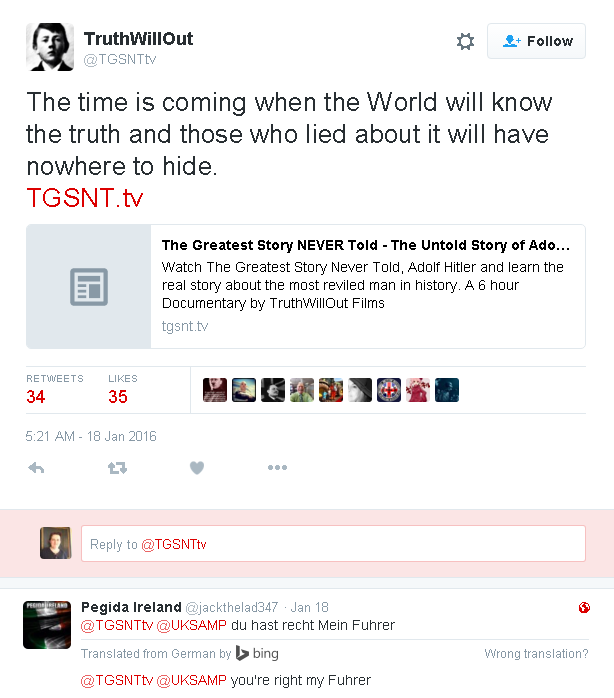 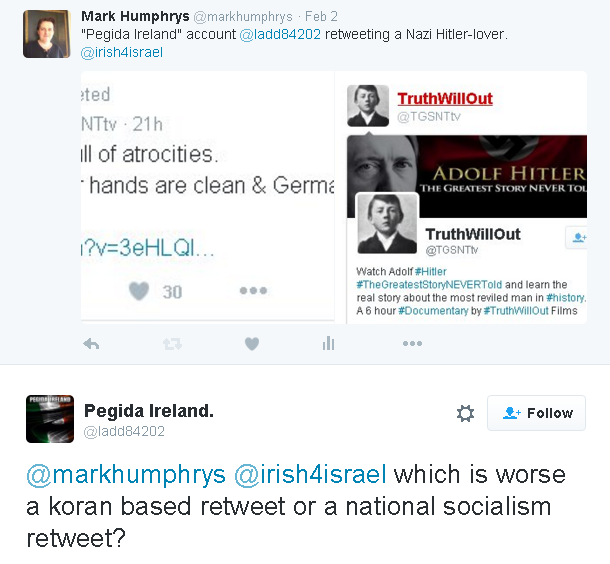 Another popular "Pegida Ireland" account "ladd84202" also retweets the Nazi, Feb 2016.
When I called him out on it, he defended it.
He then blocked me.

So I don't like idiot street rioters. I don't like racists (and they don't like me). I'm not Jewish. I'm not a religious conservative, or even a Christian. And I can't stand Nixon and Kissinger.

If you haven't heard of a lot of them - then, frankly, you should read a bit wider.

In defence of neo-conservatism