Blogs I used to read - LGF

2001 to 2008, daily read:
Charles Johnson's blog Little Green Footballs (LGF) was the leading counter-jihad blog for years after 9/11. From 2001 to 2008, LGF was sometimes a daily read for me. It was where counter-jihad people would go to share links, expose jihadists and Islamists, attack the left, celebrate the killing of Yassin, the killing of Zarqawi, and the re-election of Bush.

2008 to 2009, strange transition:
And then the most incredible thing happened. Around 2008, Charles Johnson started fighting with everyone on the right. He started by making some reasonable points. But it got worse and worse, until he was fighting with every single person in the counter-jihad except himself. Eventually he left the counter-jihad altogether and turned LGF into a loony left blog. It is now the opposite of the old LGF.

2009 to date, forget it exists:
I dropped LGF from my RSS feeds in 2009. Now I regard LGF as a loony left site. I enjoyed reading The Diary of Daedalus for some years, to laugh at the new LGF. But eventually I started forgetting that LGF exists. 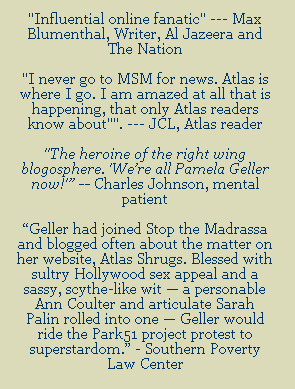 How Pamela Geller now references Charles Johnson on her blog.

I am blocked on Twitter by Charles Johnson.
Pathetic.
His disciple Gus 802 also blocked me.

Hard to believe now, but as late as 2008 LGF was still a good blog to visit.
See full screenshot.

The LGF blog war started as an argument between LGF and the following anti-jihad blogs. But it escalated to become LGF v. just about all counter-jihad blogs.

The argument began in 2007, mainly over the nature of Vlaams Belang. LGF was pointing out their anti-semitic and neo-Nazi past (and perhaps present). Some other counter-jihad blogs were defending them as now reformed allies against the jihad. This, though, rather reminds me of the claim that the BNP has "reformed". I find the sceptical view of these kind of Euro-nationalist groups the most convincing.

Charles Johnson has few allies in this:

Why can't LGF and the Guardian quote Robert Spencer?

LGF bans and de-links everyone

LGF bans its most loyal readers: 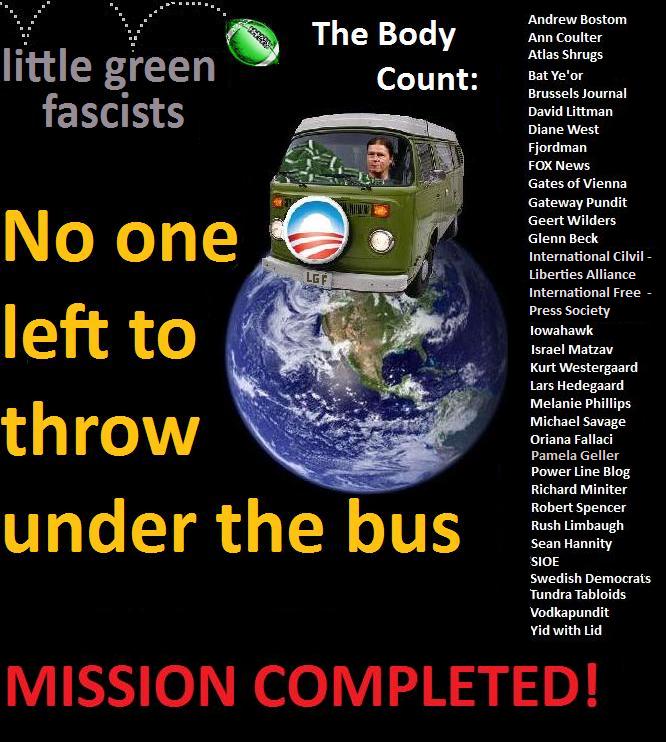 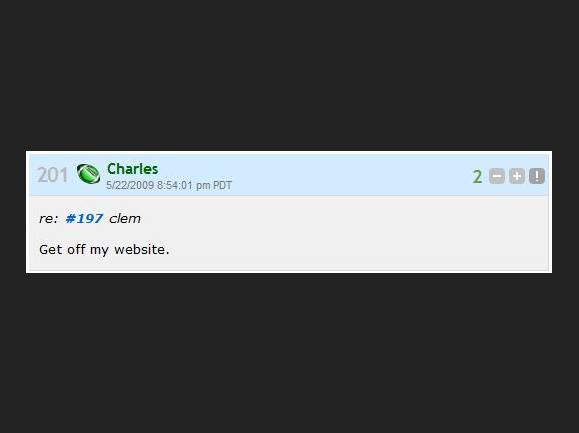 The hilarious "Get off my website!" slideshow from The Diary of Daedalus.
LGF bans its most loyal readers and most prolific commenters.
See images. 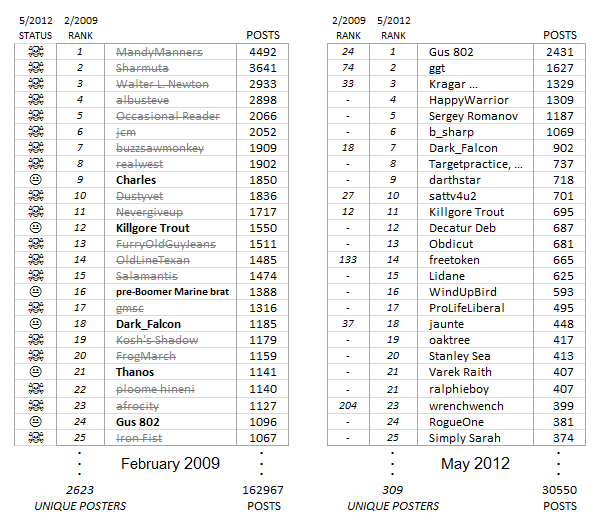 A Rip Van Winkle moment:
In a roundup of the Shooting of Michael Brown story, someone at Salon, Aug 2014, thinks LGF is "conservative-leaning"!
After feedback, they changed this to "the website ..."
Of course, "the loony left website ..." would be more accurate.

Once upon a time, LGF would have automatically jumped to the defence of any apostate from Islam. Now they spurn her. This is the end of LGF.


Rifqa Bary explains her fear that she will be killed if she is sent back to her family.
The new, left-wing LGF doesn't believe her.
Search for more. 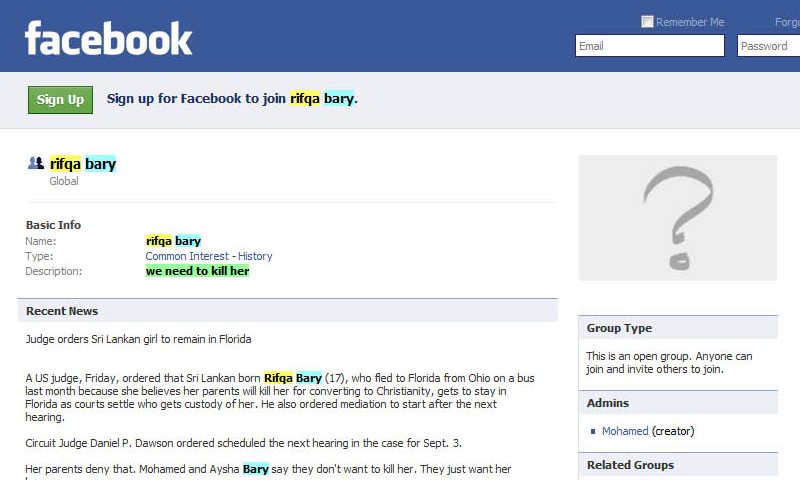 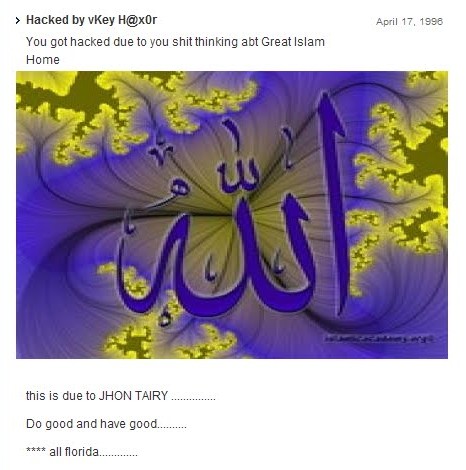 Graphing the tags used on LGF posts vividly shows how the subject matter of the blog changed.
Graph from here.
Here we see how a once great anti-jihad blog stopped covering the jihad at all. 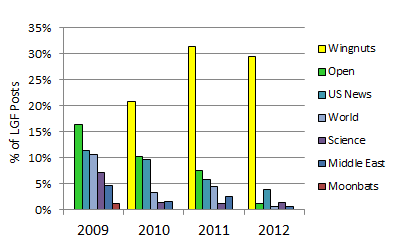 Far-left blogger Charles Johnson now describes the US Marines as far-right and "bloodthirsty".
A tweet war started between Johnson and John Nolte over the video of marines urinating on dead Taliban, Jan 2012. Loony left Johnson is shocked that people on the right are not appalled by this. (I am also unappalled.)
It ended in this revealing tweet by Johnson on 14 Jan 2012. 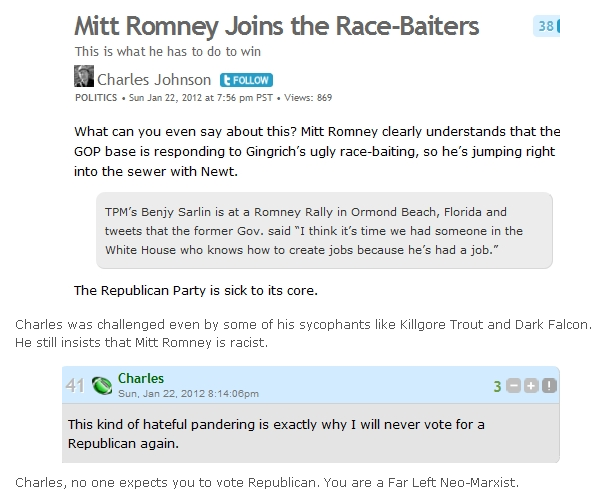 Johnson, Jan 2012, calls anyone who criticises Obama a racist, and pretends that some "centrists" exist who might listen to him.
But no such people exist.
No one is interested in what a far-left loony has to say about the right.
The Diary of Daedalus gives most people's response.

Charles Johnson has a hilarious history with Oliver Willis of the loony left Media Matters for America. 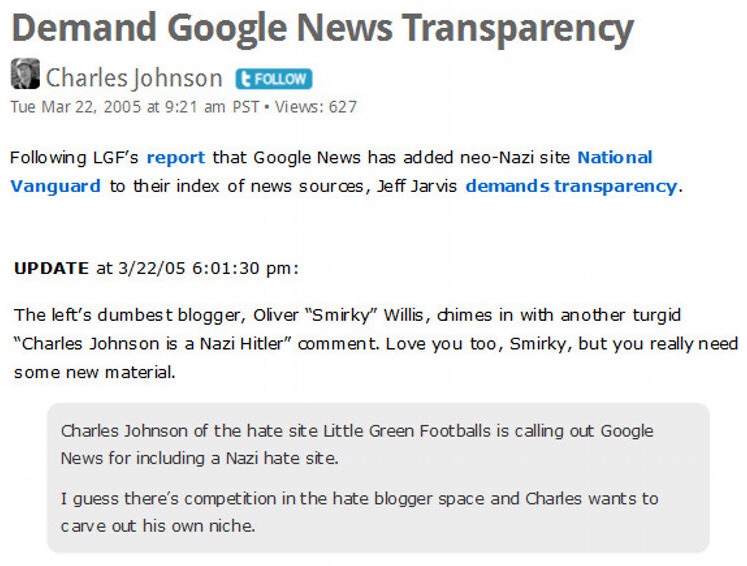 2005: Willis calls Johnson a Nazi.
Johnson calls Willis a dumbass leftist.
(Thanks to Liz_Ardoid for capture.)

2012: Johnson has himself become a dumbass leftist.
But it's still not enough for Willis!
Oliver Willis still calls him a racist in this tweet of 12 Mar 2012.
Everyone hates Charles Johnson!

LGF is becoming friendly to Islamism 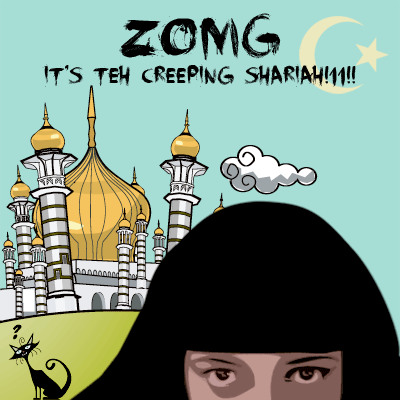 The Muslim anti-anti-Islamist "CuriousLurker" is typical of the anti-counterjihad posters on the useless site LGF these days.
Diary of Daedalus calls her "Furious Burka".

People who defend the Muslim Brotherhood are now welcome on LGF. Shameful. 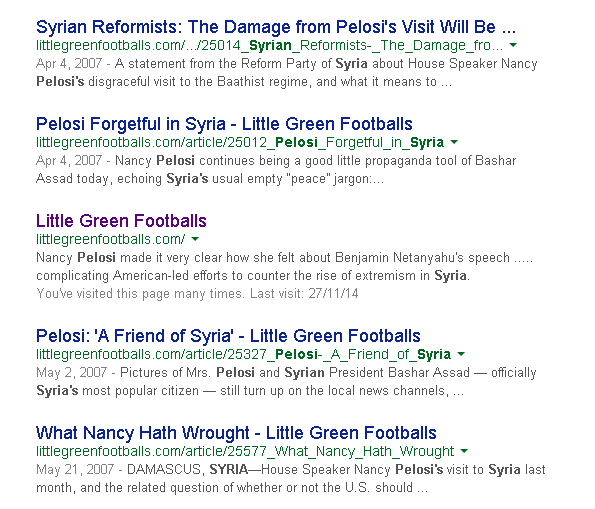 A search in 2015 on LGF for "Pelosi Syria" reveals the changing Charles Johnson.
In 2007 he understood exactly what Nancy Pelosi's disgusting trip to Syria meant.
But what's that in the modern search results?
Yes, it's some modern leftist crap like this March 2015 post: "Nancy Pelosi Slams Netanyahu's "Insult" to the US".
LGF is now going anti-Israel and pro-Pelosi. 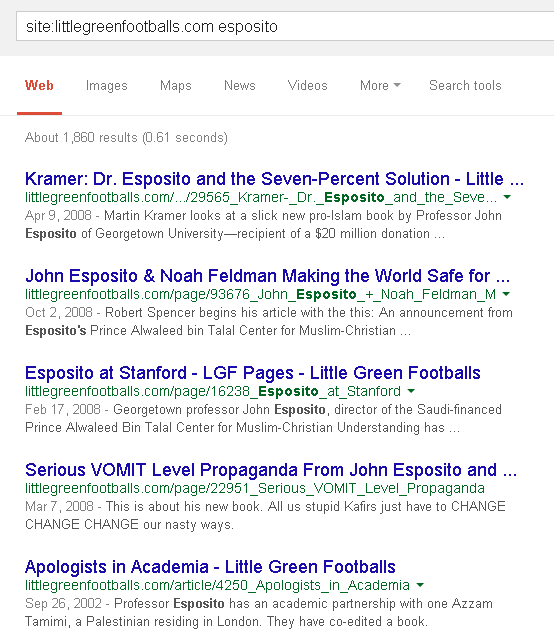 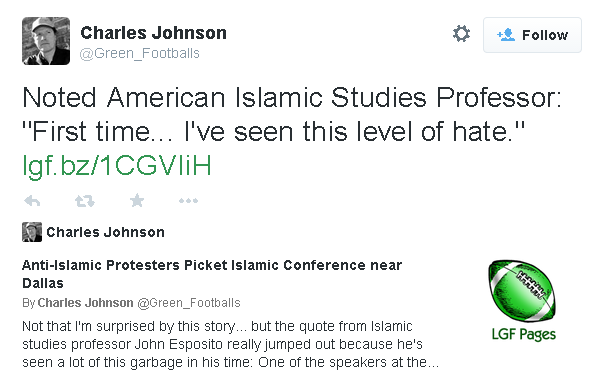 Leftists react uncomfortably to Islamic violence. They make jokes. They attack the people who point out Islamic violence as "bigots". And so on. Johnson is now this kind of person.

When it emerged that the Woolwich jihadist beheader of May 2013 was a long-time associate of Anjem Choudary, no normal person was surprised that the terrorist was linked to this enemy hate preacher.
But Charles Johnson, 23 May 2013, reacts by attempting to defend Anjem Choudary.
What's next in this continuing mental decline? Some qualified support for jihad "resistance"? Ultimate conversion to Islam?

Once a leading counter-jihadist, Charles Johnson now cracks jokes at the terrifying advance of ISIS, June 2014.
To brain-dead leftists, "jihad" and "caliphate" are just silly words the American right uses.
What is amazing about Johnson is that he used to understand the reality. And now he is like this.

Johnson on 26 Sept 2014 and 27 Sept 2014 and 27 Sept 2014 says the Oklahoma Islamic beheading was just "a workplace murder".
His tiny group of left-wing followers applauds.
He writes a post about it, calling everyone "bigots".
"Armaros" laughs at him, and notes that the beheader's Facebook page (and search) was even more jihadi than the social media pages of the Boston bombers. 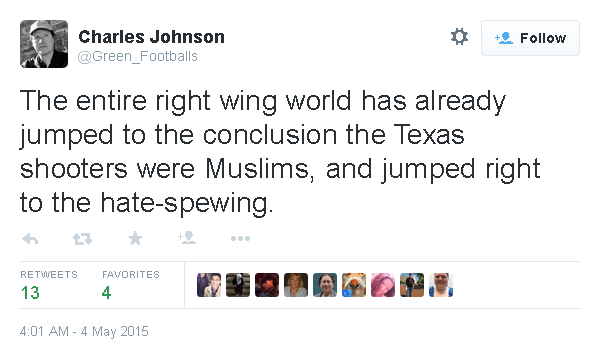 Left-wing nutcase Charles Johnson, 4 May 2015, complains about people linking the Texas Muhammed cartoons attack to Islam.
He's like The Onion. 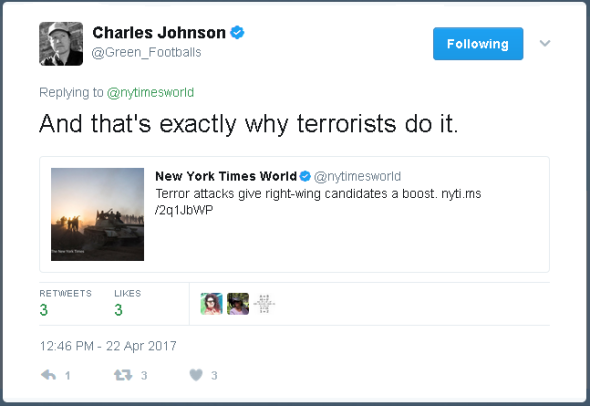 I swear this guy used to understand why jihadis kill infidels.
But the new Charles Johnson, Apr 2017, has got new, left-wing theories for why jihad happens. 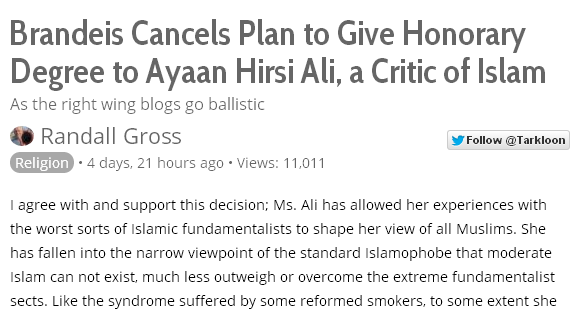 Black, female, feminist, classic liberal, pro-gay, ex-Muslim critic of Islam Ayaan Hirsi Ali was in the running for an LGF award as recently as 2008.
Now the new, insane LGF, in Apr 2014, has disgusting posts attacking Ayaan Hirsi Ali (above).
And Charles Johnson promotes them. 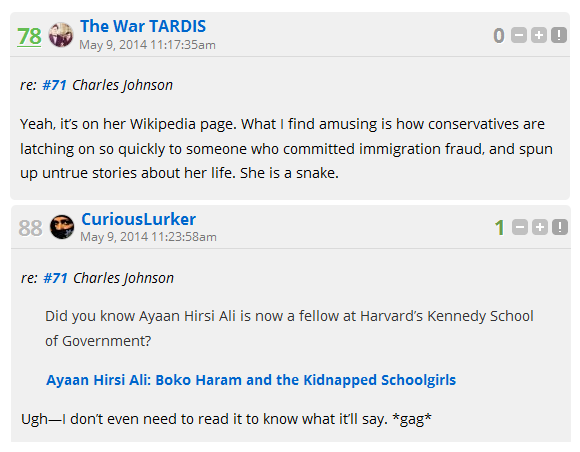 LGF is now a cesspit where people attack the heroine Ayaan Hirsi Ali.
Thanks to DoD for reporting from this hole.

LGF is friends with Mo Ansar

LGF's friendship with Mo Ansar of the Muslim Council of Britain is a dramatic sign of LGF's decline.

The old LGF would never have gone near this person. 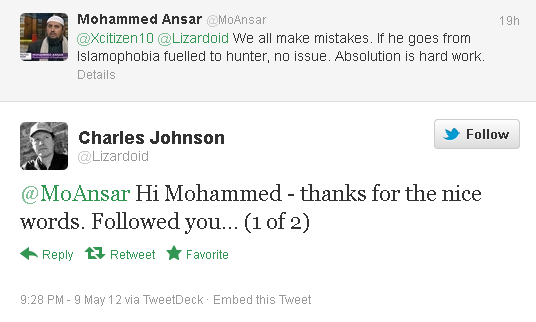 Charles Johnson, 9 May 2012, is now friends with Imam Mohammed Ansar.

Since he reads nothing except leftist drivel now, Johnson will become anti-Israel. It is inevitable. 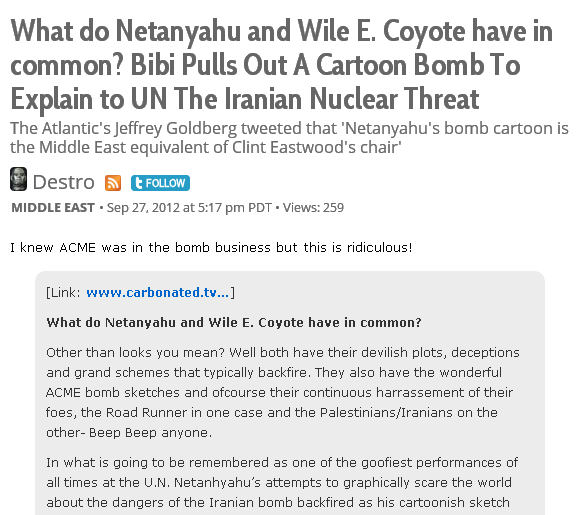 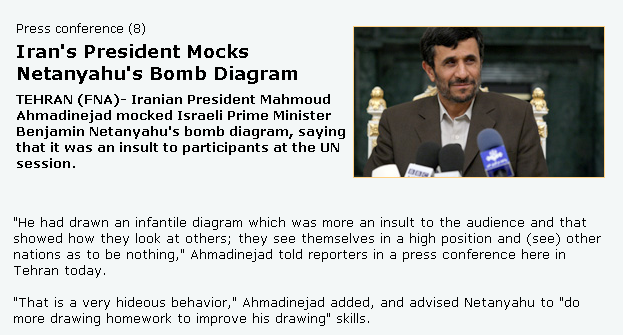 Left-wing moron argues that if only the settlements contained different types of Jews, the jihad would be OK with them.
From here.
How the old LGF would have laughed at this fool!

A quick Google check in 2020 shows that LGF has not written about jihad in 7 years.

"I am always surprised when someone sends me a link from the green swamp. No one reads this boil on the ass of the blogosphere anymore".
- Pamela Geller, 5 Feb 2012, on the car wreck of Charles Johnson and Little Green Footballs.

"Nominees for The 2013 LGF Awards were difficult to select, as Little Green Footballs, once a bright beacon of sentience in a disturbed world, is now a dim yellow porch light that even the moths make fun of."
- The Diary of Daedalus, 20 Jan 2014, on how this may be running out of steam. Few people now remember when LGF was good.