I hope we can agree on the following:

And I hope we can agree: 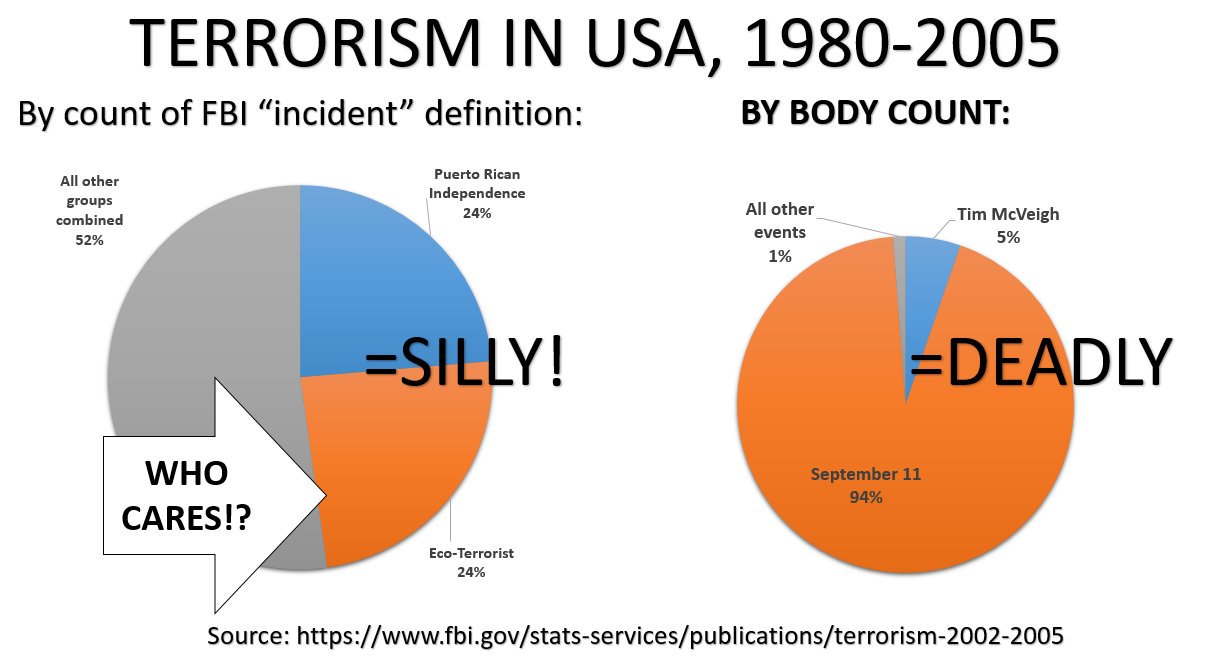 Counting number of terror incidents is not very productive. There are a large number of incidents - left-wing, right-wing, Islamic, eco-terror, nationalist and other - but few cause deaths.
Counting by deaths shows Islamic terror completely dominating the stats for the USA in 1980-2005.
Graphic from here. See discussion. 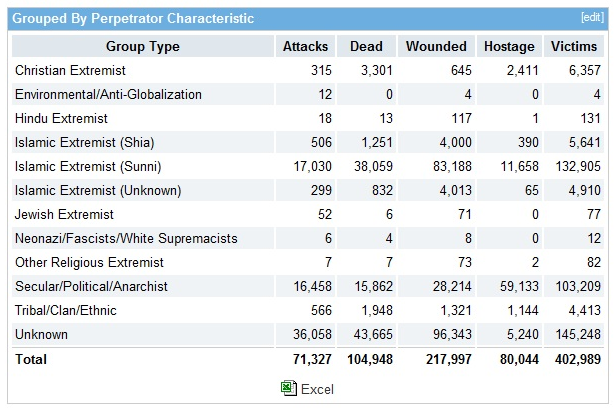 National Counterterrorism Center used to track terrorism worldwide.
Here is a view of their stats for 2001 to 2010 from their Worldwide Incidents Tracking System.
Notice how incredibly violent Islam is.

The "See Something, Say Something" video of 2011, from the Department of Homeland Security, urges Americans to report suspicious behaviour.
But in this video, almost every suspicious person is a regular-looking white American.
Yes, terror by white people (both left-wing and right-wing) does exist. But did political correctness - not public safety - dictate the making of this video?

Right-wing terror has been on a worrying increase since 2008. Attacks are usually by loners with no allies, not (thankfully) organised groups. But the trend is increasing and is very worrying.

Here is a list of right-wing terror attacks since 1990.

If you can suggest any more right-wing terror attacks, tell me here.

Hate crimes in the US

Apart from terrorism, who suffers from smaller-scale hate crimes? 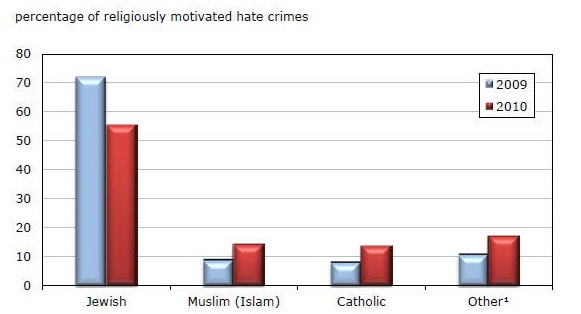 Right & Left Violence: Timeline, by leftist Greg Correll, 10 Jan 2011, claims to compare left and right violence in the US since 1990.

It has many problems:

Attacks assigned to the "right"

The left often jumps to assign various killers to the "right", and sometimes combines this with a call for a clampdown on right-wing speech.


The Liberal Media's History of Falsely Blaming Conservatives for Massacres by Stephen Gutowski. 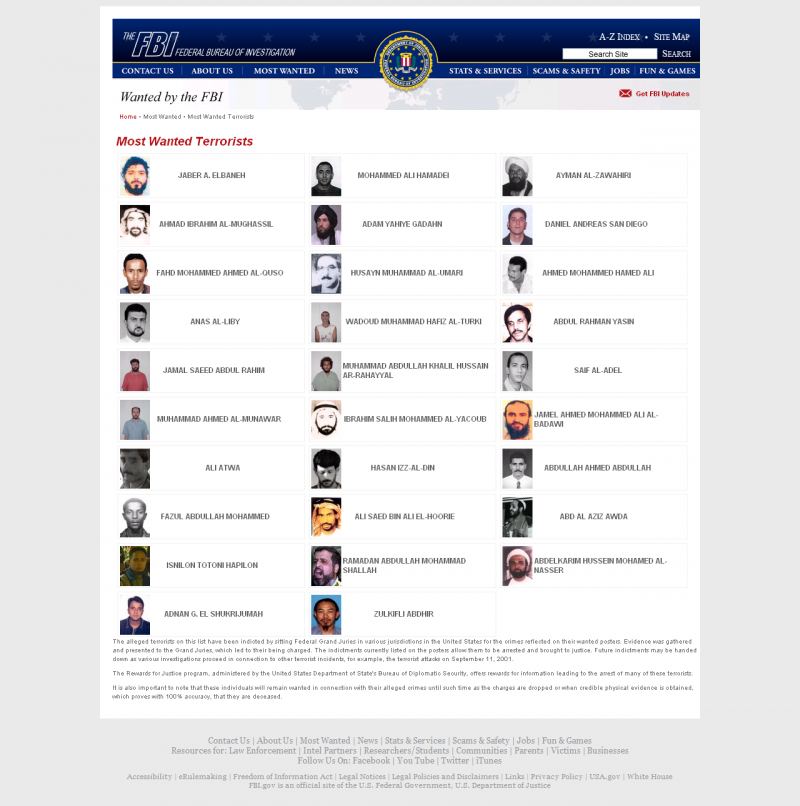 FBI Most Wanted Terrorists, as at June 2011, eloquently shows how all religions are not the same.
There is one animal rights terrorist. Everyone else is Muslim. There are no Christian or Jewish terrorists on the list at this time.
See larger.

One of the worst examples of the left blaming the wrong people was when a Jew-hating neo-Nazi carried out a terrorist attack on Sikhs in Wisconsin in 2012.

Leftists blamed anyone and everyone on the right, including more or less the entire GOP. They even blamed Jew-loving, anti-jihad, Israel supporters, who a neo-Nazi skinhead is hardly likely to be reading! 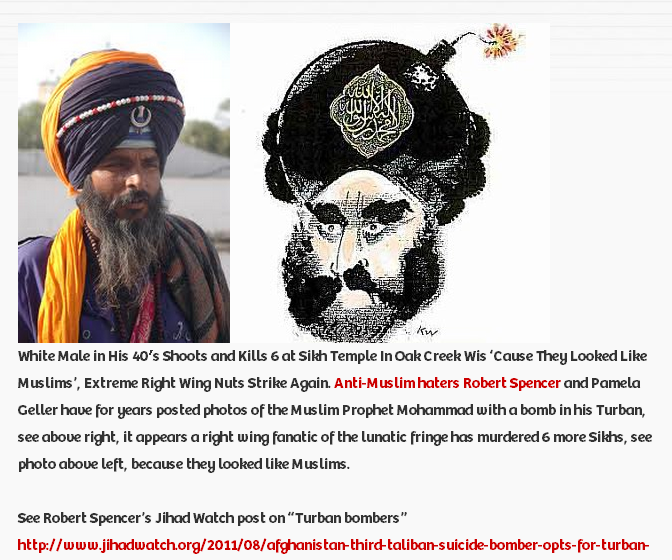 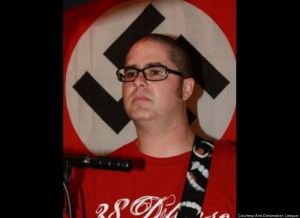 The Sikh temple shooter.
Obviously an avid reader of the Jew-loving, pro-Israel Robert Spencer.
Obviously!
So obvious that we can go ahead and call for Spencer's arrest.

Why not blame skinhead culture?

It is obvious who to blame for the Sikh temple shooting, apart from the shooter. We should blame skinhead culture.

But that is too obvious. The left, for some reason, prefers to blame its normal political opponents - regular, peaceful, parliamentary democrats. Palin was blamed for Tucson. Sarkozy was blamed for Toulouse. And obviously Michelle Bachmann - or someone - is to blame for this shooting.

The sinister Juan Cole is an expert at blaming people he doesn't like for things they have nothing to do with.

Feb 2015: Australian Muslim "terrorism expert" Anne Azza Aly (yes, the same person) declares that the Chapel Hill shooting of Muslims is terrorism. (The police say it is not.)