Islamism - The problem - What is wrong with the Islamic world?

The problem - What is wrong with the Islamic world?

After 9/11, when thousands of American innocents were killed by Islamic extremists for no reason, the central question is not: "Why do they hate us?".

The central question is not: "What is wrong with American foreign policy?"

The central question is: What is wrong with the Islamic world, and how will it reform?

The basic problem is very clear. It is that millions of people in the Islamic world do not believe in free speech, freedom of religion, democracy, a secular state, free enterprise and human rights. Millions of Muslims also have a hatred for Israel and America that has no rational basis.

"A warning from history". Copy here.
Iran and Afghanistan in the 1960s and 1970s, before sharia came.
People think that sharia is the natural state of these countries. But of course, it is merely the thing that is currently winning, having defeated the liberals, for now.
The lessons of the video are:

If you want a 5 minute summary of what is wrong with the Islamic world, here it is.

Here is their ranking for the main belt of Islamic countries: 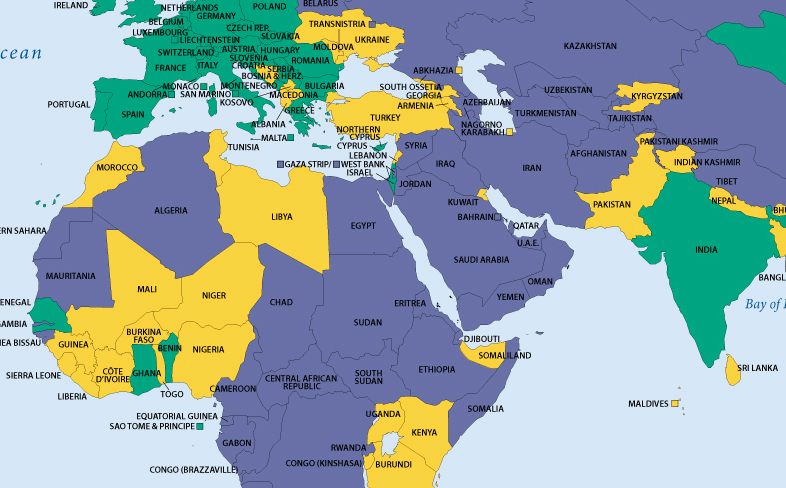 
And the entire world:


That's it, in a nutshell. That's the problem.

The root cause of Islamist terror

One of the most depressing aspects of the modern crisis has been how little soul-searching there has been in Islam since 9/11. The West has done far more soul-searching, even though it is not to blame.

There has been depressingly little discussion among Muslims of what is wrong with the Islamic world to have: (a) produced these evil butchers (and thousands more like them), and: (b) to have so many poor and unfree and violent countries. Apart from a couple of days pause, there has been just the same old Islamic arrogance, as if it's the West that has to apologise for being rich and free.

There are a few brave voices in the Muslim world, but so few it is depressing.

A lot of Muslims "against terrorism" turn out to be anything but. You have to examine each case. 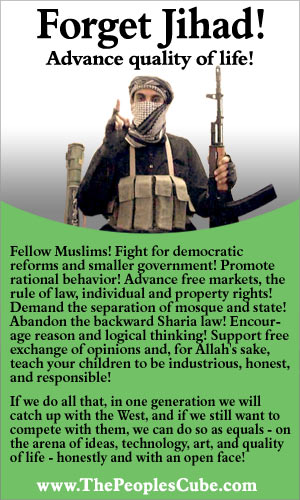 It's a joke, but actually, it's serious too.
Imagine, for just one second, that the above could happen.
Imagine what a future of freedom and prosperity there would be for the Islamic world.
Will it take centuries before the Islamic world gets sense, and becomes rich and free like us, or will it only take decades?
From The People's Cube.

Maryam Namazie, an atheist, ex-Muslim, activist from Iran, deserves a category all of her own. She is anti-jihad and anti-Israel. That makes no sense. Very few people in the world are in that category. 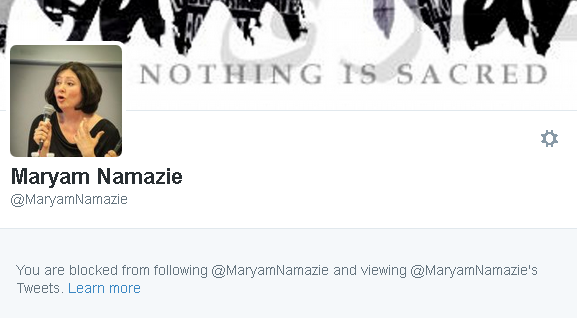 Maryam Namazie blocked me on Twitter for unknown crimes (basically, not being left-wing). She later unblocked me.
She does not really like any allies against sharia unless they are far left.
And since most of the far left are pro-sharia, it is a daft strategy. It's a shame she cannot be more broad-minded.
When she had me blocked, I said: "She is admirable in many ways. She's the only person who blocks me that I would say that about."

Islam, reformation, and freedom of religion 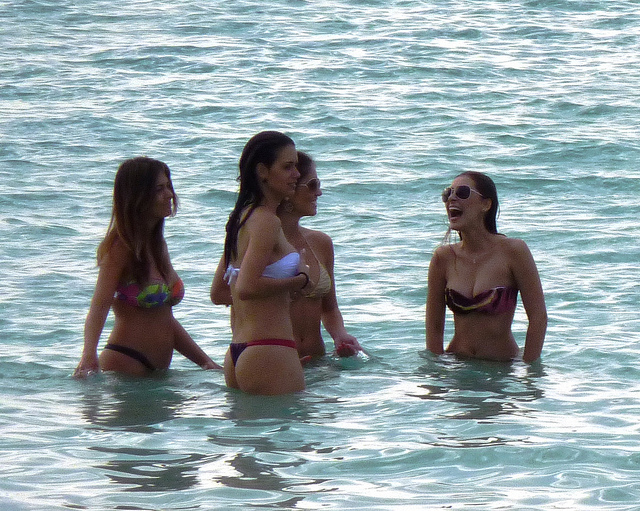 Western women in the Islamic world.
There are parts of the Islamic world that tolerate - for the sake of western money - westerners behaving in ways that the locals would never be allowed to.
These women are bringing the dress codes of the 1950s-1960s sexual revolution - an important part of western culture - to the beach in Abu Dhabi.
Photo 2010. From here.
Let us hope that decadent western culture destroys traditional Arab Islamic culture over the next few decades. Let us hope that their young people are seduced by the glamour of the West. Let us hope that their traditional ways are lost forever, and the vulgar secular consumerism of the West triumphs.
I am not kidding. I really do hope this will happen.

The solution - The Islamic world must change. America and the West must assert themselves.

The Middle East was once the centre of human civilization

It is sad, given its current state, to think that the Middle East was once the greatest place on earth - the centre of human civilization, the heart of all human knowledge. Will it ever be a great place again? Only if it changes its entire present culture, which may not involve abandoning Islam, but will certainly involve becoming more secular. 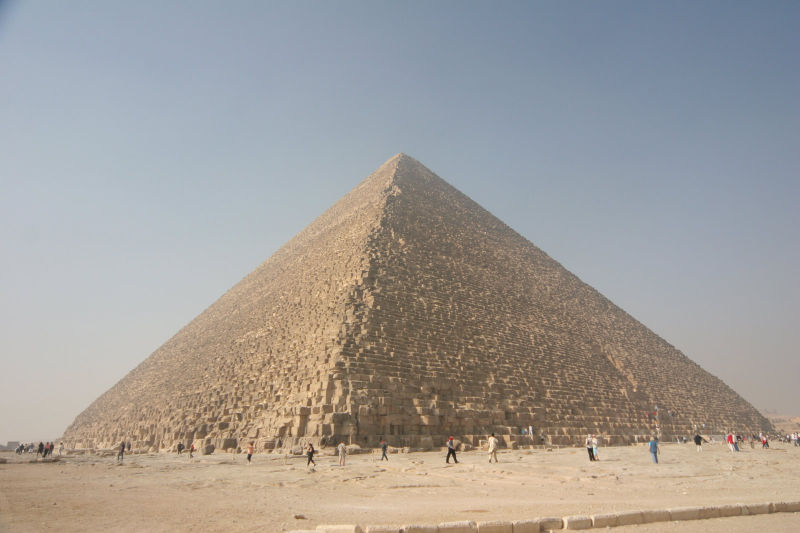 Egypt's lost glory: Ancient Egypt was the greatest country on earth, at the vanguard of humanity's glorious civilization. And then the torch passed to other places, and Egyptians adopted ideas of little importance to human progress. It is sad to consider Egypt now, compared with what it once was. Even the discovery of Egypt's glorious past was done by westerners - not by Egyptians, who were largely uninterested in the topic. In fact, in 1196 Egyptian Muslims vandalised the Pyramids and tried to destroy them, and it was recorded that in 1378 Egyptian Muslims vandalised the Sphinx.

Let us hope that some day Egypt and other Middle Eastern countries are again at the frontier of human thought. For that ever to happen, they must change, and abandon the culture of their ancestors.

"Helping construct a stable democracy after decades of dictatorship is a massive undertaking. Yet we have a great advantage. Whenever people are given a choice in the matter, they prefer lives of freedom to lives of fear. Our enemies in Iraq are good at filling hospitals, but they do not build any. They can incite men to murder and suicide, but they cannot inspire men to live, and hope, and add to the progress of their country. The terrorists' only influence is violence, and their only agenda is death. Our agenda, in contrast, is freedom and independence, security and prosperity for the Iraqi people. ... Our coalition has a clear goal, understood by all - to see the Iraqi people in charge of Iraq for the first time in generations.
Like every nation that has made the journey to democracy, Iraqis will raise up a government that reflects their own culture and values. I sent American troops to Iraq to defend our security, not to stay as an occupying power. I sent American troops to Iraq to make its people free, not to make them American. Iraqis will write their own history, and find their own way. As they do, Iraqis can be certain, a free Iraq will always have a friend in the United States of America.
We believe that when all Middle Eastern peoples are finally allowed to live and think and work and worship as free men and women, they will reclaim the greatness of their own heritage. And when that day comes, the bitterness and burning hatreds that feed terrorism will fade and die away. America and all the world will be safer when hope has returned to the Middle East."
- George W. Bush, May 2004, on Iraq.
Such incredible generosity in saying "Iraq will always have a friend in the United States of America" - after Iraq had threatened the USA and its allies for so many years. America is fast to forgive, once a country changes. If the Arab Middle East can change and adopt modern ideas of freedom, everyone there can be free, rich allies of America. Heaven on earth is there for the taking.


"Here is something I have learned the hard way, but which a lot of well-meaning people in the West have a hard time accepting: All human beings are equal, but all cultures and religions are not. ... It is part of Muslim culture to oppress women and part of all tribal cultures to institutionalize patronage, nepotism and corruption. The culture of the Western Enlightenment is better. ... Instead of affirming the value of tribal lifestyles, people in the West - activists, thinkers, government officials - should be working to dismantle them."
- Ayaan Hirsi Ali, Nomad (2010).

"The Shariah law is the best justice, not the Western democracy which gives us bad regimes like Assad's."
- A Syrian jihadist bastard called Abu Omar al-Shesheni comically says that Assad's brutal, Oriental dictatorship was somehow "Western democracy", which is now discredited, and Islamism is the answer.

"People, you have tried secular rulings (republic, Baathist, Safavids) and it pained you. Now is time for an Islamic state."
- Maniac jihadists ISIS take over Mosul, June 2014, and comically claim that secular democracy has been tried and is now discredited.

Abu Omar al-Shesheni and ISIS sum up what is wrong with the Islamic world. They will try anything - Islamism, Shariah, theocracy, caliphate, tribalism, pan-Arabism, Marxism, communism, fascism, strongman dictatorship, royal family dictatorship. Anything, anything except liberal democracy.