The Egyptian Revolution, 2011 on

In the Cold War, we knew that the Soviet Bloc dissidents believed in freedom. We knew they would set up liberal democracies when they won.

This war is different. There are so few voices in the Islamic Middle East calling for religious freedom (e.g. for apostates), sexual freedom (e.g. for gays) or a pro-freedom foreign policy (e.g. pro-Israel). The Islamic street may want to get rid of the dictator, but it rarely seems to want freedom.

In Egypt, Mubarak was a vile dictator who denied human rights. But, when he was gone, Egyptians voted to install an Islamist tyranny instead. This was then overthrown in favour of a new tyranny.

The problem is not just a dictator. The problem is the Egyptian people. After the failures of revolutions and hopes for change in Iran, Lebanon, Iraq and Afghanistan, it's hard to have any optimism about the Arab or Islamic street. Not enough of them want freedom. They want other things.


1989 in Eastern Europe: We knew these people wanted to be free. 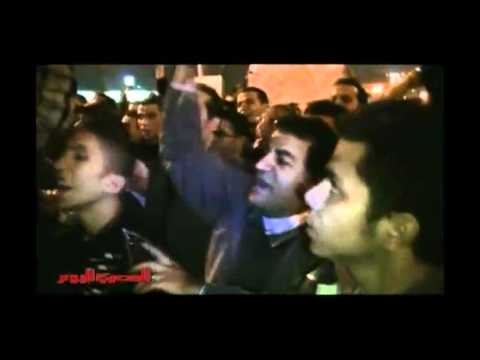 A sad video of 2011-12 in Egypt. Sad because optimistic.
People said it was 1989, but it was not 1989.
Despite the promises, it turns out most Egyptians just want a different sort of oppression.

Pessimism - All the jihad lovers and Israel haters support the revolution

There was a cloud over the Egyptian Revolution right from the start, as it became clear that all the jihad supporters and Israel haters thought the revolution was great. 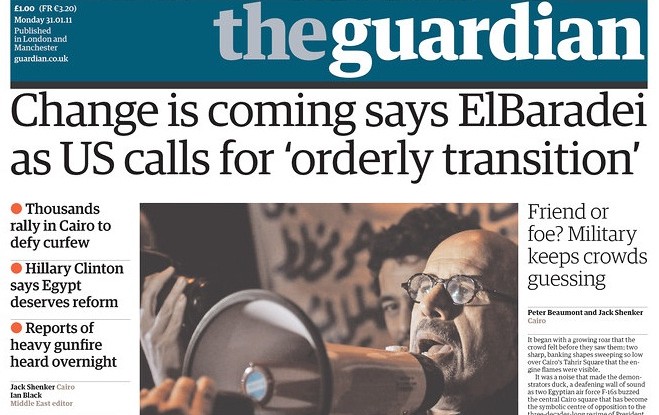 The jihad-supporting Guardian is excited. 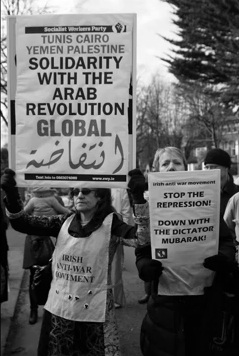 The jihad-supporting Irish Anti War Movement supports the Egyptian protests.
From video of protest at the Egyptian Embassy in Dublin, 29 Jan 2011.

Jihad supporter Richard Boyd Barrett supports the Egyptian protests.
Video of protest at the Egyptian Embassy in Dublin, 31 Jan 2011.
He attacks the US and Israel.
Oddly, he says dictators' embassies should have no place in Ireland. I agree! Will he then join with me in calling for the closure of the embassies of China, Russia, Egypt, Pakistan, Saudi Arabia, Cuba, Iran and the Palestinian Authority?

Many of the revolutionaries believe in jihad and sharia, not freedom


Egyptian protesters say they want to destroy Israel.
CNN, Jan 2011.
Mubarak would be better than the people in this video.

Many "Arab Spring" revolutionaries seem at first to be secular western liberals. But scratch the surface and you often find just a different type of jihad lover. I have even been fooled by these kind of people myself. 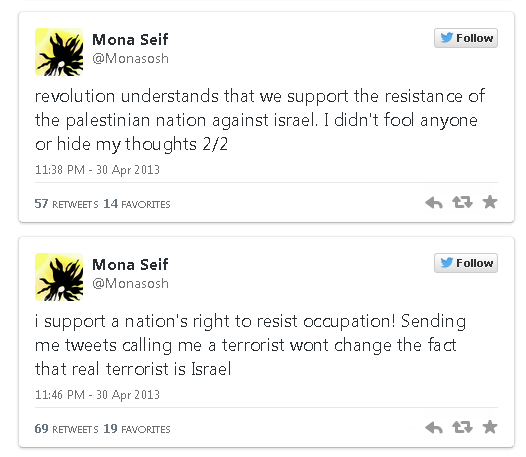 Mona Seif, 30 Apr 2013. calls for jihad against Israel.
Search for "Monasosh Israel" to see more hatred of Israel from her.

Alaa Abd El-Fattah, 15 Nov 2012, calls for jihad against Israel.
He also wants to bring down America.
Search for "Alaa Israel" to see more hatred of Israel from him.
I very much regret calling for the release of this guy from prison. 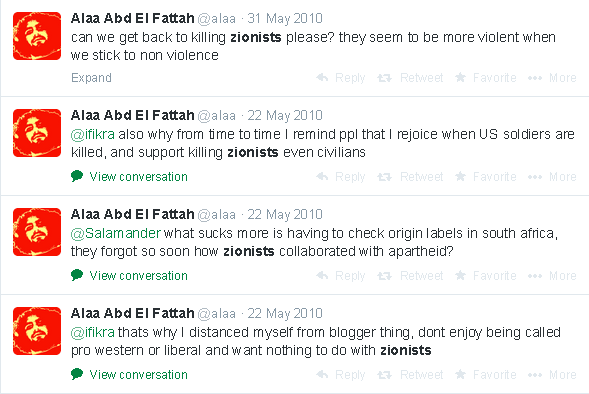 Endless jihadi filth in his timeline.
This is a search for "zionists".
He celebrates the killing of Americans and Israelis. He denies being a liberal.
He is no better than the Muslim Brotherhood.

I am now blocked by Alaa Abd El-Fattah. 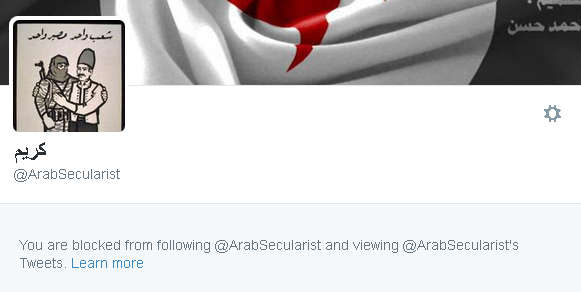 A similar example of a "secular" Arab turning out to be useless:
Atheist "ArabSecularist" says he hates Israel and he is a fan of Hezbollah: "I have a pic. of Nasrallah on my Christmas tree."
I tell him "You sound insane" and he blocks me.

Can you imagine in a page on the 1989 revolutions in Eastern Europe, a section called "Rape of western reporters"? It says it all, really, about how crap this revolution is.

Violence against Christians in 2011

A new dark ages begins for Egypt.
The darkness descends on Egypt:
The May 2012 launch of the Muslim Brotherhood candidate Muhammad Mursi's campaign for President.
The speaker declares that Mursi will liberate Gaza (I thought Gaza was already "liberated" by the Islamist enemy) and restore a united Arab state with Jerusalem as its capital.
From MEMRI. See transcript. "Banish the sleep from the eyes of all Jews. Come on, you lovers of martyrdom, you are all Hamas. Forget about the whole world, forget about all the conferences. Brandish your weapons ... Say your prayers ..."

Israel destroys the Egyptian air force in one morning in the Six Day War in 1967.
What Israel may have to do again if Egypt does not choose a sensible path.
Ignore the nonsense computer-generated subtitles.
See also photos part 1 and part 2.

Violence against Christians in 2011-13

The Muslim Brotherhood winning the Nov 2011 election was the start of an even worse era for Christians than the one before. 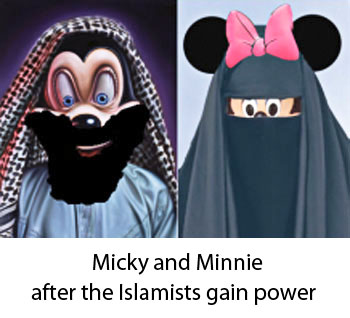 Egypt prosecutes a liberal activist Christian for tweeting this picture, Jan 2012.
See the tweet.
He is charged with "defaming religion" or "ridiculing Islamic icons and attire" or some such nonsense.
Remind me what was the point of the Egyptian revolution again?

The West did not see the Islamist Winter coming

The people of Egypt voted for a Muslim Brotherhood tyranny.

Many in the West never saw this coming. Thanks to Mahdi Watch for the following examples of western blindness. Martin Kramer has more. 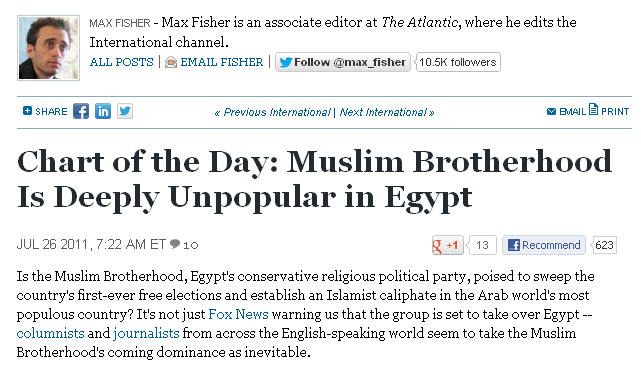 Max Fisher in The Atlantic.
Note the sneer at Fox News - who of course turned out to be right. 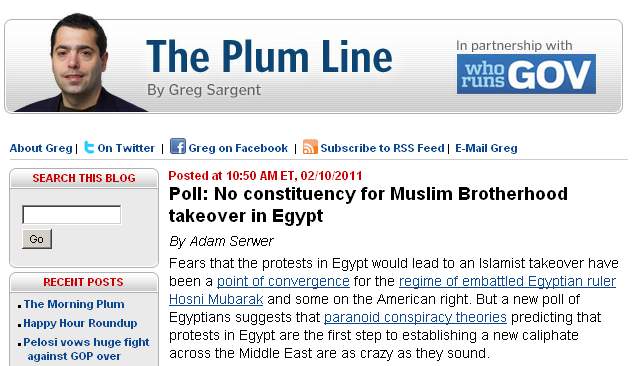 Greg Sargent in The Washington Post.
Greg Sargent previously summed up why I am not a leftist.

From The Daily Caller. 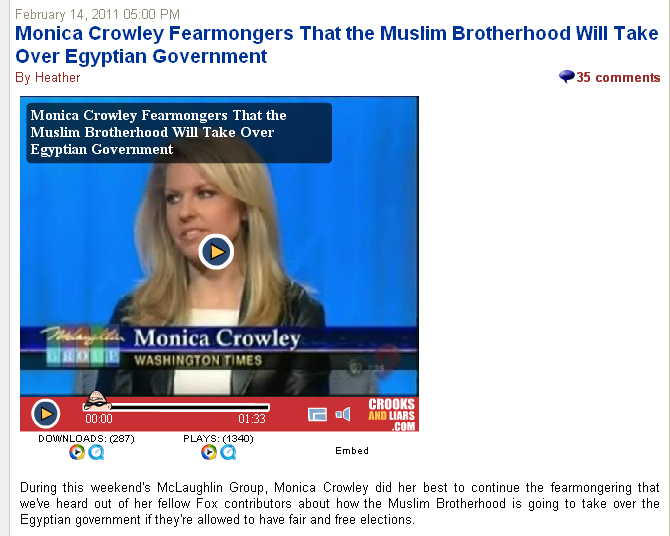 From Crooks and Liars.
The post attacks Fox News - but of course they turned out to be right. 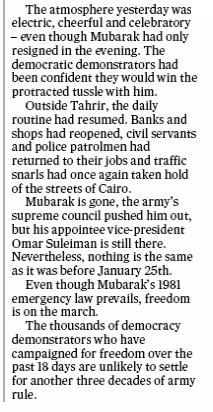 And let's not forget the Irish Times' Middle East correspondent Michael Jansen declaring: "freedom is on the march."
From The Irish Times (and here).

Millions of idiot Egyptians voted in 2011 and 2012 for the Muslim Brotherhood. They voted to enslave their country.

Millions of other Egyptians worked to stop them. In 2013 they got the army to topple the Muslim Brotherhood.

The millions of Egyptians who like the Muslim Brotherhood and have other appalling ideas have not gone away. So heaven knows what comes next. But maybe there is some hope. 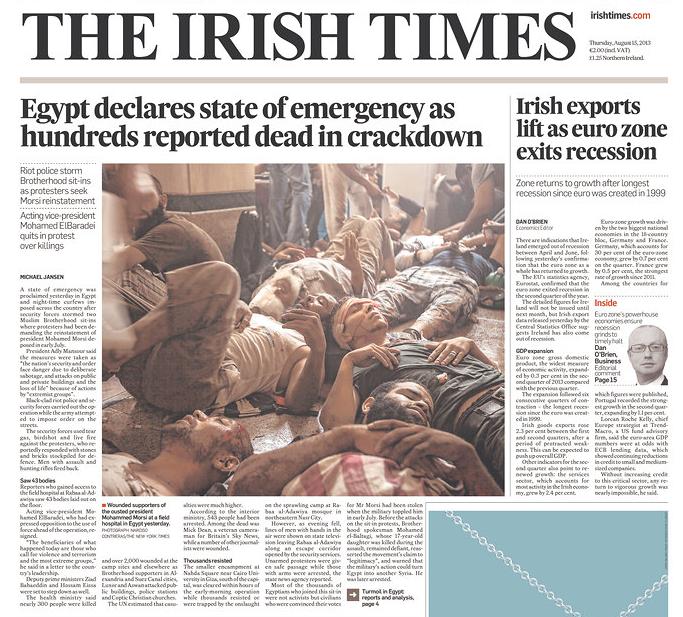 Hundreds of Muslim Brotherhood supporters killed, Aug 2013.
Emotional front page of Irish Times, 15 Aug 2013, wants us to have sympathy for supporters of Islamic fascism.
These "victims" need to get better so they can burn Christian churches. 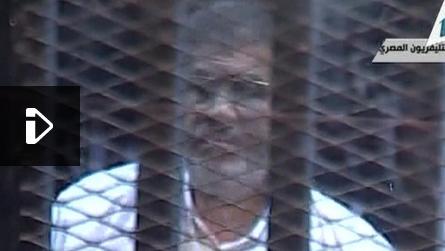 Islamist thug Morsi in prison, Jan 2014.
The new Egyptian regime is not liberal or democratic.
But stopping the Muslim Brotherhood takeover is still like stopping Hitler in Jan 1933 or stopping Lenin in Nov 1917.

Violence against Christians in 2013 on

The Sisi regime is also oppressive

It's great to see the fall of the Muslim Brotherhood. But of course the new Egyptian regime is hardly liberal or democratic. Since most Egyptians believe in oppression, oppression carries on. 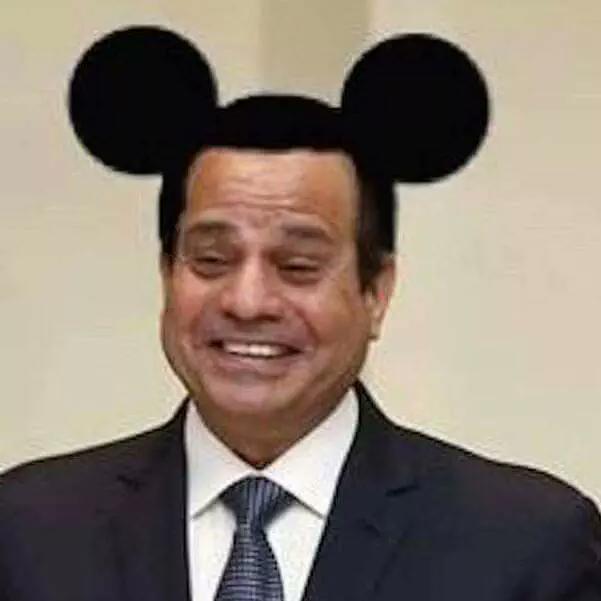 Egyptian Amr Nohan sentenced to 3 years in Oct 2015 for putting this image of President Sisi with Mickey Mouse ears on Facebook.
Remind me the difference between Sisi and the Muslim Brotherhood again?

Egyptian singer Shyma was arrested for this video "Andy Zoroof" in Nov 2017. She could face 3 years in prison for "inciting debauchery".
Remind me the difference between Sisi and the Muslim Brotherhood again?