The left and Israel - Abuse

You need a thick skin to defend Israel online. Here are a few examples. 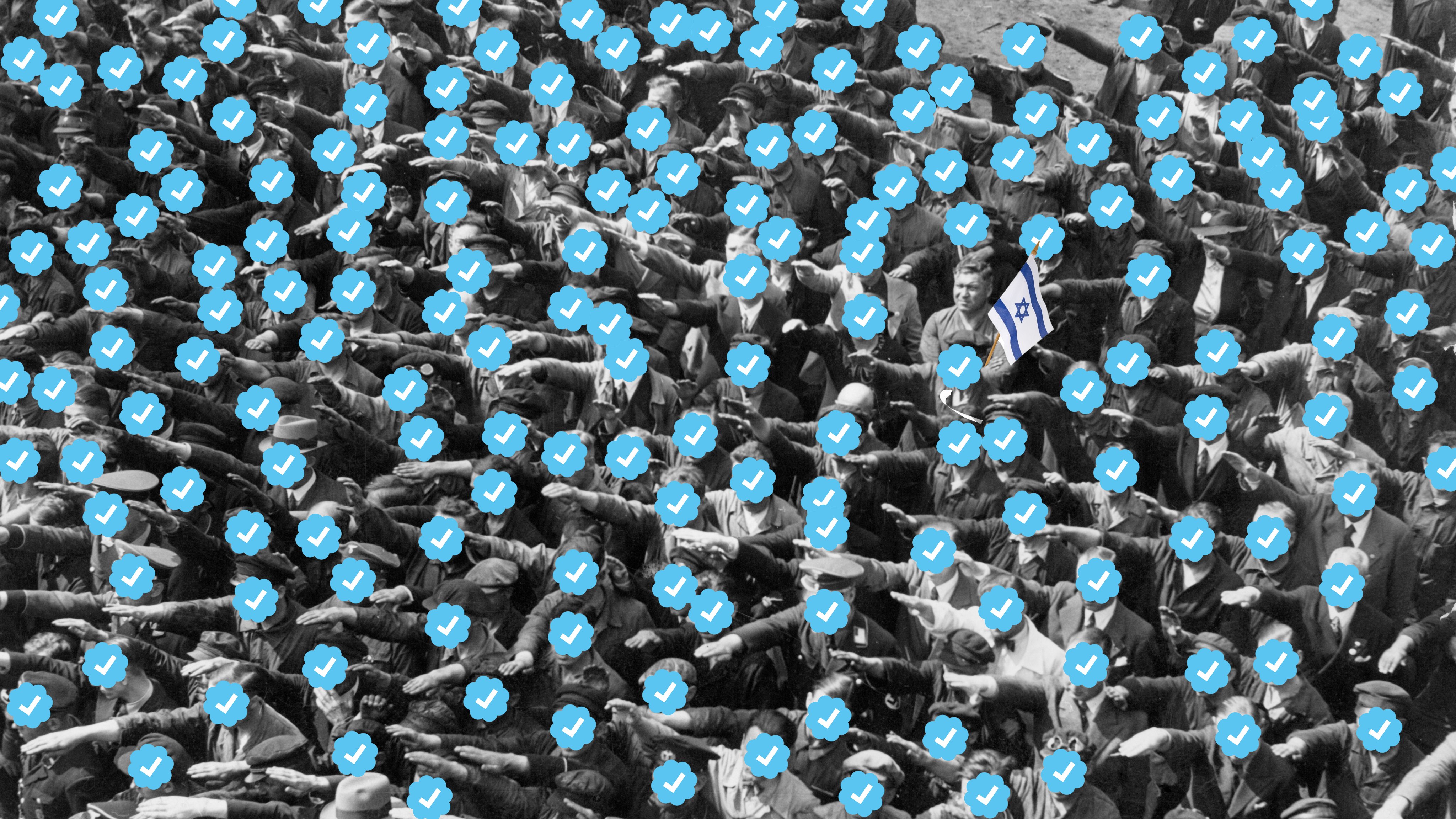 Life online when you are pro-Israel.
From here.
Based on this picture.

Greg Manahan calls me a "racist sack of shit" for defending Israel, 28 Apr 2014.
From this thread. 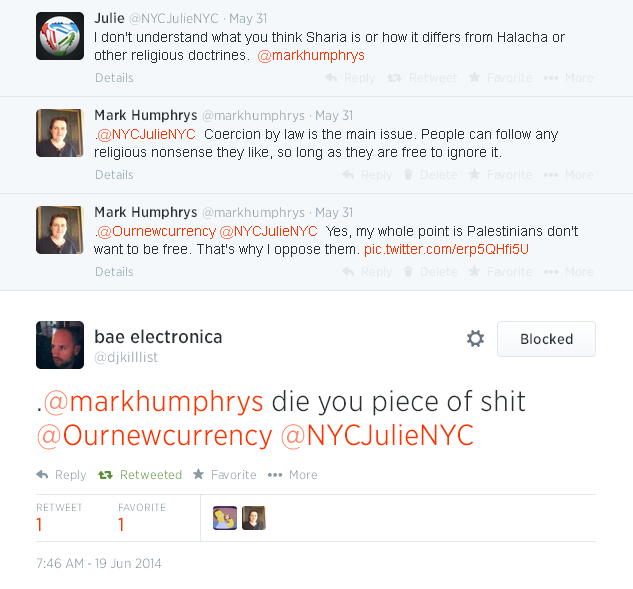 Some typical anti-Israel debate from an American called "djkilllist".
I point out that Palestinians believe in sharia, not freedom.
This makes him furious. He opens his erudite debate on 19 June 2014 with: "die you piece of shit". 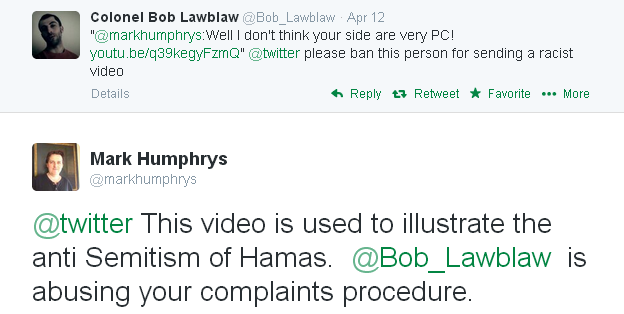 I post a Hamas video, Apr 2014, to show their anti-semitism.
Hamas lover "Bob Lawblaw" is so angry at me criticising Hamas that he tries to get me banned from Twitter.

More abuse from a coward who hides behind a pseudonym.

Irish Israel-hater called "italianirish81" calls me a "kunt" and blocks me for asking him difficult questions about Israeli and Palestinian morality in warfare.
He says he doesn't call me a "kunt" lightly, but I get the impression he says that about every pro-Israel person he meets.

An "anti-Zionist" called "McNeice1989" gets out the anti-semitic tropes.
This guy claimed to be angry about the tragic Israeli mistaken attack on the USS Liberty in 1967.
Of course, he couldn't give a damn about dead American sailors. It was just an excuse to attack Israel. This was shown later in the thread when he refused to condemn the jihadi killing of American troops in Iraq.
He eventually started with personal abuse so I had to block him. 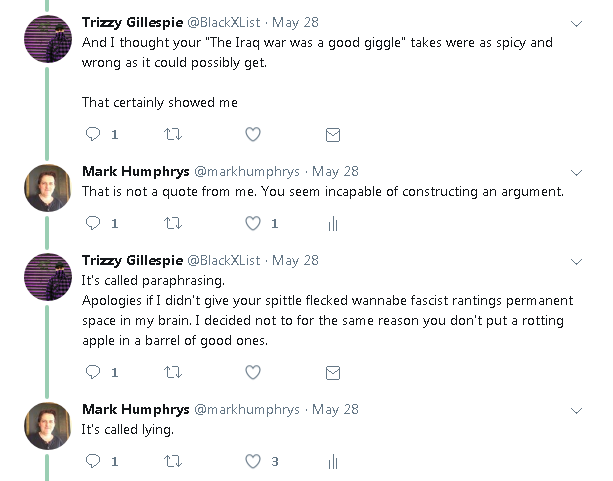 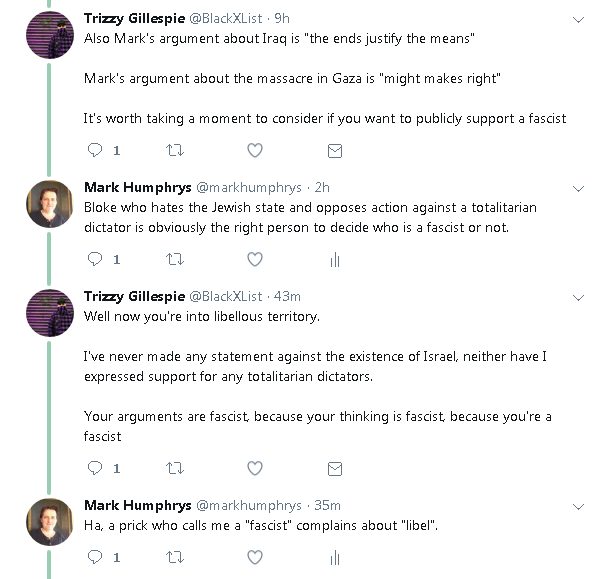 This long thread in May 2018 sums up the lack of self-awareness of the modern leftist.
British leftist Martin Barratt ("BlackXList") attacks me for defending Israel. He starts badly, with a total lie about my opinions. He then repeatedly calls me a "fascist".
When I suggest that people who hate Israel and oppose deposing Saddam are hardly the ideal people to define who is a fascist, he says this is "libel". That's right, after endless libels against me, he starts complaining about libel! What a lack of self-awareness.

Sinead Lunney describes me as an "uneducated baboon racist" for supporting Israel.
See   her   endless   hate-filled   tweets   about Israel.

A traitor to Ireland

A familiar trope is Israel-haters angry with me for being Irish and not supporting Irish and Palestinian terrorism.

In this thread in Nov 2014 we have abusive thug "K_M_C_90" and relentless boring stupid guy "Sammy". (Both anonymous cowards you notice.)
I think I should be paid to talk to people like this! 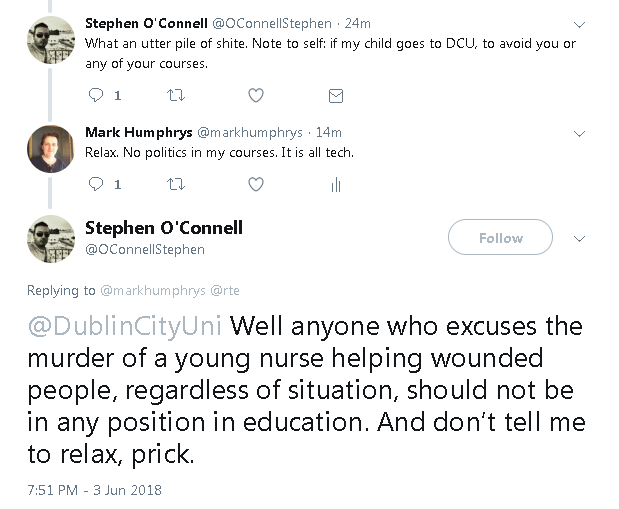 Someone called Stephen O'Connell calls me a "prick", targets my employer, and says I should be sacked, June 2018.
Why? Because I pointed out that Gaza nurse Razan al-Najar, who died in the Gaza border riots, had multiple terrorist flags and posters at her funeral and was probably linked to Fatah terrorism.

I have had a few encounters with Gerry Casey, who is or was an activist with the fanatic anti-Israel group Eirigi. 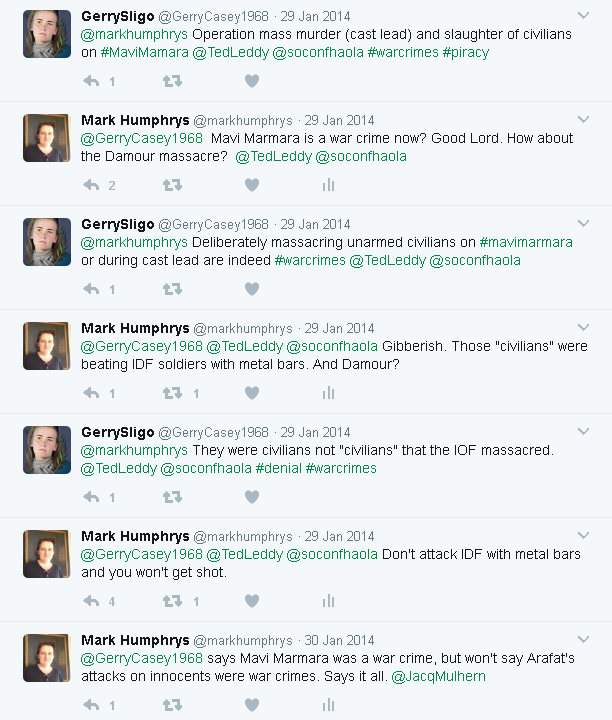 Here in 2014 he claims that the IDF killing of IHH jihadists in the Gaza flotilla clash was a "war crime".
But when asked if Yasser Arafat's killings of innocent civilian women and children in cafes, shops, buses and airplanes were also "war crimes" he goes silent.
By the way, his image is of Rachel Corrie.

He says in March 2017 that I am like a Holocaust denier, because I deny that the Israelis are randomly slaughtering the Palestinians. 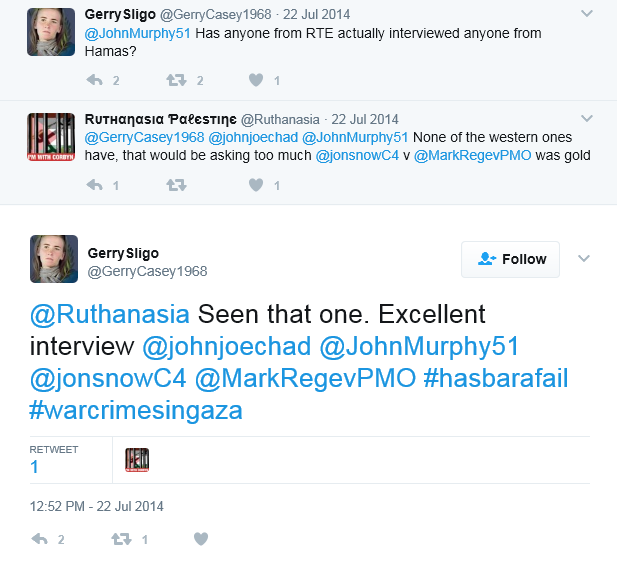 Rather a bad move since I discover he has friendly interactions with one real Holocaust denier ...

And another real Holocaust denier ... 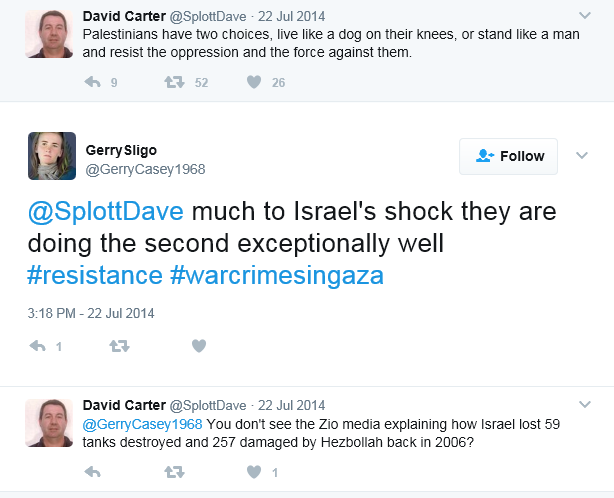 I later discovered he is friendly with a 4th Holocaust denier.

A Holocaust denier and anti-semite.

Irish republican "clintderry" is a Holocaust denier ("Holohoax") who (as is the way) calls modern Israelis/Jews "Nazis". 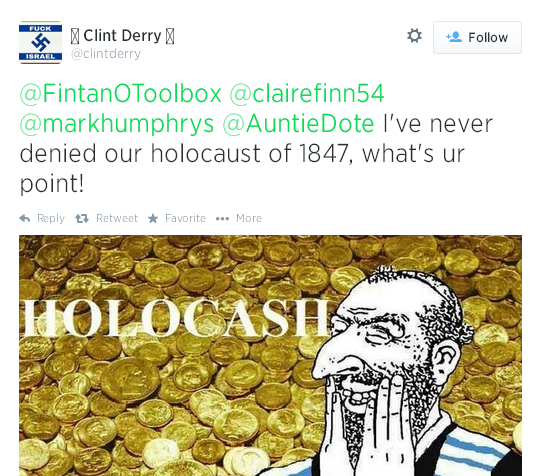 The IRA supported Nazi Germany in WW2.
Irish republican "clintderry" shows they would do it again.
When questioned about whether he denies the Holocaust, he responds with anti-semitism. 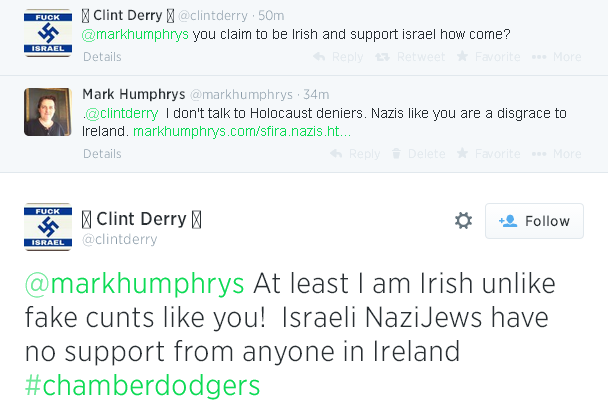 Holocaust denier "clintderry", 15 July 2014, is obsessed with who is of the "correct" race. He is careful to point out he is a "Native Irish Republican". He questions whether I am "really" Irish. He suggests I am a Jew who "dodged" the gas chambers.
Of course the irony is that "clintderry" lives in the UK.
While I live in Ireland, where my grandfather fought in the GPO in 1916, my granduncle was Ireland's first prime minister, my great-grandfather was a member of the First Dail, my great-granduncle founded the Volunteers and died in the Rising, and my great-great-grandfather was a Home Rule MP.
Yes, you read that right! 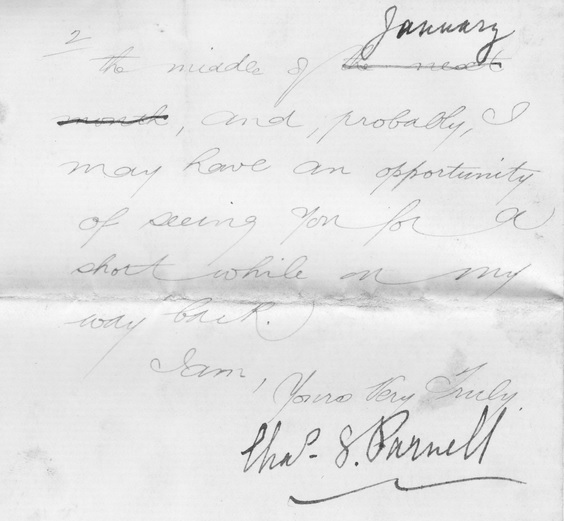 A note from Parnell to my great-great-grandfather (a Home Rule MP) in Dec 1884.
This note and others survive in my family. 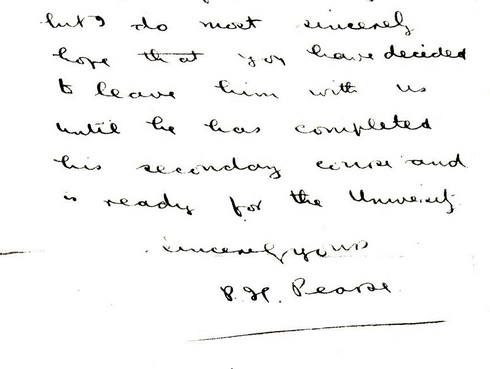 A note from Pearse to my great-grandmother in June 1912.
Her son, my grandfather, was at St.Enda's, and would fight with Pearse in 1916.
This note and others survive in my family.

Holocaust denier "clintderry", 15 July 2014, tweets my photo, and explains how "Jew lovers" (and Jews) would be treated in his ideal Ireland. 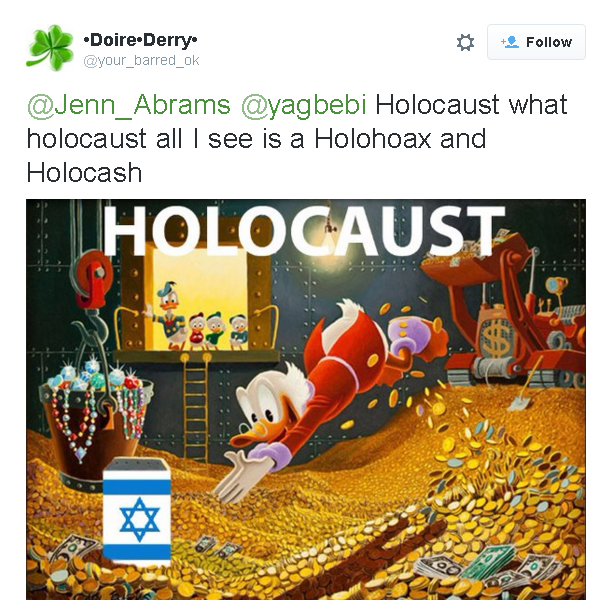 "Clintderry" got suspended.
But he seems to have returned with a new account, "your_barred_ok". 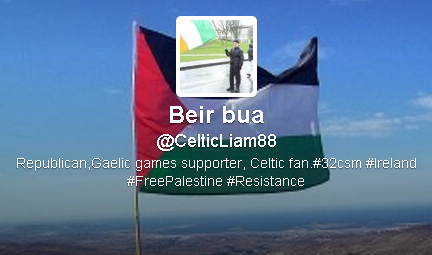 RIRA supporter "CelticLiam88", 19 Oct 2013, calls for the killing of the 6 million Jews of Israel in order to bring "peace".

He is angry at those who tried to stop the Holocaust. 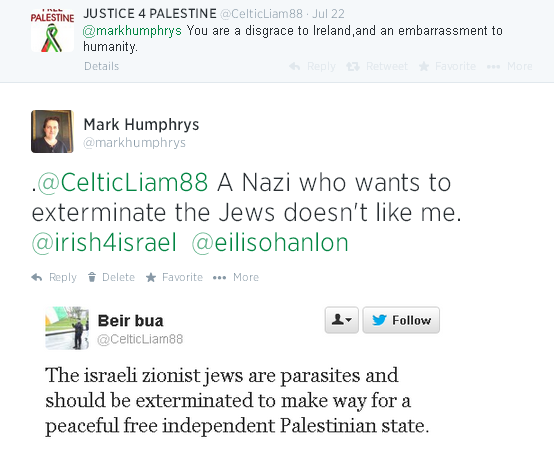 The irony is that I do go out in public while the Nazi doesn't.