In the politically-correct world, the doctrines of Christianity can be freely criticised and ridiculed - which is fantastic, and a hard-won freedom that cost the lives of many atheist and freethinking martyrs.

But you can't do the same to Islam. Leftists will call you a "racist" if you try to criticise any religion other than Christianity. 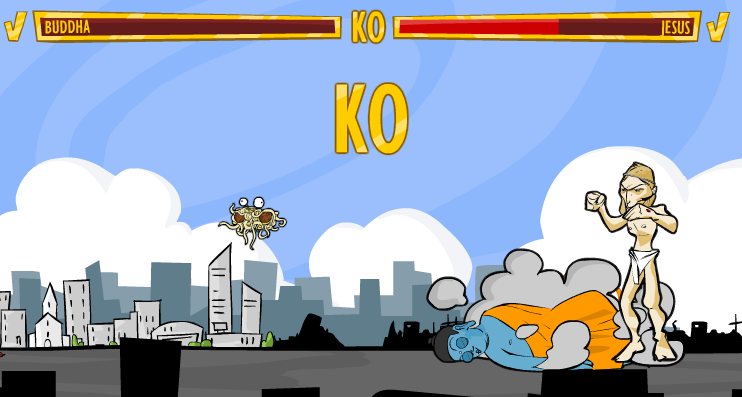 The free (Creative Commons) online Flash game "Faith Fighter" by Molleindustria.
Gods and prophets engage in hand-to-hand combat, including Jehovah, Jesus, Buddha, Muhammed and the Flying Spaghetti Monster.
Play it here and here.
This game shows the problems for reactionary Islam in the modern globalised world.

Both the UK and Ireland have introduced terrifying new laws recently, which, depending on how they are prosecuted, may outlaw criticism of religion. These laws are an offense against the concept of a free society.

Artists rarely do anything genuinely brave and daring. Insulting Christianity, Judaism, America, Britain, Israel, capitalism, zionism and neo-conservatism is safe, risk-free, and likely to win praise from your peers and money from grant bodies. If artists were genuinely brave and daring, they would insult and criticise people for whom there is some element of risk attached - for example, Islam, Scientology, the Nation of Islam, cults, organised criminals, western terrorists, living dictators, and third-world revolutionaries such as the Palestinians.

Mocking Christianity is not daring. Mocking Islam is.

Christianity and Islam are treated differently.
Comedian Stewart Lee illustrates the cowardice of Western comedians.
Stewart Lee co-wrote the blasphemous Jerry Springer: The Opera, which horrified Christians.
Fair enough. But when challenged to also mock Islam, he completely chickens out.
This is his "anti-Islamic" standup. Pathetic and cowardly. 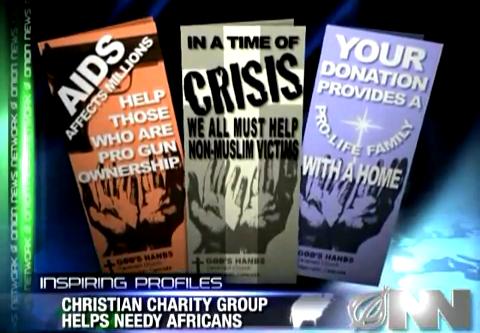 Slagging off Christianity because slagging off Islam is too risky (and too accurate):
The Onion (click to play) does a parody about a Christian church that only wants to give to "straight" Africans and "non-Muslim" earthquake victims.
Of course, Christian charities are not like this. Christian charities are notable for providing aid to people of other religions and none. Often in fact they end up feeding people who persecute Christians.
The Onion doesn't have the guts here to face the real issue - that exactly these kind of charities exist - indeed are the norm - in the Islamic world.

Far from mocking Islam. many left-leaning non-Muslims go out of their way to praise it and whitewash it.
Karen Armstrong thinks we should admire Abraham, a religious maniac prepared to slaughter his own child because of the voices in his head. 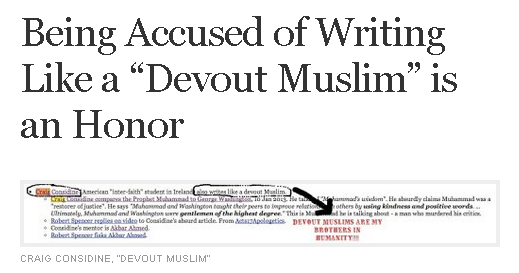 Craig Considine noticed this page in June 2013.
He tweeted the above blog response, but declined to link to this page or tell his readers what site it is.
Screenshot but no link - that's how to treat the evil counter-jihad!
Nor did he engage in debate when I tweeted him. No platform!

The ludicrous keywords on the above show clearly the left's name-calling rather than debate. 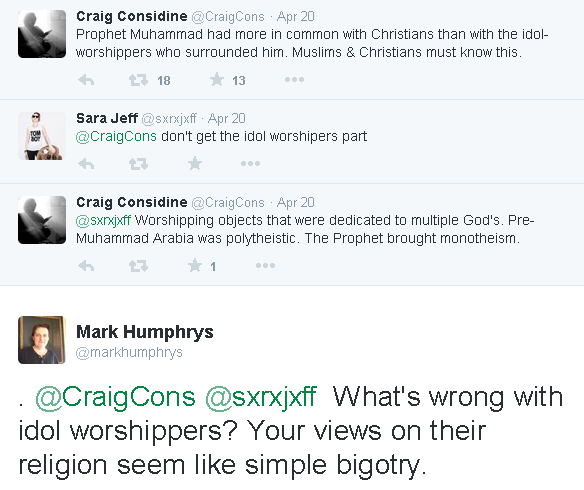 And again he declines to debate, Apr 2015.
He seems to approve of the thuggish suppression of the pagan religion of Arabia by a new religion that was equally idiotic but much more violent.
The Kaaba in Mecca had hundreds of idols representing many gods. Muhammad destroyed them all.
Muhammad ended religious freedom. And Considine supports that?

Mad as a hatter.
From here.

People like Craig Considine should really read more about Muhammad.
He could start with the footnotes in this video: "My Prophet, My Führer" (in the style of Downfall).

Many people do have the courage to mock Islamist terror, even if few have the courage to mock Islam itself.
"Have I Got News for You", BBC TV, June 2011, has a funny joke about Islam and its relationship with terror.
Comedian Sharon Horgan said: "The Independent described the Dostoevsky metro station ... as the Mecca for suicides. Not to be confused with the Mecca for suicide bombers - which is Mecca."
Of course (of course!) she received threats from Muslims for joking that their religion is not peaceful. Yes, death threats will prove Islam is peaceful!
She ended up issuing a grovelling apology: "I am anti any prejudice of any kind. And particularly the generally lazy media portrayal of Muslims or any blanket negativity towards Islam. ... Any of the comments on here, which are suggesting I am racist or in any way anti-Muslim are a load of nonsense. ... Really hope that people understand this and stop threatening me."
By the way, are we allowed mention in passing that Islamic suicide bombers actually bombed Moscow metro stations (though not Dostoevsky station) in Feb 2004 and Aug 2004 and Mar 2010?
Copy here.

Sacha Baron Cohen is edgier than almost any artist, actor or comedian in the world.

Is Ayman Abu Aita linked to the Al-Aqsa Martyrs Brigades?

Is Ayman Abu Aita linked to the terrorist group the Al-Aqsa Martyrs Brigades? Yes he was, according to reports. And yes he still is, in the sense that he is linked to their political wing Fatah.

Greece - where attacking Christianity is daring 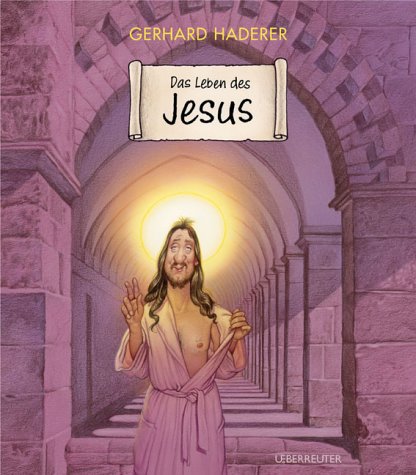 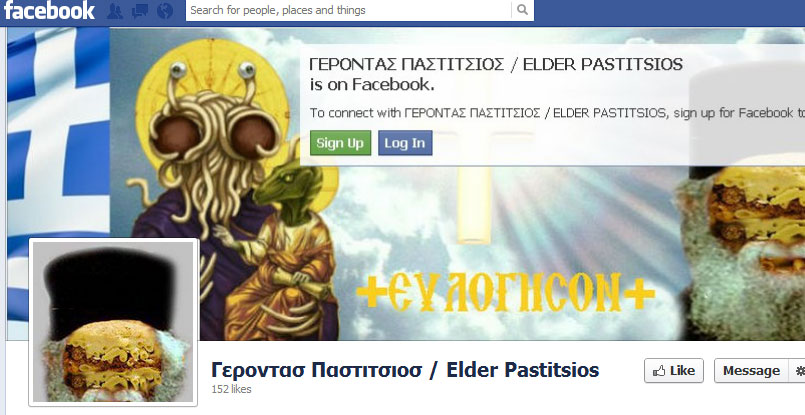 "Elder Pastitsios", a parody of Greek holy man Elder Paisios.
The parody is based on the parody religion Flying Spaghetti Monsterism and the dish pastitsio.
See the Facebook pages gerontas.pastitsios and elder.pastitsios.

Poland - where attacking Christianity is daring

Russia - where attacking Christianity is daring 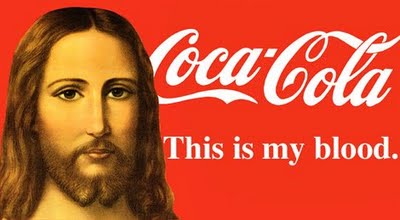 Andrei Yerofeyev and Yury Samodurov, two Russian art curators, were fined in 2010 in Russia for this exhibition that "offended" Russian Orthodox Christians. 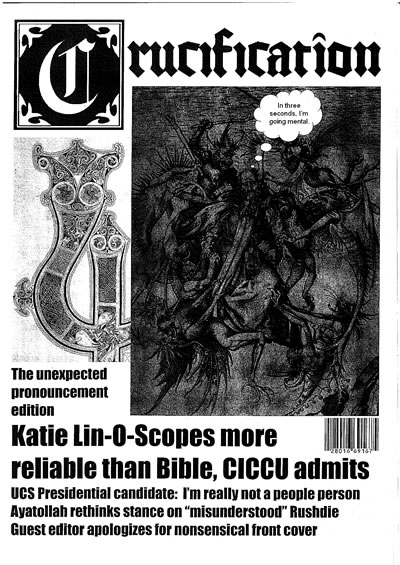 The cover of the banned issue of "Clareification".

Some of the banned issue.
Intelligent, witty satire, poking fun at the touchy, aggressive, violent, sanctimonious, hypocritical Islamic street, which bombs churches, executes nuns, and cuts the head and limbs off priests in protest at suggestions that Islam is violent.
Such satire is badly needed in these times of dour, humourless religious fanatics.
If this material is banned at Cambridge, then Cambridge is no longer a free university.
If this material is banned in Britain, then Britain is no longer a free country.

What movie has ever shown the life of Mohammed?

What movie has ever shown the life of Jesus or Moses?

The film "Innocence of Muslims" 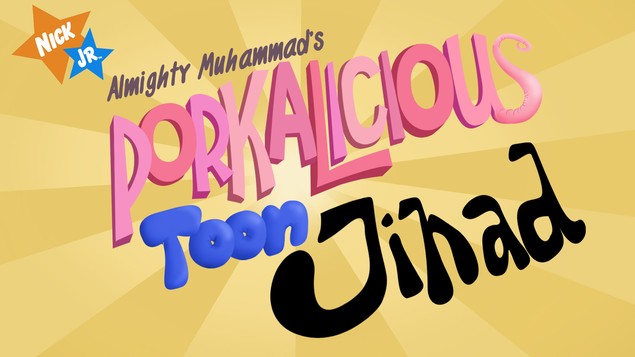 The Onion, during the Innocence of Muslims riots of Sept 2012, announces that Nick Jr. is temporarily suspending production on its forthcoming children's program "The Almighty Muhammad's Porkalicious Toon Jihad".
"While we still believe that thousands of young viewers would really enjoy seeing Muhammad go on his weekly pilgrimages to his big bacon mosque with his rabbi friends Hershel and Moishe, our company nonetheless believes it's best to indefinitely postpone the show's release. ... Hopefully, when the international climate is slightly less volatile, children will be able to enjoy all of Muhammad's hijinks ..."
It is satire, but it has a serious point. Someday, when we are free, people will be able to make such a program without fearing for their lives. It will be a great day for the planet when that is possible. 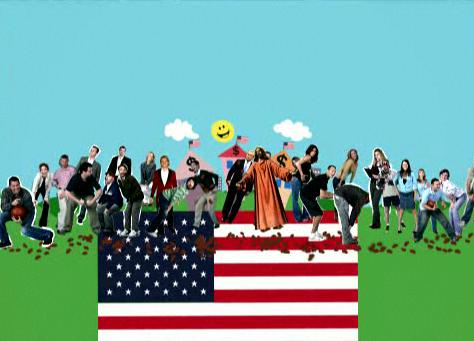 Jesus and President Bush crap all over the American flag and all over each other.
This is Al-Qaeda's "retaliation video" in South Park's Cartoon Wars Part II (2006).
No Christians rioted and killed in response.
This is because Christianity is far more advanced than Islam.

"Criticism of religion is not only the starting point of all criticism. It is the prerequisite of any kind of criticism."
- Lars Hedegaard sums up the Enlightenment.

"The college is now arranging a meeting for next term to discuss the problem of maintaining free speech while avoiding offence."
- Clare College, Cambridge, 16 Apr 2007, after disciplining a student for criticising Islam, show they have no idea what "free speech" actually means.