Above all else, I was shocked by the left's response to 9/11. I was so naive as to think that the left I had grown up with hated fascism, especially religious fascism, and would be the first to join a war against it.

Instead they have emerged as the war's opponents, often with open sympathy for the fascists.

Secondly, I was impressed by the neo-conservative right's analysis of the problem (that it was not caused by poverty, for example), their understanding of human nature and of the mind of the enemy. Leaving the left is not about "selling out" to mortgages and money, or anything so mundane. It is about growing up and understanding better unchanging human nature and the bleak tragedy of the world.


25 year old leftist Edward T. Hall III and various crying friends at the Occupy Wall Street protests, Oct 2011.
It's almost sweet.
Edward T. Hall III grew up in a wealthy home. His grandfather was famous anthropologist Edward T. Hall. Both his parents are lawyers. He is "attending doctoral classes at Columbia University as a nonmatriculated student." (i.e. He hangs round a university without actually doing a degree.) He has "a small trust fund" from his grandfather.
All this is code for: Still a kid who does not understand where money comes from.
He is "barefoot and dressed in loud, multicolored tights. He wore a beaded American Indian necklace and New Age jewelry, with a baseball cap pulled sideways over his long hair."
Isn't he adorable? But isn't 25 a bit old for this kind of play-acting? Shouldn't he be growing up soon?
Here is the music version.
See background video.

(1985) by Sting.
Sting hopes that "the Russians love their children too". But he does not realise that, no, the answer is they don't. At least, the regime doesn't.
Sting displays the peacenik left's recurring delusion about totalitarian regimes - the idea that these regimes must care about their peoples. Western leftists find it hard to understand that non-democratic regimes do not necessarily care about famines, poverty, natural disasters, and so on. The idea that non-democratic regimes want the same as we do (freedom, peace, prosperity and so on) is a recurring western delusion. It is an example of projection.

The Lockerbie bombing, carried out by Libya, 1988.
In 1986, I naively marched in a protest against the American bombing of Libya in April 1986.
"Stop the killing", I think I remember saying.
Unfortunately, Libya was busy planning its own response. It decided to murder 270 innocent men, women and children over Lockerbie as its reply. Well that put me in my place.

Arafat calls for jihad, 1996.
Before 9/11, I did not realise that the Palestinian war was just more jihad.
I thought it was about territory, or nationalism, or something.
Of course, it is jihad. It has always been jihad. 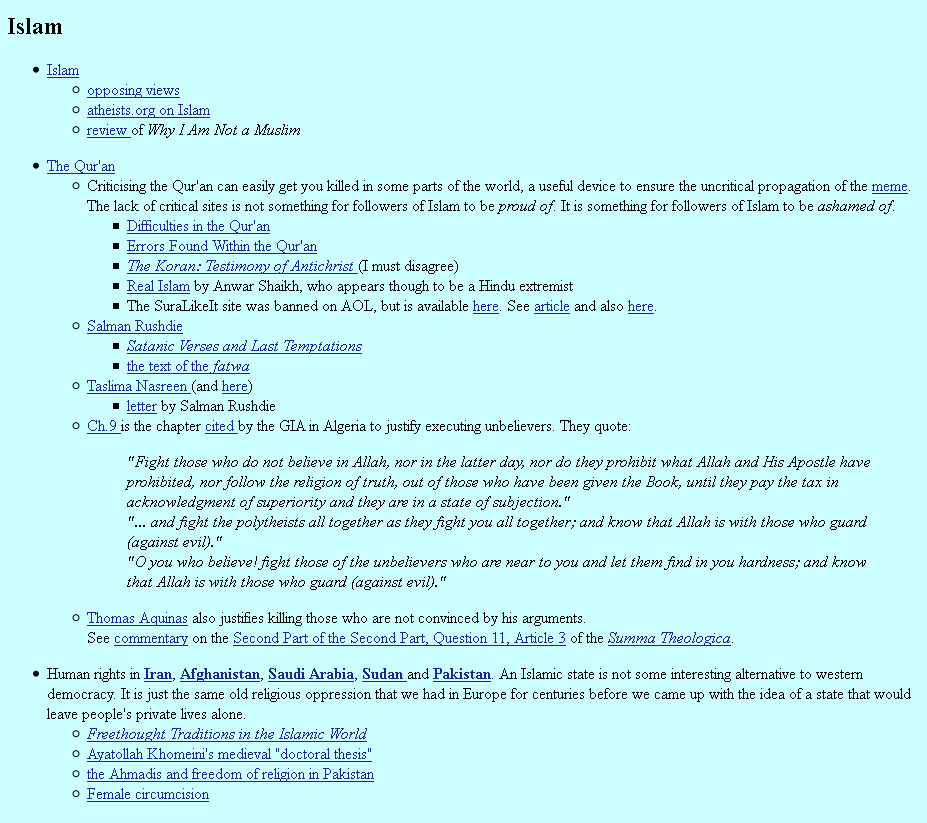 I always thought the liberal-left I grew up with hated fascism, especially religious fascism, and would be on the right side in a war against fascism. And yet the test came with 9/11 and they failed it. It makes me wonder who are these people and what do they stand for?

These people would never have supported the American and British Allies in WW2. They would have been like de Valera - neutrals.

The Irish left and Iraq

Yes, Iraq did not go well after Saddam. Iraqis disgraced themselves with their violence after 2003. But that is their shame, not America's. America should feel no guilt for what it did. Getting Saddam deposed and killed was a good day's work, and every liberal should applaud it.

Apostates from the left

Former hard leftist Christopher Hitchens moved away from the left after 9/11. Hitchens is fascinating not because his analysis is the best (the neo-con or classic-right analysis is, I find, far superior), but because he went through the same process of utter disgust with the left that I went through.


Hitchens says Islam is nonsense: "The idea that God speaks to some illiterate merchant warlord in Arabia, and he’s able to write this down perfectly, and it contains the answers to all human — don’t waste my time".

Like a pious nun, Hitchens in 2010 complains that people say mean things about President Obama.
Given what he himself has said about political figures over the years, this is rich.
Just because he worships the US President, now it is wrong to attack them.
He is horrified by people "calling the President a secret Muslim, or a closet Kenyan, or - believe me this is said, and widely dissemenated - the unacknowledged lovechild of Malcolm X. Try anything once. Any old smear will do. It makes me very angry."
Mercy! My heart! People being mean to the US President! I may faint with the horror.
And this is from a man who wrote: Not Even a Hedgehog: The stupidity of Ronald Reagan when Reagan died in 2004. 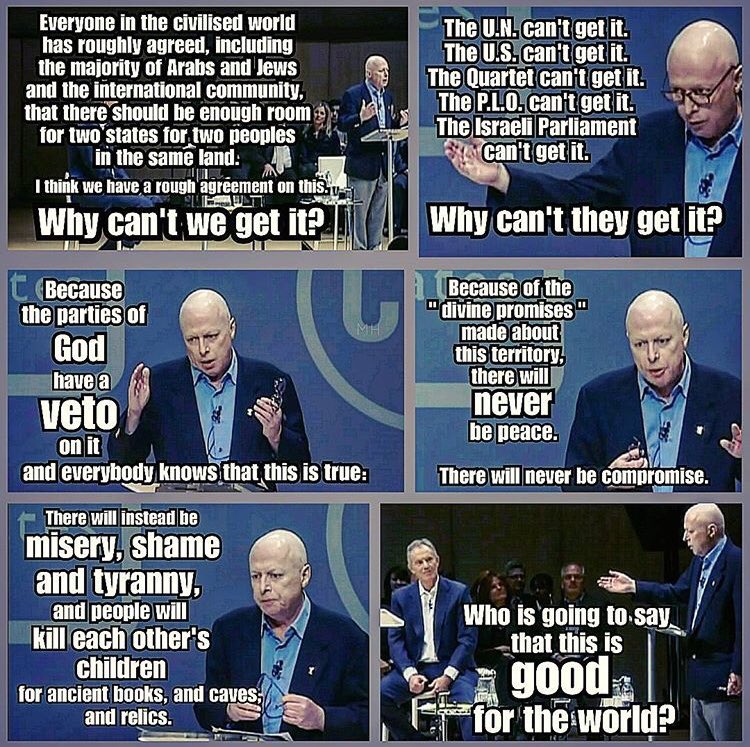 Hitchens talking leftist received-wisdom rubbish about Israel. From here.
Well, you can't be good at everything.


Martin Amis worshipping Obama in early 2009 interview.
He says Obama's election is "the next stage of evolution".
And apparently talking to Iran and Hamas is all you need. Why did no one think of that before?
Hilarious and also sad.

""But isn't the working class obliged in the present conditions to aid the democracies in their struggle against German fascism!" That is how the question is put by broad petty bourgeois circles for whom the proletariat always remains only an auxiliary tool of this or that faction of the bourgeoisie. We reject this policy with indignation. ... The victory of the imperialists of Great Britain and France would be not less frightful for the ultimate fate of mankind than that of Hitler and Mussolini. Bourgeois democracy cannot be saved. ... The task posed by history is not to support one part of the imperialist system against another but to make an end of the system as a whole. ... this war is not our war. ... the Fourth International builds its policy not on the military fortunes of the capitalist states but on the transformation of the imperialist war into a war of the workers against the capitalists, on the overthrow of the ruling classes of all countries, on the world socialist revolution."
- Trotsky's Fourth International issues its Manifesto, May 19-26, 1940 declining to support the democracies, as Nazi Germany conquers France.
Hitchens never understood what Trotsky was.

People in the middle

Wow. Harris sure has some fans.
I liked atheist Stephen Knight ("Godless Spellchecker"). I link to his site approvingly.
But in April 2015 I made the error of criticising his god, Sam Harris, for the stupid quote above.
I was quite polite, but Knight got increasingly angry and finally blocked me. Just wow. Yet another reason to wonder about the sloppy thinker Harris.

Here is an example of why I am not a Harris fan.
Brett Kavanaugh was nominated to the Supreme Court in 2018, and there was controversy when a woman claimed he sexually assaulted her in the 1980s. There was no evidence of this, and the accusers ended up pathetically pointing out that Kavanaugh drank beer in the 1980s.
Here, Sam Harris joins in.
At 7:45, the "atheist" Sam Harris is complaining that a young man drank in college. He sniffs that teenage yearbooks mention drinking. Good God. "Atheist" yet somehow a pious Victorian nun.

Geoffrey Wheatcroft is one of the odd brand of "left-wing Tories" - Little Englander isolationists who long for the old days of British power, and do not accept that the most noble thing Britain can do is to support America.

People going the other way (from "right" to increasingly "left")

For some people, there was a moment of clarity after 9/11 in 2001, when they saw the face of the foreign enemy, and realised that we might need America to help us fight this. And then the novel feeling faded, and old ways of thinking returned.

Others have been moving in the wrong direction for longer. Some bravely opposed Saddam when he was America's friendly dictator in the 1980s, but then betrayed that by switching to supporting him once he became America's enemy from 1990 onwards.

Radical Son by David Horowitz, 1997, describes the abuse that Horowitz got when he left the left in the 1980s and started supporting Reagan. With no sense of irony or foresight, he describes two of the most vicious leftist critics of his apostasy as: 4 years later, 9/11 would happen. Hitchens and Berman would both lose their faith and become supporters of America. Indeed, Hitchens and Berman are the two most prominent leftist apostates produced by the whole 9/11 era. You couldn't make it up.

And the story will repeat. Maybe in the future George Monbiot or Richard Dawkins will get sense and leave the left. 9/11 didn't do it for them. But some further, worse attack could. Leaving the left is not about "selling out" to mortgages and money, or anything so mundane. It is about growing up and understanding better unchanging human nature and the bleak tragedy of the world.

"a significant number of people changed their views of global affairs immediately after September 11, 2001. Our country was attacked by an ideology that was misogynistic, homophobic, anti-democratic, racist, xenophobic, and religiously intolerant and that sought world domination — in short was the enemy of all classically liberal society since the Enlightenment. The majority of our people recognized this and sought to push back, asserting the values of our culture — for a year or two. Then — as that most hypocritical of ideologies “political correctness” reasserted itself — the majority of that majority reverted to type and we had the election of Barack Obama ... twice. A few of us remained changed, now open to ideas we once thought anathema, or reactionary, when we were younger. How did that happen and why was I among them?"
- Roger L. Simon on the reaction of most people to 9/11.