Introduction - What is the left?

What does "left" mean in the modern world? I propose that the modern left is defined as those who do not support the West against its enemies.

The left has a proud history on some issues (notably social issues) and a less proud history on others (notably foreign policy). The left pioneered rights for women, blacks, gays, atheists and other minorities. It opposed religious and sexual censorship, and enabled sexual freedom. This is the greatest part of its heritage. But this is history now. All this is uncontroversial now. Most of the modern right agrees with this basic agenda. Certainly I do. So what defines "the left"?

The moderate peacenik leftist's foreign policy is the most dangerous of all his ideas. He does not explictly love tyranny and hate democracy. But he talks as if he does. He is disgusted by the West (especially leadership and front-line countries like America and Israel), does not admire it, mocks its leaders, spits on its military and on any soldier fool enough to die for it, and in general (whether he likes it or not) gives support and encouragement to the barbarians outside the gates who wish to destroy the West and everything we love.

The mind of the left is very familiar to me. He does not really believe in the existence of barbarians outside the gates. He thinks violent communist or third-world or Islamic revolutionaries must have logical reasons for what they do. They must be responding to rational grievances, rather than be driven, say, by demons inside their heads. He believes that if the West - and in particular America - was weaker, it would be a less (rather than infinitely more) violent and dangerous world. In short, he is someone whose foreign policy ideas will lead to the triumph of tyranny abroad and ultimately at home too.

Modern leftists (on foreign policy and economics at least) are the counter-Enlightenment - those who refuse to believe that we basically solved these problems in the 18th century, and instead look to some imaginary utopia that won't actually work. Safe in the bosom of capitalist democracies, they attack their protector, and praise foreign tyrannies, without fear of consequences. But their ideas do have consequences. Western leftist intellectuals have spread endless misery to the third world, leading to the death of millions. And there is always a threat at home too. So far, their ideas have not been successful at home. If they ever were, Israel, and Europe, and the West itself, would fall.

The dream of revolution

If we define the modern left as those who do not support the West against its enemies, then it has a wide range - from violent communist revolutionary totalitarians to peace-lovers who simply abhor war and imperialism and prefer to appease foreign tyrants. What they have in common - the moderates as well as extremists - is a dream of a utopian society that is different in some revolutionary way from modern bourgeois, western, capitalist consumerist democracy. But perhaps the single most important lesson of the past century is that this dream of utopia has been responsible for more deaths and suffering than any other human idea.

The lesson of the 20th century

In the 20th century, 100 million people were killed for the dream of a new revolutionary socialist society, and the killing continues today. 2 billion more lives were ruined through state-caused poverty, famine and emigration. 1 billion more people in the West lived for decades under the threat of nuclear annihilation by Marx's followers. The lesson of the 20th century is that boring bourgeois conservatives are not the mass killers - starry-eyed idealists are.

And yet the western left seems to have learned nothing from the 20th century. Here they are again, those siren voices, unashamed and free of guilt, still insulting the West, still looking for alternatives. If we listen to them, 100 million more will die in the 21st century.

Read the Communism page first. Understand the butchery that has already taken place first, before you follow the siren voices of any new revolutions. Revolutions do not necessarily liberate. Historically, revolutions have enslaved as often as they have liberated.

The Museum of Communism

The Museum of Communism has an excellent FAQ summarising a number of points I've felt for years: 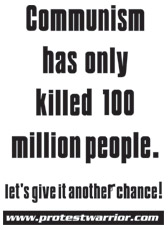 Many on the left are in effect saying this.
Poster from ProtestWarrior.

Communism is a sister philosophy of Fascism

Despite their denials, fascism and communism are sister philosophies, almost identical, at least when compared to bourgeois, liberal, free market democracy. Both are totalitarian ideologies with contempt for dissent, debate and elections. In both ideologies, the individual is worthless and exists to serve the state. Both worship the cleansing power of state violence. In both, certain groups (kulaks, Jews) are targeted for camps and liquidation. In both cases, these groups are innocent of any crime.

Hitler did not invent the modern industrialised killing of the genocidal totalitarian state. Lenin did. Hitler just copied what the Bolsheviks were already doing. The Bolsheviks had already killed about 20 million people before Hitler even got going.

Lenin and Stalin showed what the future looked like - the "scientific" state organising the people. Hitler added his own variants to the basic theme. This is how many 1930s intellectuals saw it. They saw fascism as a development of modern state socialism.


George Bernard Shaw supports Hitler, Stalin and Mussolini.
He viewed them all as part of the new socialist era.
Clip from The Soviet Story.

The modern left and the continued dream of revolution

These dreams take many forms, from the comical (Russell Brand) to the sinister (alliance with violent right-wing Islam). But these dreams are not ending, and will threaten us for generations to come.

The dream of "revolution" is summed up on a personal level in "Different" at webcomicname.com.
"I want things to be different. ... Oh no."

The Marxist version does it to entire countries:
"This place could use some communism! ... That wasn't real communism."
Each generation of Marxist believers needs to do the experiment again. And again. And again.


"I do think America is a great idea. I think the American revolution is the only one which has lasted, the only one left. It still has a dynamic. It is the only one capable of a universal application."
- Christopher Hitchens with the last word on the end of the murderous utopian century of the left.