Politics - The modern left - The mind of the left

What is wrong with us that we are attracted to leftism when we are young?

Stanley Kurtz describes the leftist mind I know so well in Ireland. Defending democracy and opposing tyranny "is just too obvious - too embarrassing" for the sophisticated modern mind. The young modern leftist prefers to feel that only he understands the true state of the world - that the rest of the population is too "stupid" to see it.

The ordinary people don't agree with him because they have their consent "manufactured" by the media - they do not think for themselves - but the leftist does. He can see beyond the propaganda and realise that the poverty, famine and tyranny in the world is caused by the West (rather than, for example, by the moronic ideas of the non-western world). Concepts like "The Free World" are the absurd and simple-minded propaganda of ignorant Americans who do not understand the world. The ordinary people deal in concepts like "good" and "evil". - Our leftist sophisticate understands how simplistic such ideas are, and how genocidal police states are just another culture, and not to be regarded simplistically as "inferior".

The leftist liberates himself from the ideas of the "stupid" people around him, and feels vastly superior to them. In the extreme case he will quite literally end up defending tyranny and opposing democracy.

The ordinary people have no irony. They just say flat out that America is "superior" to some illiterate Islamic theocracy, or some famine-wracked totalitarian gulag state. The leftist thinks they have never thought about it. In reality, they are grown-ups who understand all too well how the world works. The leftist understands nothing except the coffee-house world of safe, sheltered, protected, rich people. 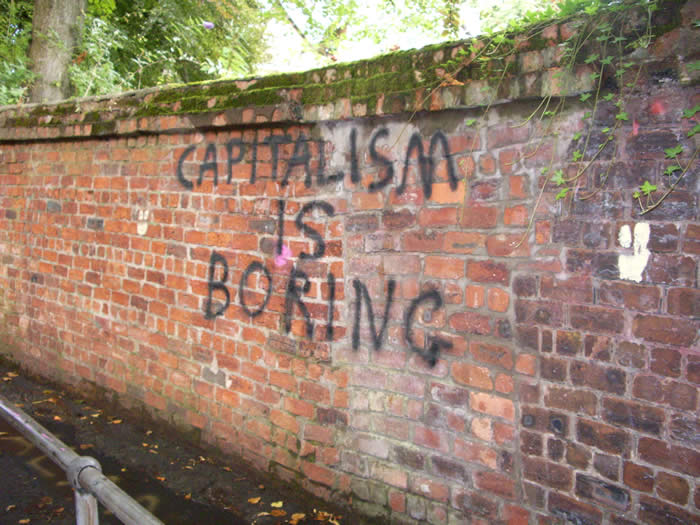 Could this sum up why young people want to smash everything that is working perfectly fine, in favour of untried systems that won't work?
Graffiti on a wall in a wealthy area of Glasgow.
Photo by JJ Gilmour. Other views of the same wall here and here.
Note the defacement of a beautiful old wall. Destruction of irreplaceable ancient beauty and heritage has been a main feature of modern socialism.
Harry's Place: "Of course the fools who believe this fail to grasp that for most ordinary people, the problem with capitalism isn't that it's boring; rather, it's not boring enough."

The mind of the left

From bureaucrash.com (and search).
Che Guevara was, of course, a fighter for tyranny, not freedom.
He fought against human rights, not for them.

Having to pay tax is a big reason why people stop voting left-wing and never go back.
Meme shows the person changing from Bernie Sanders to Ron Paul. 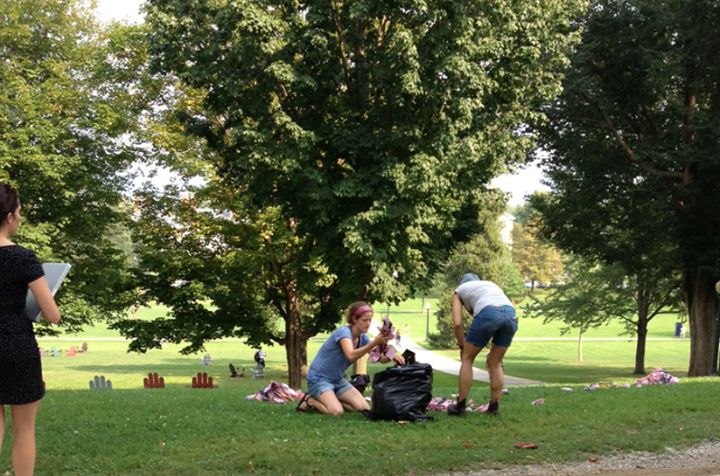 You could not make this up:
American left-wing nutcase Anna Shireman-Grabowski hates her own country so much that she destroys a memorial to the dead of 9/11 at Middlebury College, Vermont, Sept 2013.
Photo from Young Americans for Freedom.

From ProtestWarrior.
See also the t-shirt.

It is no coincidence that so many of the modern academic left in the humanities have supported fascism and communism. Postmodernist "thought", with its lack of intellectual rigour, its denial of the existence of truth and facts, and its hatred of the Enlightenment and science (basically, by people who were not smart enough to do mathematics or science), lends itself naturally to garbled, meaningless writing, and support for non-rational, West-hating, totalitarian regimes.

Postmodernist publications, since they are not based on reason and evidence, are particularly vulnerable to hilarious hoaxing through fake papers. Some wonderful work has been done exposing their shoddy standards in this way.

"The function of language is to express one's thoughts. If you think truth is possible, then you work hard to understand the world clearly and completely. But if you doubt that truth is possible, that has psycho-epistemological consequences: you come to believe that the world is at best fuzzy and your mind incapable of grasping it - you come to believe deep down that all is fractured and disjointed - and your writing will tend to the fuzzy, the fractured, and the disjointed. And in consequence you will come to be suspicious of clarity in others. Clarity, from this perspective, must be an over-simplifying."
- Stephen Hicks on Postmodernism.

"We must hope that the painful bolus of postmodernism will pass through the costive bowels of academic life sooner rather than later. Pass, of course, it will eventually."
- Gross and Levitt.

The left and "evil"

The right is fairly straightforward. It regards dictators, genocidal killers and terrorists as "evil" and thinks killing them is generally great, and even to be celebrated.

The left loves to demonstrate its claimed moral superiority to the right by mocking the right's "simplistic" ideas of "good" and "evil", and by whining and complaining whenever a bad guy gets whacked. I don't know who they're impressing.

American Jay Austin quit his job to go cycling round the world with his girlfriend.
Here in April 2018 in Morocco he notes correctly that most people are good, but then asserts that evil does not exist: "Evil is a make-believe concept we've invented to deal with the complexities of fellow humans holding values and beliefs and perspectives different than our own".
Three months later, in July 2018, evil, in the form of Islamic State, murdered him and his girlfriend in Tajikistan because they were unbelievers.
In the real world, evil is not a "make-believe" concept. Islamic State is evil. Hamas is evil. Jihad is evil. And western intellectuals should stop making excuses for evil.

The left is racist

The left hates the West above all other parts of the world. They tend not to be interested in human rights abuses by non-whites and non-westerners.

BBC dhimmi Kate Humble gives a striking example of the mind of so many confused westerners, on the program The Frankincense Trail (2009).
She is in Jeddah in Saudi Arabia. This is a religious dictatorship with no human rights, where gays, women and atheists are persecuted. She hears the Islamic call to prayer, in a country where other religions are not free to worship, and she does not find it sinister but rather moving. She even cries!
She watches the shops closing without asking questions such as: "What happens to a man who does not want to close his shop? What happens if you do not want to pray?"
No westerner would give a pass to oppression by right-wing white Christians like this. But oppression by strange non-westerners is somehow different, and even moving. 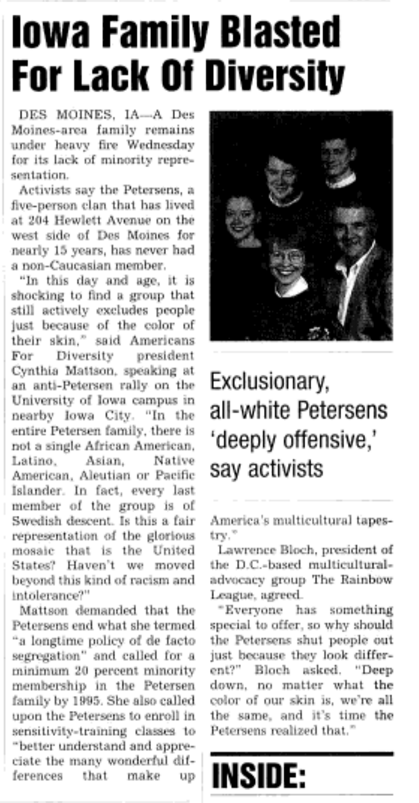 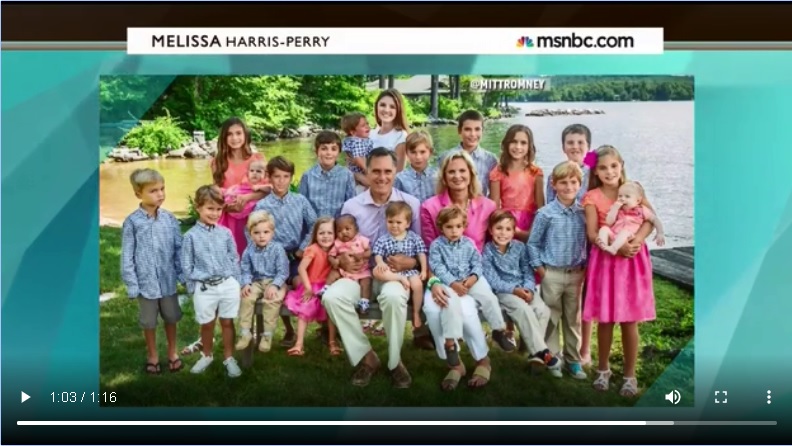 Real life in Dec 2013:
Progressives blast 2012 Republican candidate Mitt Romney for having only one black grandchild.
The anti-counterjihad Muslim comedian Dean Obeidallah sneers at the Romney family: "I think this picture is great. It really sums up the diversity of the Republican party, the RNC. At the convention, they find the one black person."

A tweet by left-wing, anti-Israel MP David Ward sums up the racist view of the Palestinians.
This is on 18 Nov 2014, in response to the synagogue massacre of Jews by racists.
Ward says the racist killers can't help it. They are "driven to madness" by the failure of the international community to "deal with" Israel. They are mere animals, or madmen. They have no moral agency and cannot make any moral decisions.

Survey of human-rights criticisms by churches

This astonishing survey of human-rights criticisms by churches sums up the entire sickness of the western left.

Every leftist in the world should read this report, and read its recommendations. This report explains exactly the difference between my world view and the left-wing world view. It explains in a nutshell why I am not a leftist.

The left is racist - It does not treat all races equally

When criticising people for human rights abuses, the left is not colour-blind. That is my basic criticism.

Not criticising Arabs or Africans does not show how enlightened you are. It shows how racist you are. 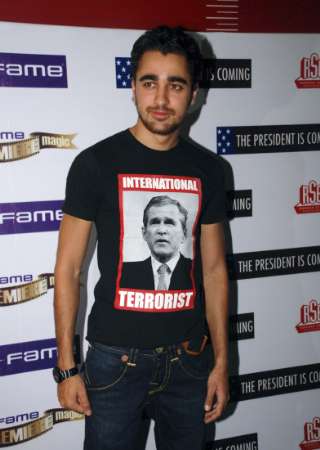 Left-wing stupidity and blindness is not confined to the West:
Bollywood star Imran Khan, a Muslim, wears a t-shirt in Mumbai on 26 Nov 2008, accusing Bush of being a terrorist.
On the very same day, in the very same city, Muslim terrorists began a rampage killing 160 innocent people in a multi-day orgy of slaughter.
Will Imran Khan ever wear a t-shirt condemning Islamic terror? Of course not.
As Andrew Breitbart says: "Mr. Khan - a member of India's Muslim minority - chose not to mock international terrorists who kill in the name of Allah. He and his co-religionists know the deadly results for those who do."
As Andrew Bolt says: "Hating dad is safer".
Picture credit REUTERS/Manav Manglani (INDIA). From here.