2003 was a great year for the world, a moment of hope for all peoples suffering under tyrannies across the world.

Tragically, though, the forces of evil (totalitarianism, jihad and genocide) fought back after 2003. They refused to stop killing. They refused to allow the Iraqis live in peace and freedom.

The western left, which opposed the liberation of Iraq from Saddam, said that Iraq should be abandoned to these people. They said, in effect, that if evil fights back, evil should win.

The western left won the day. Their man Obama took office in Jan 2009. Obama then abandoned Iraq to the jihad and ISIS.

The reasons for the Iraq war 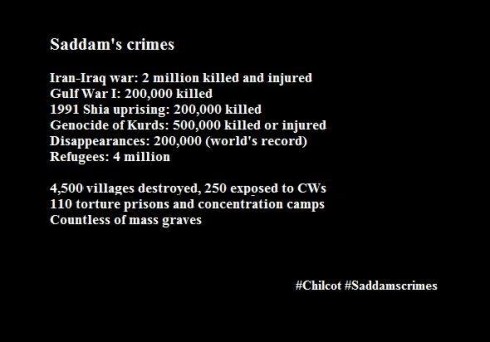 Why I supported the invasion of Iraq in 2003.
From here.

The "anti-war" protesters say: Don't do anything. Never do anything. Leave tyrants to do what they like. And then we are innocent. We have no blood on our hands. It's seductive. I just don't know if it is moral.

The liberation was a brilliant success. In only a few weeks, Saddam's barbaric regime was destroyed. There were few innocent casualties. It was a triumph by any historical standard. Iraq was liberated. Uday and Qusay were killed. Saddam was captured and executed. Every dictator in the world was nervous. 2003 was truly a year of hope.

The western media were wrong

The BBC were wrong

During the Iraq War, the BBC were nicknamed the "Baathist Broadcasting Corporation" by pro-war bloggers. Like RTE in Ireland, the taxpayer in Britain is forced to pay for a centre-left, anti-American, anti-Israeli station.

The Arab world was wrong

After being forced to listen to weeks of panicking ignoramuses in the Irish and British media, it is a breath of cold reality to read Victor Davis Hanson's columns for March and April 2003 and understand what happened during the Iraq war, and why the Allies won.


One standard for Bush, another for Hollande:
Here, in Jan 2013, France liberates Mali from jihadist terrorists.
Hollande did exactly what Chirac condemned Bush for in 2003.
France ignored the UN, invaded, and were welcomed as liberators.

Charles Johnson (back when he was good) on the liberation of Iraq:
"This is a truly historic moment, LGF readers. To the naked protesters, the Hollywood whiners, the Indymedia haters, the BBC and CNN and MSNBC and Al Jazeera and Arab News: This moment is IN OUR NAME. Those who sought to keep the Iraqi people in their living hell, who stood in the way of their liberation, and insisted that the US and Britain and Australia and our many other partners had no right to take action to defend both the Iraqis and ourselves: This was NOT IN YOUR NAME. And we won't forget where you stood, in your ignorance and fashion-driven hatred of America. We won't forget."