Since the liberation of Iraq from Saddam in April 2003, the forces of state tyranny and religious oppression have fought a sporadic violent guerilla campaign to try to stop freedom, democracy and human rights coming to Iraq. Refusing to argue their case in the court of public opinion and debate, and declining to ever try civil disobedience, or even standing for election, they have instead turned immediately and as a first resort to the torture and suicide bombing of men, women and children. This Iraqi so-called "resistance" is probably the most depraved, perverted and evil armed force operating in the world today. Their main killing and torturing has been of Muslim civilians.

Ever since 2003, much of the western left, the western media and the Democratic party have been trying to figure out a way for this Iraqi "resistance" to win, and a way for America to suffer a crushing and humiliating defeat to the global jihad.

Ever since the liberation of Iraq in 2003, the left has a new mantra, which is that the troops must get out. "END THE OCCUPATION" say all the posters. It doesn't matter what happens afterwards. All that apparently matters is that the troops come home.

The left wants Iraq to be Vietnam.

From liberation in 2003 until 2006 or so, as I argued above, the majority of Iraqis were on my side. They didn't support the resistance. They didn't want the US to leave. The wonderful election of 2005 showed there was hope for Iraq, that it was a country that had a future.

But then the hate-filled Sunni jihadi fighters managed successfully, after much deliberate bloodletting, to ignite a Sunni-Shia civil war in 2006, and Iraqis' opinions began to harden. Apart from the Kurds, who remain model citizens, the other Iraqis are retreating into tribal bunkers, and more and more of them now have the kind of appalling opinions you associate with the Palestinians or other Arabs. For the first time, a majority of the Iraqi people are beginning to send out a message that the world should give up on them, that they do not deserve a decent society. The tens of thousands of heroes in the Iraqi security forces who are fighting and dying for a free Iraq are now part of a large minority, but for the first time maybe no longer the majority.

If it is the case that the non-Kurdish Iraqis are incapable of building a decent society, and America has to give up, the left may celebrate, but it is no cause for celebration. It is a tragedy for the Iraqis, and guarantees them decades more misery, more dictators, more genocides. And it does not end the problem for the West. It only postpones it. The West will never be free of threat as long as the Middle East remains dominated by tribalism, Islamism and dictatorship. Giving up on Iraq will not mean "peace", and crisis over. It will mean that this war will go on for decades longer.

Iraq is not like Vietnam in many ways (attacks on home soil, no draft, no nuclear superpowers behind the enemy).
But they are similar in one major respect: leaving Iraq would be a bloodbath like leaving Vietnam was.

The crackpot (bereaved mother of a hero, but unfortunately, still a crackpot) Cindy Sheehan exemplifies the self-destructive left. Her son Casey Sheehan died for something - for the chance to bring a better society to Iraq. She should be proud of him.

But instead she has attacked his mission and defended his killers. She campaigned for the US troops to withdraw, for Iraq to be abandoned and the fascist insurgency to win. In short, she wants to ensure that her son died for nothing. She is entitled to her views. And one can have sympathy with her grief. But she has dishonoured her son.

The West loses momentum, after 2004

It's not just the left. The left has called for surrender throughout the Iraq war.

But the "realist" (not neo-con) right too has urged American defeat and withdrawal.

And the Bush administration has faltered after 2004.

Cox and Forkum disappointed with Bush's weak prosecution of the Iraq war.
Bush did not destroy al-Sadr (as all the neo-cons urged) when he first emerged in 2003, but rather let this blood-soaked, hate-filled sectarian thug enter politics. The (all-too-predictable) result has been the corruption of the Iraqi government, and the start of a Sunni-Shia civil war. If America loses Iraq, not killing al-Sadr may be the main reason why.
Cartoon from here and here. See Cartoon Use Policy.

The "Realists" will lose Iraq, as they lost Vietnam

Also in the dark year of 2006, it looked as if Bush might abandon neo-conservatism and turn to the failed "realist" foreign policy of his father. 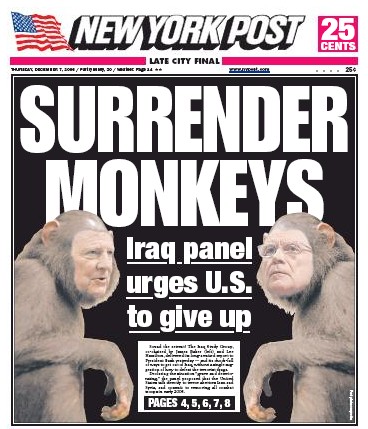 "SURRENDER MONKEYS" - The New York Post, 7 Dec 2006, sums up the Iraq Study Group's report,
which calls for surrender to the enemy, and a "realist" pursuit of the enemy's interests, rather than of ours.

If We Fail ... by Victor Davis Hanson, January 19, 2007 - If America leaves Iraq, then you can simply give up on democracy and human rights in the Middle East for another generation:

"Read the liberal literature of the 1990s and it was essentially a call for what George Bush is now doing - and being damned for. Then the liberal bogeyman was not Paul Wolfowitz, but Jim Baker ... Now the latter is the model of Republican sobriety. Arab intellectuals and much of the Western Left once decried Bakerism and called for a new muscular idealism that put us on the side of the powerless reformers and not with the entrenched authoritarians."

"But if we fail in Iraq, then again, fairly or not, the verdict will be far more sweeping ... the conventional wisdom will arise that an infantile Middle East ipso facto - whether due to Islamism, tribalism, gender apartheid, sectarianism, engrained dictatorship, or corruption - is simply incapable at this time of consensual government. Anyone who seeks such reform, whether in the Gulf, Palestine, Lebanon, or Egypt, is to be written off not only as naïve, but as reckless as well. A Libyan dissident, a feminist writer in Egypt, or an Iraqi intellectual who decries Western indifference to their plight or American tolerance of regional dictatorships will be told to quit whining and get a life, by a been-there/done-that American public. Both carping hothouse Arab intellectuals and Western liberals should be put on notice of this change to come. However imperfect, however flawed, however improperly explained our efforts in Iraq were, they nevertheless represented a costly American about-face to offer something in the Middle East other than theocracy or dictatorship - something we are not likely to see again in our lifetime. Democrats and liberals should likewise realize that for all their hatred of George Bush and the partisan points to be gained by coddling up to the libertarian and paleo-conservative Right, George Bush's embrace of freedom was far closer to their own past rhetoric than almost any Republican administration in history."