Address to Joint Session of Congress, September 20, 2001 (nine days after the Islamofascist attack):

We are not deceived by their pretenses to piety. We have seen their kind before. They are the heirs of all the murderous ideologies of the 20th century. By sacrificing human life to serve their radical visions - by abandoning every value except the will to power - they follow in the path of fascism, and Nazism, and totalitarianism. And they will follow that path all the way, to where it ends: in history's unmarked grave of discarded lies.

States like these, and their terrorist allies, constitute an axis of evil, arming to threaten the peace of the world. By seeking weapons of mass destruction, these regimes pose a grave and growing danger.

Our enemies send other people's children on missions of suicide and murder. They embrace tyranny and death as a cause and a creed. We stand for a different choice, made long ago, on the day of our founding. We affirm it again today. We choose freedom and the dignity of every life.

20th Anniversary of the National Endowment for Democracy, November 6, 2003:

Sixty years of Western nations excusing and accommodating the lack of freedom in the Middle East did nothing to make us safe - because in the long run, stability cannot be purchased at the expense of liberty. As long as the Middle East remains a place where freedom does not flourish, it will remain a place of stagnation, resentment, and violence ready for export. And with the spread of weapons that can bring catastrophic harm to our country and to our friends, it would be reckless to accept the status quo.

9 months of intense negotiations involving the United States and Great Britain succeeded with Libya, while 12 years of diplomacy with Iraq did not. And one reason is clear: For diplomacy to be effective, words must be credible, and no one can now doubt the word of America.

From the beginning, America has sought international support for our operations in Afghanistan and Iraq, and we have gained much support. There is a difference, however, between leading a coalition of many nations, and submitting to the objections of a few. America will never seek a permission slip to defend the security of our country.

We also hear doubts that democracy is a realistic goal for the greater Middle East, where freedom is rare. Yet it is mistaken, and condescending, to assume that whole cultures and great religions are incompatible with liberty and self-government. I believe that God has planted in every human heart the desire to live in freedom. And even when that desire is crushed by tyranny for decades, it will rise again.

Others understand the historic importance of our work. The terrorists know. They know that a vibrant, successful democracy at the heart of the Middle East will discredit their radical ideology of hate. They know that men and women with hope and purpose and dignity do not strap bombs on their bodies and kill the innocent. The terrorists are fighting freedom with all their cunning and cruelty because freedom is their greatest fear - and they should be afraid, because freedom is on the march.

I believe that America is called to lead the cause of freedom in a new century. I believe that millions in the Middle East plead in silence for their liberty. I believe that given the chance, they will embrace the most honorable form of government ever devised by man.

To everything we know there is a season - a time for sadness, a time for struggle, a time for rebuilding. And now we have reached a time for hope. This young century will be liberty's century. By promoting liberty abroad, we will build a safer world. ... Like generations before us, we have a calling from beyond the stars to stand for freedom.

There is only one force of history that can break the reign of hatred and resentment, and expose the pretensions of tyrants, and reward the hopes of the decent and tolerant, and that is the force of human freedom. We are led, by events and common sense, to one conclusion: The survival of liberty in our land increasingly depends on the success of liberty in other lands. The best hope for peace in our world is the expansion of freedom in all the world.

Now it is the urgent requirement of our nation's security, and the calling of our time. So it is the policy of the United States to seek and support the growth of democratic movements and institutions in every nation and culture, with the ultimate goal of ending tyranny in our world.

Our country has accepted obligations that are difficult to fulfill, and would be dishonorable to abandon. Yet because we have acted in the great liberating tradition of this nation, tens of millions have achieved their freedom. And as hope kindles hope, millions more will find it. By our efforts, we have lit a fire as well - a fire in the minds of men. It warms those who feel its power, it burns those who fight its progress, and one day this untamed fire of freedom will reach the darkest corners of our world.

America, in this young century, proclaims liberty throughout all the world, and to all the inhabitants thereof. Renewed in our strength - tested, but not weary - we are ready for the greatest achievements in the history of freedom.

The militants believe that controlling one country will rally the Muslim masses, enabling them to overthrow all moderate governments in the region, and establish a radical Islamic empire that spans from Spain to Indonesia. With greater economic and military and political power, the terrorists would be able to advance their stated agenda: to develop weapons of mass destruction, to destroy Israel, to intimidate Europe, to assault the American people, and to blackmail our government into isolation.

Some might be tempted to dismiss these goals as fanatical or extreme. Well, they are fanatical and extreme - and they should not be dismissed. Our enemy is utterly committed. As Zarqawi has vowed, "We will either achieve victory over the human race or we will pass to the eternal life." And the civilized world knows very well that other fanatics in history, from Hitler to Stalin to Pol Pot, consumed whole nations in war and genocide before leaving the stage of history. Evil men, obsessed with ambition and unburdened by conscience, must be taken very seriously - and we must stop them before their crimes can multiply.

The murderous ideology of the Islamic radicals is the great challenge of our new century. Yet, in many ways, this fight resembles the struggle against communism in the last century. ... We have seen this kind of shameless cruelty before, in the heartless zealotry that led to the gulags, and the Cultural Revolution, and the killing fields.

Like the ideology of communism, our new enemy is dismissive of free peoples, claiming that men and women who live in liberty are weak and decadent. Zarqawi has said that Americans are, quote, "the most cowardly of God's creatures." But let's be clear: It is cowardice that seeks to kill children and the elderly with car bombs, and cuts the throat of a bound captive, and targets worshipers leaving a mosque. It is courage that liberated more than 50 million people. It is courage that keeps an untiring vigil against the enemies of a rising democracy. And it is courage in the cause of freedom that once again will destroy the enemies of freedom.

And whatever lies ahead in the war against this ideology, the outcome is not in doubt: Those who despise freedom and progress have condemned themselves to isolation, decline, and collapse. Because free peoples believe in the future, free peoples will own the future.

Some observers also claim that America would be better off by cutting our losses and leaving Iraq now. ... There's always a temptation, in the middle of a long struggle, to seek the quiet life, to escape the duties and problems of the world, and to hope the enemy grows weary of fanaticism and tired of murder. This would be a pleasant world, but it's not the world we live in. The enemy is never tired, never sated, never content with yesterday's brutality. This enemy considers every retreat of the civilized world as an invitation to greater violence. In Iraq, there is no peace without victory. We will keep our nerve and we will win that victory.


Obnoxious Iraqi Shia journalist Muntadhar al Zaidi throws shoes at President Bush, Dec 2008.
He (of course) blames Bush for the violence and rapes committed by his fellow Muslims. Anything except blaming the people who actually carried out the violence.

Obnoxious shoe thrower Muntadhar al Zaidi gets shoes thrown at him! Paris, 1 Dec 2009.
The shoes were thrown by "an exiled Iraqi journalist who defended US policy and accused Zaidi of "working for dictatorship in Iraq"." 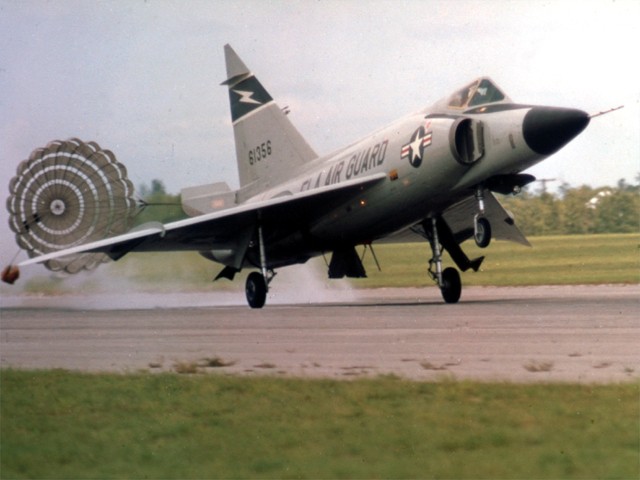 Convair F-102 interceptor.
Image from here.
This military plane has a top speed of Mach 1.25, and a ceiling of 53,000 ft. It is armed with air-to-air missiles, and is capable of carrying nuclear weapons.
The allegedly "stupid" George W. Bush learnt to fly this plane for the US military. Did you? Could you?

In contrast to the idealism of Bush, Obama does not seem to speak much about promoting democracy and human rights around the world. He rarely attacks third world, communist and Muslim regimes for their terrible human rights abuses and oppression.

Why naive young people think Obama is more "idealistic" than Bush is a mystery to me.


What a sad, confused, postmodern muddle Obama is compared to the clarity and wisdom of the great Ronald Reagan. 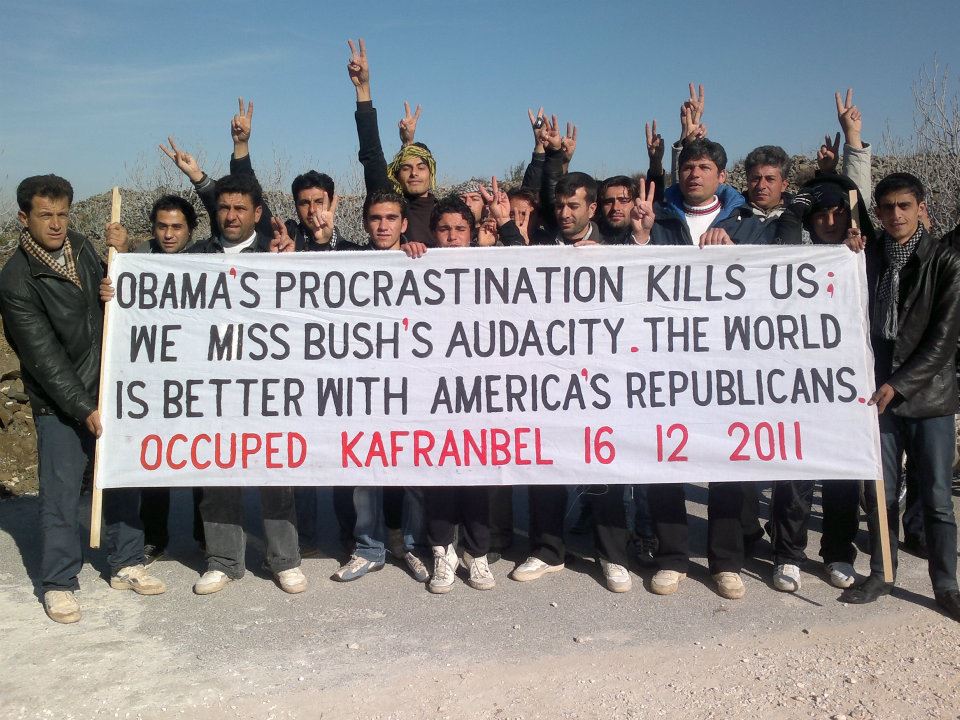 Syrian rebels in Kafranbel hold a banner, Dec 2011, wishing Obama would support their fight, as the butcher Assad slaughters thousands of Syrians to cling on to power.
Assad is a terror-state leader, and enabler of the killing of US troops in Iraq.
But, unfortunately for the Syrians, Obama was in office.