The story of Iraq after 2003 was very depressing. America and Britain got rid of the oppressor of the Iraqi people, and instead of gratefully building a new nation, Iraqi killers began instead to slaughter innocents. Tens of thousands of people, most of them Muslim Iraqi civilians, were killed by hate-filled Sunni and Shia jihadists and totalitarians. It is a true story of shame - not shame on America, but shame on the Iraqis, and on much of the Islamic world that cheered on the killing. It was unbearably depressing that the Iraqis didn't seize perhaps their only chance for freedom in this lifetime. One was at many times inclined to just give up on the Arabs, and say they aren't ready for democracy, and the allies will have to try again in 30 years.

Bush was urged by all sides (left and "realist" right) to give up, to surrender to the Iraqi jihad, civil war and genocide. Leave in humiliation, as in Vietnam. Ensure it was all for nothing.

But Bush did not listen. War is a struggle of will, and Bush "went long" and won the war. It turned out there were a finite number of jihadis willing to kill and die for their evil cause.

Only years of western resolve can do this - and the Democrats must support this resolve.

The war in historical context

The entire War on Islamist Terror has been one of America's smallest ever wars.
From here.

How to win in Iraq II - "Go wide" (destroy the militias, hurt Iran and Syria)

It may be that "going long", staying the course, is not enough, because Bush has simply not engaged with some of his enemies within Iraq (al-Sadr and the Shiite militias) and outside (Iran and Syria).

As long as these hostile enemies can kill, and fund and arm killers, in Iraq with impunity, the violence will never end.

Maybe it is impossible and unrealistic to expect Iraqi freedom to flower in the shadow of the aggressive, unreformed and emboldened terror states of Iran and Syria. These states need to be at the very least deterred.

It is entirely in the interests of the terrorist regimes of Iran and Syria to keep the violence going and keep Iraq in chaos. For if a stable Iraqi democracy emerged, their own people might want the same. So it is no surprise that Iran and Syria are materially supporting both the anti-American jihadi "resistance" and both sides of the Sunni-Shiite sectarian civil war.

Making Iran and Syria pay a price for stoking the violence in Iraq need not mean full-scale war, invasion and regime change. All that needs to be done is to hurt them hard to make them think again about this fight. Put them on the defensive. Bomb cross-border training camps. Sink their ships. Help Israel bomb Iran's nuclear weapons program. Destroy Hezbollah, and support the Lebanon democratic revolution. Put Iran and Syria on the defensive again, as they were in 2003, and press their regimes to the wall.

How 268 Terrorist Groups Worldwide Ended, 1968-2006.
From RAND report, How Terrorist Groups End (2008).
Terrorists, it turns out, are not invincible. 90 percent of terror groups eventually give up in defeat and/or get absorbed into politics. Only 10 percent achieve victory. Religious terrorists like jihadis fare the worst. No religiously motivated group achieved victory in the entire study.
Strange as it may seem, in any given theatre the jihad will eventually give up if it is fought for long enough.
The jihad simply gave up in Algeria, Israel, and now apparently Iraq. All those young fanatic Islamic jihadis died (and killed innocents) for nothing. 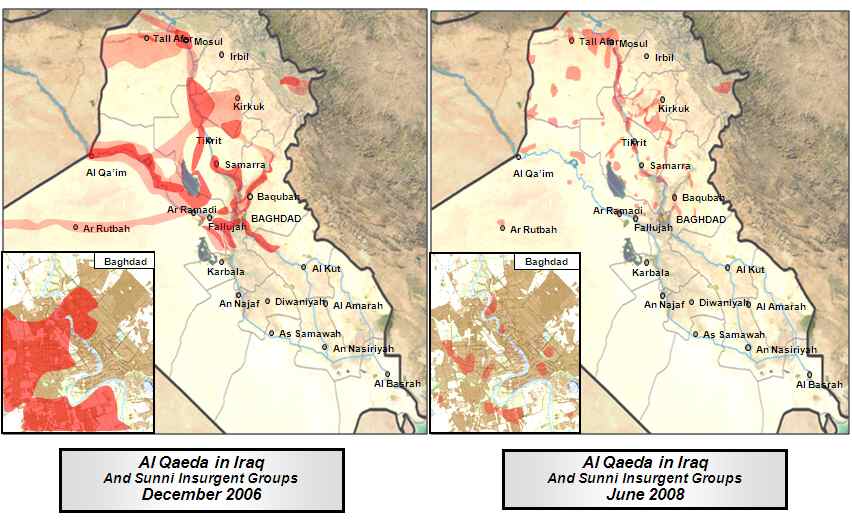 Aymenn Jawad on why the war ended

I'm not quite sure what happened to Aymenn Jawad al-Tamimi since the following debate, but I'll leave this old material up anyway.

"Iraq was rubbish, we did nothing but look at kids. Northern Ireland was boring. Afghan, however, was brilliant: we were fighting every day."
A British soldier, Jan 2010, rather nicely expresses two things:
(1) Allied soldiers are not victims. They joined up to fight.
(2) Iraq is over. The jihad lost. All those jihadis died for nothing. They wasted their lives. The allies won.

Obama throws away victory in Iraq