The left and Islamism - People who let me down - Richard Dawkins

I became a big admirer of Richard Dawkins in the early 1990s. I would regard him - on the topics of religion and science at least - as one of the great living intellectuals.

This page is mainly about Dawkins' politics, which I felt were naive and foolish during the Bush era, but have got much better.


Dawkins points out that religions are memes that spread by replication rather than by logic and truth.
This is why they are geographically distributed.
We all know this is true about religions we don't believe in ourselves. What Christian believes that Islam spread across the Middle East and North Africa due to logic and evidence? Due to Islam being true? Of course not. The idea is absurd. That is not why it spread. And that is not why it is today dominant in those geographic regions.

So, on to Dawkins' politics.

Dawkins comes from a Guardian-reading, liberal-left background. The same background I come from. But whereas I changed after 9/11, Dawkins did not.

His writing in the Bush era of 2001-08 is classic left-wing doctrine. Hostility to Bush, right-wingers, America and Israel. Lack of outrage at the global Islamic jihad. No great desire to see it defeated.

The left loved Dawkins in this era, and I was really disappointed by him. I felt there was a war on against Islamic religious fascism and he was not supporting it. I wished he would shut up about politics and stick to religion and science.

After hearing him during the Bush era, I stopped reading Dawkins on politics for many years. I still like his writing on science and religion, but I have been zoning out his politics for a long time.

After Bush, Dawkins did in fact improve in what he said about Islam (see below). But on other topics, crap leftist opinions continued.

Dawkins gets a bit better on Islam

In one area, Dawkins improved later in life. After Bush, his politics relaxed a little. He did not feel the need to stand with Islam against America. Crap leftist opinions continued on many topics. But on Islam, he got a bit better.

After Bush left office, Dawkins started attacking Islam more. And this got him disowned by many on the left. He's a long way from my position. But he is better than his horrible positions in 2001-08.

He has a lot of left-wing nonsense to unlearn about jihad, Israel, and the cause of Islamic terror. He will never quite unlearn it.


Richard Dawkins, Dec 2012, gets religious lunatic Mehdi Hasan to admit he believes Mohammed flew to heaven on a winged horse.
This is the kind of thing that increasingly gets Dawkins called a "racist" and "bigot" by pious, pro-Islam lefties.
Dawkins is a long way from my position. But he is getting better.

Dawkins got into trouble with his fellow leftists for this tweet on 8 Aug 2013, even though it is obviously true.

An incident in 2015 showed how much Dawkins is now being disowned by the left.

In Feb 2015, radical atheist Craig Hicks was charged with killing 3 Muslims at Chapel Hill, North Carolina. His Facebook showed he was a big fan of Richard Dawkins - though also of many other atheist groups, gay rights groups, left-wing media and even the Southern Poverty Law Center. But, for some reason, they all got off scot free, and Richard Dawkins got blamed. As if Dawkins has ever called for terror attacks. The idea is laughable.

It was a dynamic similar to that which blamed Sarah Palin for Tucson and blamed Robert Spencer for Norway. A disgusting lynch mob, spreading a blood libel. 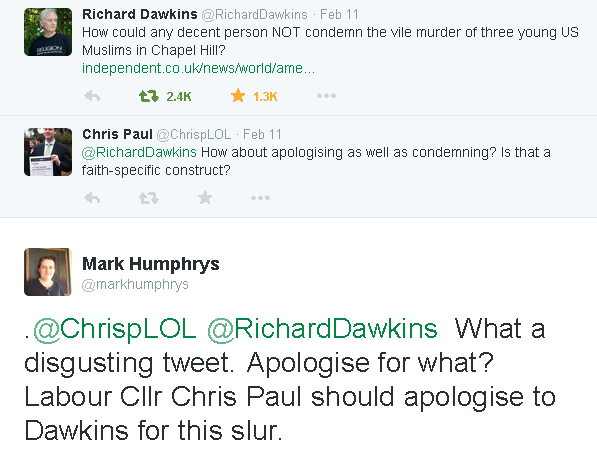 UK Labour Councillor Chris Paul is one of many people trying to link Dawkins to the killings.

Now Dawkins knows how Sarah Palin felt after Tucson and how Robert Spencer felt after Norway.

Good point from here.
The Chapel Hill killer declared on Facebook that he was a fan of gay leftist Rachel Maddow.
In contrast, the Tucson killer never showed the slightest interest in Sarah Palin, and had opposite politics to hers.
But Palin is blamed for Tucson, and Dawkins is blamed for Chapel Hill! 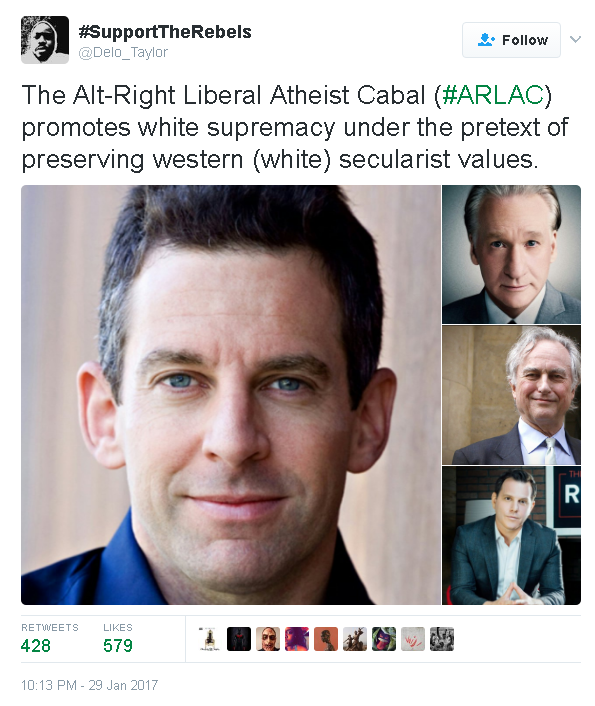 Despite Richard Dawkins' years of service to left-wing nonsense, the left has turned on him because he is now criticising the religion of Islam.

Comedian Andy Kindler provides an example of the abuse that Dawkins now gets from the left.

Comedian Andy Kindler says Dawkins and other left-leaning atheists form a "hate group" because they criticise Islam.
He is not kidding. (Read the thread.)
Andy Kindler now blocks me.