The killing of Muslim mother of five Shaima Alawadi in California in March 2012 was at first blamed on "anti-Muslim hatred". A note was found at the murder scene which read: "GO BACK TO YOUR COUNTRY, YOU TERRORIST". Leftists and Islamists, in a storm of abuse, accused the counter-jihad of causing or inspiring the murder. Some leftists even named and blamed specific counterjihad people.

But alas (as many in the counterjihad predicted from the start) it turned out to be an Islamic honour killing. The husband was arrested, and convicted in April 2014. 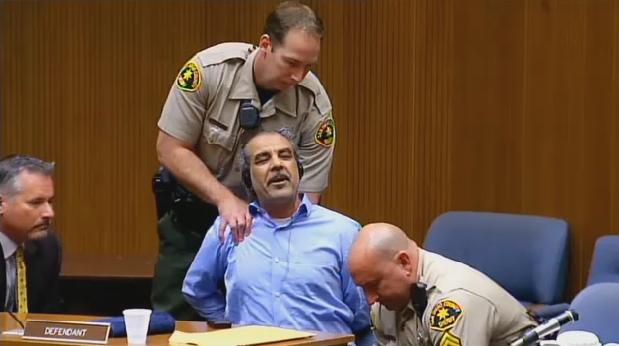 They got the guy who did it.
Click through to see video of verdict.

This story has everything

This story has everything:

Leftists and Islamists blame the counterjihad 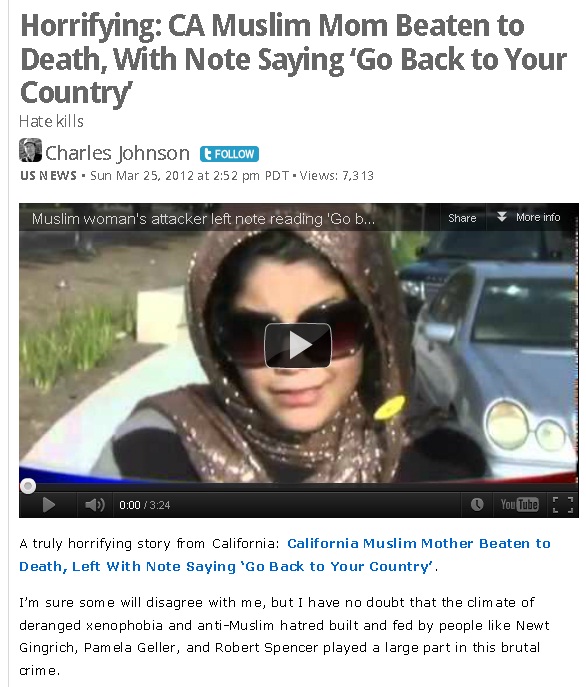 Leftist Charles Johnson, 25 Mar 2012, goes straight to blaming Robert Spencer for the killing.
He is unable to produce any actual calls for killing from Robert Spencer.
Simply the declaration of Charles Johnson makes it so.
This was a particularly unfortunate choice by Johnson, since this turned out to be an Islamic honour killing.

The anti-American, anti-Israel "rightist" Justin Raimondo of antiwar.com blames Robert Spencer and others on the right.
But in fact, it was an Islamic honour killing.
He later realises he was wrong. (Jump to "NOTES IN THE MARGIN".) 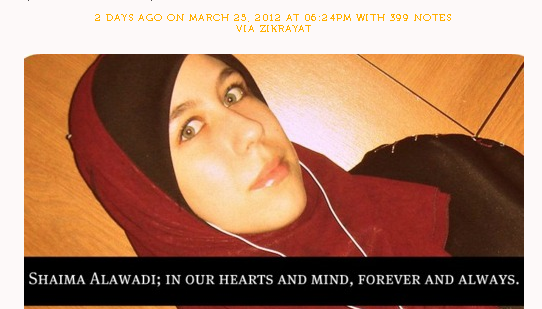 A site called "The Beauty of Islam" wants to show "the true beauty of Islam".
They make the error of covering this story.
Given that this involves an Islamic child marriage and an Islamic honour killing, I don't think these kind of stories reflect well on Islam.

The tags on the story on the anti-anti-jihad site Loonwatch.
"Islamophobia" is one of the tags. But the more accurate "Honour killing" is missing. 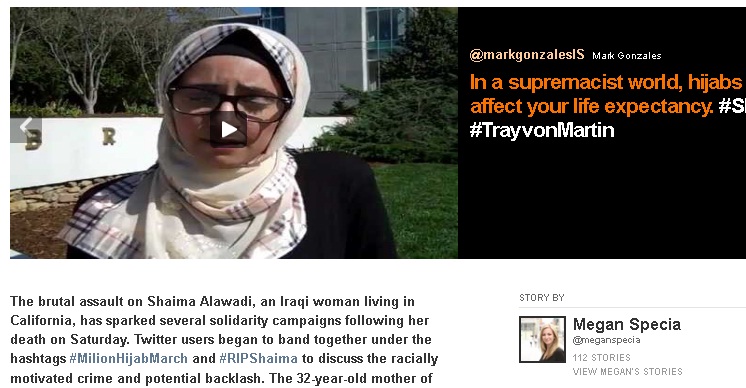 Irish site Storyful, 27 Mar 2012, covers the story, claiming it is a hate crime, and sympathetic to lots of ignorant tweets attacking America.
No alternative view is presented.
Do they plan to now cover the fact that this was all rubbish and it was an Islamic honour killing?

Even after the counterjihad was proved right, the left still attacks them as ignorant.
New information soon emerged casting doubt on the original story.
I'm not sure what Arun Gupta's point is in this article of 7 Apr 2012.
For some reason, he seems angry that Spencer and Geller called this one right.
Instead of applauding them, he sneers at them.
In the face of an honour killing, he still seems to have no interest in honour killings, but prefers to continue to track some imaginary "rise in Islamophobia".
In fact, the term "honour killing" never even appears in his article except when he is sneering at the right. 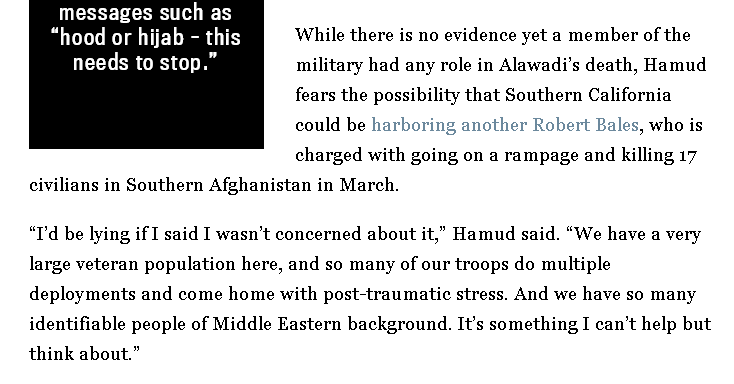 An alternative to blaming the counterjihad:
The Daily Beast, 1 Apr 2012, smeared America's military veterans as perhaps responsible for the killing.
They sympathetically quote the smears of activist lawyer Randy Hamud.
But it turned out to be an Islamic honour killing.

Anti-counterjihadist Reza Aslan specialises in smearing critics of Islam. He is no reformer. He is in fact part of the problem.

Reza Aslan issues a tweet in March 2012 saying counterjihadist Robert Spencer is to blame for the killing of Shaima Alawadi.
In fact, it was an Islamic honour killing. 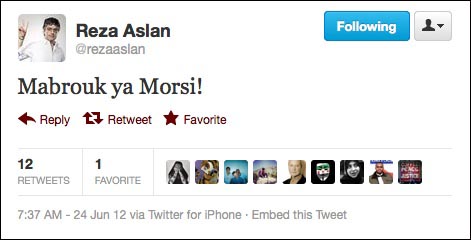 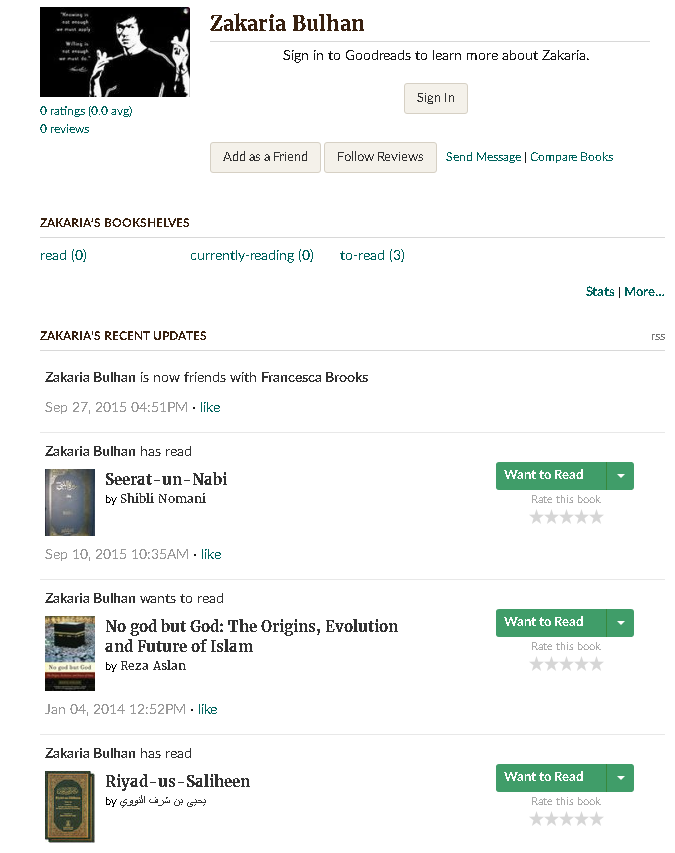 In Aug 2016, a Somali Muslim, Zakaria Bulhan, killed an American tourist in Russell Square, London, when he attacked random people.
It is unconfirmed, but it appears that the above Goodreads account belongs to Zakaria Bulhan.
He recommends a devotional book by Reza Aslan. 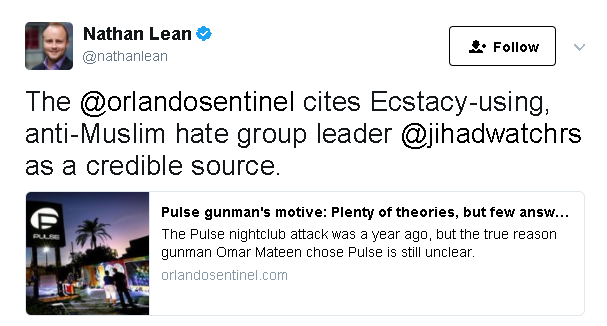 Nathan Lean laughs at the left-wing poison attack on Robert Spencer that put him in hospital in 2017.
Spencer describes Lean as "the most hate-filled human being I have ever encountered". 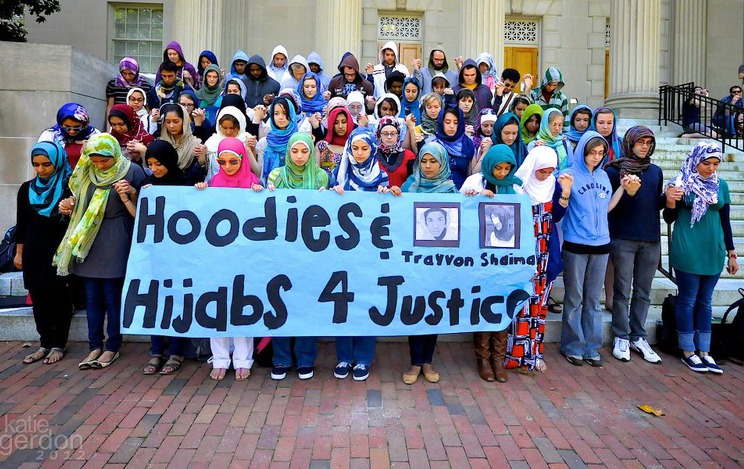 Idiot students at UNC Chapel Hill on 29 Mar 2012 react to the Trayvon Martin case ("Killed for wearing a hoodie!") and the Shaima Alawadi case. ("Killed for wearing the hijab!") One obvious question the above photo raises but that will never be answered: What would the families of the above women do to them if they didn't wear the hijab? 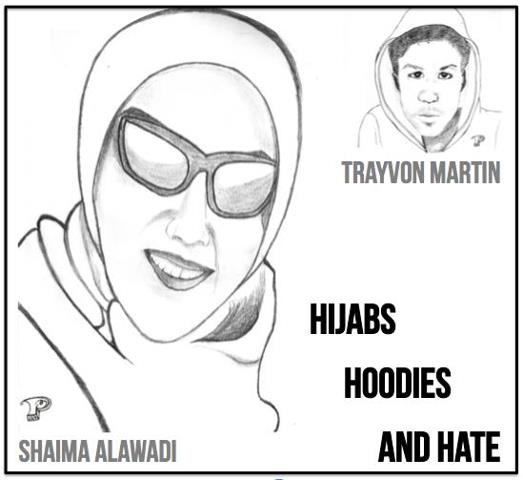 The stupid is deep.
From here. 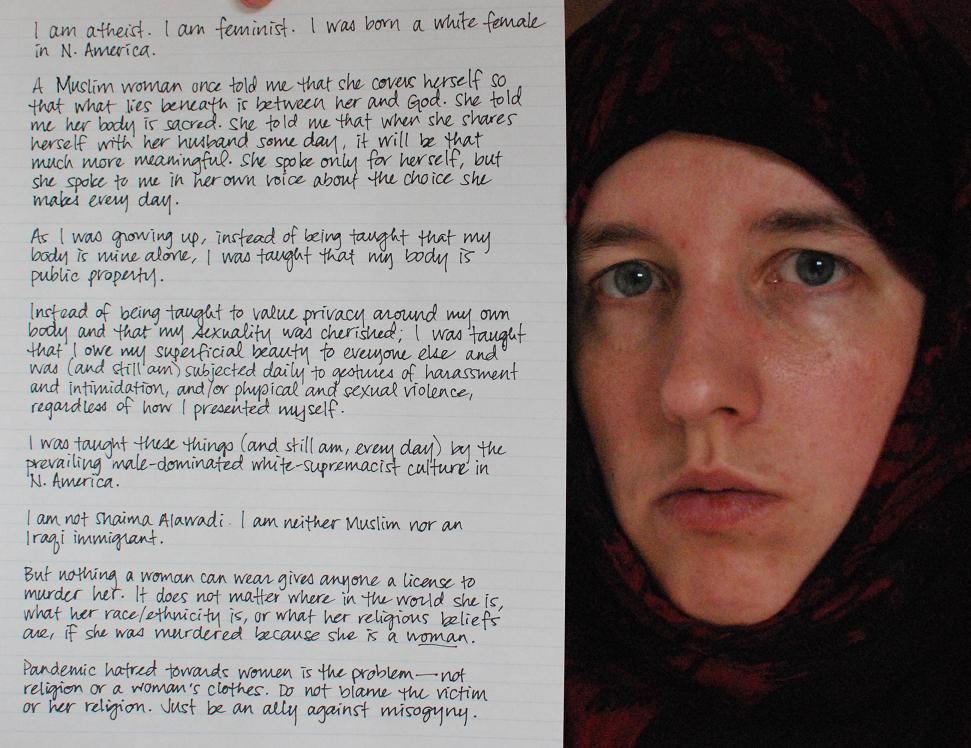 A bizarre jumble that I found here shows the inability of many westerners to defend women oppressed by Islam.
The man is expressing solidarity with Islam, which forces women to dress like this.
"Pandemic hatred towards women" is indeed a problem. But westerners like this will not criticise Islam for spreading such ideas for 1,400 years. They will not criticise Islam for oppressing women, treating them as a man's property, and forcing them to wear Islamic dress. 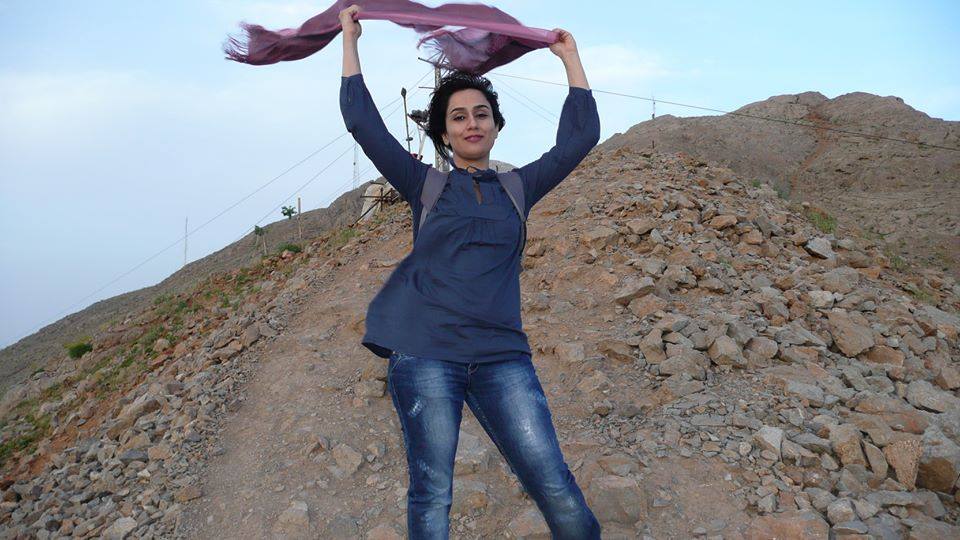 Iranian women post photos of themselves free of their head scarves.
Unlike the leftie western fools above, they know what the hijab really means (oppression).
From here on "My Stealthy Freedom".

Sara Azmeh Rasmussen burns the hijab, International Womens Day, Oslo, Norway, 2009.
Unlike the leftie fools above, she knows what the hijab means.