Islamism - The Islamist way of war - The Boston bombings

Islamism is an ideology of slaughter, and it will never stop producing young men like the Boston bombers, the Toulouse butcher, the Times Square bomber and the London bombers. New ones are being made every day. Islamist terror attacks on the West will never end, until Islamism ends.

The anti-counterjihadist Aziz Poonawalla attacks Robert Spencer on 15 Apr 2013 for calling Boston a probable jihad attack.
"despicable ... filth"
Of course, Spencer turned out to be right. It was a jihad attack. 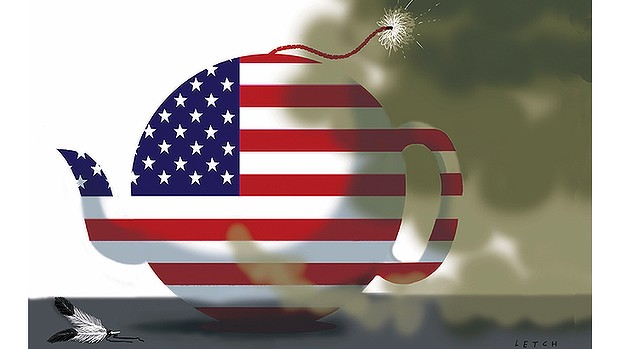 The Sydney Morning Herald was so confident that the Tea Party did the Boston bombings that they ran this image on 19 Apr 2013.
Illustration by Simon Letch.
The Tea Party, of course, have never bombed anyone. 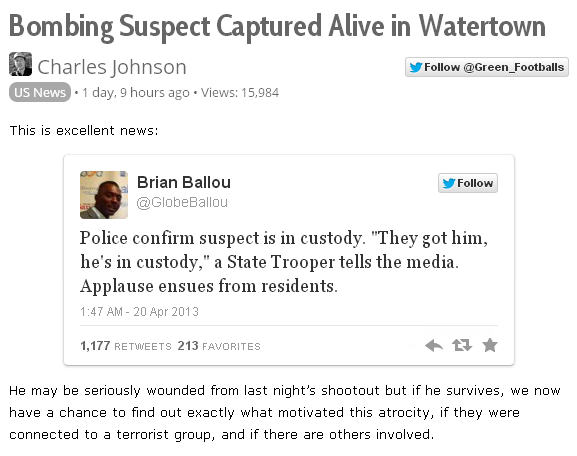 The sad decline of Charles Johnson:
Long after news emerged that the Boston bombers were jihadis, far leftist Charles Johnson says, 19 Apr 2013, after the capture of the younger bomber: "we now have a chance to find out exactly what motivated this atrocity".
On 20 Apr 2013 he is still baffled as to why these young men bombed innocents in Boston: "the latest information suggests that Islamism may not have been their primary motivation."
How the old Charles Johnson would have laughed at this fool!

Lunatic leftist Glenn Greenwald, 21 Apr 2013, also has no clue as to the Boston jihadists' motive.
He has no interest in their support for jihad on social media. He is holding out for something that fits his world view.

Lee Stranahan says we may never know the answer.
Charles Johnson and Glenn Greenwald will never solve this baffling mystery.

After the capture of the last bomber, President Obama gives an entire speech about the bombings without mentioning Islam, 19 Apr 2013.
Typical evasion from this guy.

Many people warned that the Islamic Society of Boston would radicalise Boston-area Muslims.
No one listened.
From Americans for Peace and Tolerance (see youtube), who have a lot more on the Boston mosque.
See more on the mosque.

The Boston bombing should cause a debate on immigration. 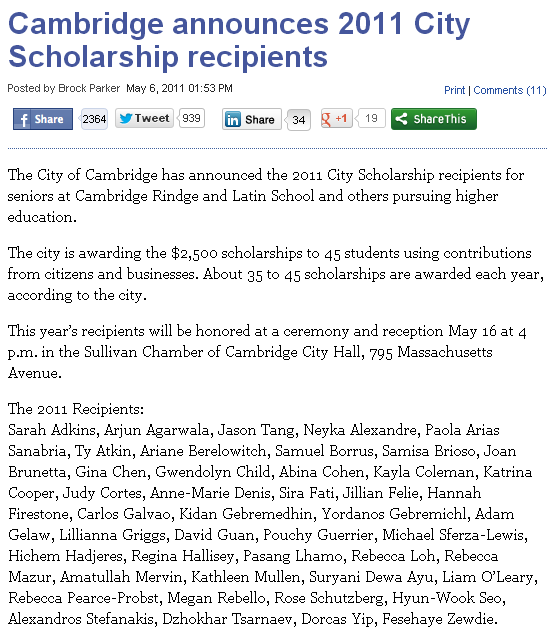 The execution of Dzhokhar Tsarnaev


Dzhokhar Tsarnaev in prison in July 2013. 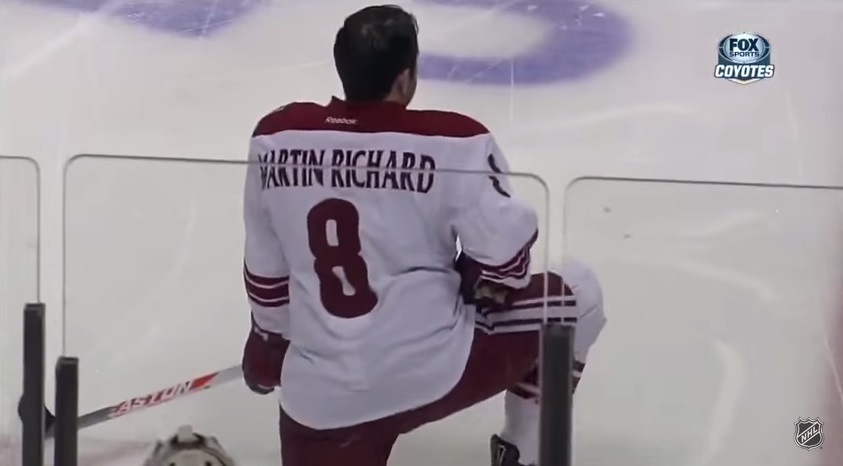 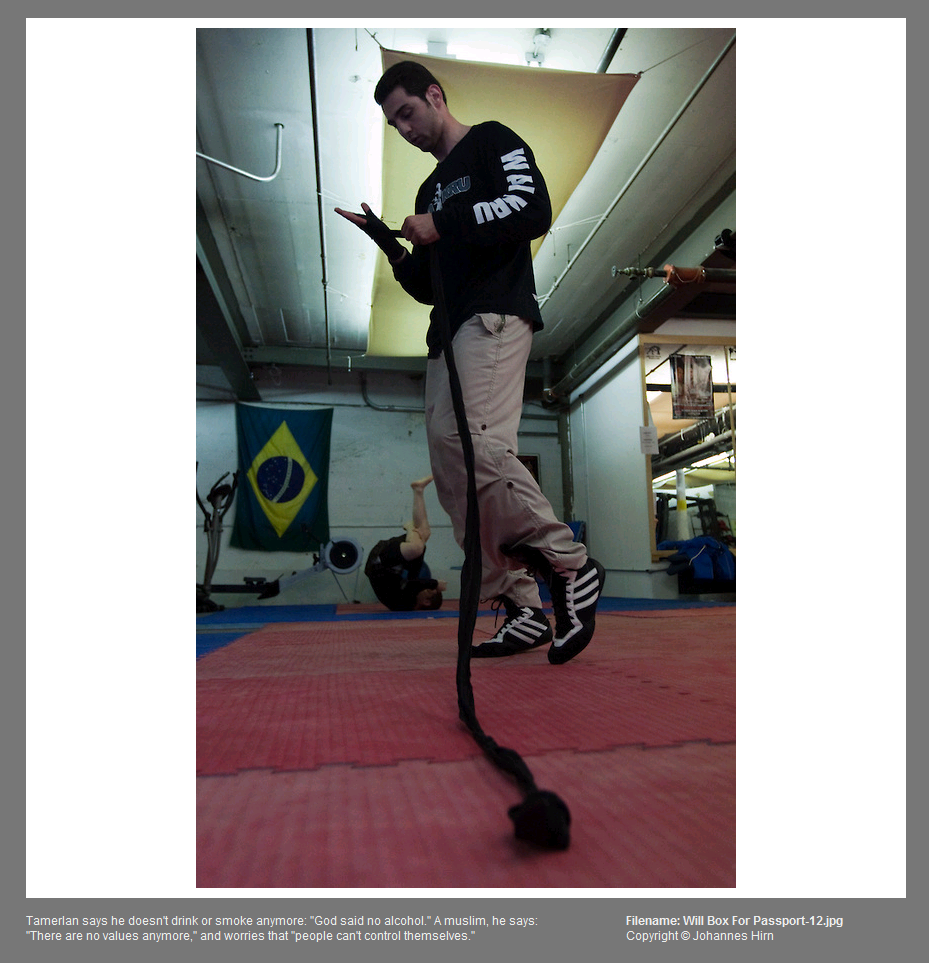 "There are no values anymore", said Tamerlan Tsarnaev, as he killed an 8 year old boy and blew the leg off a 6 year old girl.
This Chechen Muslim immigrant had trouble adapting to the West. He dated a Western girl, but also complained about Western culture.
So he bombed innocents at the Boston Marathon in Apr 2013, killing three and horribly wounding many more.
He lived off the taxpayer, as did his parents and brother.
He was not "oppressed" or discriminated against. He killed because of the demons in his head, not any other root cause. He killed because of Islamism, not any other root cause.
Photo formerly here. See full size. 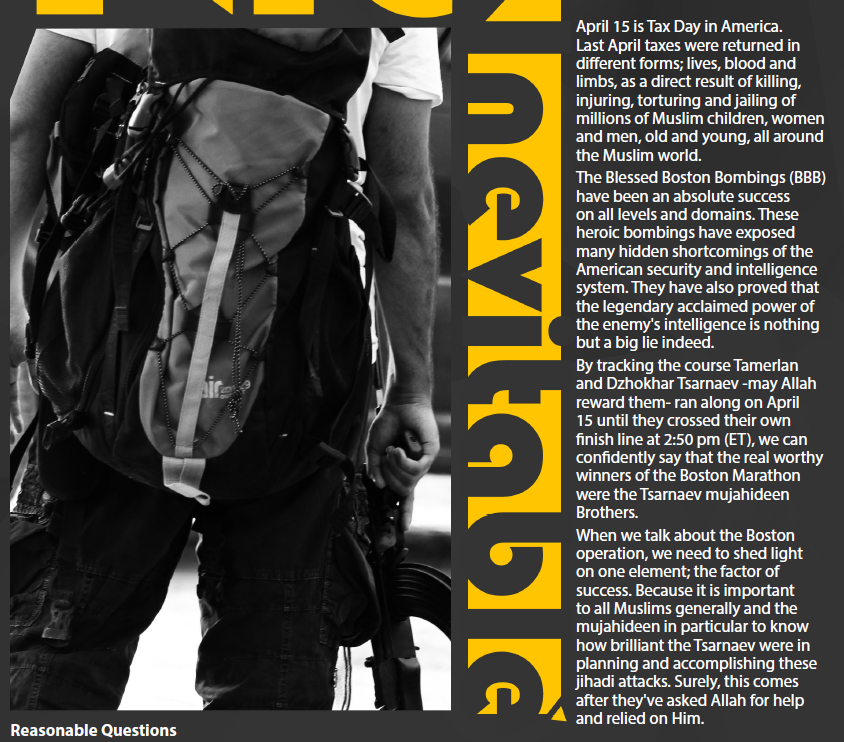 Al Qaeda's Inspire magazine (issue 11) celebrates the Boston bombings.
It describes them as "The Blessed Boston Bombings ... These heroic bombings".
Al Qaeda are delighted about the dead kuffar: "The Tsarnaevs made an excellent choice of placing IEDs. The first one was near the finish line where large crowds cheer from, reporters and media cameras gather to capture the final steps. The second one exploded 50 -100 yards away and 13 seconds later from the first one. It was also in the opposite direction of the racers, the direction the crowd is expected to run in reaction to the first explosion. It was definitely a smart plan to increase casualties among the kuffar, by putting them under a temporary siege by two sequential blasts."
See The Islamist way of war.

"One minute he's this funny, normal guy who liked boxing and having fun, the next he is praying four times a day, watching Islamic videos and talking insane nonsense."
A girlfriend of Tamerlan Tsarnaev beautifully sums up how the "insane nonsense" of Islamism took over his brain.

"They think that they are killing us and they celebrate this, but we are the ones who will rejoice when Allah grants us the chance to behold them in the flames of an eternal and terrifying fire, an otherworldly flame."
- The mother of the Tsarnaev brothers, May 2015, after her son was sentenced to death.