There is less freedom of thought, freedom of speech and freedom of religion in Islam than in any other religion.

Hopefully, in the next few decades, this will finally change. 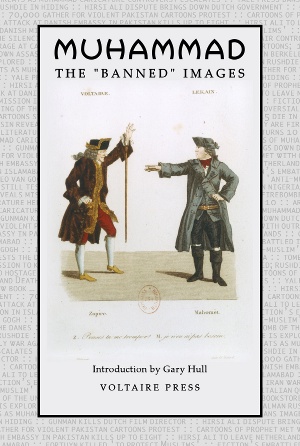 The book Muhammad: The "Banned" Images (and here) (2009) shows the challenge of free speech to Islam this century.
The Internet and globalisation represent the first serious intellectual challenge Islam has ever faced in its history (because previously it killed or silenced all critics).
Belief in Islam will falter in this century once young Muslims hear, for the first time ever, alternative ideas while they are growing up. 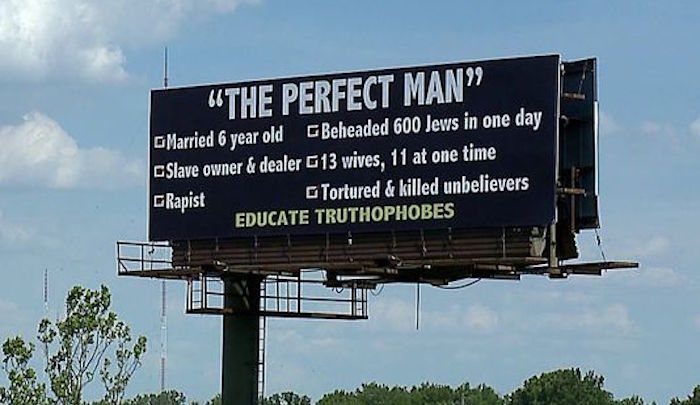 Welcome to the land of free speech: This billboard caused controversy when it was erected in Indianapolis in June 2017.
It is certainly rude about Muhammad, but is anything on it actually false?
Robert Spencer and Hugh Fitzgerald explain in detail why the statements are true, citing the Islamic texts.
In the modern world, these challenges to Islam will occur again and again, and they cannot just be whitewashed away.

Egyptian cleric Mazen Al-Sarsawi, Jan 2011, openly says that Muslims are not allowed to leave Islam.
From MEMRI. See transcript.
"God says that there is no coercion in Islam. One is free to be a believer or an infidel. That is the starting point, but is someone who converted to Islam allowed to change his mind? No, he is not. ... That is a completely different story. Someone who converted and got a taste of the perfection of Islam is not allowed to leave the fold of Islam whenever he feels like it."

Yusuf Al-Qaradawi calls for the killing of apostates. 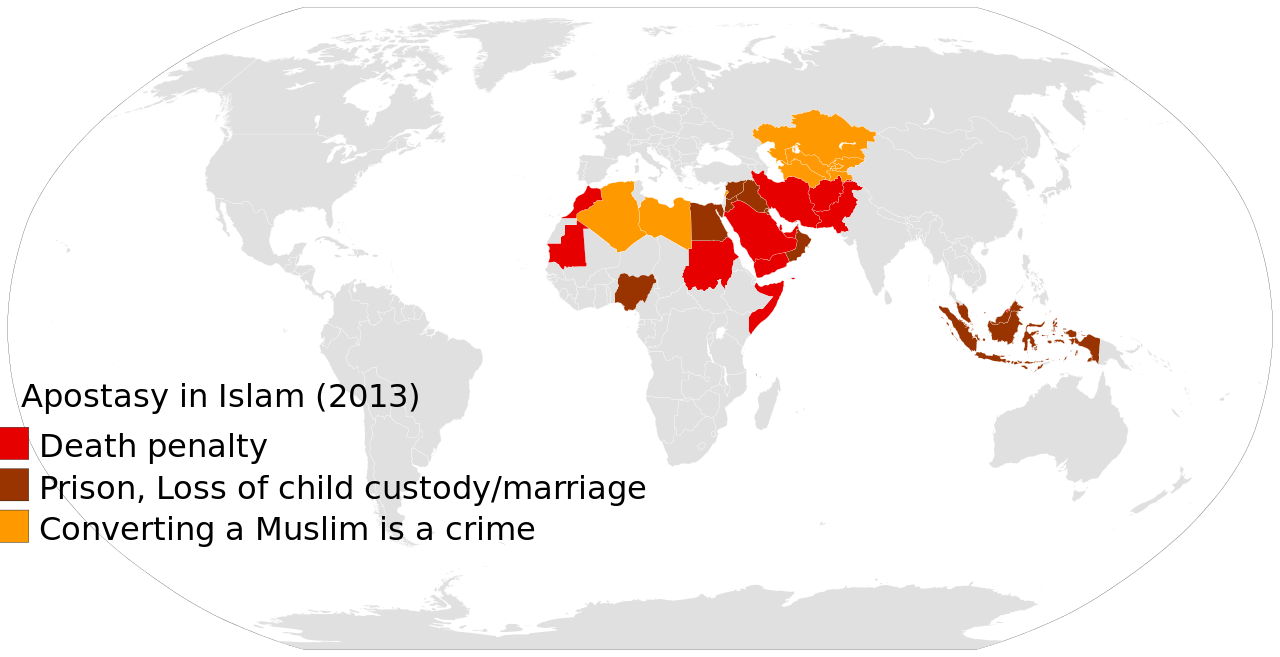 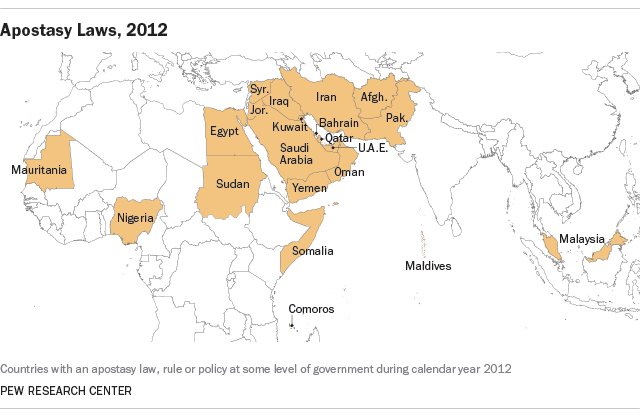 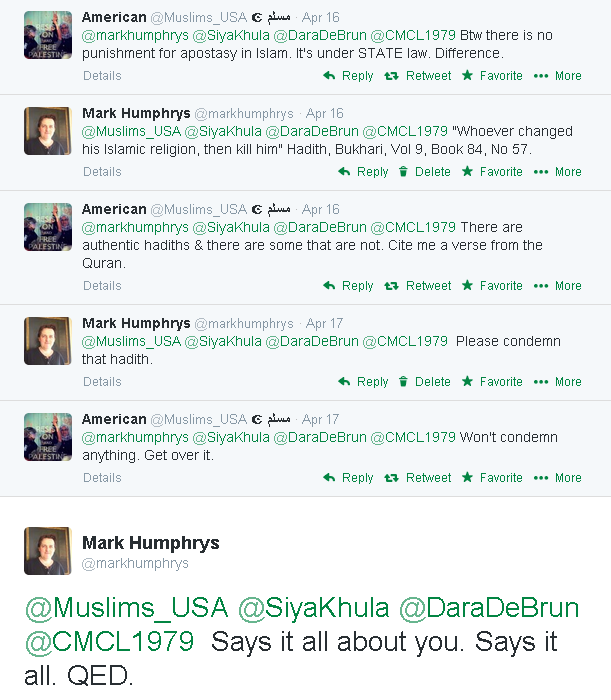 I try to get some "moderate" Muslims to condemn the hadith calling for death for apostates.
No luck: "Won't condemn anything. Get over it."
They then blocked me.

From the Hadith by Bukhari at sunnah.com, which re-numbers this as Book 88, Hadith 5.

Some Zanadiqa (atheists) were brought to 'Ali and he burnt them. The news of this event, reached Ibn 'Abbas who said, "If I had been in his place, I would not have burnt them, as Allah's Apostle forbade it, saying, 'Do not punish anybody with Allah's punishment (fire).' I would have killed them according to the statement of Allah's Apostle, 'Whoever changed his Islamic religion, then kill him.'"
- The Hadith, Sahih al-Bukhari, Volume 9, Book 84, Number 57. Search for more.


Taslima Nasrin attacked by Muslim religious maniacs in India in 2007.


Nonie Darwish on CBN.
She makes the point that the global Islamic jihad has a dynamic of its own, and wars with free peoples because it must, not because of anything the free peoples have done.
"There's something every American must understand, after 9/11 especially. There is nothing that America has or has not done that causes terrorism."

Bukhari's hadiths, 9th century:
My prophet Muhammad married a 6 year old and had sex with a 9 year old. What a dude!

European Court of Human Rights, Oct 2018:
It should be illegal to say what Bukhari said but with a disapproving voice. 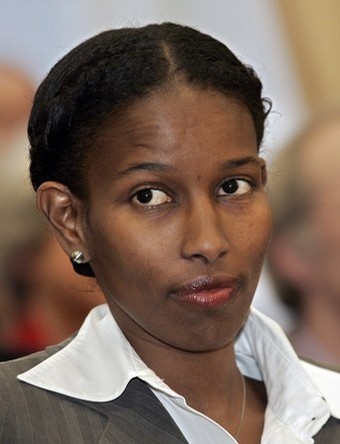 "The western cultural relativists, who flinch from criticising Muhammad for fear of offending Muslims, rob Muslims of an opportunity to review their own moral values. ... this attitude betrays Muslim reformers who desperately require the support - and even the physical protection - of their natural allies in the west."
- Ayaan Hirsi Ali. 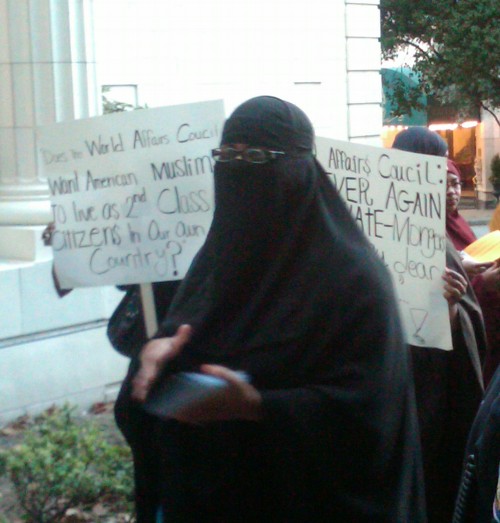 Protesters against Ayaan Hirsi Ali, Seattle, Sept 2010.
On the one hand, someone who believes in and champions the Western Enlightenment. On the other, third world religious nuts from the 7th century AD. Oh, it's so hard to choose.

It is true that Ayaan Hirsi Ali has used language I would not use. But she is basically a western secular liberal, not a would-be totalitarian. See what you make of the following. 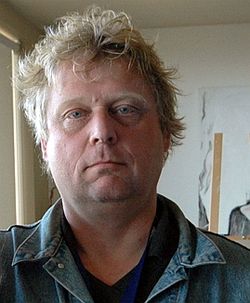 Theo van Gogh was murdered by the jihad in 2004.

Sharia law in Holland: The prosecution of Geert Wilders, 2010-11

I don't agree with Wilders. But making his speech illegal? That is sharia. 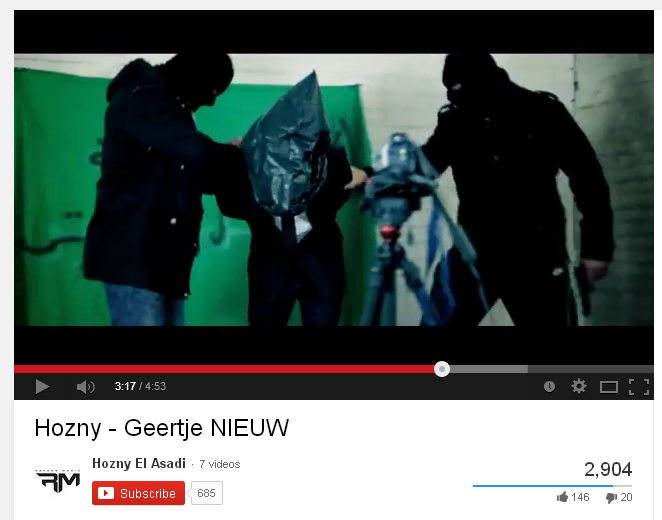 Lebanese-Dutch Islamist rapper Hozny El Asadi makes a video depicting the jihadist execution of Geert Wilders.
Typical of how Islam deals with its critics.
El Asadi should be arrested, stripped of citizenship and deported to the Lebanon.

2015 video by Wilders about the Muhammad cartoons.
Islam needs to grow up and accept this kind of thing. It will be a better religion when it does.

"There are people who claim that democracy is incompatible with Islam. But the truth is that democracies, by definition, make a place for people of religious belief. America is one of the most -- is one of the world's leading democracies, and we're also one of the most religious nations in the world. More than three-quarters of our citizens believe in a higher power. Millions worship every week and pray every day. And they do so without fear of reprisal from the state. In our democracy, we would never punish a person for owning a Koran. We would never issue a death sentence to someone for converting to Islam. Democracy does not threaten Islam or any religion. Democracy is the only system of government that guarantees their protection."
- Speech by President George W. Bush in Egypt, May 2008.

"What is needed from the supporters of this very confident faith is more self-criticism and less self-pity and self-righteousness."
- Christopher Hitchens sums up the problem with Islam.