The Church and Islamism - Christianity on Islam in the past

Christianity on Islam in the past

Yes, I know Christianity's past is itself full of crimes. But, on the issue of Islam at least, I kind of miss the days when Christianity stood up for itself.

Thomas Aquinas talks about the religion of "Mahumete" in Book 1, Chapter 6, of Summa Contra Gentiles (13th century).
From pp.9-10 of 1664 edition (Bordeaux, France). 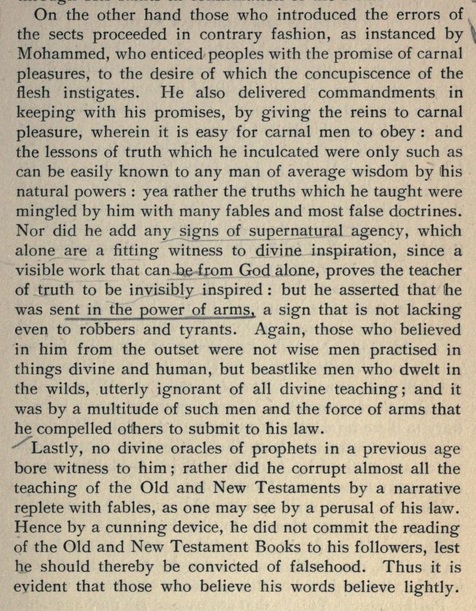 English translation of the above.
From p.13 of 1924 edition. 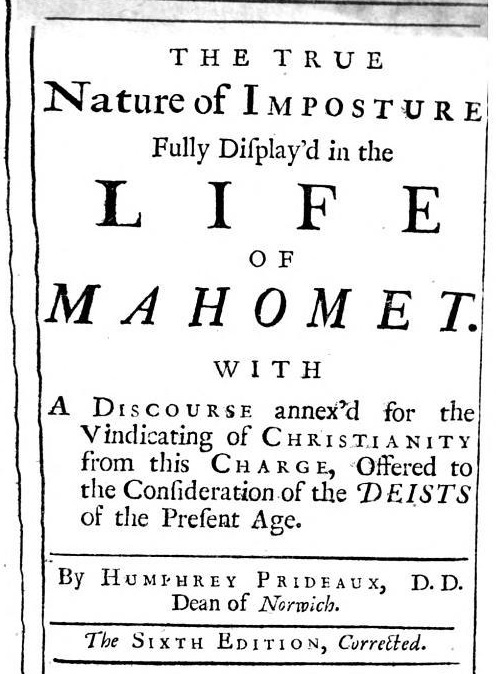 The true nature of imposture fully displayed in the life of Mahomet (1697) by Humphrey Prideaux, Dean of Norwich.
A popular book (many editions).
This is the 6th edn (1716). 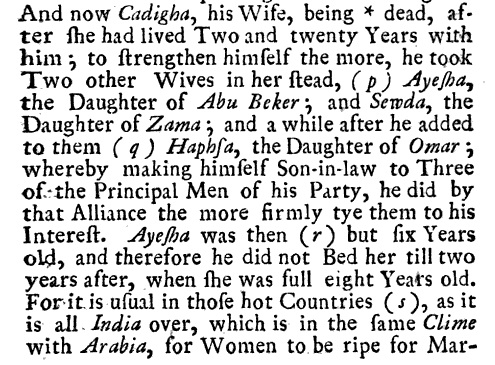 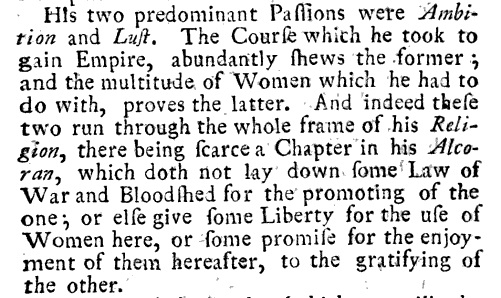 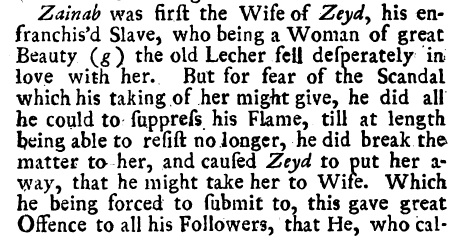 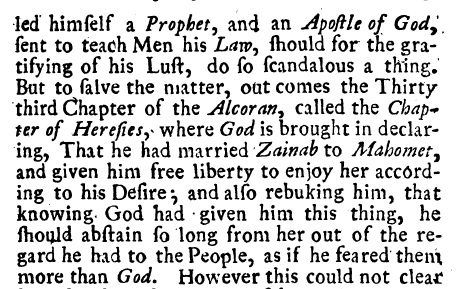 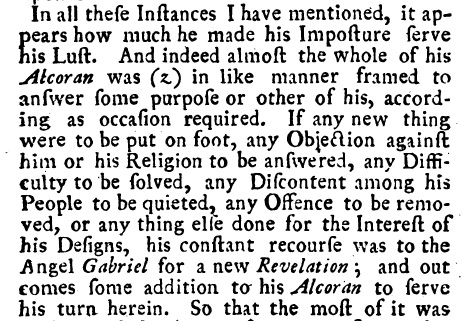 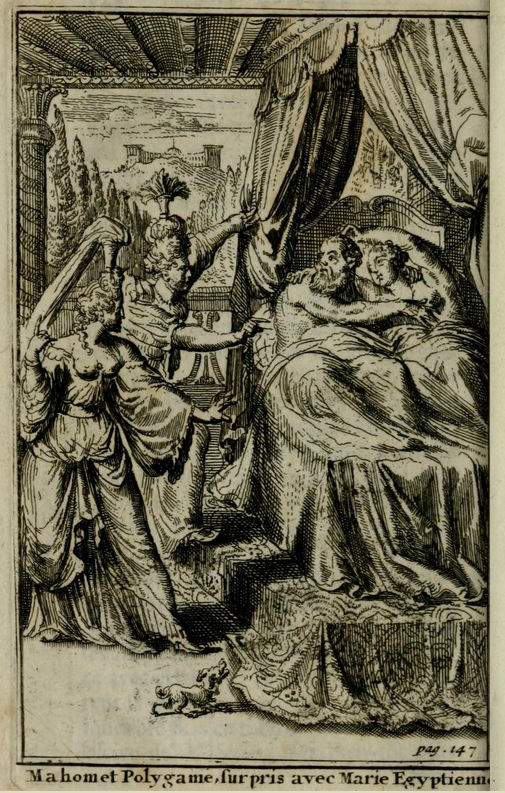 Mahomet's wives discover him in bed with Maria, his 15 year old Christian sex slave.
Illustration opposite p.147 of the 1698 French translation of Prideaux's book. 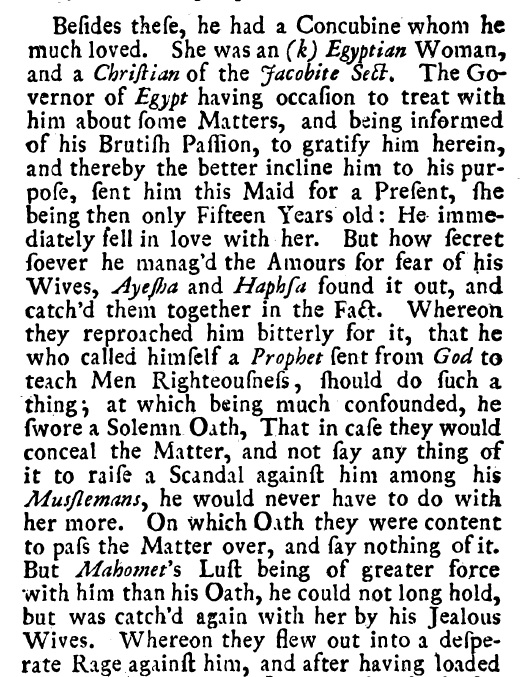 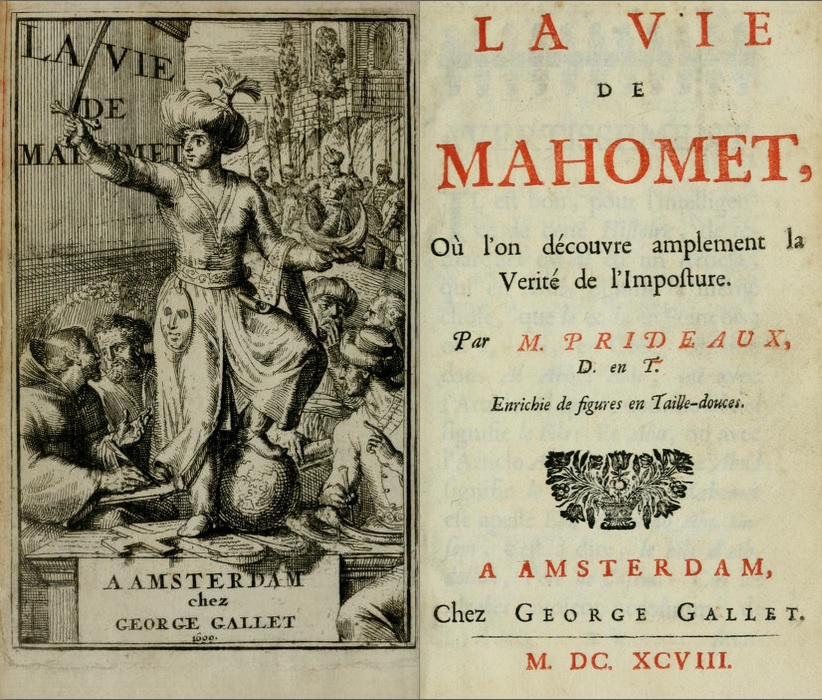 Mahomet wielding a sword and trampling on the cross, the Ten Commandments and the globe.
From the 1698 French translation of Prideaux's book.
Book dated 1698, though drawing has date 1699.

Christian writings in the 18th century and later 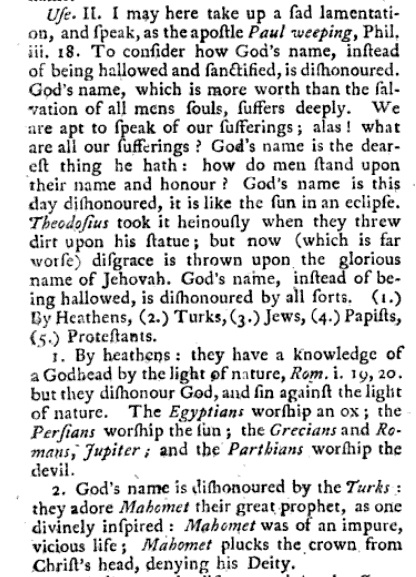 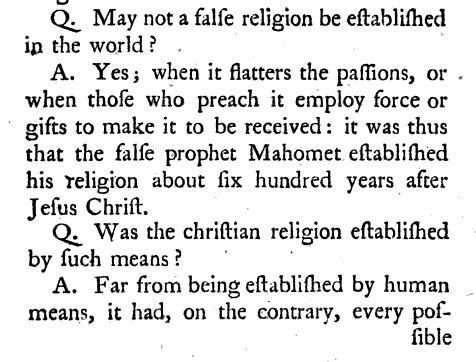 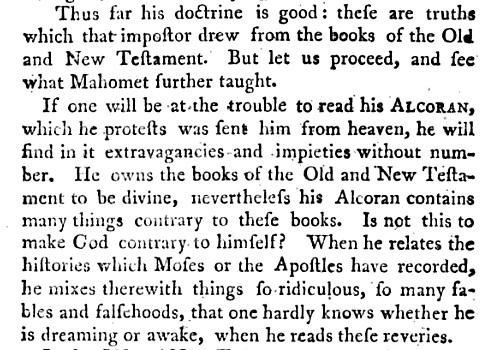 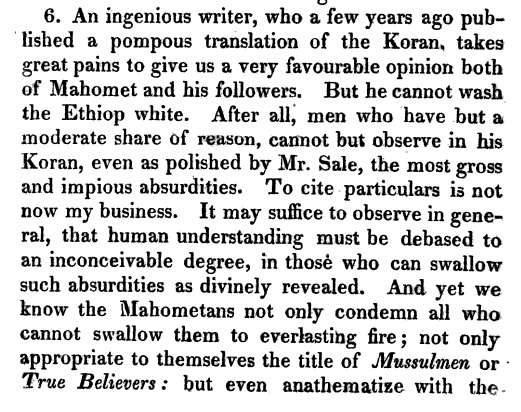 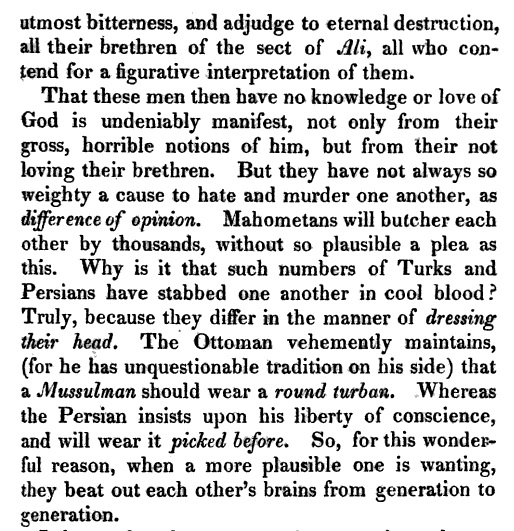 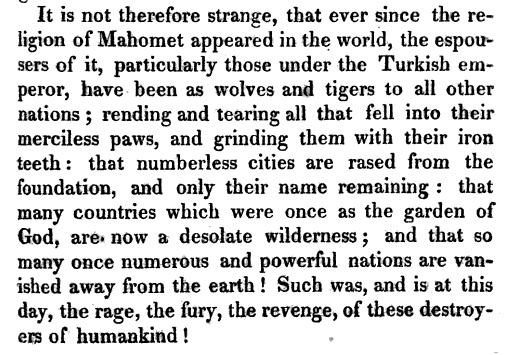 From Pinnock's first catechism for children (1837). 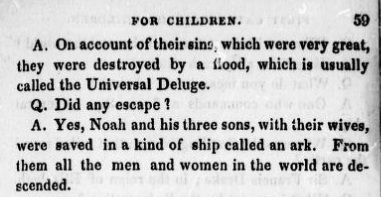 However, not everything in the above makes sense!

From the Catechism of perseverance (1850).
Who would believe that by the 21st century the Catholic church would be complaining about blasphemy against Islam!

Extracts of the entry for MOHAMMEDANISM in vol.10 of The Catholic Encyclopedia (1913).

More from the Catholic Encyclopedia entry of 1913.
It refers to recent atrocities by the Turks.
I think Christianity understood Islam better in this period.

Christianity in the late 20th century started to adopt left-wing narratives on many topics, and as a result has become bizarrely pro-Islam. Modern Christianity seems to understand Islam far less than its ancestors did.

The term used for Muslims has been constantly changing.
Mohammedan: This graph shows the decline of the term "Mohammedan" (various spellings).
This is a search on Google Books Ngram Viewer for the count of various words in scanned Google Books in 1780 to 1945.
The modern term "Muslim" is included to show the decline.
If we extend the graph to 2015, "Mohammedan" vanishes.

Mussulman: Another variant was "Mussulman" (various spellings).
The above is a search in 1780 to 1945.
Again, the modern term "Muslim" is included to show the decline.
If we extend the graph to 2015, "Mussulman" vanishes.

Moslem: The rise of the term "Muslim" is not quite as dramatic as shown above. It used to be spelt "Moslem".
The spelling "Muslim" only became common in the 20th century.
The above is a search in 1780 to 1990.
If we extend the graph to 2015, "Moslem" declines even further. 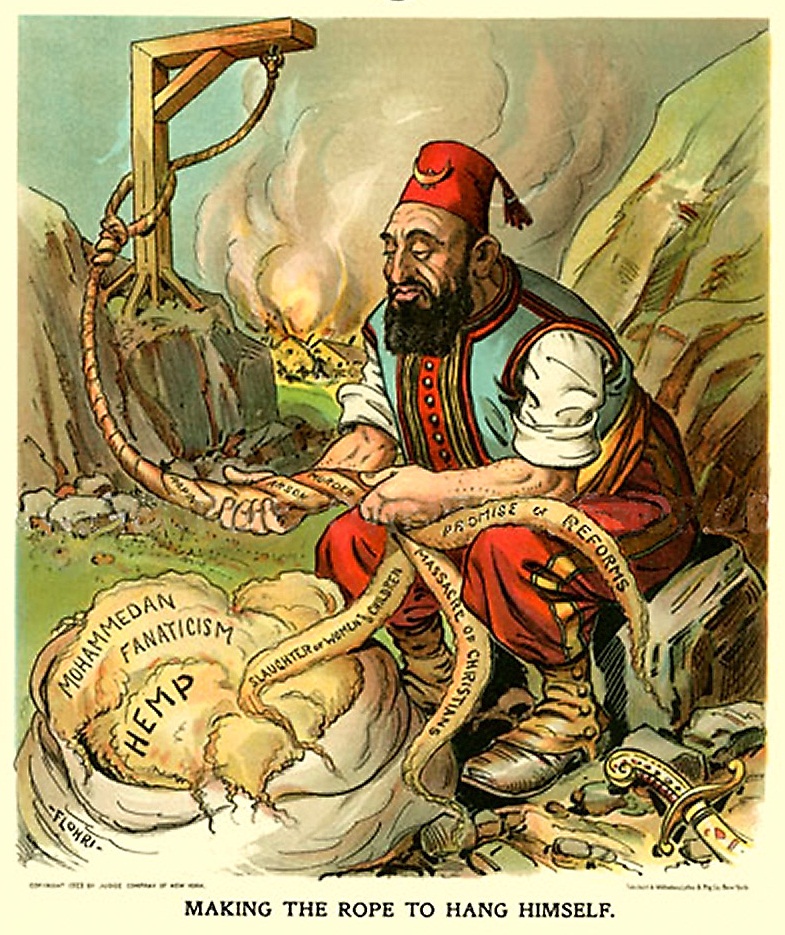 Not a Christian thing, but this 1903 cartoon in New York shows the standard Western view of Turkish oppression and jihad.
Bigotry? Not really. More like a sad prophecy. This is only a short time before the Turkish genocide of Christians began in 1909.
See full size. 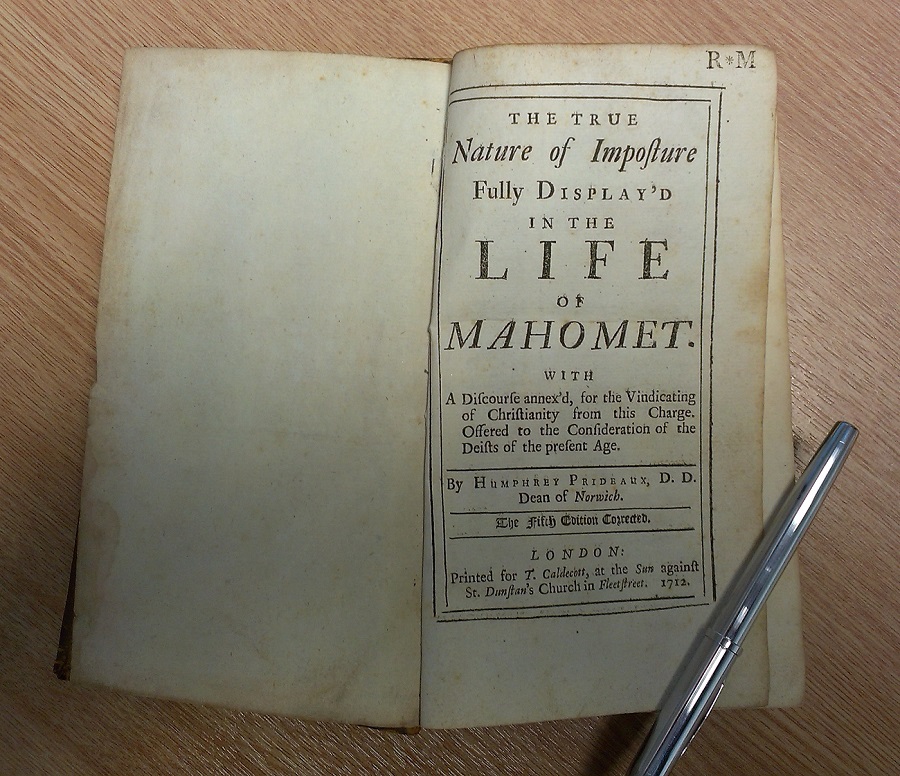 I bought a 1712 edition of Prideaux's Life of Mahomet.
300 years old, and still edgier than any modern newspaper or any modern comedian.
See full size.