The "Wikileaks" video of a 2007 airstrike in Iraq was widely claimed to show a war crime. Wikileaks spun this incident as if it was an attack on civilians.

But then it emerged that there were RPG and AK armed insurgents present, who were tracking a US patrol and taking recon photos. The Wikileaks version of events is false. The US military version is true. Wikileaks has no credibility because of their spin and distortion of this incident. 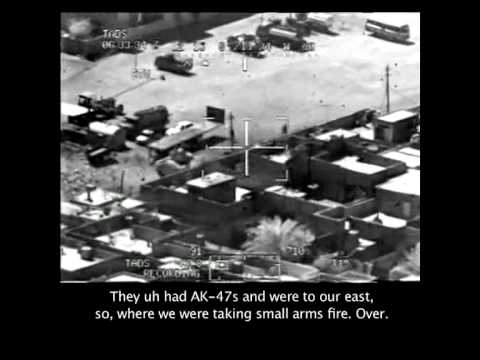 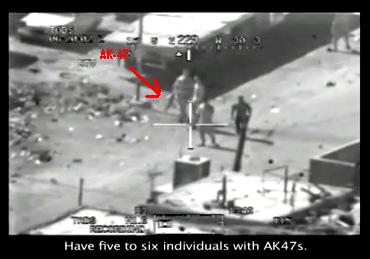 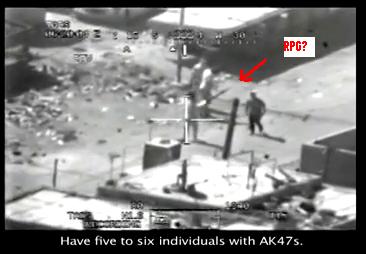 Rusty Shackleford shows the evidence that there were armed men in the group.
Start at 2:03 in the long video,
In the above screenshots, the two journalists (as marked by Wikileaks) have gone off screen, and the group left behind is carrying two long items that look like weapons. They sure look like weapons to me.
The Wikileaks video makes no attempt to explain what these items are. No arrow points to them explaining them. Why not?

Look at the video again, starting at 2:03 in the long video, and this time ignore the journalists when looking at the build-up. Separate to them is a group of armed insurgents, armed with an AK-style rifle and at least one RPG launcher, clearly about to launch an attack on nearby US ground forces. It is obvious why US forces attacked this group. There is nothing illegal about this attack. 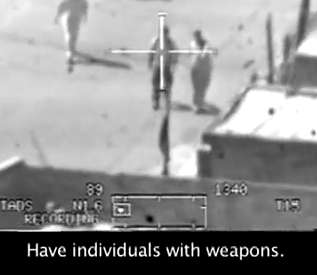 Here, in the reconnaissance phase, the helicopters are 1.3 km away (see range figure of 1340), which is why the insurgents do not notice them.
The helicopters move in closer to shoot.

Jihadi terrorists with AK-style rifle and RPG launcher, clearly about to launch an attack on US ground forces.

It looks like an RPG to me.
If it's not an RPG, then what is it?
From The Jawa Report. 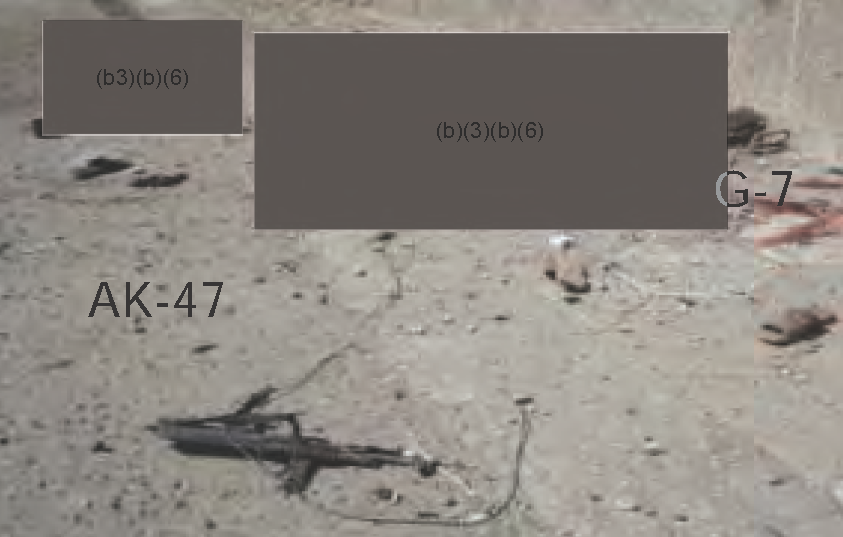 AK-style rifle recovered by US ground troops at the scene.
They also found two RPG launchers, which fits with what we see in the video.
From here. Originally from the official US military report above. 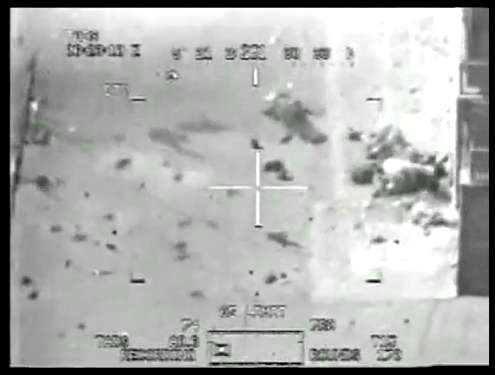 The above AK-style rifle filmed earlier, from the helicopter, after the shooting but before ground forces arrive. At 5:15 in the long video.
Just to show you that it has not been "planted". 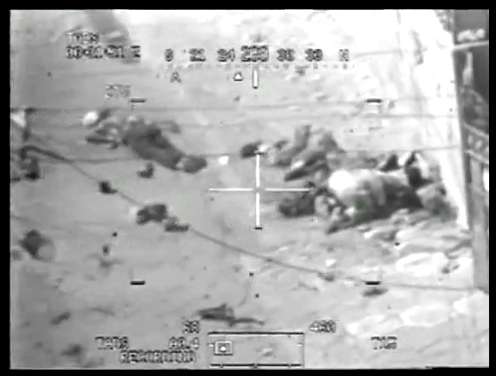 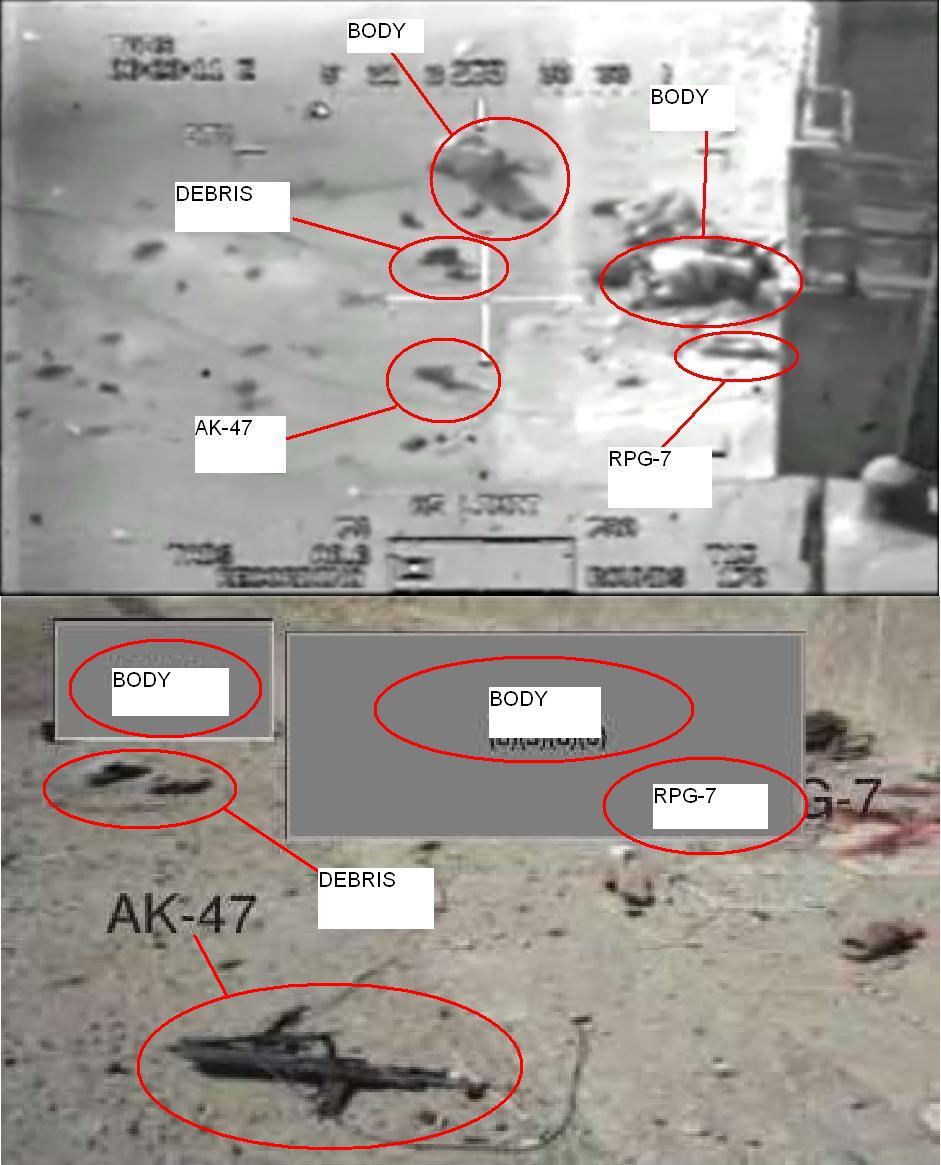 Location of the AK and RPG after the shooting.
From The Jawa Report. 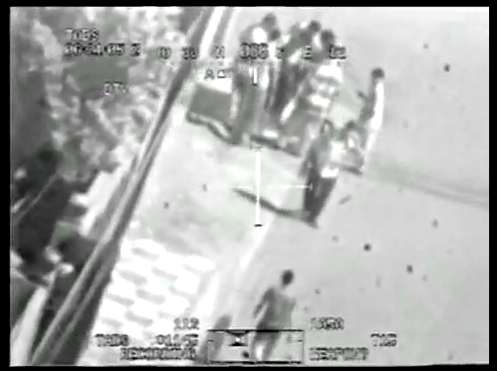 Journalist takes sneak photo around the corner of nearby US forces.
He then shares this photo with the terrorists so they can better plan their attack.
See the terrorists huddled round the camera looking at the photo.
This is at 3:09 in the long video.
It sure looks like the journalists were working for the terrorists. 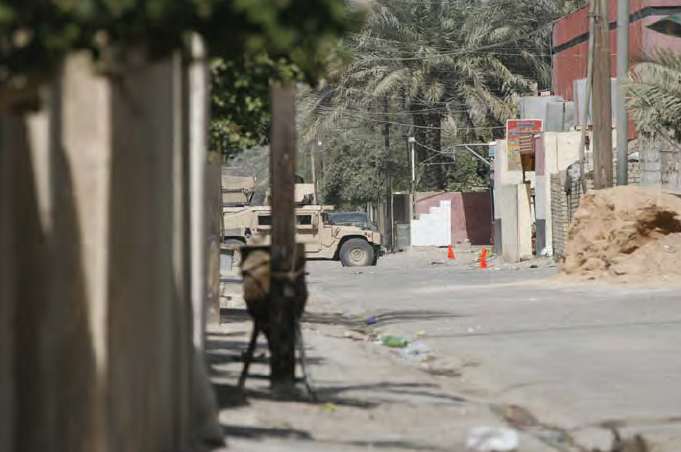 The photo the journalist shared with the terrorists.
It sure looks like this comment from a soldier who was there is true: "the two reporters and armed men supported by a van and cars were shadowing a Coalition patrol. These reporters accompanied the armed men who were tracking a Coalition patrol about a city block away. The camera man would peek around corners to shoot a few digital frames of the patrol and then show the pictures to the armed men. If you have all the video footage, you will see this activity happened repeatedly. The operational suspicion was that this was enemy TTP (tactic, technic, or procedure) to help prepare for an attack; the digital photos would be used to quickly evaluate the target -- to judge what it looked like, its shape, distance, terrain in between, where to aim, etc. This way, the RPG operator would select the right warhead, he'd preset the mechanical sights (elevation), and fix in his mind a visual picture of the target so he would limit his exposure time when stepping out in the street to fire. The recovered camera showed how the camera man was aiding the enemy."

Was the van driver also an insurgent, or just incredibly unlucky? I can't decide. If he was innocent, you can see why the US forces thought otherwise.

Not long earlier, in the sporadic fire fight that morning, at 00:40 in the long video, a van drives through the deserted streets. It pulls up to a mosque and stops.
Bob Owens notes that mosques are "a favored location to hide weapons and militants because of policies that forbid U.S. troops from raiding them".
Is this an insurgent support vehicle? The US forces suspect so, which is why they track it.
Is this then the same van seen shortly afterwards trying to recover wounded insurgents and maybe recover weapons?
This sure looks like evidence that the van driver was an insurgent.

The Irish media prints only the Wikileaks narrative

The Irish media (like most media worldwide) printed only the Wikileaks narrative of the incident. It fitted nicely with the views of many of them about the US military. It was "too good to check".

If you get your news from the Irish media, all you would get is the Wikileaks narrative.

Wikileaks and Julian Assange have lost a lot of credibility over this.

Their clumsy, biased, deceptive editing of the video to fit their political view makes them look like government or opposition spin-doctors, not free speech leakers.


The lie gets half-way round the world:
The trailer for The Fifth Estate (2013) presents the 2007 airstrike as if it was a war crime.