In 2002, as the War against the global jihad exploded, the Anglican church appointed as its head (Archbishop of Canterbury) an annoying, irritating, left-wing, Guardian-reading appeaser.

For a nightmare 10 years, until 2012, Rowan Williams pontificated about Islam, sharia, and anything else he found in The Guardian over breakfast, giving us the wisdom of his boilerplate left-wing opinions.

Rowan Williams is the great dhimmi of the modern age. For 10 years he was the symbol of Christianity's moral blindness, decline and surrender to Islam. The most annoying man in Britain. Britain's greatest idiot. He was all that, and more. 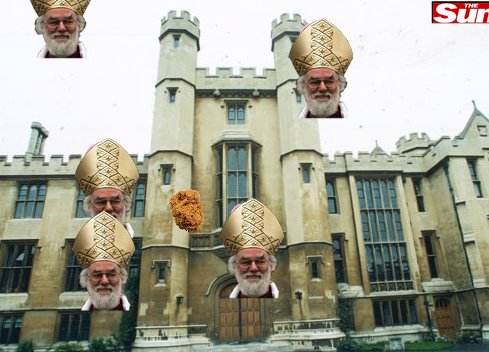 Online game - Bash the Bishop! (With a sponge)
"A game to relieve you of your Sharia stress".
From The Sun. They may be a dumbed-down tabloid, but they sure know what we all feel like doing every time we see that idiot Rowan Williams. 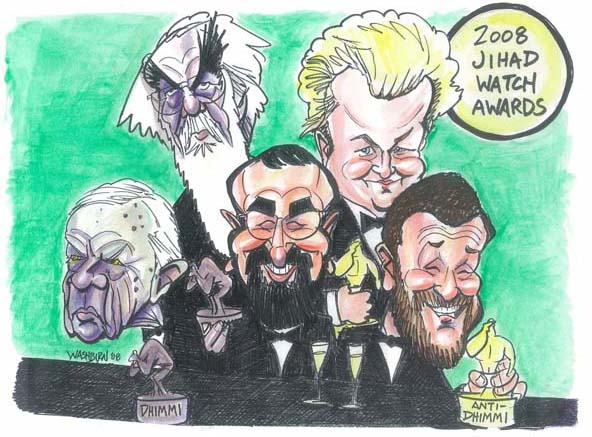 Rowan Williams is "International Dhimmi of the Year" in the 2008 Jihad Watch awards.

Rowan Williams on other topics

There is it seems no topic on which Rowan Williams will not inflict his idiotic left-wing views on us.

For 10 years he has been reading some left-wing rubbish in the Guardian, and then announcing it to the world as the position of the Church of England.

Hope at last for the Church of England: Rowan Williams steps down, 2012.

I am not a Christian, but I would love if the next Archbishop of Canterbury could be a defender of Christianity.

"whereas on politics his statements display a passionate certainty that exceeds the amount of thought invested in their construction, the opposite is true of his approach to church matters."
- The Times, leader, 9 Nov 2010, on Rowan Williams, the idiot Archbishop of Canterbury, who spends all his time attacking Western democracies on political matters with his latest half-baked opinions from The Guardian, while largely ignoring the decline of his church and the terrible persecution of Christians worldwide.

"More recently he has cultivated a special affection for one faith in particular. Unfortunately it is not his own."
- Daniel Johnson, July/Aug 2011, on the love of Rowan Williams, the Archbishop of Canterbury, for Islam.
I am not even a Christian, but I wish that Rowan Williams would defend and promote Christianity. How must actual Christians feel?