The Muslim Brotherhood, founded in Egypt in 1928, is the origin of much of modern Islamic fascism and terrorism.

It is a fascist, anti-semitic, far-right Islamist organisation. It supports sharia law and the oppression of apostates, atheists, gays and Christians. It supports the suicide bombing of Jews. It is the origin of most of the Sunni Islamist and jihadist movements terrorising the world today. It is closely linked to the terrorist group Hamas, which is the Muslim Brotherhood in Gaza. It is linked to the genocidal regime of Sudan. It was the origin of Al Qaeda. 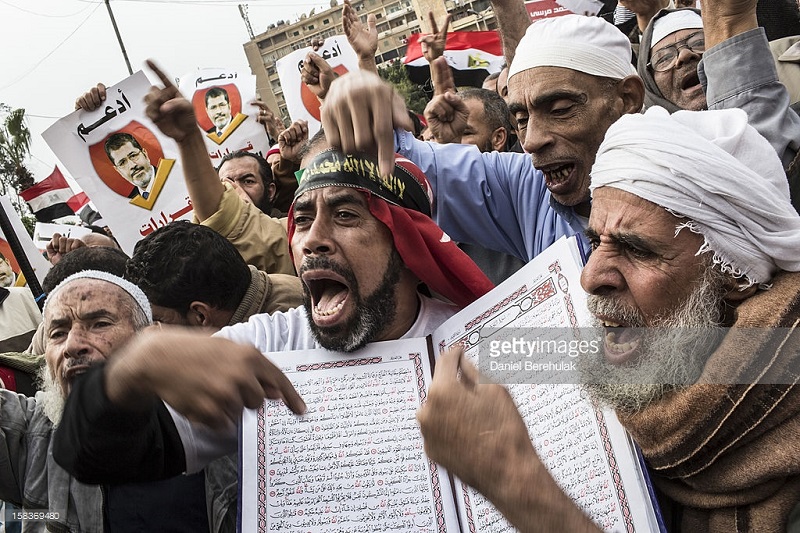 Supporters of the Muslim Brotherhood and Morsi hold up a Koran and chant slogans during a rally in Egypt in Dec 2012.
The human rights of critics of Islam, apostates, atheists, proselytisers, gays, women and Christians are clearly safe in a world run by these fellows.
From Getty Images.
This image has become a meme. See: "These people need more books" and: "See it says so right here".


The Muslim Brotherhood, the Grand Mufti of Jerusalem and Yasser Arafat. 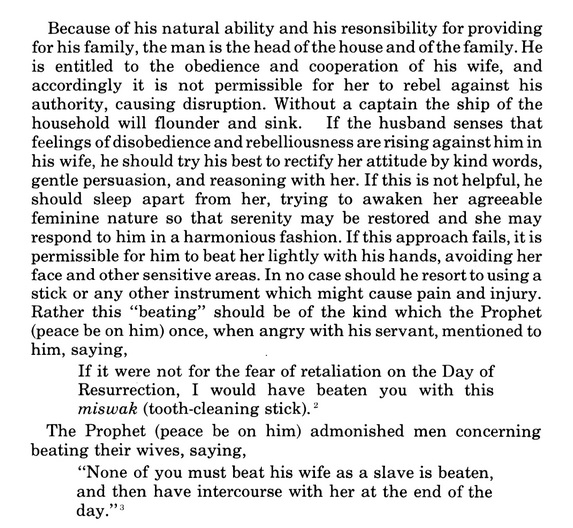 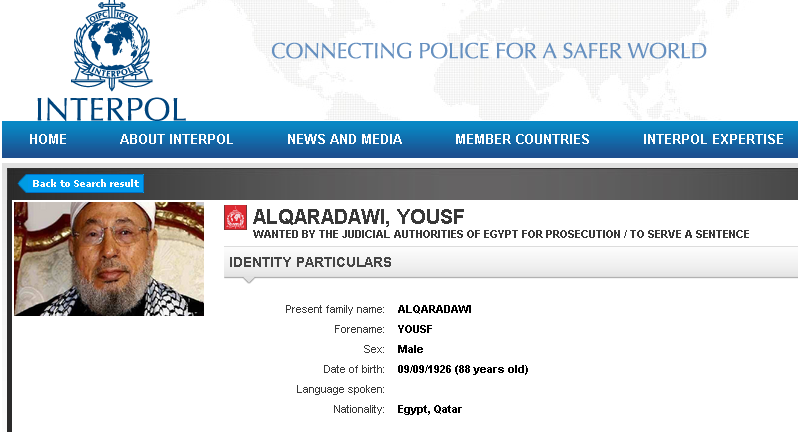 Interpol wanted notice for Yusuf al-Qaradawi, Dec 2014.
Of course, I don't actually support Interpol. I would not support any organisation that enforced Egyptian law.
But you've got to smile at seeing the vile old fascist in trouble.


Mohamed Morsi, the Muslim Brotherhood President of Egypt, on the Jews in 2010. See transcript: "These futile [Israeli-Palestinian] negotiations are a waste of time and opportunities. ... No reasonable person can expect any progress on this track. Either [you accept] the Zionists and everything they want, or else it is war. This is what these occupiers of the land of Palestine know - these blood-suckers, who attack the Palestinians, these warmongers, the descendants of apes and pigs. ... The Zionists have no right to the land of Palestine. There is no place for them on the land of Palestine."
Morsi says that children must be raised to hate the Jews.
From MEMRI. See transcript: "Dear brothers, we must not forget to nurse our children and our grandchildren on hatred towards those Zionists and Jews, and all those who support them. They must be nursed on hatred. The hatred must continue. The hatred must go on for Allah and as a form of worshiping him."

Salah Soltan promotes the blood libel against the Jews


Leading Muslim Brotherhood figure Salah Soltan (also spelt "Sultan") promotes the blood libel against the Jews.
He claims that the Jews kidnap Christians and others to slaughter them and use their blood for making bread.
See transcript. Also here. 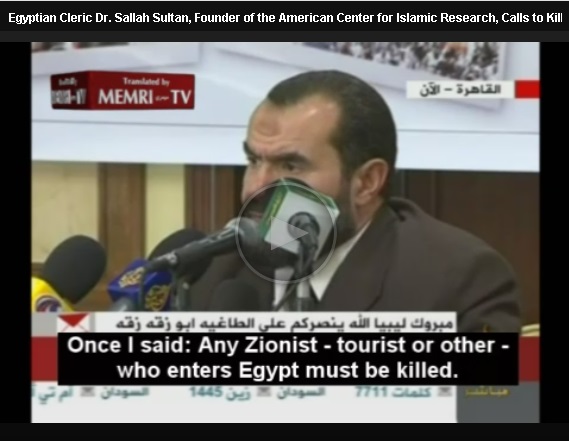 Salah Soltan, 23 Aug 2011, says that "every Zionist who enters Egypt - tourist or not - should be killed."
See transcript. And here. 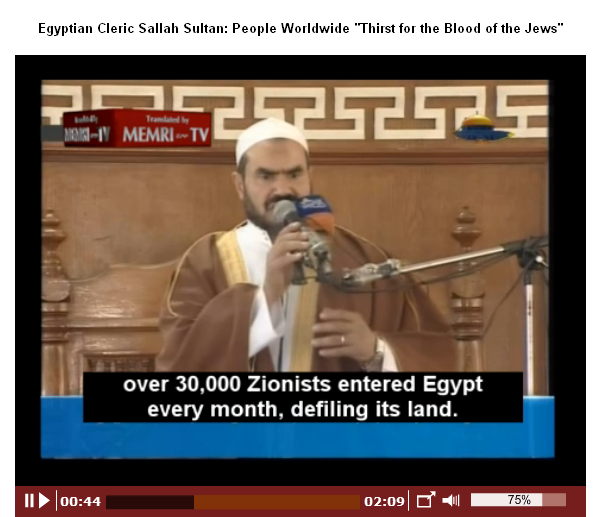 Salah Soltan, July 27 and August 3, 2012, declares that people all over the world "thirst for the blood of the Jews".

Salah Soltan is a close associate of Irish cleric Hussein Halawa of the Clonskeagh mosque in Dublin.

Soltan is a member of the European Council for Fatwa and Research based at the Clonskeagh mosque. Halawa is General Secretary.


Hussein Halawa's son Ibrahim Halawa makes a speech during the 2013 MB protests in Egypt.
Ibrahim refers to Salah Soltan as one of his leaders. See translation.

In the Facebook friends of Omaima Halawa we find Salah Soltan. 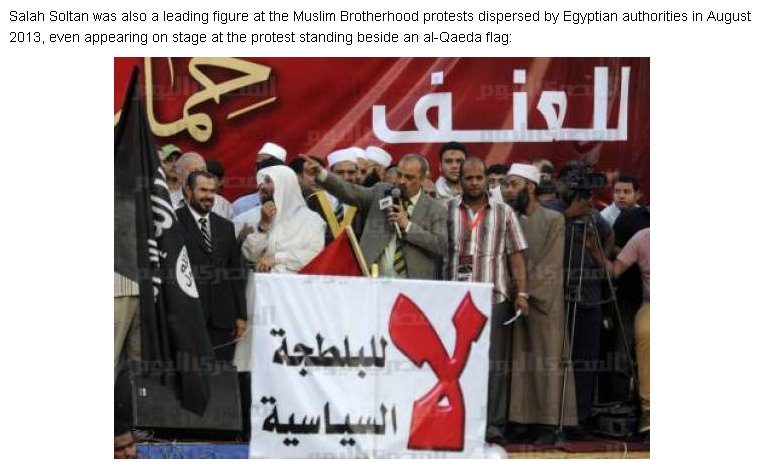 Patrick Poole finds Salah Soltan on stage at the MB protest in August 2013 with an al-Qaeda flag.
Ibrahim Halawa spoke from this stage, and cited Salah Soltan as his leader.


Yusuf Al-Qaradawi calls for the killing of apostates.

Morsi says that apostates and proselytisers must be killed.
From MEMRI. See transcript: "There is a common misconception with regard to apostates and their punishment by death. This needs to be clarified. As long as the apostate keeps it to himself, rather than proclaiming it in public ... he should not be punished in accordance with the Islamic punishment for apostasy. However, someone who proclaims his apostasy in public, and calls for others to follow suit, is a danger to society ... once his home turns into a den of iniquity, which threatens society, the law and the shari'a intervene."


The senior Muslim Brotherhood cleric Yusuf Al-Qaradawi, June 2006, explains how homosexuals should be killed: "The schools of thought disagree about the punishment. ... Some say we should throw them from a high place, like God did with the people of Sodom. Some say we should burn them, and so on. There is disagreement."
See screenshot.


Yusuf Al-Qaradawi praises Hitler and the Holocaust.
"Throughout history, Allah has imposed upon the Jews people who would punish them for their corruption. .. The last punishment was carried out by Hitler. By means of all the things he did to them - even though they exaggerated this issue - he managed to put them in their place. This was divine punishment for them. .. Allah Willing, the next time will be at the hand of the believers."
And copy.

As at Jan 2016, Hussein Halawa of the Clonskeagh mosque is friends with Irish Muslim Abdou Salam, whose profile picture openly endorses Al-Qaradawi's call for a Holocaust of the Jews.
See full size.

Yusuf Al-Qaradawi is a close associate of Irish cleric Hussein Halawa of the Clonskeagh mosque in Dublin.

Al-Qaradawi was until 2018 President of the European Council for Fatwa and Research based at the Clonskeagh mosque. Halawa was and is General Secretary. 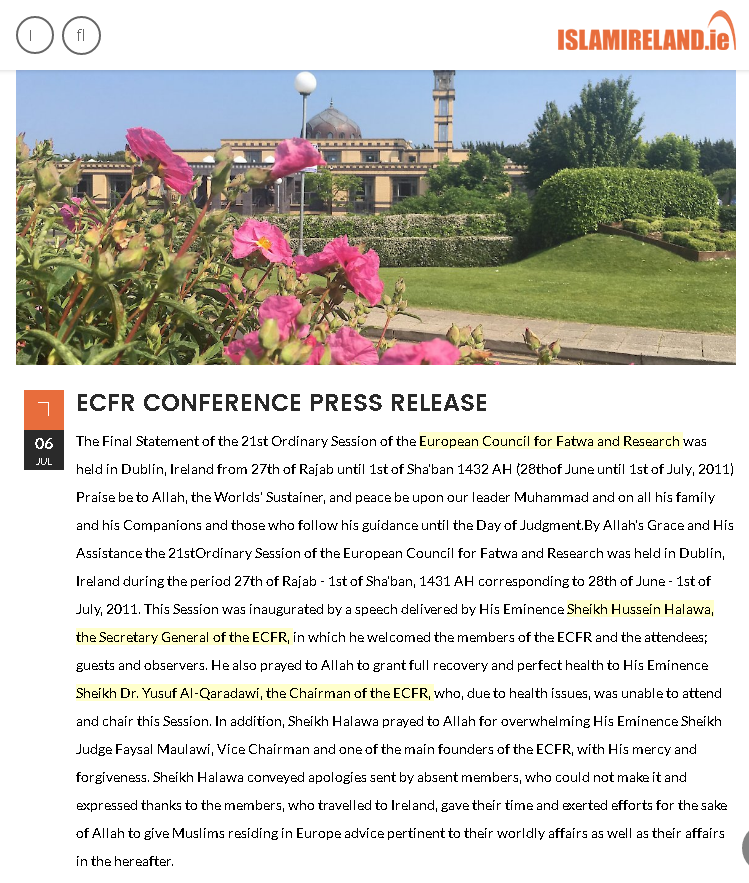 Formal links between Hussein Halawa and Clonskeagh mosque and Yusuf Al-Qaradawi:
ECFR conference at Clonskeagh mosque, 28 June to 1 July 2011.
"This Session was inaugurated by a speech delivered by His Eminence Sheikh Hussein Halawa, the Secretary General of the ECFR, in which he welcomed the members of the ECFR and the attendees; guests and observers. He also prayed to Allah to grant full recovery and perfect health to His Eminence Sheikh Dr. Yusuf Al-Qaradawi, the Chairman of the ECFR, who, due to health issues, was unable to attend and chair this Session." 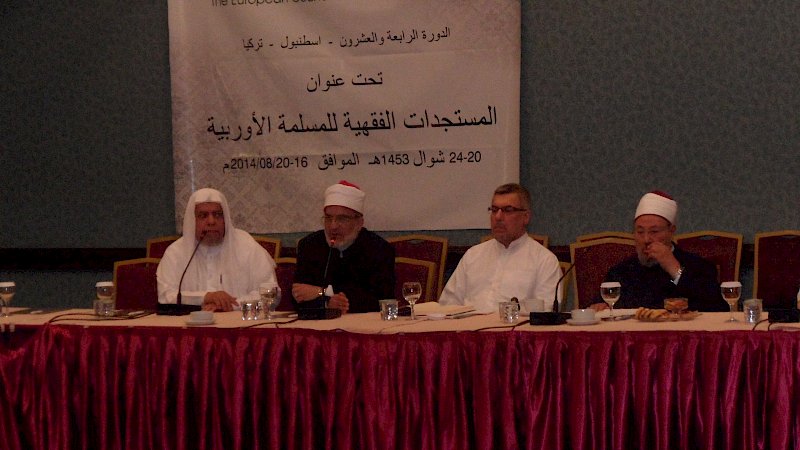 Hussein Halawa and Yusuf Al-Qaradawi at the ECFR conference in Turkey in Aug 2014.
And again in 2016. 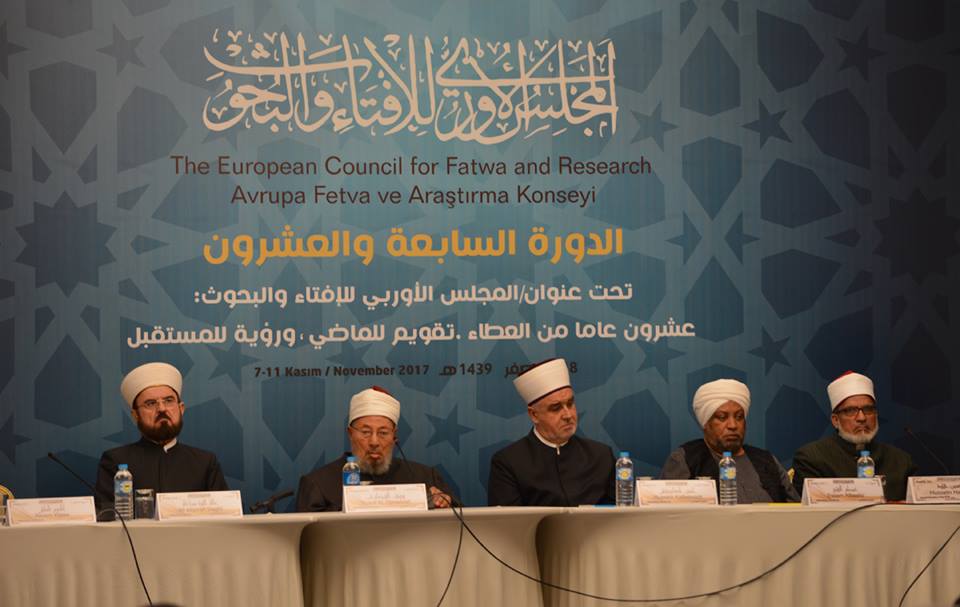 Hussein Halawa and Yusuf Al-Qaradawi at the ECFR conference in Nov 2017. 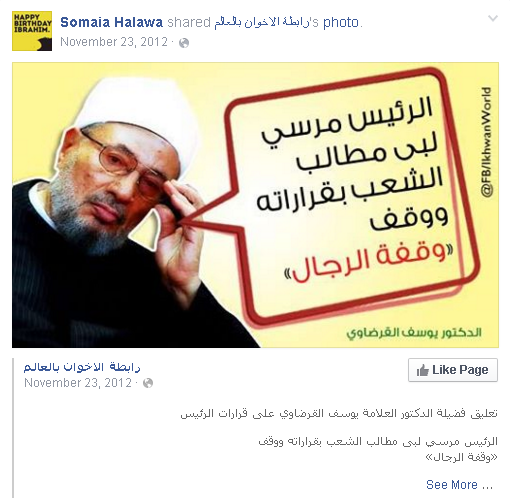 The Halawas and other Muslim Brotherhood figures 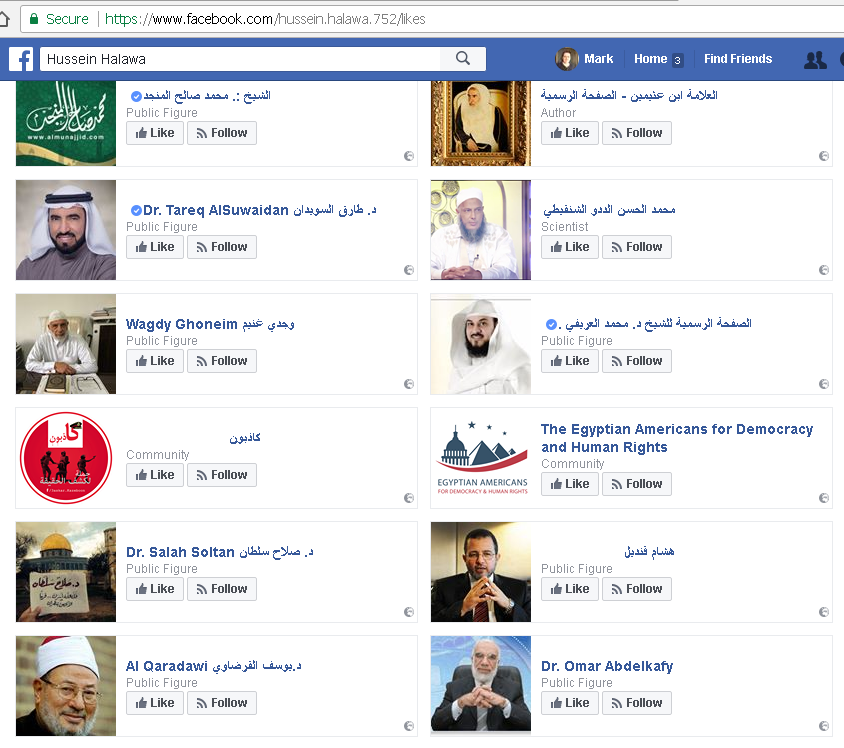 Tareq Al-Suwaidan calls for the extermination of the Jews of Israel.
See transcript: "the state of Israel is a deviant country. It is destined to be eradicated in its entirety. ... All the mothers of the Islamic nation – not only Palestinian mothers – should suckle their babies on the hatred of the sons of Zion. We hate them. They are our enemies. We should instill this in the souls of our children, until a new generation arises and wipes them off the face of the earth. ... Each and every one of us, when leaving this hall, should be contemplating a plan how to wipe out Israel." 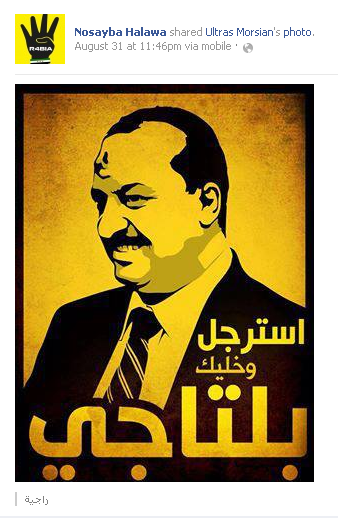 "All Arabs shall arise and annihilate the Jews! We shall fill the sea with their corpses."
- Hassan al Banna, founder of the Muslim Brotherhood, calling for a genocide of the Jews when Israel was declared a state in 1947.

"The Jews are behind materialism, animal sexuality, the destruction of the family and the dissolution of society."
– Sayyid Qutb, Muslim Brotherhood leader, "Our Battle Against The Jews", 1951.