The Irish left and Israel - NUI Galway and Israel

Galway has long been a hotbed of anti-Israel feeling in Ireland. The anti-Israel activist and Irish President Michael D. Higgins was lecturer at UCG (now NUIG) and TD for Galway West for many years.

NUIG hit the headlines in 2014 when its students voted to boycott Israel.

The students of NUI Galway disgracefully voted on 6 March 2014 for their students union to support the boycott of Israel. Shame on them.

The vote has little or no practical meaning. It merely has symbolic meaning. It is a declaration by foolish western dhimmis that they despise the front-line western states and offer solidarity to the ruthless enemies of the west. 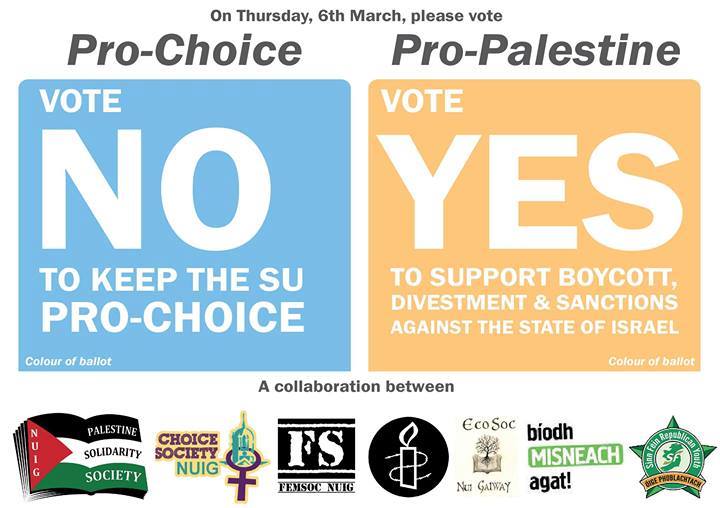 Irish "feminists" support Islam and sharia against western liberal values.
Feminist Society NUIG and Choice Society NUIG support the boycott of Israel, Mar 2014.
Some "feminists" they are!
From here.


 
The state TV of the terrorist state of Iran is delighted with the Irish students.
If the Iranian regime likes what you do, you should take a long hard look at yourself.

An incredible video went viral in March 2014 showing a screaming anti-Israel mob at NUIG disrupting a peaceful pro-Israel meeting before the boycott vote. Here it is:

"Get the fuck off our campus!"
Anti-Israel extremist Joseph Loughnane and other thugs disrupt a pro-Israel meeting before the NUIG vote, March 2014.
Shocking hatred of Israel from European totalitarians.
Contempt for free speech. Contempt for debate. Contempt for the idea of a university.

Embed the video on your site using this code:

Put it on other video hosting sites. Spread it far and wide.

The original copy of the video got over 40,000 views in 1 week before the left-wing/Islamist censors managed to take it down.
Please copy it and spread it far and wide.

The star of the viral video is left-wing extremist Joseph Loughnane. 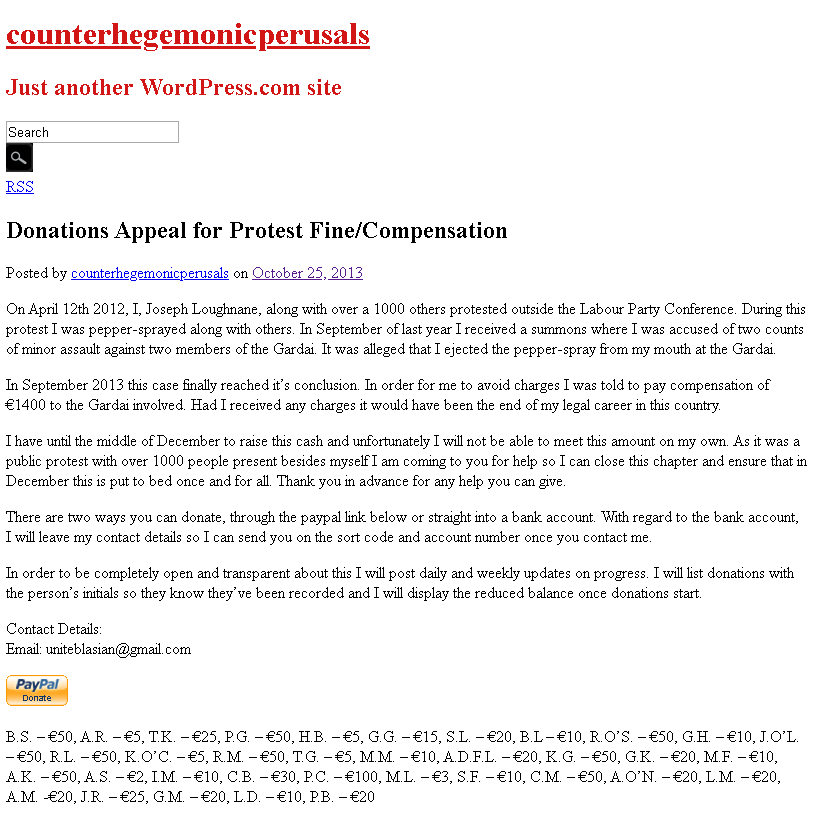 Loughnane was fined for assault against the Gardai at a protest in Apr 2012.

Joseph Loughnane says he is "half-Pakistani, half-Irish" and "a born Muslim".
He describes himself on Twitter now as a "Gramscian Socialist".
He supports right-wing Islamic groups (see below). 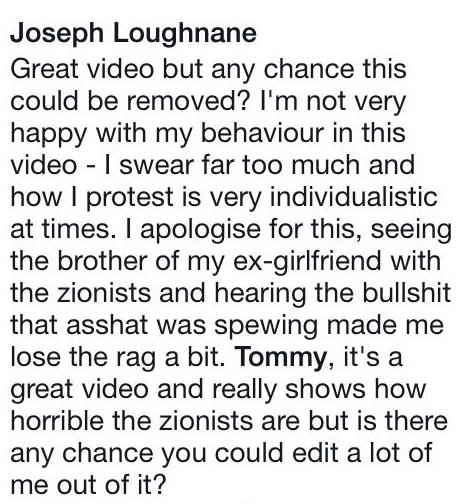 Joseph Loughnane admits it is him in the video and wants it taken down.
From here.

The long-time anti-Israel activist Tommy Donnellan posted a video of the event to facebook.
Joseph Loughnane in the message above is actually asking Tommy Donnellan to remove the clip of him.
Donnellan helped out by removing the video, but another clip existed and went viral. 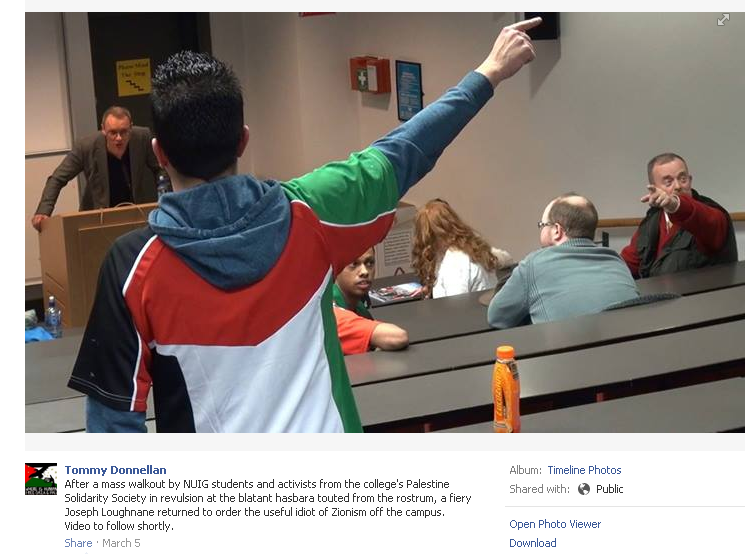 Tommy Donnellan identifies the person in the video as "a fiery Joseph Loughnane". 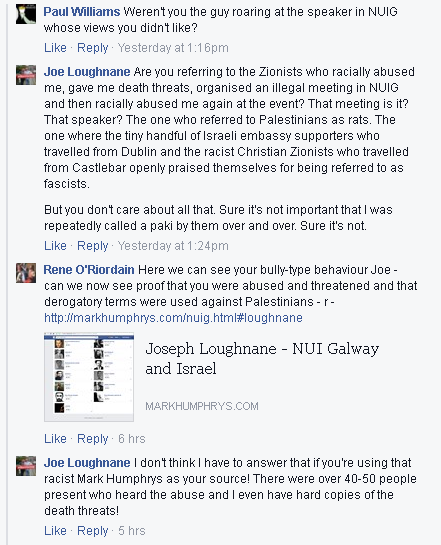 Loughnane, April 2016, libels the speaker Alan Johnson and says he "referred to Palestinians as rats".
He libels me as a "racist".
He claims he was threatened and "racially abused" at the meeting and called a "paki".
It's two years later and he has never presented any evidence of these extraordinary claims. 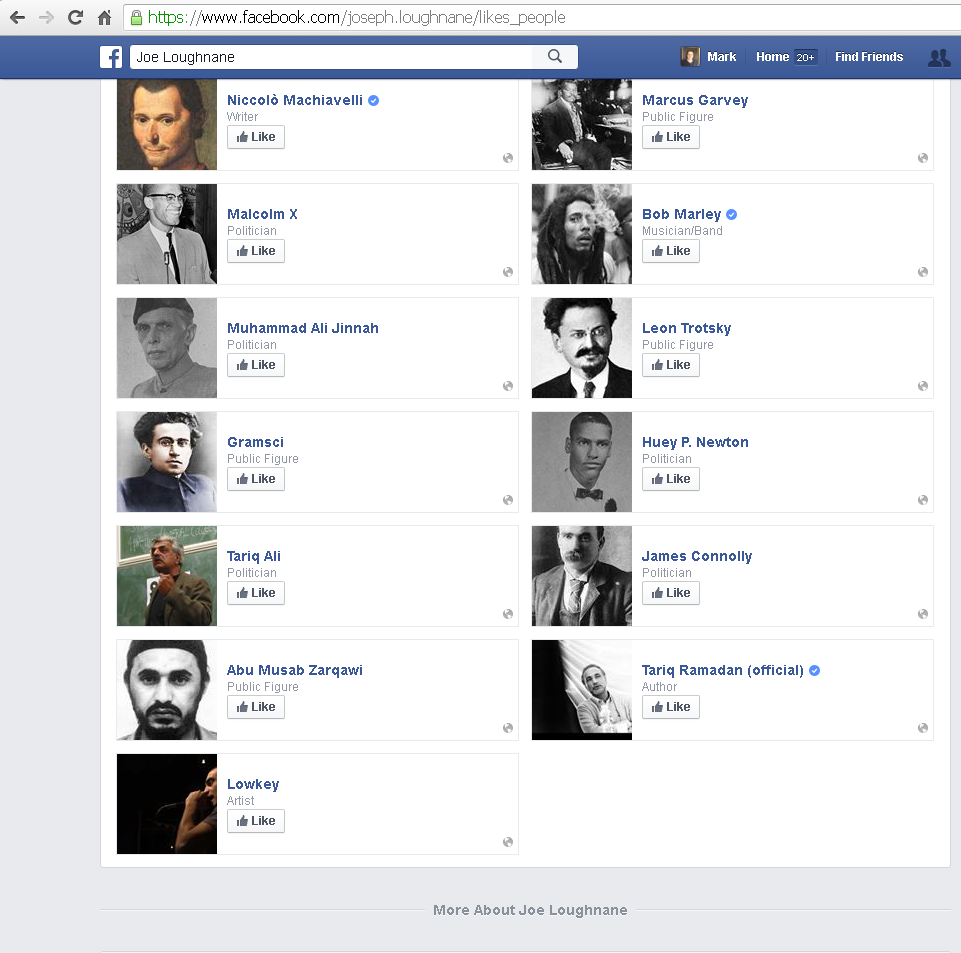 On Facebook, Joseph Loughnane shows us the People he likes.
These include the communist butcher Leon Trotsky and the jihadi butcher of Shia Muslims, Abu Musab al-Zarqawi.
Screenshot of April 2016. 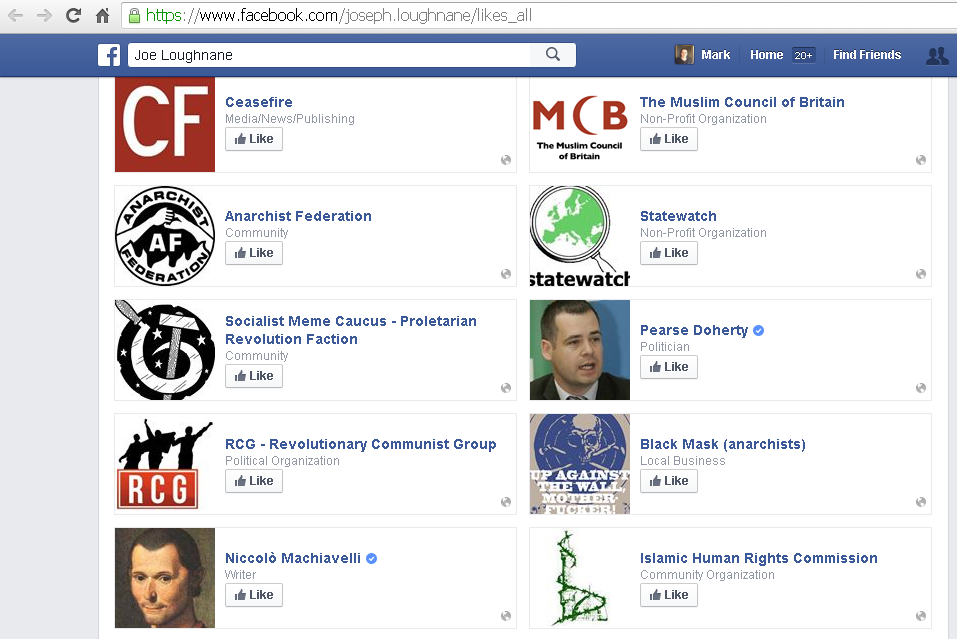 His list of All likes includes (among many other appalling people) right-wing Islamists like the Islamic Research Foundation and the Islamic Human Rights Commission and the Muslim Centre of Ireland and the Cork Dawah Centre and Yusuf Chambers and Shaker Aamer.
Screenshot of April 2016.

He likes jihadi butcher Abu Musab al-Zarqawi but he doesn't like Israeli democrats.
Loughnane on the death of the former Prime Minister of Israel, Ariel Sharon, in Jan 2014.
"Rot in hell Mr Sharon. ... How can even one person mourn this vile pig's passing?" 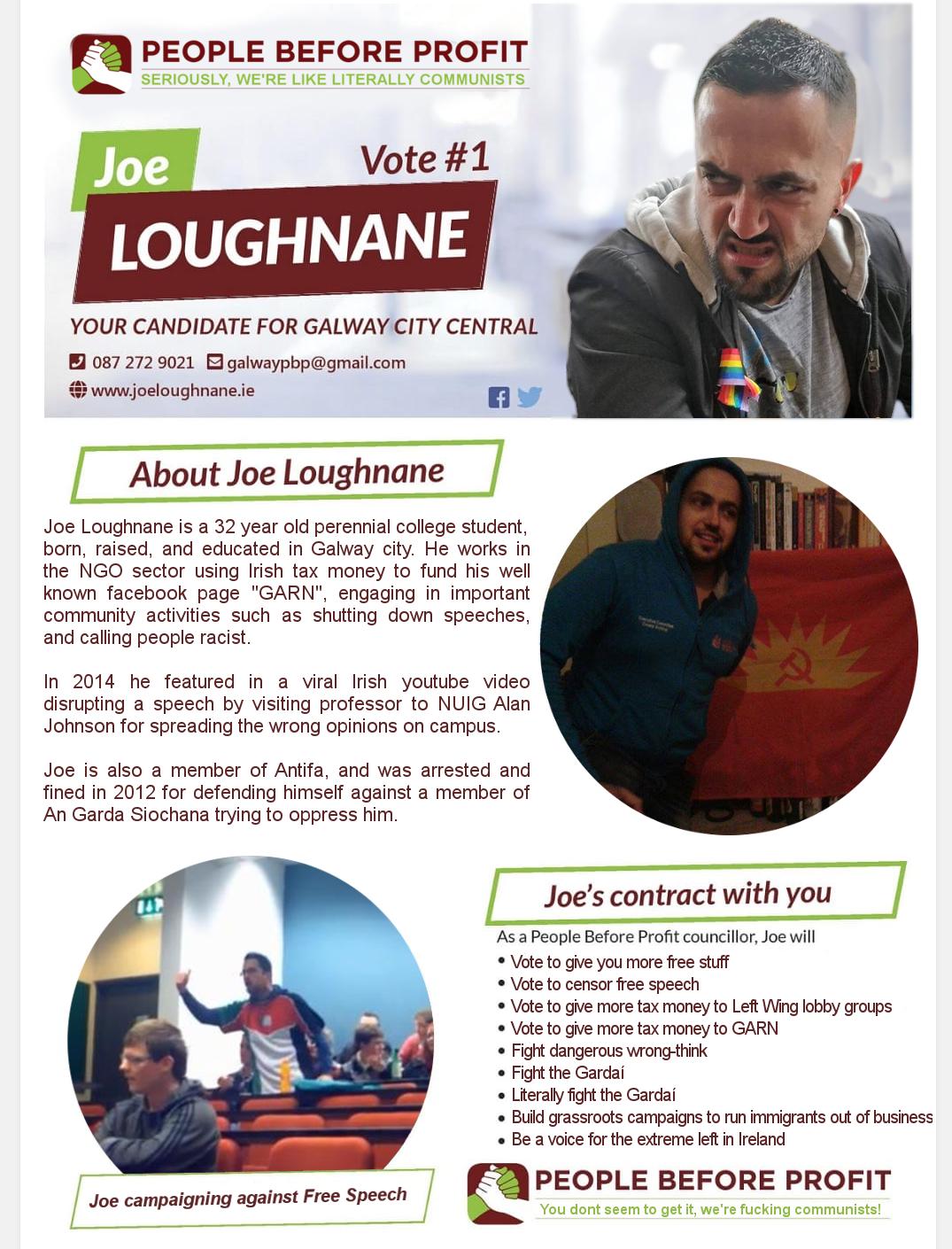