People Before Profit (PBP) and the linked groups the Irish "Anti-War" Movement (IAWM) and the Socialist Workers Party (SWP) are probably the main supporters of the global jihad in Ireland, more than any Islamic group.

Like many Marxists, they think jihadists are part of the "resistance" to the Western order, and so jihad will somehow help "liberate" the world.


Richard Boyd Barrett (PBP) and an anti-Israel mob chant outside the Israeli Embassy, Dublin, 8 June 2010.
How pathetic to support totalitarians against a democracy. 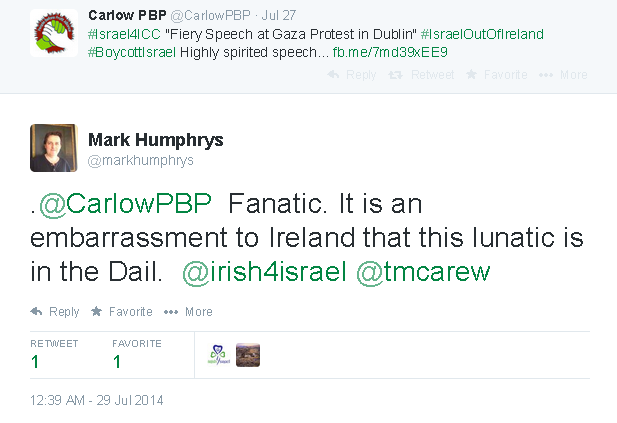 Myself and Carlow "People Before Profit" exchange, ahem, different views about the merits of Richard Boyd Barrett.

Richard Boyd Barrett (PBP) reads out Iranian fake quote in the Dail, 9 June 2015.
Boyd Barrett says: "This is the Defence Minister, Moshe Ya'alon, talking just a couple of weeks ago: "Israel is going to hurt Lebanese civilians to include kids of the family. We went through a very long discussion. We did it then. We did it in the Gaza Strip. We are going to do it in any round of hostilities in the future.""
In reality, this is an Iranian fake quote.

Support for jihad against Israel:
Gino Kenny, People Before Profit TD, says in May 2021: "Palestinians have every right to resist the occupation. This is nothing new. ... Palestinian resistance is very legitimate."

Councillor John Lyons of PBP is an appalling extremist.
He praises the democidal Soviet Union. And he claims the democracy of Israel is a "genocidal state". 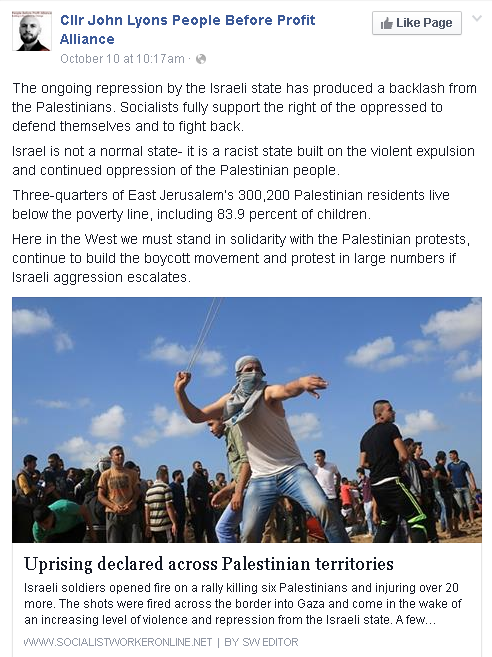 John Lyons, 10 Oct 2015, openly supports Palestinian terror attacks against Israel: "Socialists fully support the right of the oppressed to defend themselves and to fight back."

John Lyons claims that Israel is a "genocidal state". 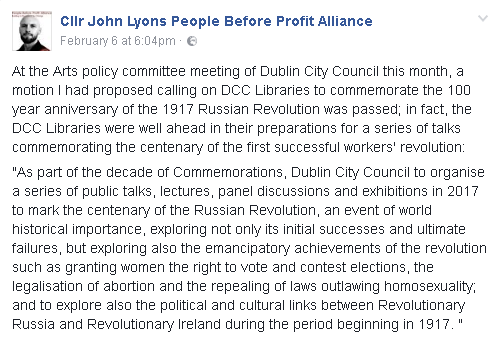 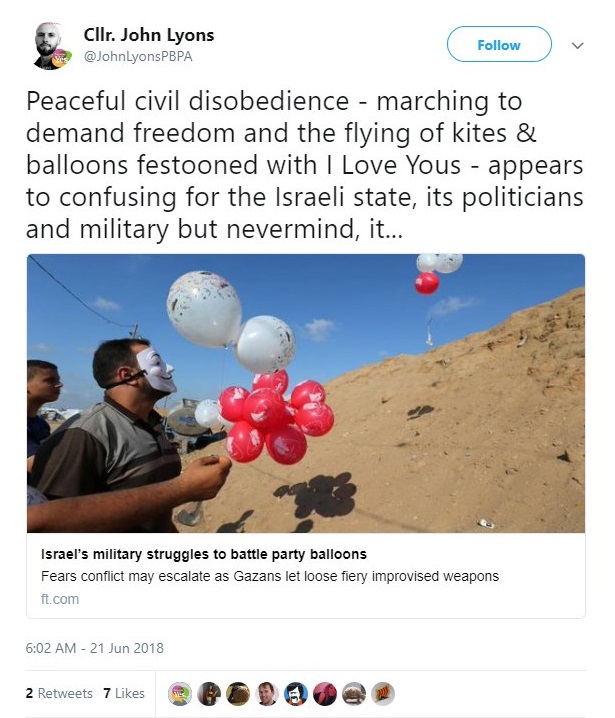 A comical tweet by John Lyons, 21 June 2018.
In the Gaza border riots, jihadis are sending bombs by balloon into Israel. They have messages like "I love you" to appeal to children, in the hope that children pick them up and get killed. And this idiot thinks they are really messages of love!
He was so embarrassed by the feedback that he deleted the tweet. But he will carry on attacking Israel from his position of ignorance.
See full size. Captured here. 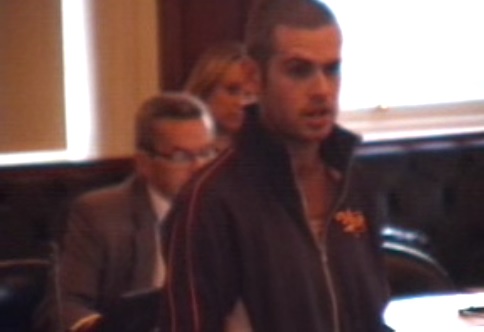 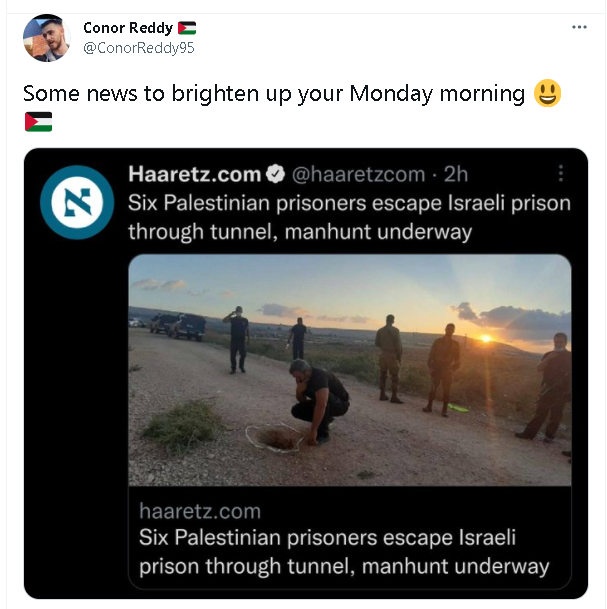 Conor Reddy of PBP promoting jihad terrorism, Sept 2021.
He posted this celebration after 6 Palestinian prisoners escaped from an Israeli jail.
5 of the 6 are Palestinian Islamic Jihad.
The other is an Al-Aqsa Martyrs' Brigades leader responsible for suicide bombings of Jews.
This is what PBP stands for.
Conor Reddy blocked me as soon as I posted this.

Conor Reddy is open about his support for jihad terrorism.
With reference to actual jihad terrorists, he says: "Those who resist are right to, more power to them."
This is a follow-on to the above post. He is actually talking about Palestinian Islamic Jihad and Al-Aqsa Martyrs' Brigades.

Sami El-Sayed is a young PBP activist.
He says he is "an atheist of a Muslim background".
He has found a home in PBP, the most pro-Islamist and pro-jihadist group in Ireland.
Can you explain how that works? I cannot. 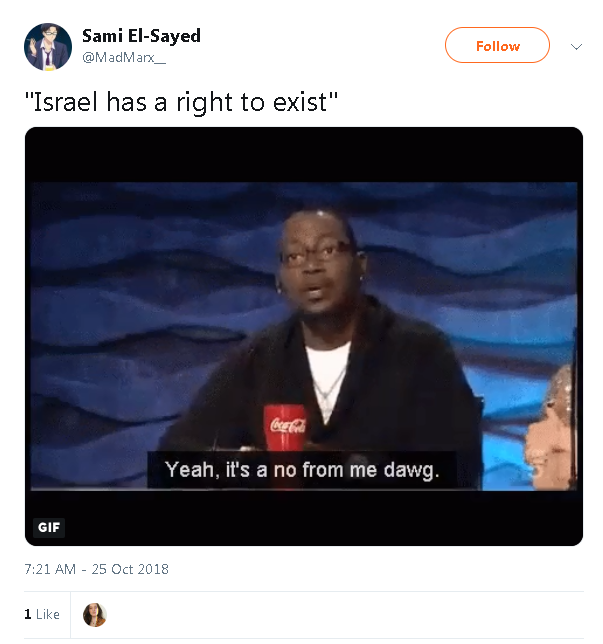 Sami El-Sayed says Israel has no right to exist, Oct 2018.
From here. 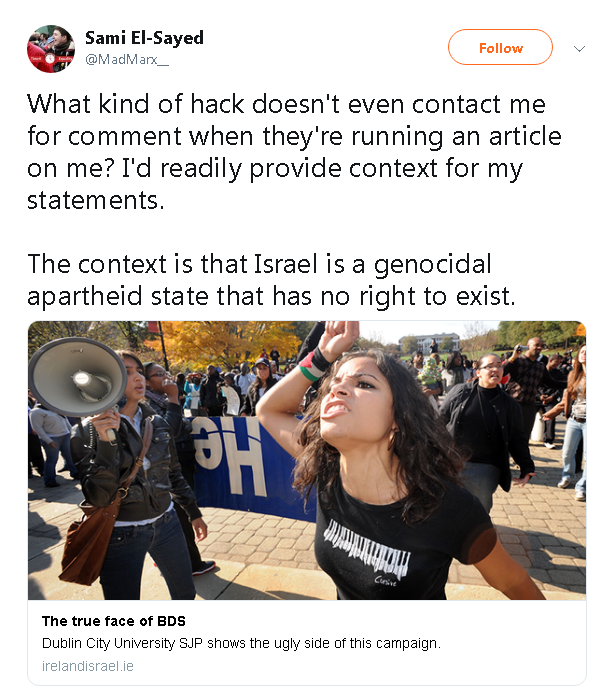 His hatred of Israel was noticed in this article.
He responds, Feb 2019, and says yes, he thinks Israel has no right to exist. 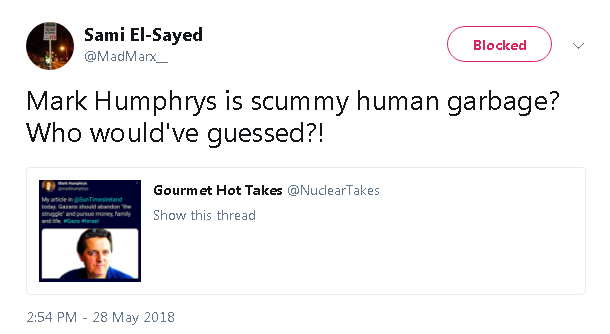 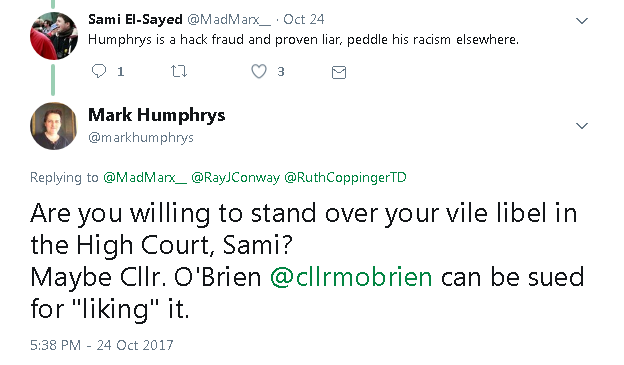 Sami El-Sayed calls me a "proven liar", Oct 2017.
"Proven" inside his addled Marxist brain.
I blocked him because of this kind of behaviour.
"cllrmobrien" is now former Councillor Michael O'Brien. 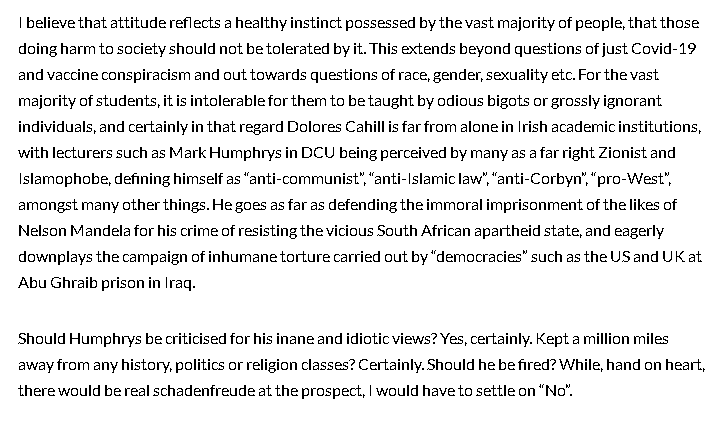 Sami El-Sayed with some bizarre distortions of my views in an article in the UCD student paper, 22 Oct 2021.