Northern Ireland was a deeply flawed majoritarian state that needed radical reform to make Catholics equal citizens. But as every year goes by, it becomes clearer that it was not worth the loss of a single human life.

Violence should be reserved for situations where there is simply no hope of progress through voting, argument and democratic means. This was simply not the case in Northern Ireland. The oppression was modest, and the violence, as every year goes by, looks more and more like the real oppression.

The Peace Process and power sharing did basically end the war. And NI is such a better place now than during the Troubles.

But SF-IRA has carried on with a drip feed of community violence and organised crime. After they killed Paul Quinn in 2007, SF-IRA did not kill anyone for years. But then they killed Kevin McGuigan in 2015. Will they ever stop killing?

SF-IRA, to me, as a voter of the Republic of Ireland, stand for the past. They stand for a (Gaelic, Celtic, socialist) Catholic tribal state. They do not understand the South if they think this is appealing. We had a Catholic tribal state, and it took a long fight to get rid of it and establish the current diverse, secular state. We're not going back.


The Troubles.
Was the real but modest oppression suffered by NI Catholics worth the loss of a single human life?
I think obviously no.

I have no problem in theory with an armed campaign against a regime recognised by the UN.

Many of the world's regimes have no right to exist, and armed conflict against, say, the 20 or 30 worst human-rights abusing regimes in the world seems justifiable, depending on the nature of the conflict.

Northern Ireland was a flawed state, a majoritarian democracy which needed to be reformed into a liberal democracy. But it does not seem to me that it was ever flawed enough to justify an armed campaign against it.

In the end in 1998, the state was reformed and is now based on liberal democratic principles.

I don't know. But even if the violence did bring this reform about, it still wasn't justified. The war inflicted immense suffering (on all sides) way out of proportion to the (many) flaws of the Northern Ireland state.

It is not illogical to believe that an armed campaign is unjustified and at the same time the fundamental issue is the reform of the state. There is a lesson from Northern Ireland for other internal conflicts - that we need to distinguish between these cases:

In Northern Ireland's case, the state did need reform, and that is what solved the conflict.

For years, the policy on Northern Ireland was to treat it as a security problem only. Total isolation of the IRA and their apologists. Refusing to negotiate with terrorists. Banning them from speaking on radio or TV. Treating them as insane, as criminals with no political motive. There was a moral high ground to it, but pragmatically it did not serve the purpose of shortening the war. The policy of trying to establish a liberal democracy was never tried.


The IRA collaborated with Nazi Germany in WW2.
The British Army fought against and defeated Nazi Germany.
The IRA bombed a memorial service for the WW2 allies in Enniskillen in 1987.

I link to republican sites on this website, and I believe they should be allowed to exist. In Ireland, Section 31 of the 1960 Broadcasting Act prohibited the broadcasting of any material seen as promoting or inciting crime. This was used to ban Sinn Fein and other violent groups from the airwaves from 1972 to 1994. Oddly, their literature was never banned. 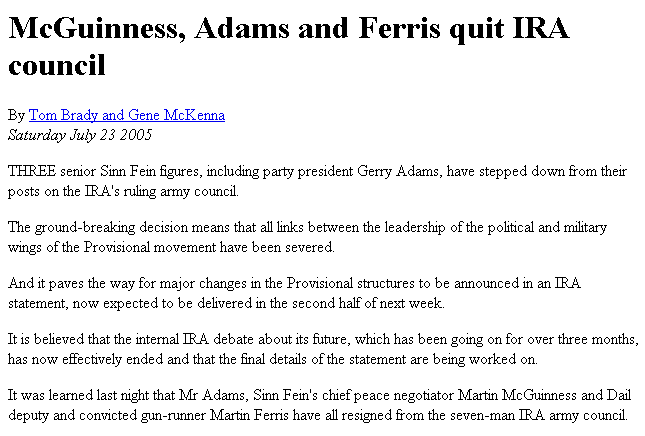 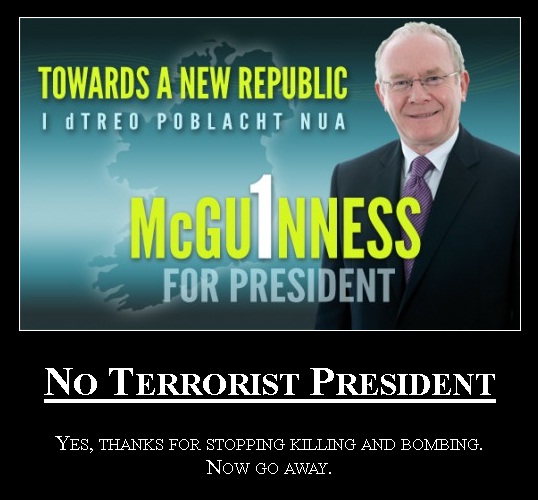 At least Martin McGuinness did not win the Irish presidential election, 2011.
In fact, he barely increased SF-IRA's vote (243,000) at all on the 2011 general election (221,000).
Only people who were already Shinners voted for him.
But it was cold comfort since Michael D. Higgins became President instead. 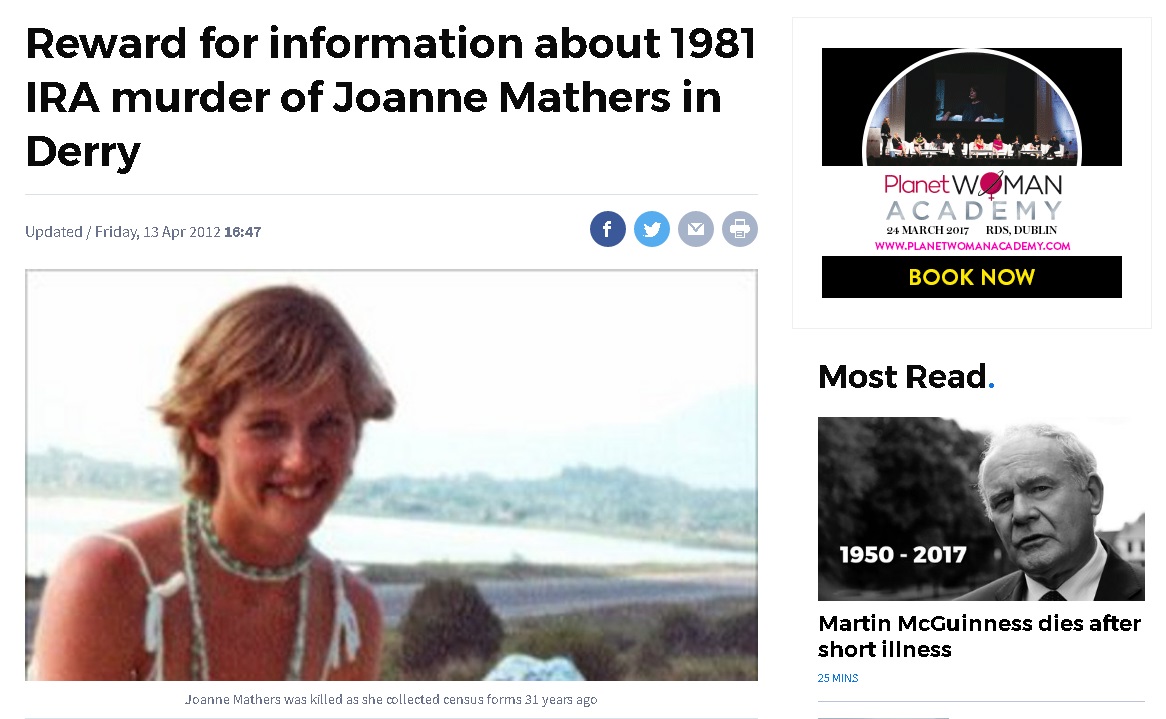 The problem with setting up a Truth and Reconciliation Commission is that the violence is not over. Sinn Fein / IRA is still killing people, and does not want us to know who did it. And Sinn Fein / IRA wants to reserve the right to kill more people in the future.

Like all street protesters, "direct action" vandals, rioters, looters and terrorists, SF-IRA use protest and violence because they are unable to win using logic and reason.

The majority of voters reject their arguments, and have demonstrated this rejection again and again in elections. Instead of accepting their election loss, though, SF-IRA want to override it. As Amir Taheri says: "Those who can never win elections, always take to the streets."

Sectarian Republican thugs riot in Dublin in 2006.
This, to me, is what Martin McGuinness and SF-IRA stand for.
See more videos.

If we exclude Omagh, SF-IRA has killed more people since the ceasefire than the Republican dissidents.

The Omagh bombing.
This is all that the dissidents will be remembered for.

Dramatisation of the Omagh bombing.
Clip of Omagh (2004).

If nationalists are going to compromise, and stay in the UK for the forseeable future, then the UK must welcome them as first-class citizens (as it should have welcomed all the Irish in the past, but never did). These trivial, symbolic changes would be so easy to make, and only good could flow out of them:

The real discrimination and modest oppression ended years ago. For many years now, the only "oppression" has been symbolic. And fighting that is not worth the loss of a single human life. 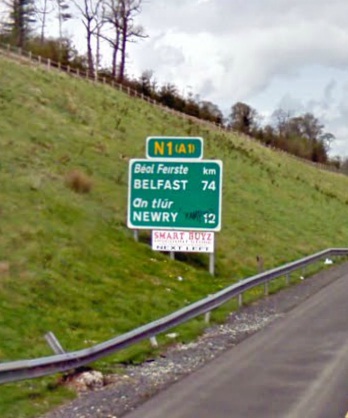 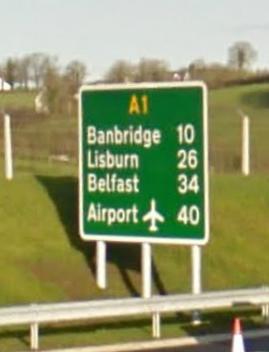 Symbolism:
Ireland, north and south, is full of placenames that have been anglicised from the old Irish name. (For example, Dublin.) Roadsigns in the south include the old Irish name, which is rather poetic. Roadsigns in the north do not.
(Left) Road sign in the south to Belfast and Newry shows the old Irish names. From Google Street View.
(Right) When you go north of the border, however, the Irish vanishes. From Google Street View.
The Irish language now has some official status in NI. Including the old Irish name in road signs would be a nice, poetic, symbolic change.
And the symbolism is not that the north is going Irish. The symbolism is that northern nationalists are staying in the UK.