I'm against the gangsters of Sinn Fein-IRA, but that doesn't mean I have much time for their unionist opponents. As a southern Irishman, I have more in common with England than with Northern Ireland. England and the Republic of Ireland are both relaxed, liberal, secular states where nobody cares what religion you are. Northern Ireland is not like that, so it is more alien to me than England is.

If unionists could only embark on a secular, liberal project to make Northern Ireland more like England, I would support them all the way. But 17th century religious triumphalism is utterly alienating.

Unionists must abandon any taint of ethnic or religious supremacy, and become secular and universal - like the English. Certainly a secular, liberal case can be made for the union. 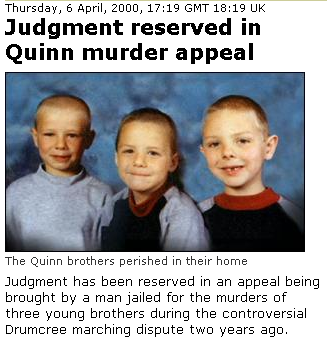 The killing of the three Quinn children in 1998.
Carried out by the UVF to help the Christians of the Church of Ireland march down the Garvaghy Road.
From BBC.

Drumcree parish church website today.
Em, shouldn't there be a memorial to the Quinn children on the front page?
There is in fact no mention of them on the site.

"Antichrist! I renounce you and all your cults and creeds!"
- Ian Paisley yelling at the Pope when he visited the European Parliament in 1988.

The definition of a country

Irish nationalists often assume that the island of Ireland is a natural political entity, and should be a country, and it is "artificial" to partition it. Let us look at how one can define the borders of any of the countries on earth in the first place.

Consider this thought experiment (Not my idea - I heard this somewhere): If there was a land bridge between Ireland and Scotland (as there was in the past), we would have to draw the border somewhere on the land. It would probably be drawn not far from where it is, and it would be accepted. People - especially in the South - would be far more relaxed about it. It is the fact that Ireland is an island that makes one think the border should be at the sea. But this is not really logical.

What I am making are the following points: 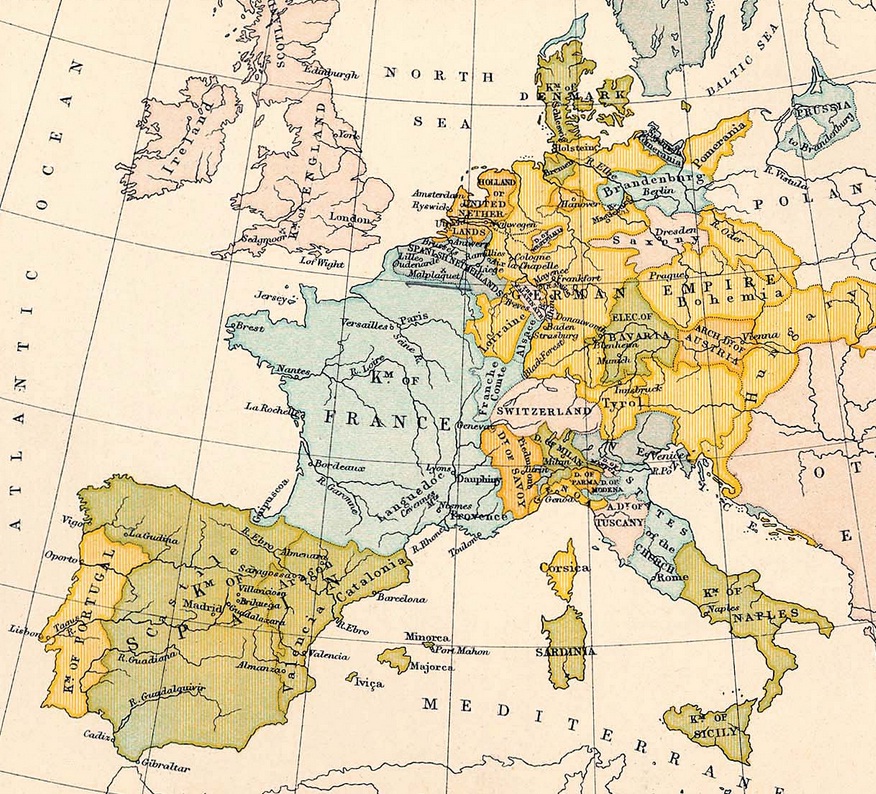 Map of Europe in 1700.
Please define what the borders in central Europe should be.
The fact is, there is no set of formal principles whereby one can define the borders of the countries of the earth.
From here.


The Dublin and Monaghan bombings, 1974.

Sir Patrick Mayhew's memorable reaction to the Loughinisland massacre, 1994, nicely illustrates why no one in England supports loyalism.

The loyalist paramilitaries did not serve the role of the IRA's enemy in war. The British security forces filled that role, and fought according to the rules of war.

The loyalists did not fight according to the rules of war. They killed almost exclusively innocent civilians, and not by accident either. These were not errors. These were not "collateral damage" - they were the actual targets.

The loyalist paramilitaries were Protestant religious death squads - killing and torturing innocent, uninvolved civilians for religion. We were supposed to believe that both sides were doing this of course, but in retrospect that was unthinking politically-correct humbug, one of many such devices over the last 30 years to avoid thinking about the conflict. Anti-Catholicism has been just as real in Britain's history as anti-semitism has been in Europe's, and it could so easily have ended in the horrors of the camps (as have in fact been proposed by a number of loyalist thinkers).

The similarities of the loyalists and the Palestinians: Loyalists have killed and tortured almost exclusively random Catholic civilians. This is because they are motivated by a fundamental racism that their opponents do not feel. Any objective historian will be struck by the fact that, like in the Israeli-Palestinian conflict, the republicans generally tried to hit military targets, while the loyalist supporters would cheer the killing of any random civilian. To observe this does not mean one supports either the republicans or the Israelis. It is to observe that fundamental beliefs come out in the way one wages war.


I don't happen to think that Christianity (whether Protestant, Catholic, whatever) is remotely true, or has got any kind of real understanding of the nature of our universe, but is it perhaps good for society anyway? It has inspired many good things and many good people, to be sure, but it has a lot to make up for since it has also inspired great evils such as medieval witch-killing and modern day loyalism. In general, its moral superiority over the paganism it replaced or over modern day atheism must remain unproven. Northern Ireland is a place that has far, far too much Christianity. 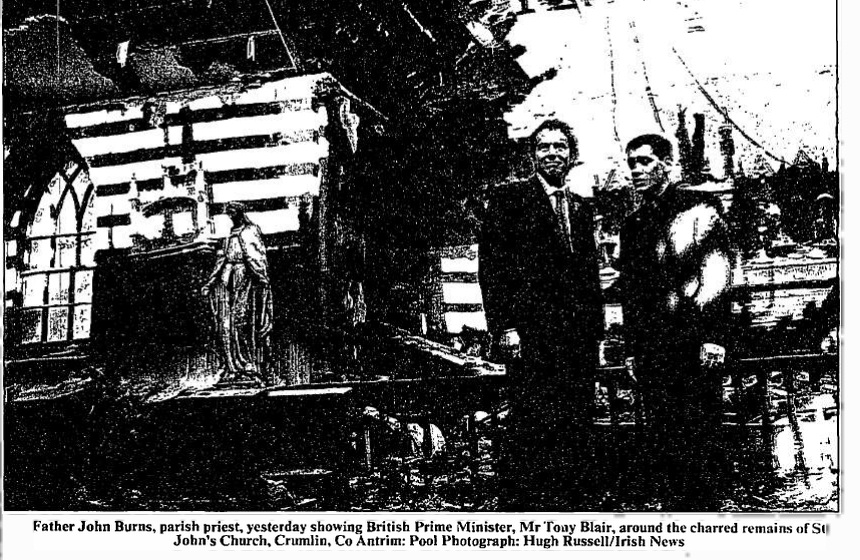 Arson attack on Catholic church in NI in 1998.
From Irish Times, July 3, 1998.
A leaflet distributed at Drumcree approved of the church burning.
The leaflet quoted from Deuteronomy 7, which, they are correct in claiming, fully supports such activities: "This is what you are to do to them: Break down their altars, smash their sacred stones, cut down their Asherah poles and burn their idols in the fire."
Politics      Religion      Politics feeds      Religion feeds      Maps      Since 1995.