It may be wrong to give such attention to the incoherent political opinions of an uneducated entertainer.

But naive young people listen to and follow him. And hey, he makes as much sense as Noam Chomsky. 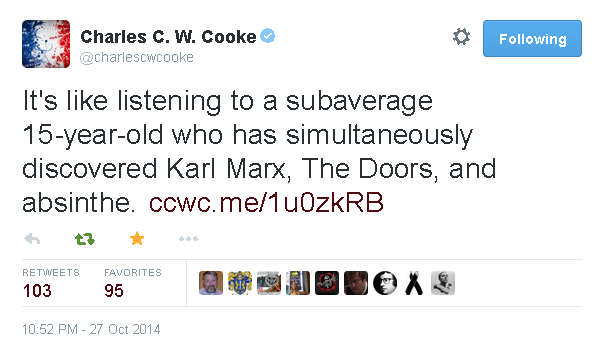 The parody "We've Got To Do Something"

Back in 2008, I seriously thought this song was a parody. I did not realise these are Russell Brand's actual opinions.
Russell Brand's hilarious song "We've Got To Do Something" by "Aldous Snow" (2008) parodies (*) the world of the left.
The song takes the piss out of (*) many modern young people's hopeless attempts to make sense of the world.
The ideas of many naive left-wing charities and left-wing political parties are really not that far from this.
See lyrics.

Oh dear. I thought Russell Brand's song was a brilliant parody of left-wing idiots. I didn't realise he meant it seriously.

It turns out that Russell Brand's own politics are like Aldous Snow's.

In Oct 2013, millionaire Russell Brand (net worth $15 m) made an embarrassing call for "revolution". 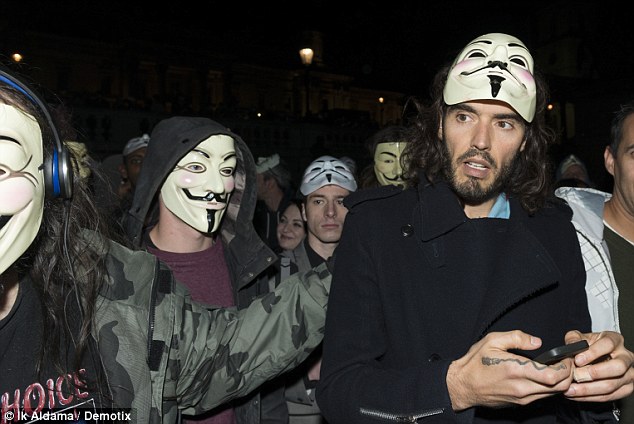 Russell Brand leads a mob rioting against government budget cuts, London, Nov 2013.
Centuries of democratic tradition say these are the kind of things that should be debated calmly and voted on. But Russell Brand knows better. Violence is how to decide these questions! He leads an unelected, undemocratic, mob of rioters who think their views, not the views of voters, should prevail. They don't have the guts to stand for election. Instead this mob of democracy-haters throws fireworks and bottles and assaults the police. 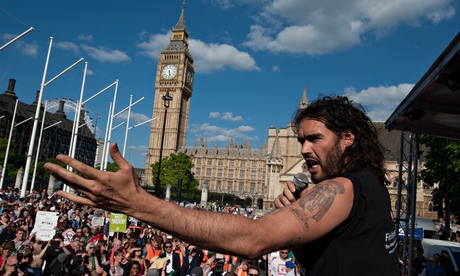 Russell Brand addresses another mob, London, June 2014.
This mob calls itself "The People's Assembly".
Of course, elections are the people's assembly. All other "people's assemblies" are self-appointed elites.
Democracy-hater Brand declared that members of the House of Commons "generally do not represent us", despite the fact they were elected and he was not. Who voted for him? He never even had the guts to run. 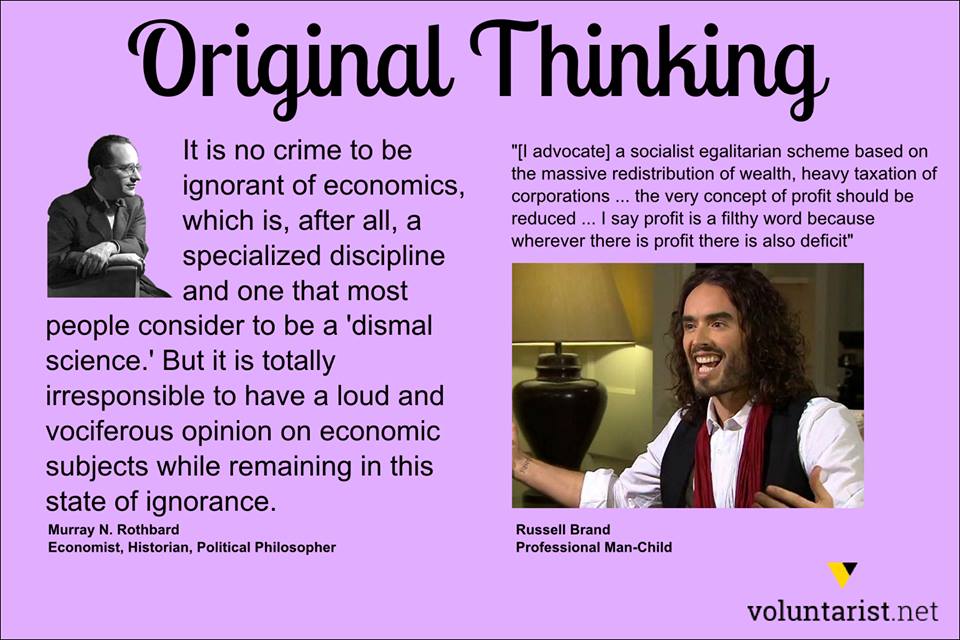 Of course, like every uneducated dumbass, Russell Brand is anti-Israel.
Uneducated man bangs on about Israel, July 2014, a topic he knows nothing about.
Israellycool, 20 July 2014, gives the highlights, if you can't stand listening to incoherent ramble.
One sample of his ignorance: "Palestinian sovereignty was agreed and their borders have been continually impeached upon since the establishment of Israel."
What's the bets this guy has never even heard of the Ottoman Empire?

Russell Brand reminds me of the people Derek Hopper talks about.

The Middle East in 1914.
Israel is just a region in the Ottoman Empire.
There is no country called "Palestine".
Syria, Jordan and Lebanon do not exist either. All of these are recent inventions.
From here.


In 2012, Russell Brand had counterjihadist Pamela Geller on his show "Brand X", and he revealed himself to be an idiot.
I don't agree with all of Geller's stuff, but Brand was completely incapable of addressing the issues.
Episode filmed 26 Oct 2012, edited version broadcast 1 Nov 2012.
Search for clips. The above is not the full thing. 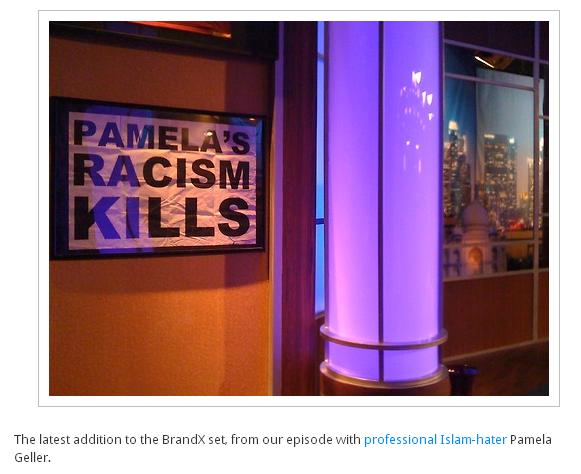 The show now proudly displays the sign on its wall. 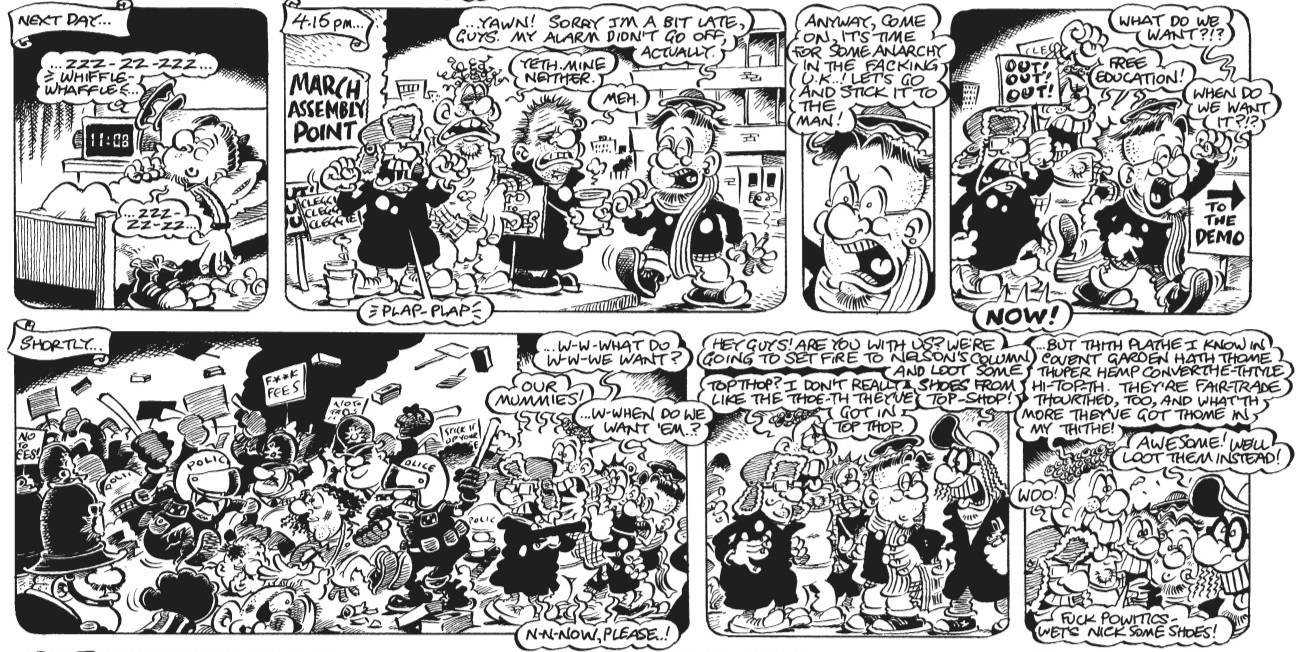 Russell Brand's followers stage a protest.
This is Student Grant. From Viz.

"liberal democracy, for all its discontents and frustrations, is still better than any of the plausible or previously established alternatives. It is certainly superior to what one imagines Russell Brand's utopia would look like." - Alex Massie on the ignorant commie Russell Brand.

"if I was in Government, Then I'd Government things much more differentlier, because it ain't the best way to government things so there's poor people everywhere" - Russell Brand in the song "We've Got To Do Something". I thought it was a parody, but it turns out to be his actual opinions.