Hizbollah is a cancer on Lebanon - the most heavily armed group in the country, out-gunning the Lebanese government - allied with Iran, and threatening both Israel and democracy in Lebanon.

It has constantly attacked Israel since Israeli withdrawal in 2000, and in 2006 it again attacked Israel without provocation. Hizbollah wants to bury the Lebanon revolution. The last thing it wants is liberal democracy in Lebanon. (It's the last thing Iran and Syria want as well.)

Everything about Hizbollah is contemptible, from their methods (attacking civilians) to their goals (destroying Israel, and enslaving Lebanon under Islamic rule). As long as Hizbollah exists, the conflict with Israel will continue.


As Bush said in his own Bush-like fashion: "See, the irony is what they need to do is get Syria to get Hezbollah to stop doing this shit, and it's over."
This actually sums up the Middle East problem in a nutshell. If the Arabs would stop attacking Israel, the problem would be over. There would be peace and prosperity. It's really as simple as that, and has been as simple as that since 1947. If you want peace, tell the Arabs to stop attacking Israel.
This does not of course work in reverse. If Israel disbanded its military and withdrew from the occupied territories back to its minimum possible borders, there would not be peace. The war would escalate. 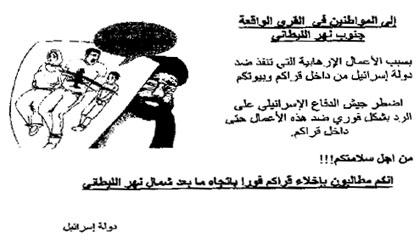 IDF leaflets dropped on civilian areas of South Lebanon to try to clear away civilians from Hezbollah positions.
They show Hassan Nasrallah and his human shields.
The IDF does not want to kill enemy civilians. You may not believe this, but tell me this:
Has any Arab (or Muslim) army ever tried to warn enemy civilians away from the war zone? Has this ever happened? Tell me here.


Proxy war with Iran and Syria

Iran and Syria have been at low-level war with Israel and America (e.g. in Iraq) for years. They just have been unable to provoke a full-scale war yet.

I'm more inclined to agree with the pessimists on this one, but I think the optimists are worth checking out. 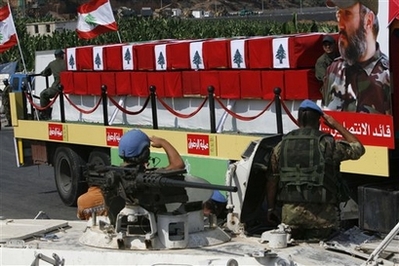 A picture paints a thousand words:
U.N. "peacekeepers" salute the coffins of Lebanese and Palestinian terrorists, July 17, 2008 (on a trailer with a picture of slain Hezbollah leader Imad Mughniyeh), in the Samir Kuntar prisoner swap between Israel and Lebanon.
And these pointless UN troops will "disarm" and "contain" Hezbollah. Sure.
AP Photo/Mohammed Zaatari.
See here.
Even worse, the commander of UNIFIL was due to appear at the Lebanese state "celebrations" for the returned Jew-killers. Disgusting. 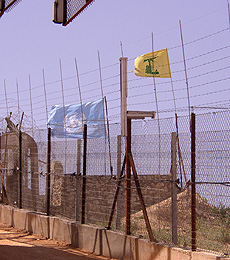 A picture paints a thousand words:
Hizbollah flag flies at U.N. compound on Israel-Lebanon border, 2002.
Photo by Paul Vallely. From here.
See Tell It to the Marines, Jed Babbin, 26 July 2002.