The British left-wing newspaper The Guardian is the most pro-jihad newspaper in the English-speaking world.

For years before 9/11, The Guardian was pro-gay, pro-atheist, pro-feminist, anti-nazi, anti-authoritarian, pro-sexual revolution and anti-censorship, but also hostile to Western power and interests - especially American, Israeli and British power and interests.

On 9/11, The Guardian was faced with a choice. America and the West are at war with Islamic religious maniacs who hate gays, atheists, women, Jews, liberal democracy, sex and free speech. Could The Guardian put its anti-Americanism aside to unite against a common enemy?

Sadly, no, was the answer. Ever since 9/11, The Guardian has been apologising for or even openly supporting the West's Islamist and jihadist enemies, even if they are fascists, and no matter what the contradiction to its supposed liberal beliefs. So much so that it even publishes these religious maniacs. It is now the best paper if you want to read right-wing religious fascism. But not for me, thanks. I stopped buying it in 2001. I will never stop criticising it. 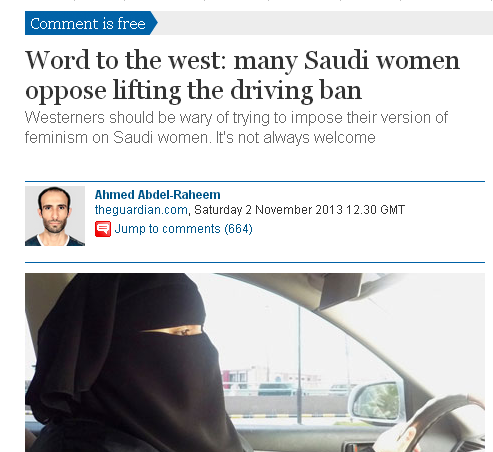 The Guardian, Nov 2013, defends the Saudi ban on women driving.
If you want a defence of right-wing religious oppression, The Guardian is for you.
But why would anyone who believes in liberal values buy this newspaper?
On principle, I will not buy it. I have not bought a copy since Sept 2001.

Hilarious piece in the Guardian, 16 Nov 2011.
If you too were "poor", and didn't fancy working, and "needed cash quickly", you too would plot to blow up Jewish synagogues and shoot down aircraft with missiles! Of course you would. We all would.
"Life is hard", so therefore ... I will kill Jews!
Have you guessed yet that this guy is an Islamic maniac? How do we know? Because the Guardian is making excuses for him. Can you imagine the Guardian making these excuses for a white supremacist plotting to do the same?

The Guardian, the paper of reactionary religious conservatism

The Guardian, the paper of reactionary religious fundamentalism, is called Al Guardian by the right.

Hamas in The Guardian

The Guardian, 13 February 2007, publishes the leader of Hamas.

The Guardian, 26 January 2011, publishes another Hamas terrorist.
One lovely reply to this enemy thug: "Perhaps Osama could tell us when the next Gazan elections will be?"

The Guardian, 8 June 2012, publishes the leader of Hamas in Gaza.
Ultra-right-wing, anti-semitic, religious fundamentalists are cool - if they are third world people.
Why would any liberal buy this newspaper?

The Guardian's bias on Israel

Obviously we could not possibly cover the entire ocean of hatred directed at Israel by The Guardian for decades. But here are a few examples of spin in the news section (separate to the hatred in the opinion section).

The Guardian spins the news, 14 March 2011, as it reports on the barbaric killings at Itamar.
It claims that the Palestinians are shocked by the killings.
No evidence is presented in the article that this is true.
Noted here.
(In fact, there were some Palestinians who were shocked, but there is no evidence that Sherwood or the Guardian knew of their existence.)

The Guardian's support for the Iraqi fascist "resistance"

The sickest thing ever written in The Guardian

In between the endless support for third world fascist thugs fighting to enslave their own peoples, it is hard to single out any one piece in The Guardian. But here is one candidate.

Before we see his article, first we consider the brave Iraqi interpreters working for the allies in Iraq. These true heroes of Iraq are risking their lives to bring democracy, human rights and the rule of law to their country. These real Arab heroes risk a terrible death for them and their entire families, including their children, if the forces of totalitarianism and religious fundamentalism win. To any leftist, it is a no brainer: These men and women are heroes - fighting for human rights against people who do not believe in human rights. They are the people in Iraq who share the western left's values. They are the people in Iraq that the western left should stand beside unconditionally. And yet, blinded by hatred, many on the left don't see it that way.


OK, are you ready now? Now I can present you with my candidate for the sickest thing ever written in The Guardian. (And what a contest that would be.) Note that it seems this piece was only on their website, not in the paper:

From Hitler to Lenin to Trotsky to Stalin to Khrushchev to Mao to Pol Pot to Castro to Ho Chi Minh to Saddam Hussein to the Ayatollah Khomeini to the PLO to Hamas to Hezbollah to Milosevic to Al Qaeda to the Iraqi resistance - It seems that every single evil in the world has been supported by at least one western intellectual. It doesn't seem to matter what bleak, grinding totalitarian vision you are fighting for, or what staggering, inhuman barbarisms you commit. There will always be at least one western intellectual willing to call you a "hero".

Left-wing spin from the Guardian

I mostly stick here to covering actual support for fascism by the Guardian. Accounts of just left-wing, anti-US, anti-Israel, pro-Arab, pro-Islam spin could go on forever. That's what they do. I have dozens of examples throughout this site.

Andres Serrano's photograph "Piss Christ", which has been upsetting Christians since 1987, is attacked by Christian protesters in France on 17 Apr 2011.
Oddly, the Guardian, 18 Apr 2011, does not blame Serrano for "enraging" the Christians.
They do not demand that Serrano expresses "regret".
Unlike with Jones, they let Serrano off the hook. In fact, they blame someone who has nothing to do with either the art or the protests - President Sarkozy!

How the Guardian did not report the attack.
(I am not saying they should have reported it this way. I am pointing out how absurd is their double standard on Islam.)

Parody of every Guardian article on Islam ever

Like the Guardian, the left-wing New Statesman is also in love with conservative religious reactionaries. Provided they come from "Religions that their parents don't belong to".

Alright, provided they come from Islam. 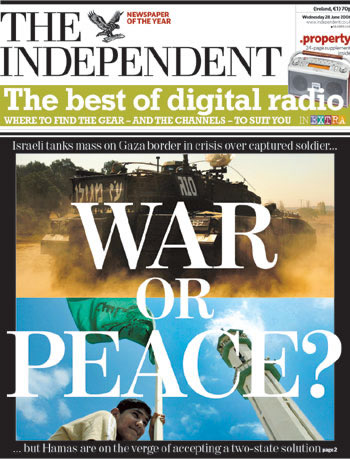 "Orwell's Newspaper" - Charles Johnson (when he was good) on Robert Fisk's newspaper The Independent, June 28, 2006.
The Israelis, who only want (and only ever wanted!) to live in peace side by side with the Arabs, are represented as the camp of "War".
Hamas, who want to war without end until they have exterminated or expelled every Jew from Israel, are represented as the camp of "Peace". 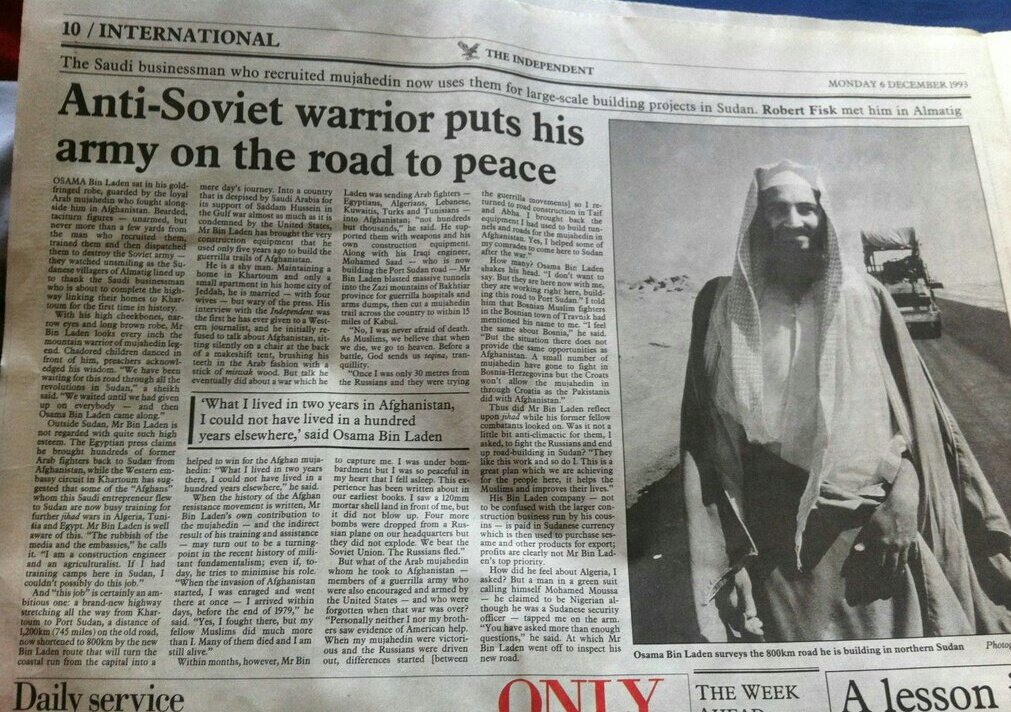 "Anti-Soviet warrior puts his army on the road to peace".
That's how The Independent titled an interview with Osama Bin Laden by Robert Fisk in Sudan in 1993.
Oh you really get the insights into the future at The Independent!

Darius Guppy in The Independent


"Imagine, if you will, someone who read only "Reader's Digest" between 1950 and 1970, and someone in the same period who read only "The Nation" or "The New Statesman". Which reader would have been better informed about the realities of Communism? The answer, I think, should give us pause. Can it be that our enemies were right?"
- A 1982 confession of doubt from Susan Sontag. Quoted here.
The same could be said about the Guardian. Yes, it is high-brow. But who, after all these years, and all those sophisticated whitewashes, understands Islamism and jihadism better? The simple Daily Mail reader, or the "nuanced" and morally-ambiguous Guardian reader?

"The KGB loved the Guardian. It was deemed highly susceptible to penetration."
- Soviet defector Oleg Gordievsky on the Soviet Union trying to recruit agents at The Guardian during the Cold War.
Guardian literary editor Richard Gott was claimed to be a KGB agent. He disputes this.