Like state-run RTE in Ireland, the state-run BBC in the UK spins the news to the soft left on the taxpayers' money.

The anti-neocon BBC polemic "The Power of Nightmares" (2004) by Adam Curtis.
See review: The Power of Bad Television, Clive Davis, October 21, 2004: "It is a sign of how fevered political debate has become in Britain's media-land that such lurid, Michael Moore-ish notions are given a prime-time slot on the channel that once gave us Kenneth Clarke's Civilisation."

The BBC has a soft pro-left, pro-Arab, anti-Israel, anti-America and anti-west bias. The problem isn't BBC bias per se - It's the fact that people are forced to pay for it.

If the BBC was private (like Sky and Fox) this bias would be fine. It's the fact that people are forced to pay for it that so angers people. 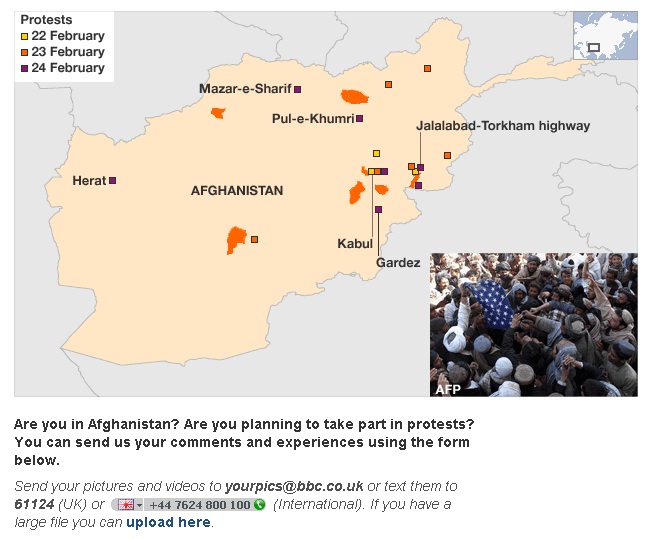 I was going to link to this BBC map of the Afghan "Koran burning" riots of Feb 2012 to illustrate the lunacy of the rioters.
And then I noticed the BBC are asking protesters to send in footage!
That is, they are treating the protesters as if they are not mentally insane.
"Are you in Afghanistan? Are you planning to take part in protests?" "Then you are a complete lunatic" is what the BBC should say.
But that would be a different BBC, a BBC that took the side of good against evil. 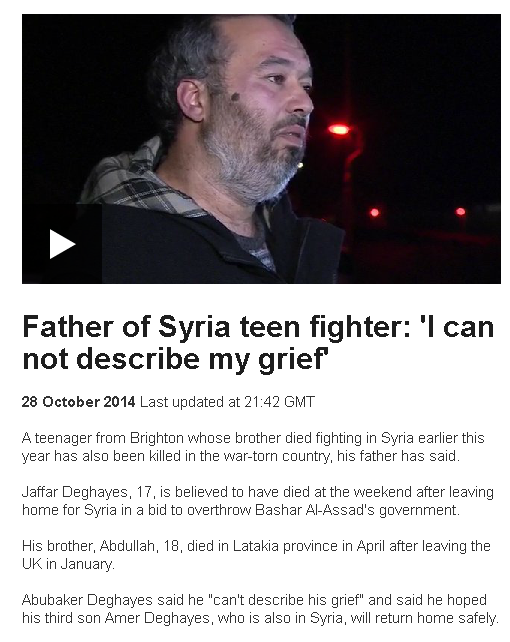 WTF? British jihadi dies fighting for Al Qaeda in Syria, Oct 2014, and BBC weeps for him.
Richard Littlejohn compares the story of the two dead brothers to Saving Private Ryan, and finds a difference: "Unlike the fictional Private Ryan, the Deghayes boys weren't fighting fascism, they were fighting for fascism."

Sunday Worship ... of Obama!
The BBC and Church of England unite to produce "Learning to Dream Again", a service of worship of Obama at his second inauguration, 20 Jan 2013.
As the blogger "Archbishop Cranmer" says: "Did they ever do this for President Bush? Margaret Thatcher? Or even David Cameron? Is it only Socialist-Democrats who are deemed worthy of a national BBC broadcast in the context of prayer and divine worship? ... Would thay have commissioned a special anthem (at what cost and met by whom?) if we now had a Republican back in the White House?" 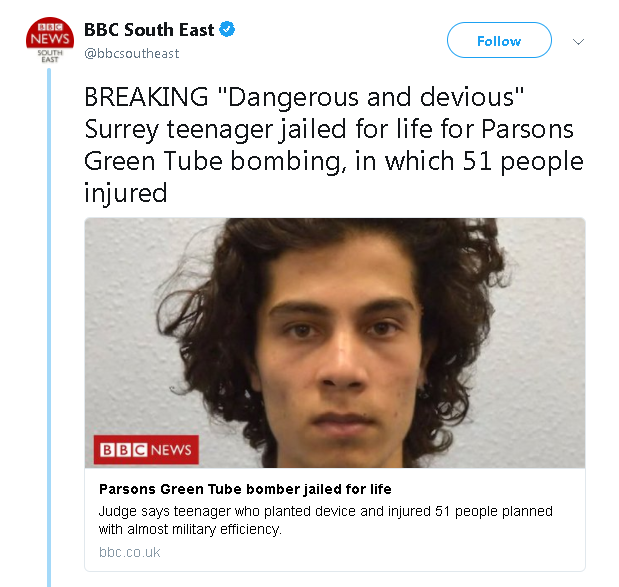 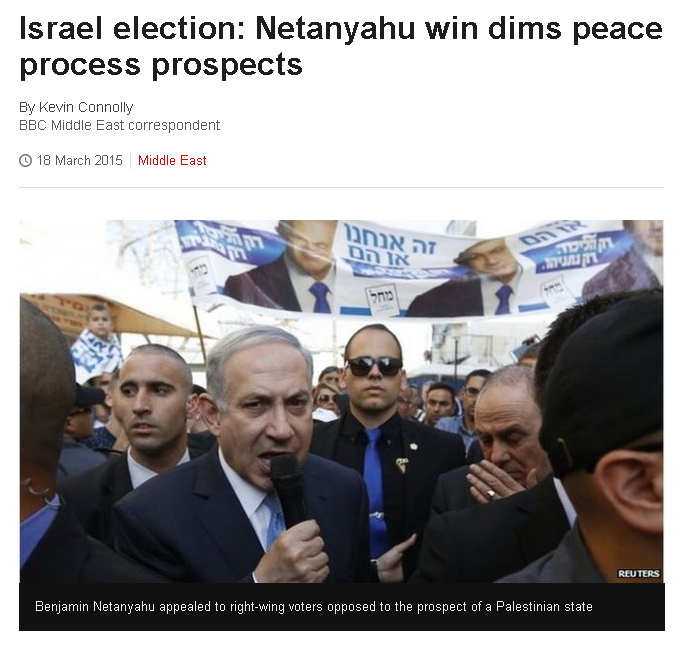 Naked, open bias against Netanyahu from the "impartial" BBC, March 2015. 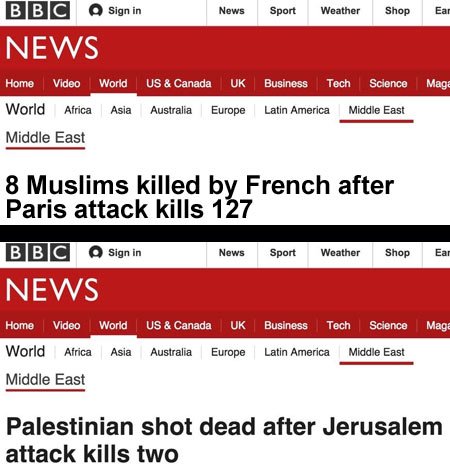 Someone suggests how the BBC might cover the Paris terror attacks in Nov 2015.
The lower headline is real and from Oct 2015. 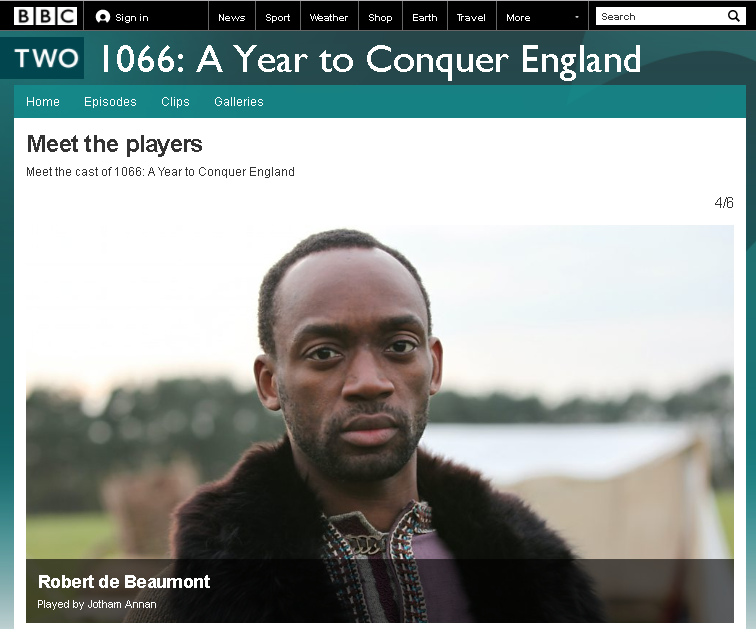 John Humphrys is probably the most prominent face of the soft left bias of the BBC. It would be fun if he was related to me but he is not. Not in the last 300 years anyway.

Believe it or not, the children's news program Newsround (formerly John Craven's Newsround) has a predictable left-wing bias.

What a load of leftie propaganda! Why not say to the children:

If you can't see my point, consider the following:
Which would be the better explanation by the BBC during the Second World War of why the Nazis were attacking the Jews? This:

The BBC's section on religion and war in its GCSE Religious Studies notes is simple Islamic propaganda for children (as at 2012). 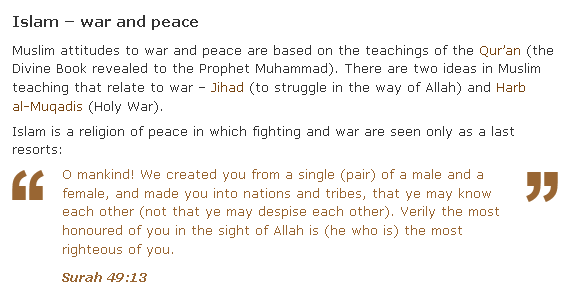 Page 3: "Muslims may fight in self-defence but are forbidden to begin a fight."
Rubbish. Almost all Muslim war and terror is aggressive - to impose sharia law.
"The aim of fighting is to create a situation where Muslims are free to worship Allah and live in peace.".
Rubbish. The aim of fighting is to impose sharia law (i.e. end religious freedom).
"One aim of Holy War may be to create a democracy where people are free to live their lives without beliefs and politics being imposed on them."
What?? What is this person on?? When has that ever happened? Name just one time in human history when that has ever happened - when the aim of Holy War was to create a democracy or a place with religious freedom. The aim of Holy War is always to oppose these ideas!

This ludicrous BBC program was designed to assure us fear-gripped Islamophobes that there is no Islamist threat, and it is all lies cooked up by the media, or the neo-cons, or somebody.

Why I often prefer blogs to the BBC

Muslim supremacists attack innocent Christians in Nigeria for no reason, May 2011, killing 17 including an entire family.

The BBC hides the news.
Everything is passive voice.
There is a vague clue that "Hundreds have died in clashes" since a Muslim lost an election, but they won't explain further.

The most ludicrous BBC article of all time

The article never mentions Islam once, but it does find time to mention Brexit (!) as a threat to the West.

But this is the best bit:
What makes this article a true masterpiece is that it blames the Syrian war on climate change and capitalism.
Yes that's right. The Syrian war - involving a democidal Baathist dictatorship, blood-soaked Sunni jihadis from the Iraqi "resistance", the mass murdering Shia regime of Iran and its terrorist proxies Hezbollah - was caused by climate change and capitalism!
"Capitalism" is real genius here. Syria is one of the most statist countries on earth.
The BBC can surely never produce anything more ludicrous than this article.


The Channel 4 documentary Islam: The Untold Story (2012) by Tom Holland. 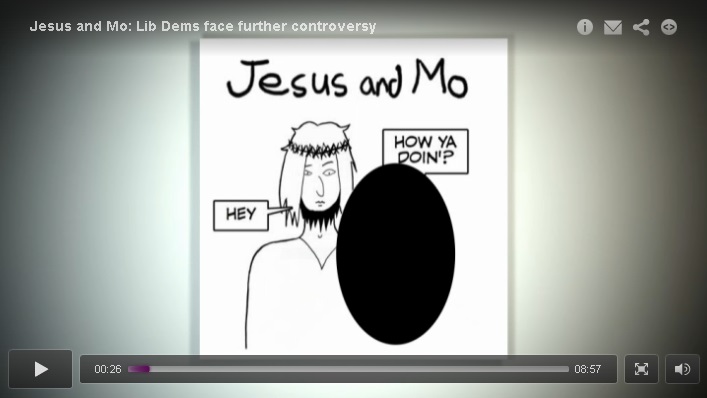 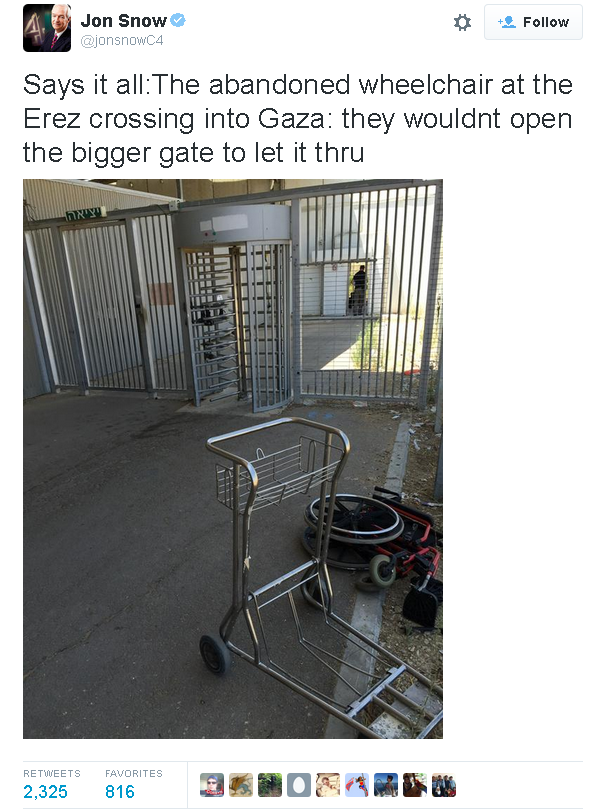 The anti-Israel Jon Snow of Channel 4, 8 July 2015, tweets a picture of a wheelchair at an Israeli crossing and claims Israel would not let it through.
Over 2,000 retweets, but zero proof is provided.
In fact, it seems likely that it is an emergency wheelchair for general use at the crossing.
"Says it all" about Jon Snow and Channel 4.

"UKIP: The First 100 Days" (at 27:45) takes a swipe at Israel.
Socialists and communists (again) protest UKIP as "racist".
There is a counter-protest: "By the afternoon, some far right demonstrators were trying to disrupt the march."
And the only sign visible is an Israeli flag.